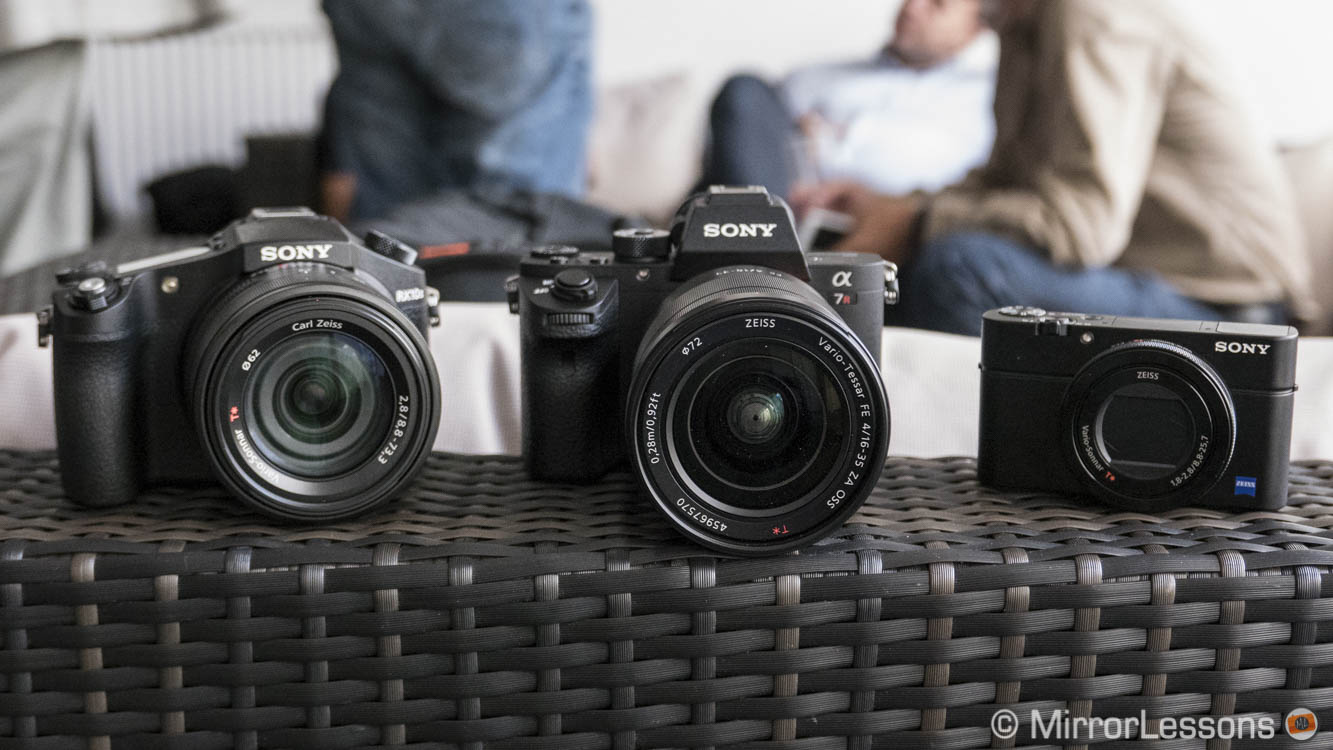 During the press event at Pinewood Studios near London, we had the chance to sit down with two managers from Sony Europe, Yoma Hori (Product Manager for Interchangeable Lens Camera Digital Imaging) and Ryoko Noguchi (Product Manager for Digital Still Camera/Lens Style Camera Digital Imaging). We talked about the recently released A7r II, RX100 IV and RX10 II as well as the other mirrorless cameras from Sony.

ML: Let’s start with a purely technical curiosity: why 42MP instead of say 46 or 50MP? Does it have something to do with the Super35mm crop mode for 4K recording?

YH: I would say this is not purely about the resolution but a balance between resolution, sensitivity and also the speed. I think that 42MP is a high enough resolution on the current market. And of course it is related to the 35mm movie recording but it’s not a restriction. 42MP is enough for professionals in this era and it is the best balance.

ML: Was it more difficult to calibrate the 5-axis stabilisation of the A7r II sensor in comparison to the 24MP sensor on the A7 mark II?

YH: Yes, it is more complicated and tough process to calibrate because compared to A7 II, it has almost double the number of pixels on the image sensor and to actuate this image sensor, we are using magnetics. These magnetics are complicated to actuate so the processing and calibration is more enhanced but at the same time, we are achieving the same 4.5 step compensation. This is why we call it the new in-body stabilisation system optimised for this camera.

ML: Could we say that the performance of the 5 axis stabilisation is the same on the A7 II and A7r II?

YH: The amount of compensation is different from lens to lens and focal length to focal length. So we can’t say it’s exactly the same but if we think about the difference in resolution, the A7r II image stabilisation unit itself is more advanced and complicated.

ML: The Super 35mm crop mode of the A7r II for video makes the camera a relevant option for serious filmmaking. Won’t this make it a direct competitor of the A7s since the latter can’t record 4K internally?

YH: It does compete with the A7s but on the other hand, in the cinema field, the target users are quite different and there are many types of cinematographers. So for people who can accept the external recorder, the A7s is the better choice because it does full pixel readout without binning for all the formats. But the A7r II is the first camera with a full frame sensor that does 4K recording internally. So for people who want to use it for drones and 4K recording, the A7r II is the best choice because the camera can use the entire field of the lens and record 4K movies internally. And also people who want to shoot 35mm format 4K movie, the A7r is the better choice because it records internally.

ML: The new autofocus system on the A7r II allows for an easier use of A-mount lenses even without the LE-EA4 adapter. This means better compatibility with A-mount lenses, so we could actually call the A7r II a “hybrid” camera. Is Sony still planning to continue with the development of the DSLT line in the long term?

YH: I would say, yes, we can call it a hybrid camera because this is the first attempt to fully use the functions of the camera with the mount adapter. But the SLT cameras still offers some advantages like longer batter life, better grip, and whole functionally is still like DSLRs. We believe customers are still there and that they will love these DSLT cameras. We can’t comment on future products but we are still continuing to produce these A-mount cameras.

ML: The only imaginable limit on the A7r II is battery life, at least based on our experience with the A7 series. Will it be possible to have batteries with a longer life in the future without increasing their size?

YH: The image sensor and processing are the energy consuming parts and we are quite rapidly developing these two parts internally. So like I said, this Exmor R CMOS sensor is a newly developed sensor and every year, we are developing a new sensor. So with this developing speed, another goal is to use less energy but achieve a higher performance. I would say it’s possible.

ML: The A7r II, RX100m4 and RX10m2 are the first Sony cameras to include internal 4K recording. Some competitors have been pushing this technology not only for video but also for photography. What do you think about 4k Photo?

RN: Basically 4K photo is extracting some photos after shooting a movie from the movie output. But our dual recording function is simply taking a picture while shooting a video. That’s why we have achieved 17MP high resolution for taking a photo. It only produces a JPG, not a Raw file.

ML: The RX100 IV has a very interesting option called Anti-Distortion shutter to minimise the rolling shutter issue. How does it work exactly?

RN: The anti distortion shutter works thanks to the new Exmor RS sensor’s fast readout processing speed. It scans the subject image line by line and there’s a time gap between the top and bottom, and that causes distortion in a picture. However thanks to our brand new image sensor, we can read out a subject with a smaller time gap in scanning, so this can reduce distortion drastically.

ML: Will this feature expand the potential of semi and full electronic shutters?

RN: It is for Exmor RS sensors, so as long as there is Exmor RS with DRAM, there is a possibility to implement this function to electronic shutters.

ML: If my understanding is correct, the DRAM chip introduced in the RX100m4/RX10m2 sensor makes it possible to extend the capabilities of the engine processor. Can this technology be implemented on bigger sensors?

RN: There is a possibility for the future but we can’t answer now.

A7 Series and Various Questions

ML: Many users wish to have an uncompressed Raw option on the A7 series. Why hasn’t it been implemented yet?

YH: I’ve heard of this request. If there is a high demand, we can consider developing it in the future.

ML: Since both the A7s and the A7r II have the possibility, why hasn’t an electronic shutter option been implemented on the A7 II?

YH: Well, technologically the sensor needs to be compatible with this function. The A7rII and A7s have a unique sensor, so it’s been developed with a silent shooting function already included, but the A7 II sensor doesn’t have this function unfortunately.

ML: More competitors are releasing substantial firmware updates to their cameras and customer reception seems to be really positive. Is it something that Sony can consider in the future?

YH: Yes, we are continuing to release firmware updates. Yesterday we launched a new firmware. This is for the A7, A7r, A7s and A6000. For the A7 series cameras, the start-up time is now faster. This is a common complaint from the consumer. 1 1/2 years after their launch, we still update these cameras and for the A6000 we can do XAVCS movie recording.

ML: We now have a successor for both the A7 and A7r so logic would have it that the next in line is the A7s…

YH: I hope so. *laughs* Of course I cannot comment but you can imagine, before today, the people wanted in-body stabilisation for the A7r. That was the most frequent feedback from the consumers. So we made this A7r II with even higher resolution. But I cannot comment on future products.

ML: Thank you both for your time!