You are here: Home / In Depth / Is the Fuji X-T2 dynamic range really that good? – A personal analysis 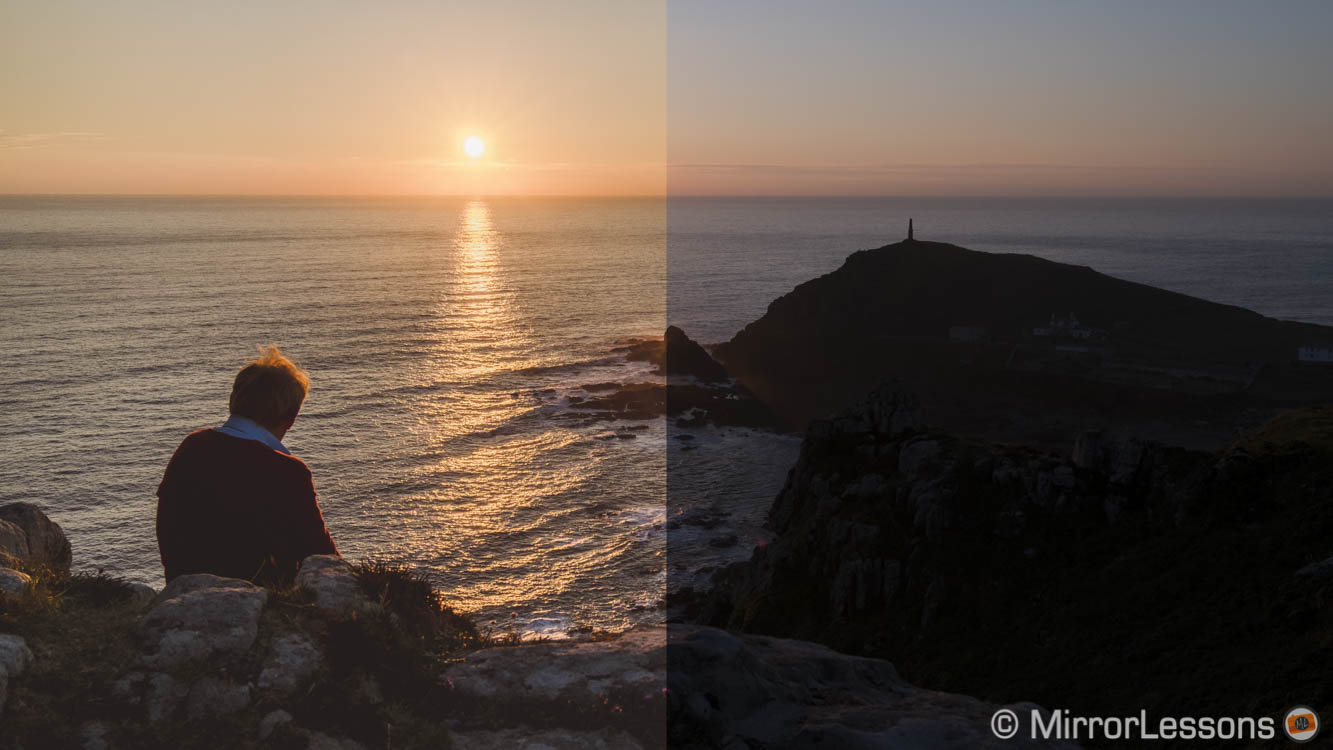 The new Fujifilm X-T2 was announced two days ago and as usual the hype at the moment is really high. The new camera is making the cover of many websites, magazines and blogs. One of the articles that went viral was published on Thursday by Petapixel. It shows a 2 full stop recovery in Lightroom of a beautiful landscape shot taken by Fuji ambassador and popular travel photographer Elia Locardi.

Many were impressed by this result, while others were more sceptical, saying that the same is possible with other (even cheaper) APS-C cameras. I decided to dig a little bit more into the matter to see if the most recent X-Trans sensor is really that great or if similar results can easily be obtained with other cameras as well.

Important note: this article is a personal analysis inspired by Elia Locardi’s post (you can also check his X-T2 review on his website). I don’t mean to discredit his words in any way or trigger some sort of “battle” between blogs.

Ethics statement: We purchased the X-T2 to conduct our full review. We were not asked to write anything about the camera, nor were we provided any other compensation of any kind. Within the article, there are affiliate links. If you decided to buy something after clicking the link, we will receive a small commission. Don’t worry – prices remain the same for you. To know more about our ethics, you can visit our full disclosure page. Thank you!

The Fujifilm 24MP X-Trans III CMOS sensor: how far can we push it?

I haven’t had the chance to try a Fujifilm X-T2 yet but the sensor and image processor are exactly the same as the ones found inside the X-Pro2 that I currently own and that I reviewed in-depth on this website. So I am going to analyse some of my X-Pro2 images, knowing that the results are identical to the X-T2.

First I would like to say that the dynamic range performance of the X-T2 doesn’t surprise me. In my X-Pro2 review I stated that many times that a single file gives you enough versatility to not bother with AE bracketing and HDR. Here is an example that demonstrates this:

However in the example above I had a slight advantage. Because the light was partially softened by the thin clouds, it was easier to take a more balanced exposure and adjust everything in post later.

So I went through my Lightroom catalogue to find an image that could match more or less the one shared by Elia. Of course the location is not the same (mine is Cape Cornwall in South England) but the light conditions are more similar (sun near the horizon at sunset). The first picture shows the exposure straight out of camera.

I exposed for the sun to preserve the highlights but by doing so, I sacrificed the details in the shadows. How much can I recover then? Here comes the post processed version. I applied the same settings that Elia shows in his article, then made a few more changes to optimise my shot since the conditions were not exactly the same.

If we take a closer look at the shadows, we can see a little bit of noise but I would say that the level of detail is good. Note that here I set the noise reduction to 0 on purpose so that there wouldn’t be NR applied by Lightroom.

Now let’s have a look at the same scene but with a middle ground exposure that balances shadows and highlights better. Here I sacrificed some details in the highlights. Then we have the post processed version where I tried to recover the highlights and give an extra boost to the shadows to match the same result as the first image.

The first thing we see above is that I couldn’t match the same result concerning the highlights. Perhaps one stop of difference between the two exposures instead of two would have worked better (that evening I was shooting in AE bracketing mode with a ±2Ev difference). If we take a look at the same crop and compare it to the one seen before, we notice less noise. This makes sense since the second time I exposed the sensor to light for a longer period of time.

Now let’s add some noise reduction to the first image to see if we can improve the result and match that of the second exposure. The image improves a little but the second example still retains more detail in the shadows.

The first conclusion we can draw is the following: if you want to make sure to preserve all the highlights, you need to expose on the left, recover the shadows in post and accept some noise as a consequence. Highlights are weaker on digital sensors and while the X-Trans sensor does a good job indeed, you have more versatility with the shadows (this is a general rule for all digital cameras really).

Can I push the dynamic range even more than 2 stops?

What happens if I attempt to perform a more drastic recovery in post production? Let’s see a few examples below, the first being of the same Cornwall scene but underexposed even more.

As you can see the amount of noise increases, as does the loss in detail. Even playing with the noise reduction doesn’t solve the problem. The picture might still look good decent for the web or small prints but for bigger prints it won’t work as well as the other two examples shown before.

This tells us that it is important to know how far you can push the files of your camera and not take for granted that the dynamic range is just “amazing” without knowing its limits. It is also important to know that there are situations where you can push the files more than others. Exposure in photography involves some general rules but then it is up to the photographer to analyse the light of each individual scene and choose the appropriate settings.

In the two final examples below, the amount of recovery surpasses three full stops. We can notice noise in the first image but it is less invasive than the image above. In the last image, there is noise on the wooden wall but it is even less noticeable.

Are the X-T2/X-Pro2 better than other cameras?

With all these mirrorless cameras popping up like “champignons” (French word for mushrooms) it is inevitable that we’ll wind up comparing their performance. One advantage of the X-Pro2/X-T2 is the ability to shoot lossless or uncompressed RAW. The difference between the two settings is hard to detect most of the time but for heavy post-production the latter is always advised.

Not every mirrorless cameras shoots uncompressed RAW and that’s where Fuji cameras can have an advantage.

In our Sony a6300 vs X-Pro2 comparison article, we showed that the Fujifilm camera was capable of retaining cleaner shadows (without any NR applied) in comparison to the Sony camera when recovering shadows. Even with some tweaking to the NR, the Fuji file performs better.

If the a6300 had an uncompressed RAW option, I am pretty sure that the results would be as good as the Fuji file if not even better since the a6300 is slightly sharper. That’s the same conclusion we came to when Sony implemented uncompressed RAW on the A7r II (read the article here).

Finally, I browsed through some older images shot with previous mirrorless camera models (APS-C and micro four thirds) to show that it is possible to achieve good results with many of them. Of course not all cameras perform in the same way as you will see but it’s just a reminder that good dynamic range starts with a good exposure and not just the sensor capabilities. This is why I wasn’t particularly impressed by Elia’s result, since recovering 2Ev is not unheard of. Actually, going back to some of the Samsung NX1 files reminded me just how good that 28MP BSI sensor is (it’s a shame that the Korean company is pulling the plug on its camera business).

Last but not least, the best result will always be achieved with the HDR technique and this becomes even more important if your sensor isn’t as good as others.

If I go back to the first example shown with the X-T2 and compare the single post-processed RAW file with the HDR version, we can see how the shadows look cleaner and I didn’t have to sacrifice the highlights.

Conclusion: it’s always about light in the end

To be fair to Elia Locardi, he is not wrong in his conclusion. The X-T2/X-Pro2 have an average of 2 stops of recovery that can be achieved without spending too much time in front your computer screen. That to me is proof that the camera has a good sensor.

However it is also true that other cameras can perform equally well and I managed more than once to achieve good results with cameras that have a smaller sensor like micro four thirds. Most of the time it is also a question of photographing at the right time with the right light. There will always be some noise but what matters is how invasive it is, how much you can reduce it in post and, perhaps most importantly, how sensitive you are to it personally.

How far do you feel you can push the files of your mirrorless camera? Let us know in the comments section below!