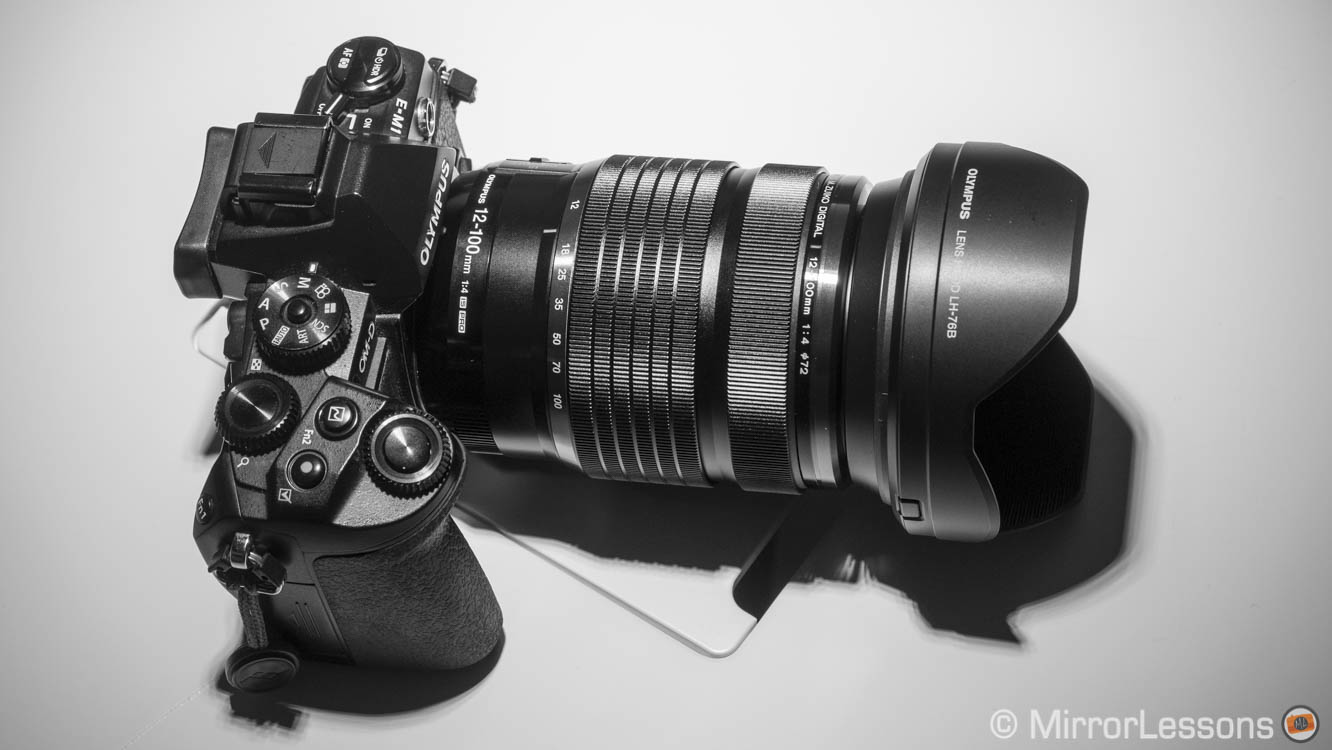 One of the most difficult tasks when a new product is announced is to gather precise and correct information about the various specifications and minute details in a very short period of time. In fact, even some of the things written in the press releases and specification sheets can lack some precision. This can result in some confusion (and we are not immune to it!).

Update: check out our extended second impression review with continuous AF tests and much more!

This is why we went back to meet with Olympus a second time to ask more in-depth questions about the OM-D E-M1 mark II and clear up any confusion about the new camera. We also took note of the questions we have been receiving here on MirrorLessons, on our YouTube channel, and via email / our social media networks. Below you will find all the details we are able to gather. Please note that we couldn’t double check all the answers by trying out the camera. It’s still a pre-production model and once again, time with it was limited.

With the mechanical shutter, the E-M1 II can shoot up to 15fps in High mode but the AF is locked at the first frame. It doesn’t matter if you have Continous-AF selected.

If you want continuous autofocus, you need to select the Low continuous shooting mode and the maximum speed is 10fps.

I apologise for sharing the wrong speed information for C-AF in my hands-on video. Since the E-M1 with firmware 4.0 enabled continuous AF with the High mode, I assumed the E-M1 II would do the same. The E-M1 II has gone back to the original settings. To be extra clear:

With the electronic shutter (a.k.a. silent mode), the speed goes up to 60fps with AF locked at the first frame and 18fps in C-AF.

All the speeds are available in RAW. At 60fps, the camera can shoot for longer than one second and how long it can go will depend on the buffer capabilities and the memory card. Olympus hasn’t disclosed the buffer specifications yet. Of course the best performance will be found with the fastest UHS-II memory cards.

The new AF system is also capable of detecting moving subjects automatically and choosing the appropriate AF points (similar to the 4D Focus of Sony cameras).

In addition to All Target, single and the 9-Target group AF points, there is also a new 5-point group area.

In my first impression article published the other day, I expressed my concern about using the electronic shutter at 18fps with fast moving subjects. Olympus didn’t mention anything about rolling shutter improvements during the presentation so I asked for additional information.

The E-M1 II improves rolling shutter correction in comparison to the E-M1 thanks to a faster sensor readout and the new TruePic VIII processor. However it’s not completely gone: they explained that animals at a distance shouldn’t be a problem while a fan or propeller spinning will still be affected. 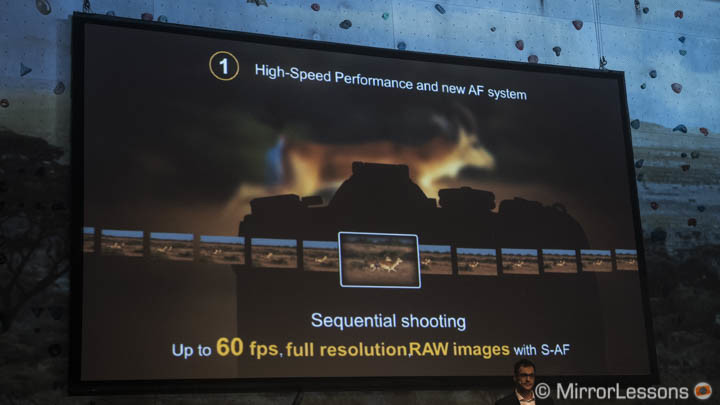 Of course we have to see in a real world test how much the rolling shutter has been minimised. However if shooting wildlife and birds in flight at a distance is rolling shutter free, this is really great news. It also means that we’re one step closer to getting rid the rolling shutter issue altogether. For example, Sony did an excellent job with the RX100 IV / RX10 II and III and the Stacked CMOS sensor.

The various brands are apparently working on global shutter and the possibility of getting rid of mechanical shutters in the future.

This mode allows you to capture up to 14 frames when you half press the shutter release button, eliminating any issue with shutter delay. This mode uses the electronic shutter. 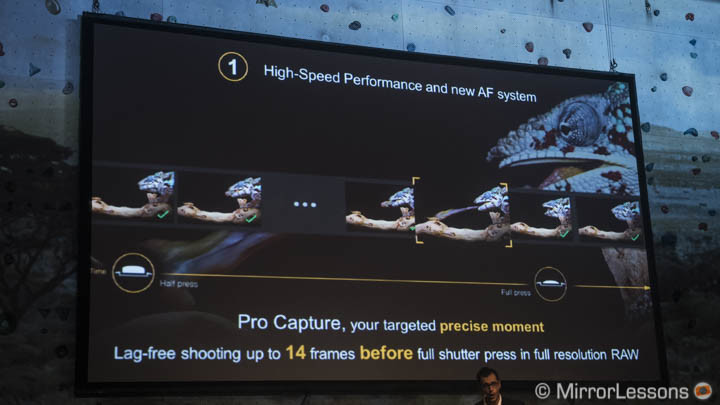 The E-M1 II comes with several new AF settings. Let’s have a look at the most important ones.

It allows you to control the back and forth movements of the lens elements. There are three modes available:

This is a feature you often find in the form of switch button on telephoto lenses. With the E-M1 II you can customise the distance in-camera and three presets are available. You can also select focus or release priority.

What’s interesting about this setting is that it could also be used as a more advanced version of the Snap Focus mode found on the Ricoh GR. If you select a short gap between the minimum and maximum distance (like 2m and 4m), you can use it for hyperfocal distances with the correct aperture. Street photographers might love this feature. However they told us that the distance set is an approximation so we’ll have to see how precise this mode is. It will work with any AF Micro Four Thirds lenses.

This setting is available on the original E-M1 but instead of choosing between Low, Normal and High, you have a total of four steps (+2 to -2) ranging from Loose and Tight. 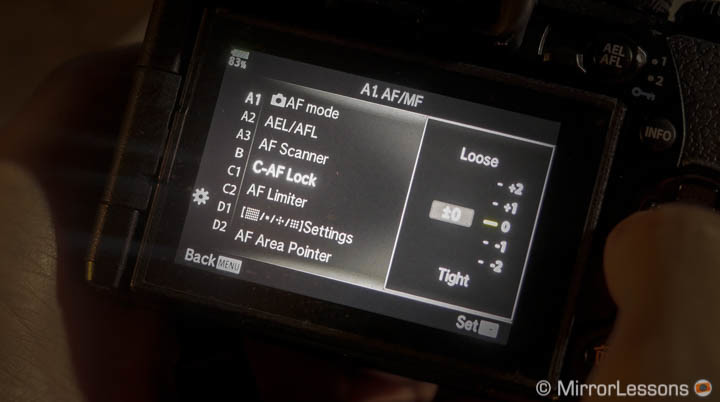 Available on the E-M1 as well but you can only choose between On and Off. On the E-M1 II, you have the following options:

New to the E-M1 II, it allows you to select a focus distance that the camera sets when you switch to manual focus. For example if you are doing astro-photography, you can set it to infinity so that the focus distance is already close to where you want it to be and you just need to make some final adjustments. 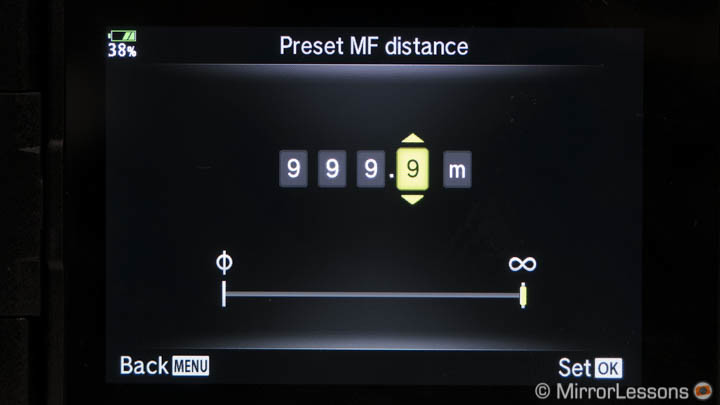 There is no sensor crop for both UHD and Cinema 4K unless you activate digital stabilisation in addition to 5-axis IS (8% crop).

We couldn’t get an answer about full pixel readout: that information is not yet available. I see two possible options:

Continuous AF will be available with the same features as for stills. You can vary the exposure while recording.

The E-M1 II’s EVF has a fast 120fps refresh rate but that same speed is also available on the E-M1 if you select High for the Frame rate option (Custom Menu D). However, by doing so, the resolution of the EVF decreases.

The E-M1 II will have 120fps at full resolution. One thing remains unclear and that is whether 120fps is the default speed. The camera has the same Frame Rate settings in the menu (Normal / High) but we couldn’t get an answer about which one refers to 120fps.

We double checked on an E-M1 II sample and unfortunately this option is not available.

The US press release confirms the setting is available. Quoting the text:

“Lowest Shutter Speed Setting on the camera will allow users to predefine a minimum shutter speed so that the ISO sensitivity will increase in low-light situations rather than slowing down the shutter speed. This is convenient for handheld shooting in low-light environments.”

As you have already noticed, the design is new. However, the organisation remains more or less the same: two Shooting Menus, one Custom Menu, one Playback Menu, one Setup menu and the Video Menu which is not buried in the Custom Menu anymore.

Some settings have been relocated as well. For example, the Card Setup is now in the Setup menu and not the Shooting Menu 1.

You will be able to save all your camera settings on your computer and re-apply them to the camera. This means you won’t lose your settings when you update the camera firmware. It can also be useful if you are shooting with two or more cameras in order to have the same settings across the board.

When you set the time in the Setup Menu, the seconds will also be displayed. A smartphone app will allow you to sync time between different cameras to make sure you have the same exact time if you are using more than one camera. 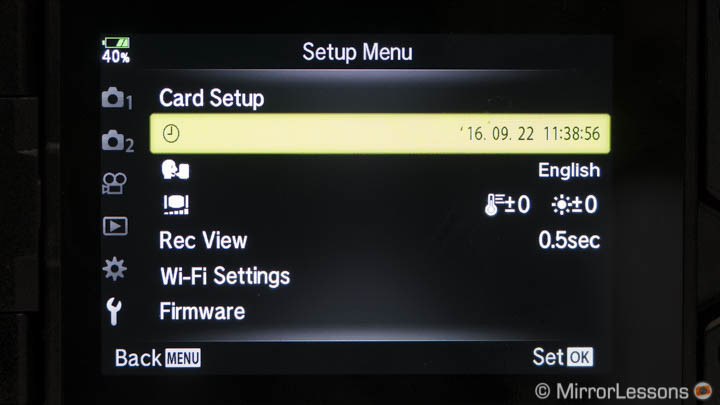 There will also be a new mobile app that allows you to crop, rotate and apply Art filters to the image you transfer.

The old E-M1 (BLN-1) batteries won’t be compatible with the E-M1 II. As you can see in the picture, the new battery is definitely bigger. Olympus told us that the new E-M1 II doesn’t consume much more power than its predecessor so there seems to be a big gain in battery life indeed (approximately 40%).

The new BLH-1 is also capable of storing some data related to the battery performance. In a specific submenu, it will tell you how many shots are left, how healthy the battery is and how much of a charge remains. If you put that same battery in a second E-M1 II camera, this information will be preserved and passed on to the second camera. So you can swap batteries between different E-M1 II bodies and each battery will always retain its own information.

Finally many of you asked if the E-M1 II can be charged via USB: unfortunately, it cannot.

The new service announced by Olympus has three options and is available in Europe only. However there is a Pro service available in the US and another one in Asia but they are different. Basically the Pro service is not worldwide but run independently in different areas.

We hope we managed to answer most, if not all of your questions about the E-M1 II. Now all that’s left is to wait for the final production sample to arrive! 🙂