You are here: Home / Best Of / Which Olympus camera should I buy? – Demystifying the OM-D and Pen series 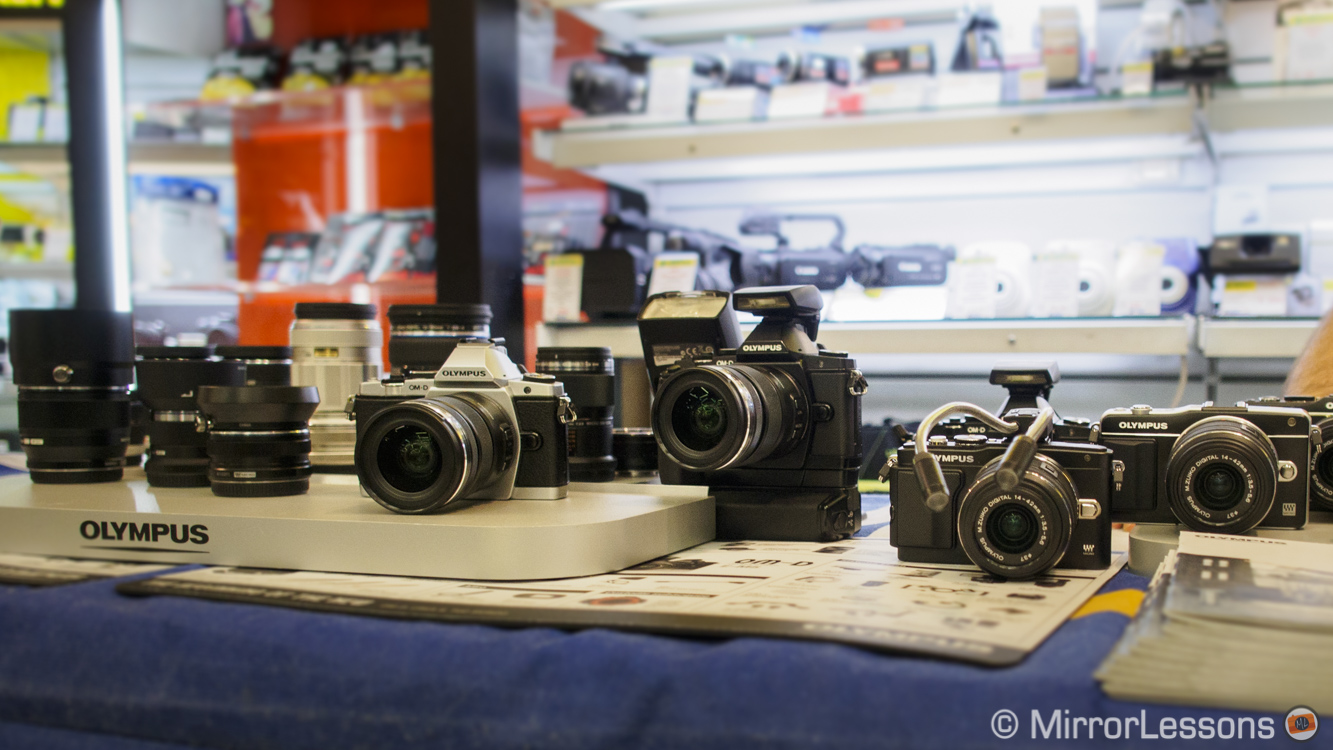 Too much choice–it is a pandemic of the modern age, and is no less prevalent in the digital camera industry than in any other. A little over a generation ago, your analog camera would have lasted five years before being ousted by a newer version. Today a digital camera is lucky to have a shelf life of six months before rumours of something bigger and better begin to whittle away at its value.

And what does this continuous game of “produce and replace” leave us with? Dozens upon dozens of similar camera models to choose from, and very little understanding of which to buy. This excess of choice is often both demotivating and daunting, especially when the differences between the various models are ambiguous or even non-existent. In many cases, consumers faced with too many options will either allow somebody else to choose for them, or fail to choose at all.

It is for this reason I’d like to take the time to demystify the mirrorless camera line-ups for each brand. We decided to start with the Olympus Micro Four Thirds series, one of our favourite mirrorless systems. Though it is presently one of the least saturated brands, the company is continually expanding with new cameras that don’t necessarily replace previous models. It is little wonder that potential consumers can have a tough time pinpointing the most appropriate model for their needs.

A taste of Olympus history

To begin, it is worth explaining that Olympus’ mirrorless cameras are divided into two main categories: the professional/semi-professional OM-D line, and the enthusiast Pen line. Though the OM-D is labelled as professional and Pen as enthusiast, the biggest difference between the two actually lies in the design. The OM-D series takes its design from the original Olympus OM system, a series of film SLRs sold between 1972 and 2002. The Pen series is derived from the original family of half-frame fixed-lens rangefinder cameras also known as Pen that existed from 1959 to the early eighties. The technology on the inside of concurrent models is quite similar, so whether you choose an OM-D or a Pen will depend very much on what you consider attractive–the SLR style or the rangefinder style–and the kind of photography you do.

If you are a professional photographer who is considering the switch to a brand new system, there is really only one logical choice: the Olympus OM-D E-M1. The E-M1 has been the company’s flagship camera since September 2013, and continues to retain the title, partly owing to its professional build (including a sturdy protruding grip, weatherproof body, and many external dials and buttons) and the recent firmware update 2.0 it received. Professionals will also appreciate the large and bright built-in EVF, tilting touch LCD screen, 5-axis internal stabilisation for shooting at slow shutter speeds, and complete compatibility with Zuiko 4/3s lenses.

Many professionals are happy with the system they already own but would like a second smaller body for travel, street and other informal occasions. While the E-M1 could also fill this roll, it is the most expensive and the largest of all Olympus mirrorless bodies. Likewise, an advanced amateur may not need the plethora of features found on the E-M1, nor have the money to spend on a professional system. As such, I would personally recommend one of the Olympus OM-D E-M5, E-M10 or E-P5 to both categories of photographer. All three are on the same level as the E-M1 in terms of performance (give or take a few features), with the main differences lying in their design.

The E-M5 and E-M10, being part of the OM-D family, are smaller versions of the E-M1. As a rule of thumb, I tend to recommend the E-M10 over the E-M5 not only because it is cheaper and more recent, but also for its brighter EVF, sturdier buttons/dials and extra useful features such as WiFi. The fact that it is not weatherproof like the E-M5 is of little account as most Micro Four Thirds lenses aren’t weatherproof either, and the 3-axis stabilisation on the E-M10 functions almost as well as 5-axis stabilisation on the E-M5.

On the other hand, we have the Pen E-P5, which is the flagship model for the Pen series. It is nearly identical to the E-M5 from the sensor to many of its features, though it does not have a weatherproof body. Designed in the classic rangefinder style, it makes a great street and travel camera, and can even work well for events and weddings if used as a second body.

The main difference between the E-P5 and the OM-D line in terms of usability is the lack of a built-in viewfinder. An option could be to invest in the large and bright external VF-4 viewfinder, as using the LCD in bright sunlight can become tedious. However I’d be more tempted to suggest an E-M10 or E-M5 if having a viewfinder if critical for you. The VF-4 mounted on the hot-shoe can make the camera less compact and more awkward to store inside your bag.

In the case of Olympus and most other photography brands, the lower your level, the more choice you’re given. This isn’t always a good thing as we’ve already explained. Too much choice breeds confusion, which is the last thing a beginner needs.

While I cannot claim to know the individual needs of every beginner, there are a few common points that crop up in our conversations with those who email us: good image quality, portability, good autofocus (for tracking kids and pets), WiFi capabilities, and a reasonable price.

The good news is that all Olympus cameras have great image quality, even the earlier models. Even the Pen E-P3 (released in 2011) has a good 12MP Live MOS sensor, which is more than enough for producing 3×5 or 4×6 prints and certainly more than enough for online use. (By comparison, the iPhone 5 has an 8MP 1/3.2 inch sensor.) Portability and good autofocus is also something every Pen series has down to a fine art.

WiFi, which only first began to appear in 2012 starting with the high-end Pen E-P5, and a low price point are more problematic. Whereas the first Pen models can easily be found for around $200-300 with the 14-42mm kit lens included, more recent models can put you out of pocket by $500-700. The amount you’re willing to spend ultimately depends on how seriously you plan on taking your new hobby.

As of today, the one Pen camera that has it all is the Pen E-PL7. Behind the wonderfully elegant design, you have all the “guts” of the OM-D E-M10. It’s fast, it’s compact, it’s got WiFi and considering its powerful insides, it is fairly priced.

If you’re on a tight budget however, you may need to sacrifice some of the latest technology for a simpler model with which you can learn the ropes of photography and make mistakes. A few years ago, it wouldn’t have been possible to find an affordable Olympus mirrorless camera but the influx in new models has brought about price cuts on the earlier ones. This is especially true on eBay where you can find hundreds of second-hand Pen models everyday.

Three Pen models we can recommend to beginners are the E-PL5, E-PM2 and E-P3. They are modern enough that they include many of the most recent Olympus features, but old enough that their price has dropped significantly.

We hope that we’ve managed to answer any nagging questions you might have had about the Olympus Micro Four Thirds series. If you have any further doubts, don’t hesitate to leave us a comment below!