You are here: Home / In Depth / Mirrorless Musings / Falling in Love All Over Again with the Olympus OM-D E-M5 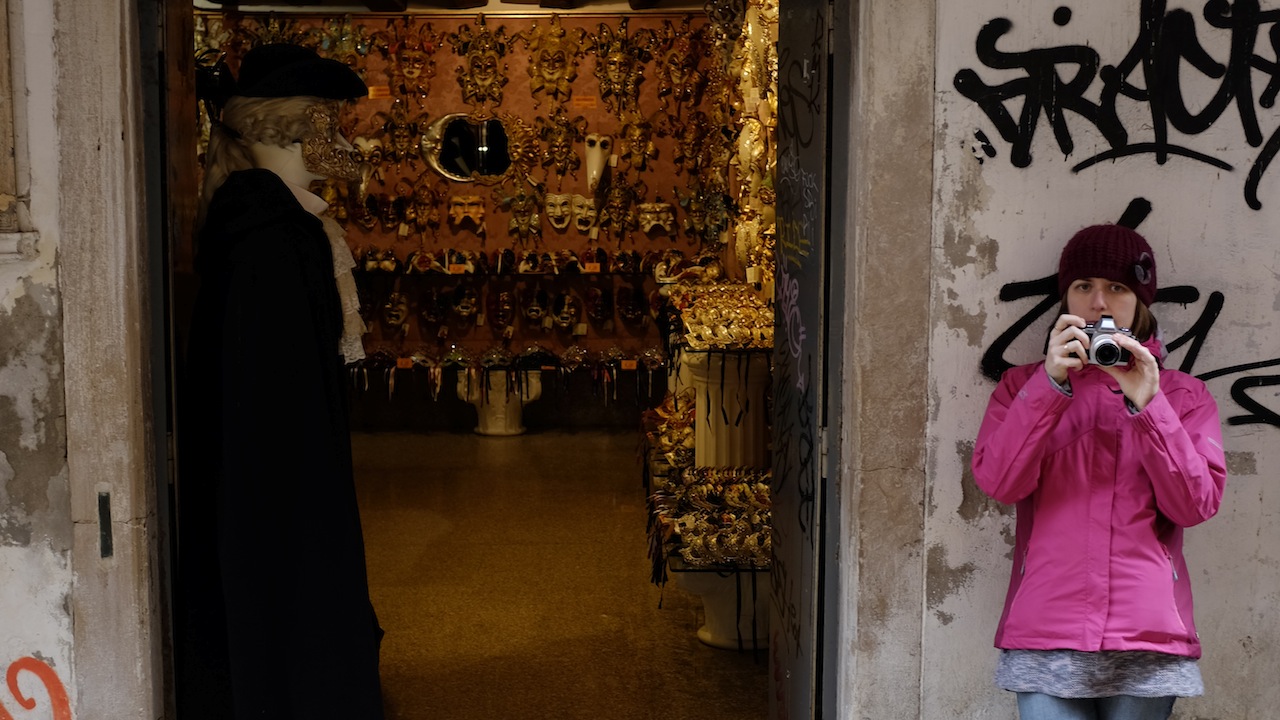 Tonight, I fell in love all over again. Not with my fiance and fellow MirrorLessons writer Mathieu (bless his heart), but with a camera – the Olympus OM-D E-M5.

This isn’t to say that I ever stopped loving the E-M5. It has the fastest continuous shooting mode I’ve ever seen, a cool retro body reminiscent of the old OM-D series, and drool-worthy image quality, despite its small Micro 4/3 sensor. And did I mention how incredibly silent and discreet it is?

But tonight was different. I had decided to accompany my fiancee on a photography assignment at the Massimo Cinema near the National Cinema Museum of Turin, where he was planning to use the E-M5 professionally for the first time.

I have been with Mathieu on these assignments before, and I remember how, with great difficulty, he used to lug around his large green camera bag with the Nikon D700 and three pole-like lenses inside. One could have mistaken him for the Hunchback of Notre Dame.

Hence, this was the first difference I noticed as we trotted towards the museum.

“Where’s your camera bag?” I asked, rather puzzled.

“Here,” he replied, turning around sprightly to reveal our small National Geographic pouch. “You can’t get much smaller than the E-M5,” he smiled. Touche.

The theatre was, like any other, poorly lit, save a couple of fluorescent lights on the desks where the presenters sit, and two lightbulbs in the corners of the ceiling.

As the presentation began, I watched Mathieu draw out the E-M5 like a silent pistol, attach the tiny 45mm portrait lens, and begin taking photos of the presenters. Back and forth across the room he seemed to float, with the E-M5 continuously snapping shot after shot, hardly letting loose a whisper. It was almost comical to watch. Here was a professional photographer on a professional assignment shooting in complete earnest with what, at first glance, appeared to be a compact camera.

Except, there is actually nothing comical about it. The E-M5 was so silent, so unobtrusive, so much a part of the background, that you hardly even knew it was there. The same cannot be said for bulky DSLRs like the D700, which make a loaded bazooka look friendly.

Then there was the image quality at high ISO. Mathieu briefly showed me a few shots taken at ISO 3200 which made the gloomy room look as if it had been lit by a giant beacon. And there wasn’t a trace of noise. The whole time we were there, I think he used the external flash once.

Suffice to say that by the end of the assignment, my heart was a-flutter with a rekindled love for the little Olympus.

For a professional photographer, a camera like the E-M5 is a Godsend. And the strange thing is that, on account of either pride or ignorance, so few pros give mirrorless and Micro 4/3 cameras the time of day for professional work. More than once, our little E-M5 has raised eyebrows, or even provoked a few smirks from fellow photographers, but we simply shrug them off as we know exactly where the E-M5 stands in terms of quality and performance.

Oh, and we also know that Mathieu will continue have good posture at the ripe old age of 70! And doesn’t that make it worth every penny?