You are here: Home / Reviews / The Voigtlaender Nokton 25mm f/0.95 Hands-On Review: a unique lens for your MFT camera! 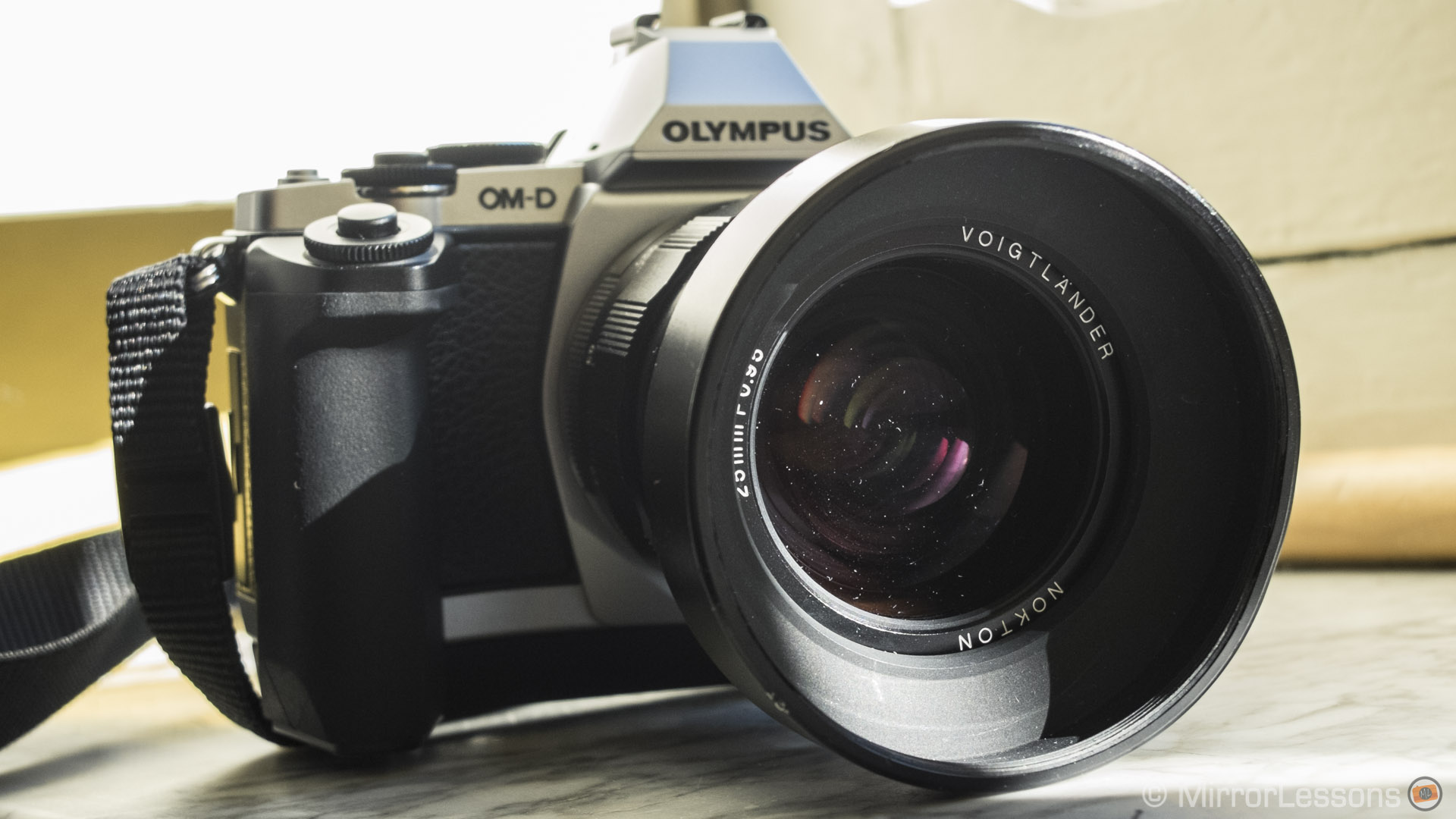 The Nokton 25mm f/0.95 is either a lens you love or hate. It gives your photographs a unique look and produces a very soft and pleasant bokeh, but the lens doesn’t come without its faults.

As always, the question is: is it worth adding to your collection? I’d say ‘yes’ if you are willing to invest in a product knowing that it isn’t perfect … but first things first!

Voigtlaender is a very old german optical company famous for old film cameras such as the Bessa line, as well as for its lenses made for the Leica M mount. In 2010, they released their first MFT mount lens, the fastest lens ever made for the system with an aperture of f/0.95! There aren’t a lot of lenses on the market with that kind of aperture. The only other lens that comes to my mind is the Leica 50mm Noctilux, which is very different as it is build for full frame cameras and costs nine times the price of the Nokton!

Like any other Voigtlaender lens, it is manual focus only: there isn’t an AF motor inside, nor a chip to read metadata. This can be limiting as it is not easy to focus with this lens, especially at its fastest aperture.

In 2012 Voigtlaender released its second f/0.95 lens, the 17,5mm (35mm equivalent on full frame sensor) and is planning to release a third lens this summer, the 42,5mm which, as its focal length suggests, will be ideal for portraits.

f/0.95: its most attractive aspect is also its weak point…

When you buy a lens that fast, you buy it for one reason: to take advantage of the fast aperture to isolate your subject from the background with a wonderful bokeh. The Nokton produces a very nice result and gives some of that full frame sensor look to MFT cameras, also adding a touch of film look when it comes to colour and contrast reproduction.

This is really nice but the main problem is that the lens is too soft at f/0.95. You will need to stop down to f/2 minimum to get enough sharpness, which is two stops down from the main reason you are buying this lens. Disappointing? Yes, it is – even though you can achieve some gorgeous images at f/2 and up, you’re always aware that you’re working with a lens that could be much better than it actually is. It is a little bit frustrating at times. Plus, I don’t know if I want to spend almost $1000 on this lens, knowing that I won’t be able to use it for the reason that attracted me to it in the first place!

A good example of the softness at f/0.95 is shown below: the details on my cat Marigold are limited and you can also slughtly notice some sort of “glow” around the edges.

Below a direct comparison between four different aperture values:

The lens is entirely made of metal, so it feels very solid. The focus ring is very smooth and nice to use. The aperture ring turns by 1/steps but it is a little bit weak and you can end up changing your aperture inadvertently. It doesn’t weigh too much and it is well balanced with my Panasonic GH3 or the Olympus OM-D E-M5. The lens hood is attached directly to the lens and cannot be pulled out, which isn’t a bad thing and gives enough protection to the front of the lens.

The lens lets you focus relatively close (around 17cm) which is really nice for macro shots if your object isn’t too small.

As I mentioned before, it isn’t easy to focus manually with this lens, especially if you stop down close to f/0.95. Forget relying only on the sharpness of your EVF or even your LCD screen, the best method I found on my OM-D is to assign the magnify option to the Fn2 button, press it, adjust the focus and take the picture right away to avoid your subject or yourself shifting position. This process will slow you down as you also have to change the position of your focus area so that you can focus without having to adjust your composition after.

For this reason, you should forget about shooting fast-moving subjects or fleeting moments. This lens is better suited for photo sessions where you have a subject willing to pose for you, or for static objects. With a little bit of practice, you can achieve very nice results if you are willing to be patient and accept that, at first, lots of seemingly in-focus pictures will be blurry when you see them on your computer.

The lens, being really fast, also gives you some extra light in low-light environments, but the same limit applies here as well: you will have to stop at f/2 or F72.8 to have sharp pictures, and since it doesn’t have autofocus, you will need some extra patience. After some reflection, I think that a fast prime lens with AF such as the Leica 25mm f/1.4 for example) is a better solution for low light photography.

The lens takes on a new personality when it comes to video. Its soft aperture is less noticeable, probably because the size and resolution of video is less demanding than a 16mp still image. Its soft contrast and colour reproduction make this lens an excellent companion for a Panasonic GH2 or GH3 and will give you a look closer to the one you find on HDSLRs. For focusing, a proper follow focus is recommended though.

Below you can watch a mini documentary shot with the GH3. The widest shot for the interview and the hand-held shots while Deborah is painting have been shot with the Nokton.

As I stated before, it is a real shame that this lens isn’t sharper at f/0.95 and 1.4 but with a little bit of practice, it can give you a lot of satisfaction, especially since the look this lens provides is hard to find elsewhere on MFT lenses. Apparently, the 17,5mm version is sharper, and if the announced 42,5mm stays on the same path, Voigtlaender would be under pressure to release a second sharper version of the 25mm, proposing one of the pretigious MFT lens series available on the market. Let’s cross our fingers!