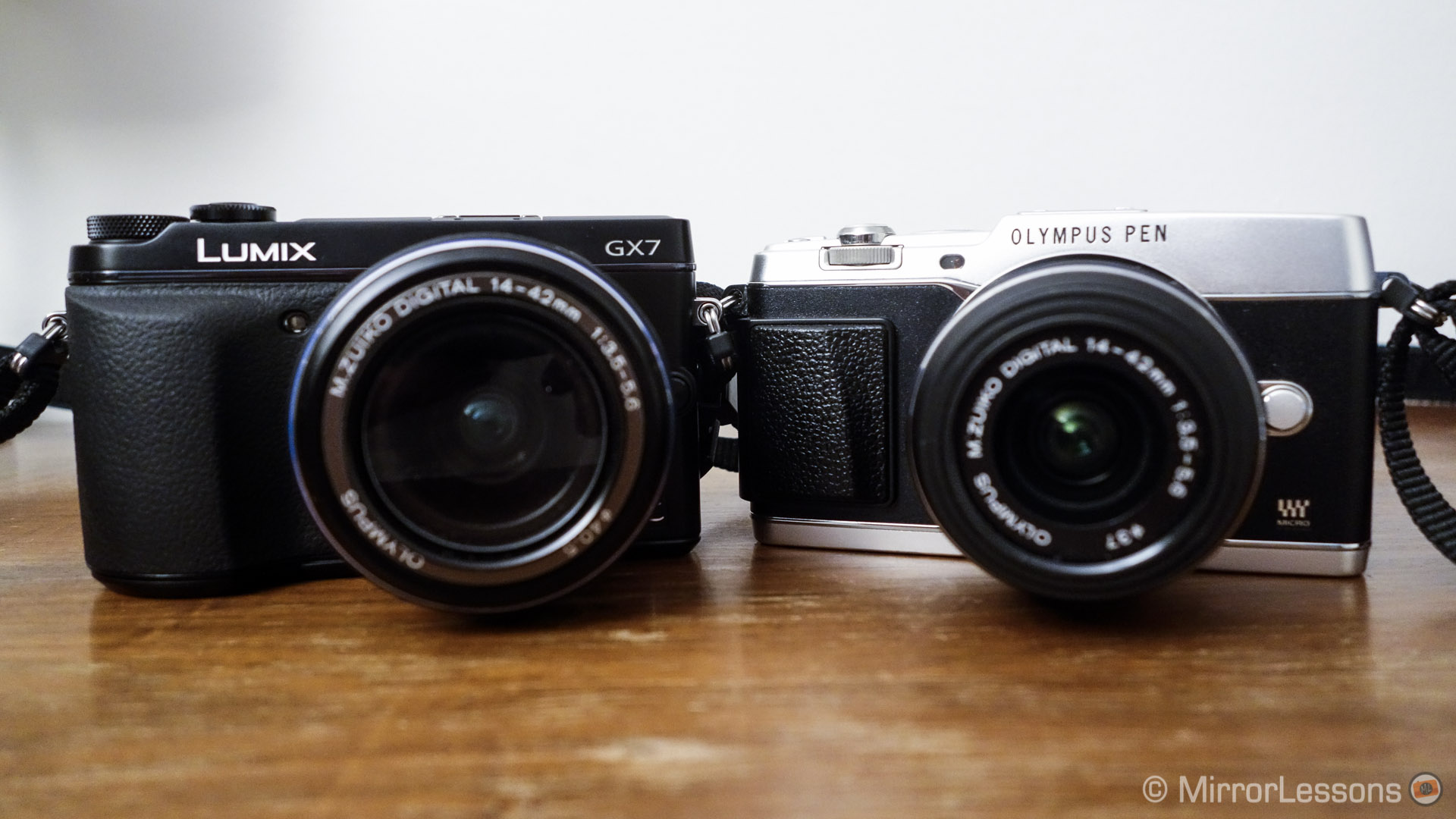 The palace was mostly used as a base for duke Carlo Emanuele II’s hunting expeditions. Inside you will find dozens of rooms, each decorated with paintings by famous court artists of the times, stuccos and statues. Outside are the expansive royal gardens which were destroyed during the Napoleonic domination to make way for a French training ground, but were later rebuilt in a modern style.

Since cloud, mist and rain had engulfed most of Italy on Saturday, we decided to visit the palace to test out the new Panasonic Lumix GX7 with a specific focus on how it compares to its direct competitor, the Olympus Pen E-P5. (We also brought along the Fuji X-M1 but we’ll leave that for a future article!)

The test was based around the low-light performance of the two cameras, specifically high ISO performance and internal stabilization.

Before performing our own test, we had read on various forums and photography blogs that the GX7 performed slightly better than the E-P5 in terms of high ISO. This could only be expected as the GX7 has a more recent sensor than the E-P5, which has the same sensor as the OM-D E-M5. Of course we trust words less than pictures, so we took some images of our own inside the Reggia di Veneria Reale to verify these claims.

The pictures in this selection range from 1600 ISO all the way up to 25600 ISO, which is the maximum both camera can reach. Every pair of images was taken with the same settings for aperture, shutter speed and white balance. Both picture profiles were set to natural and we used the same kind of lens, the 14-42mm f/3.5-5.6 kit lens from Olympus. The only difference is that the GX7 had the more recent version of that kit lens.

Please note that if not otherwise stated, all the pictures come from the raw files.

Here the differences are minimal if not non-existent. Both cameras seem to handle equally with regards to detail retention and the amount of noise. The only differences are in the out-of-camera JPGs where the GX7 seems to be slightly cleaner. Both cameras were set to standard/0 for noise reduction. I guess each camera applies a different kind of noise reduction by default.

The only thing that we can really notice is a difference in colour rendition and contrast, which is also confirmed by the out-of-camera JPGs below. This difference is visible in all the shots we took.

At 3200 ISO, both cameras continue to perform in the same manner.

In the first 3200 ISO pair, the GX7 seems sharper, especially if you look closely at my sweater. However, I couldn’t be 100% sure that the two pictures had the exact same focus point. Moreover, the fact that we used two different versions of the 14-42mm lens may have caused the images from the GX7 to be sharper than those from the E-P5. As such, I later did a quick test using the exact same lens to see if there was a noticeable difference in sharpness.

The GX7 seems to retain ever-so-slightly more detail but the difference is so minimal that it’s hardly worth mentioning. Many people have said that the GX7 doesn’t have an AA filter but there hasn’t yet been an official statement declaring that this is the case. The E-P5 apparently has a weak AA filter, so if the GX7 lacks an AA filter completely, the tiny difference in detail retention we see could be justified by this.

This becomes even more obvious at 12800 ISO especially regarding colour accuracy. It is visible in both raw and JPG format. The Pen E-P5 tends to produce an excessive amount of yellow/green while the GX7 files look more natural.

Finally, at 25600 ISO, the GX7 beats the E-P5 hands down. It almost looks as if the two cameras had different white balances, but of course this wasn’t the case.

It is important to note that a stabilization comparison wouldn’t have been possible before the release of the Lumix GX7 because Panasonic never used to include stabilization in its camera bodies; they would include IS in their lenses instead. Even the wonderful Panasonic flagship, the Lumix GH3, has to rely on the internal stabilization of the lenses used with it.

It was for this reason that we were very curious to see how the first Panasonic camera with stabilization would stand up against the 5-axis IS found in the Pen E-P5.

The test took place in the town of Veneria, just outside of the palace grounds. The speeds we used were between 1/10 of a second and an impossible 3 seconds, just to push the cameras to the extreme (as well as our ability to stand perfectly still!). For every shot, we kept the ISO to 200 and the white balance to 3200 Kelvin. We used the two 14-42mm f/3.5-5.6 kit lenses from Olympus.

At 1/10 of a second, both cameras perform almost equally, while at 1/5 of a second, the GX7 starts to show some blurriness.

Due to the diverse technology of the two in-camera stabilisation systems, on paper the 5-axis of the Pen E-P5 clearly has an advantage (5 axis versus 2 axis for the GX7). We took shots down to 1 second. For 1 second, we both sat on a bench and tried to remain as still as possible. The E-P5 results are sharper but I must say that the GX7 defends itself very well.

At speeds slower than 1 second, the E-P5 clearly shows the power of its 5-axis stabilisation and what you can do with it at even 2 or 3 seconds.

Keep in mind that the results of hand-held pictures taken at slow shutter speeds are also affected by how still the photographer stands when he or she presses the shutter release button. For each example, we took several pictures and picked the best one. We noticed that we needed 3 or 4 shots with the GX7 to have a good/acceptable results, while with the Pen E-P5 we only found an average of one bad result in four pictures taken.

This shows another advantage of the 5-axis stabilization which is its consistency.

With the GX7, you really need to be as still as possible, while with the Pen, you have more margin for error with micro movements.

If we stop pixel-peeping for a minute and look at the images in terms of a real world situation, I would say that the performance of both cameras in low-light conditions is great. You really need to push the boundaries of each to see the differences. The Panasonic Lumix GX7 has a newer sensor, so by default it has better ISO performance at high values. I also noticed better colour rendition, and judging from the pictures we took yesterday it also seems to have more dynamic range.

The Olympus Pen E-P5 on the other hand has the unbeatable Olympus 5-axis stabilisation that allows you to take sharp pictures down to 1 second, and even below one second the results are more than acceptable. The GX7 defends itself quite well (remember, in-body stabilisation is something new in the Lumix line) but can’t rival the Pen when the shutter speed becomes too slow.