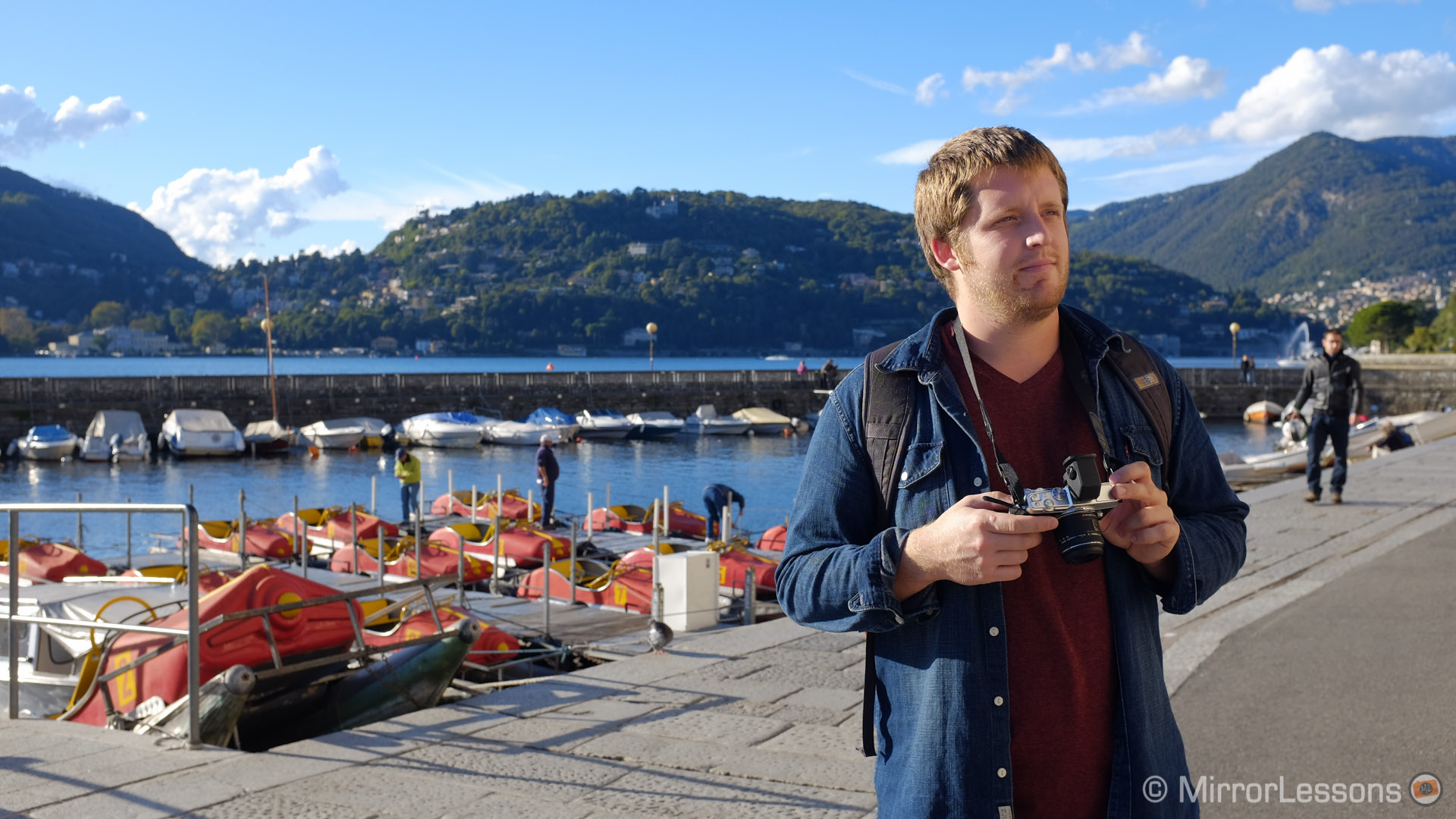 Ever since Mathieu and I moved into our new apartment here in Turin, we have received many visitors – both friends and family – curious to explore the city and partake, if just for a few days, in our Italian lifestyle. Our most recent visitor was my younger brother Nick who had only been to Italy once before. After much humming and hawing, we settled on taking him to Lake Como for the day so he could have a taste of both the lakes around Milan and the Italian Alps.

However, to our shock and dismay, he had completely forgotten to bring his camera. Not only, but he didn’t seem particularly bothered about documenting his trip either, something our photography-loving brains simply couldn’t process! So what do a good sister and brother-in-law do in such a case? They lend him one of their mirrorless cameras, of course! At first, Nick was leaning towards the uber-compact and approachable Sony RX100 II but since the battery was nearly empty, he went for the classy Olympus Pen E-P5.

To make things easy for Nick, we set the E-P5 to iAuto mode and attached the 14-42mm kit lens so that he could zoom in and out if he pleased. We also switched the file format to Fine JPG as we knew that he wouldn’t be post-processing his pictures.

To start off, let’s have a look at a few of his best shots from the day!

An interview with Nick Broster about using the Pen E-P5

1. How would you describe your photography routine? Do you have a camera? How often do you take pictures and what do you generally shoot?

Honestly, I am a pretty random photographer and I usually just use a smartphone like most people do nowadays. I usually enjoy taking pictures of interesting weather phenomena and or moments in life I would otherwise forget about. On this particular day I found that because of the quality of the E-P5 I was more courageous in trying more artistic forms of photography. It also helped having Heather and Mat there, who are both exceptional photographers, as guides throughout our day around the northern lakes of Italy. Wonderful place, wonderful camera…how can you go wrong?

2. What was it like shooting with the E-P5? Was it easy to use? Was there anything difficult to figure out?

The E-P5 was actually a pleasure to use! I had the camera on the automated setting which allowed me to focus (no pun intended) on the scenery around me instead of manually adjusting all the settings which I am generally unfamiliar with. In auto mode the E-P5 basically acts like an elaborate point-and-click camera, but with a bit of artistic vision you can achieve some astounding results.

In auto mode the camera has to assume what the photographer wants in the foreground and background and it may take a few tries to get the focusing right. However, it doesn’t take long to figure out, and with a little patience you will take that perfect picture. Overall, a great experience with the E-P5.

I actually used both the external viewfinder and the LCD screen equally, sometimes in combination with each other to get different views of the picture I wanted to take. I found the external viewfinder was great for shots where you need more stability, or when you’re trying to catch a subject in motion. The LCD screen was better for capturing wide expanses of scenery where you have time to frame the shot and get the perfect picture.

4. Did you like the tilting LCD screen? Was it useful?

I loved the LCD screen! It really helped with shots where you have to get down low or up high, and even though I’m only 25, it’s nice to give the knees a break sometimes! The tilt screen makes what would normally be a very difficult shot much simpler.

5. Which is your favourite photo of the day? What was the idea behind the composition?

I think my favourite photo of the day is the one of the elderly couple sitting on a bench looking out at Lake Como. I was trying to capture the beauty and emotion of Como in a single shot, especially in that exact moment when the photo was taken. It was late in the afternoon, when the sun seems to make all the colours of the world bloom. I then noticed a ferry was slowly drifting by, so I waited until I could capture the couple watching the ferry and, voila: Como summed up in a single picture.

Glad you enjoyed the lakes and the E-P5, Nick!

A word about the Pen E-P5’s iAuto mode

Since Mathieu and I mostly use our cameras in Manual or Aperture/Shutter priority mode, we have very few sample images taken in iAuto mode. This is why having Nick along for the ride provided us with such a wealth of information about the E-P5’s ability to work on “autopilot” as it were. Incidentally, there were a few things we noticed when looking back at Nick’s photos on our computer at home.

First, it was obvious that the Pen E-P5 was very good at reproducing outdoor colours in broad daylight in iAuto mode. The colours in the resulting images are rich, natural, warm and accurate. Indoors, too, it did a great job of reproducing the subtle browns, blues, reds and greys of the church walls and tapestries. This tells us that the E-P5 can be relied on to accurately judge the colours and white balance in most situations.

However, there was one moment during the day when the E-P5’s auto white balance did not accurately reproduce the colours of the scene: when we shot the Alps against Lake Como at dusk. Whereas the actual colours were quite a subtle bluish-silver, the Pen E-P5 has rendered them various shades of blue and turquoise in iAuto mode.

Below you can also see a photo taken of the same scene with the Fuji X100s in Aperture priority mode. Though both were in Auto WB mode, the X100s has done a much better job of reproducing the silvery colours of the scene.

At first, we thought the problem might have been due to the Pen E-P5’s Warm Colours option begin switched off, but we later discovered that in iAuto mode, it automatically switches on.

Otherwise, the Pen E-P5 fulfilled its duty as the perfect companion for an amateur photographer who is just coming to grips with the basics. We hope that this experience has sparked Nick’s interest in the art of photography, and that we’ll see more pictures from him soon!

Are you just starting out in the world of photography? If so, check out these other Olympus Pen models as well. They are much cheaper than the E-P5 but have everything an amateur photographer could want.