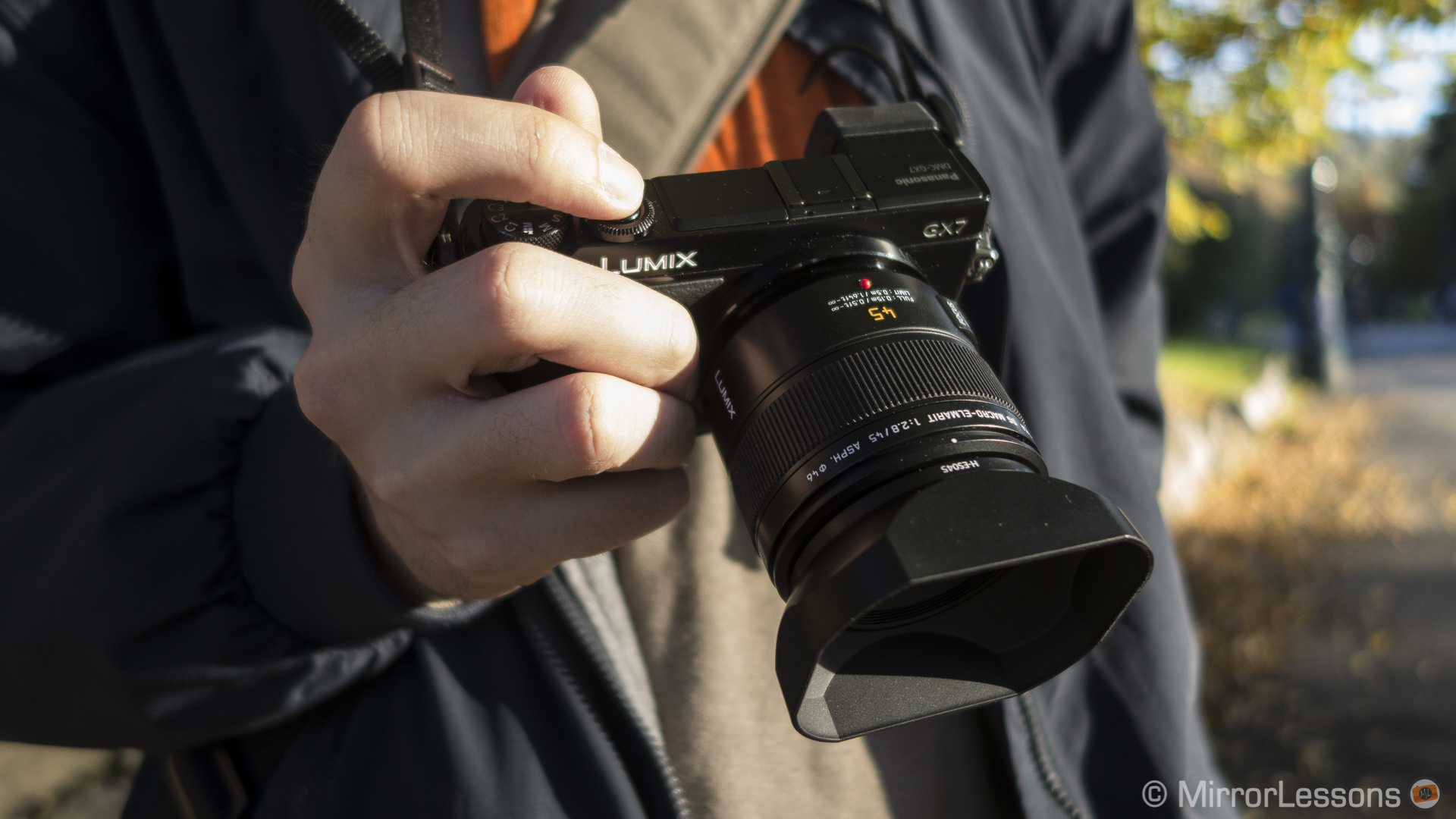 On Sunday I had the chance to use the Panasonic Lumix GX7 along with the Panasonic Leica 45mm f/2.8 macro lens when a friend, who had rented it for the weekend, told me that he wasn’t planning on using it for the afternoon. Contrary to my expectations, I really fell in love with this little lens. Heather will tell you that I am anything but a macro photography fan (while she is!) so I had never really paid much attention to macro lenses up until then. But since I never refuse the opportunity to try something new, I took it out for a spin and found myself really enjoying it!

The 45mm f/2.8 (90mm equivalent on 35mm format) is one of the few lenses designed by Leica for the Micro Four Thirds format. Its shortest focus distance is 15cm which will give you a true 1/1 magnification on the MFT sensor (the equivalent of full frame would be 2:1). The lens is compact and made of solid plastic. The mount is metal and the overall build quality seems very good.

To test it out, Heather and I took a walk through Valentino Park in Turin. There was a very particular light at the time thanks to a mix of the 3 o’clock sun, cloud, haze and abstract shadows from the trees. Heather was actually the first to use the lens when she spotted a Cabbage White butterfly, which had somehow managed to survive the recent cold spells we’ve been having. It was lazily flitting from one clover plant to another along the grass, obviously hungry and ready to settle.

Macro photography requires a lot of patience especially if you like to shoot insects. The ideal set-up would be to use a tripod to close the aperture as much as possible. This is because, at a short distance, the fine line between in-focus and out-of-focus is a question of millimetres. While reviewing the pictures on my computer, I found that several were out of focus. Also, while like most Panasonic lenses, it has built-in stabilisation (Mega O.I.S.), it isn’t really effective at short distances. Honestly, it is understandable – if you are very close to something so little, every micro movement will be amplified. In some cases, the wrong focus point or a shaky hand can even turn the photograph in something more “artistic” and original!

Even though all our shots were hand-held, we managed to bring quite a few decent shots home. After the butterfly, I spotted a dragonfly on top of a fountain, but when I tried to get as close, he flew away. For the shot, I switched to manual focusing as the lens had trouble locking onto the subject, something that didn’t happen with the butterfly and the other macro shots I took.

I have to say that I found the AF performance of this lens really impressive overall. Of course, if you have time to adjust all the settings properly, manual focus can be a good ally, as often between one shot and another, the lens refocuses completely and therefore takes more time to lock again. With insects, time can be very precious.

Then I decided to concentrate on autumn leaves to capture some interesting textures and colours. As I mentioned before, the light was also amazing. At one point, I suddenly spotted a green leaf standing out amongst all the other dead leaves. It was an interesting backlit situation, one that let me see how the lens would handle flare. I found purple flare in other backlit images as well, something that is often pronounced on many MFT lenses.

There was a lot of wind, which made some of the shots difficult to compose in terms of focusing, especially for the leaves still attached to the tree branches. Despite the blur, I kept some of them anyway as a handful turned out very interesting.

I then took some pictures of leaves which had already fallen. This made the task a lot easier.

While this lens is mainly designed for macro, its focal length makes it ideal for portraits as well. I took a few of Heather and that’s where the lens surprised me even more. It has a great bokeh and a very good overall soft contrast.

Macro lenses aren’t always good for portraits, as their photographic nature makes them sharper. Dedicated portrait lenses tend t0 produce a softer look especially regarding skin tones. But, if you do decide to use a macro lens such as the 45mm, it is also true that you can soften your images a little in post-production. Despite this aspect, I found the 45mm full of potential for portraits though I only used it briefly. It would have been nice to compare it to the M.Zuiko 45mm f/1.8 but unfortunately I didn’t have it with me at the time.

I also took a couple of landscape shots of the park. A lens like this isn’t meant for this kind of photography, but still, I found it perfectly acceptable for general purposes as you can see from the examples below.

One day is not enough to write a complete review, but it was enough to put this lens on my wish-list. As expected, sharpness is very good even at its fastest aperture. This makes it perfect for capturing amazing details that you cannot see with the naked eye. But achieving sharpness in your images can also represent a challenge when you focus very closely on moving subjects.

I only tried the lens on the GX7 so I cannot compare its performance to other MFT bodies. I really like how the GX7 handles colour and contrast and that’s why I kept so many OOC JPGs. I mostly used the vivid profile and alternated the shadow/highlights options in the quick menu. I really like how easily you can change the curves with the touch screen. Of course there will be more on that in our full review coming soon!

Are you a fan of macro photography? What do you think of the images taken with the Leica 45mm f/2.8?