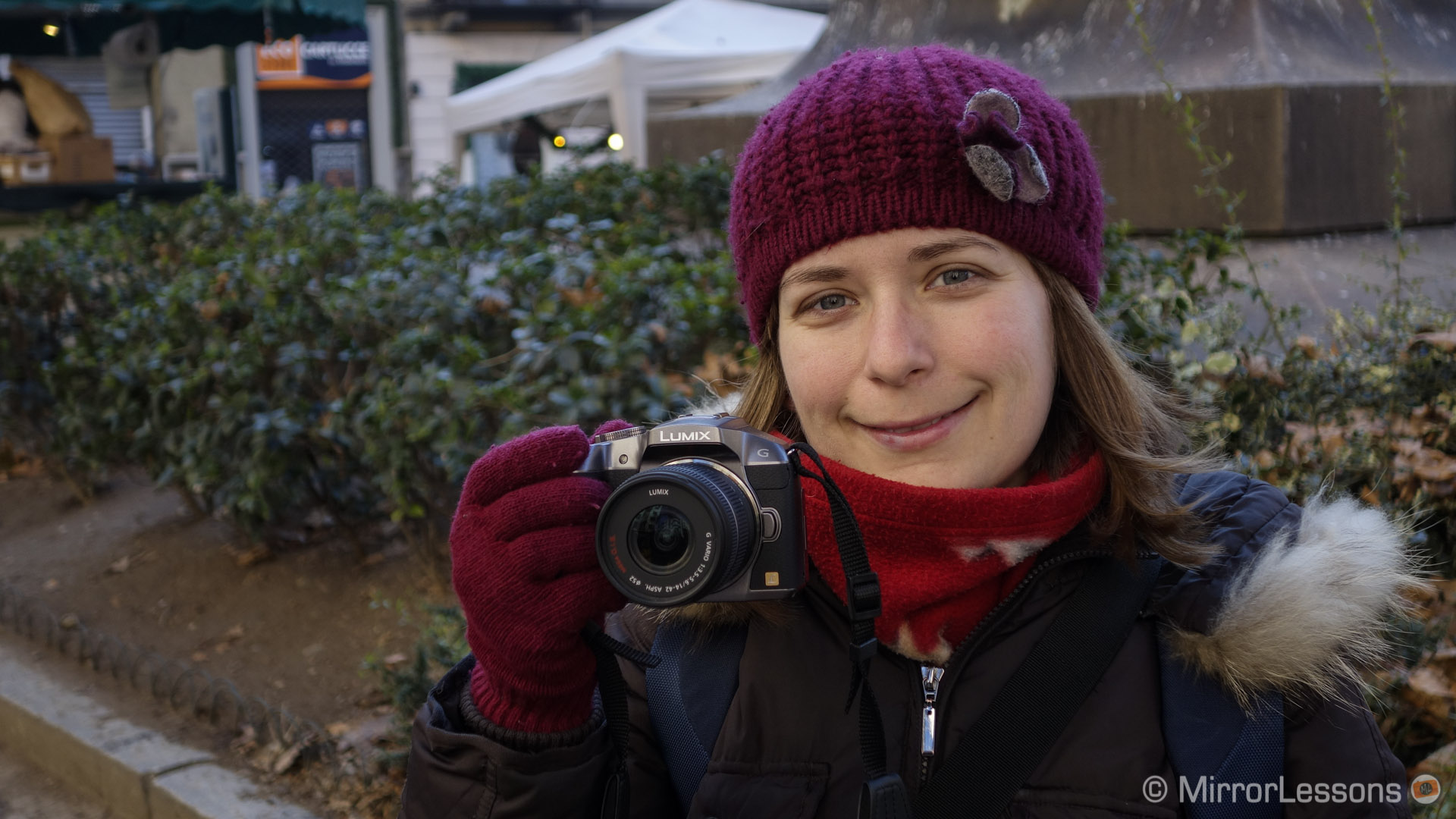 The words “Try a new camera free!” are bound to catch the eye of any photography blogger. These were the exact words on the Lumix LifeStyle Italia brochure I picked up at the Riflessi Camera Store in Turin. The offer was to try the new Panasonic Lumix G6 for a week. Having already used the Lumix GH3 and GX7 extensively, we figured it would be interesting to try out a Lumix designed for entry-level users to get a sense for the similarities and differences.

N.B.: Since I had little leeway during the week to properly test all the various aspects of the Lumix G6, I am writing this as less of a review but more as a brief commentary on how the G6 compares to its two high-end sisters, the GH3 and GX7, and how it felt to use it on a daily basis.

Day One: Christmas Party with the Colleagues

Or…whose idea was it to put the old Lumix G5 sensor in the G6 anyway?

I picked up the camera on Saturday afternoon and started using it on Monday evening at our school’s annual Christmas get-together. Usually, we choose to meet up for a meal in a pizzeria, but this year we were invited to a colleague’s house for a potluck dinner. Between the dim lights and the festive decorations, it was the perfect opportunity to get the low-light testing out of the way, and document the one time during the year when we teachers can sit down and relax!

Coming from the GH3 and GX7, I naturally had pretty high expectations regarding image quality. Unfortunately, despite being one of the newest Lumix models on the market, the G6 wound up with the same 16 MP Live MOS sensor found in the G5, and I have to say that the difference in quality compared to more recent M4/3 sensors is noticeable, especially in low light. While I wouldn’t expect Panasonic to put their newest MFT sensor into an entry level model, I feel they could have used the GH3 sensor, which is now a year old.

This isn’t to say that the sensor is bad. The images are perfectly useable up to 1600 ISO, and even higher if you aren’t too bothered about having flawless image quality. And let’s face it – most amateur photographers aren’t going to be pixel-peeping their family snapshots anyway.

Below are three images taken at high ISO speeds from the dinner. After trying a couple of shots at ISO 6400, I gave up and went back to 1600 and 3200 as I personally found the loss in detail bothersome.

Colours and dynamic range are top-notch…

The next day, I went on a quick walk around the city between jobs. There was a classic winter sky, completely void of clouds – the ideal setting for testing the dynamic range of a camera.

Overall, I was very pleased with the quality of the JPGs and raw files in daylight. The colours appear natural and accurate just like on the GH3 and GX7, and the dynamic range is great.

This image I took of a street near our house is a good example of the camera’s potential. In the original raw file, the highlights on the cobblestones were completely blown whereas the shadows were very dark. Despite this, I was able to recuperate most of the details in the highlights. When you open the shadows, they show minimal noise but it isn’t visually unpleasant.

This second example I took of Mathieu as the sun was setting shows just how flexible the raw files are when it comes to recuperating details in the shadows. As you can see from the original file below, his face was almost completely shrouded in darkness.

But with just a few tweaks in Lightroom 5…

…we have a lovely portrait of the best photographer I know! 😉

In summary, the image quality is absolutely fine for complete beginners and amateurs. An individual with more photography experience may have higher expectations, especially since there are dozens of other mirrorless options out there with better image quality in the same price range.

Below are a few more images taken during our walk around the city. I believe they do a good job of demonstrating the quality of the camera!

Day Three: A Walk Along the River Po

As I was walking along the beautiful River Po on Wednesday, I thought it might be nice to take a picture of the small waterfall that sits beside the Vittorio Emanuele I bridge. My idea was to capture the movement of the torrent, so I slowed the shutter speed down to 1/20 of a second and steadied the camera against the cement wall along the river. After two tries, I managed to take an in-focus image. At the time, I was using the Lumix 14-42mm kit lens with ‘optical image stabilisation’ activated in the G6 menu.

While the optical image stabilisation of Lumix lenses works very well, I feel the lack of internal stabilisation is a great pity as we know that Lumix is capable of putting it inside their cameras. With an Olympus OM-D or Pen E-P5, for instance, you can use any Micro Four Thirds lens from any brand, and the in-body stabilisation will kick into gear. With all Lumix models except the GX7, you are pretty much limited to Lumix lenses for hand-held shooting at slow shutter speeds.

Now that the technology exists, I am hopeful that future G models will begin to feature internal stabilisation as well.

Out and about with the HandlePod

Since starting this website nearly a year ago, I’ve developed a taste for long exposures, and it just so happened that we’d been sent the amazing HandlePod for testing during my week with the G6.

Though the images I took were to test the effectiveness of the HandlePod, I enjoyed how the long exposures turned out with the G6 sensor – very clean and detailed. The G6 was also the perfect size and weight for a compact stabiliser such as the HandlePod.

Day Five: At Home with the G6

What do you do when you’re bedridden? Check out the ergonomics of course!

On my final day with the Lumix G6, I was actually feeling quite poorly so my attention turned away from image quality and performance, which can only be properly tested out in the field, to ergonomics and functionality.

If there is one thing for which Panasonic deserves a huge pat on the back, it is good ergonomics. The GH3, GX7 and G6 all have different bodies but each is as well-built and comfortable as the other. The layout of the buttons, dials and toggles on the G6 is not dissimilar to that of other Lumix G models, in particular the G5 – it has a nice OLED electronic viewfinder in the centre, a dedicated video button, mode and control dials, five function buttons dotted across the rear and two in the virtual menu, and a toggle zoom which also functions as an exposure compensation toggle if a power zoom isn’t attached to the camera.

One feature I could really appreciate was the dedicated iAuto button, which is also present on other entry-level Lumix models. When I was first learning about photography and beginning to experiment with Manual mode, I could have killed to have an easy-to-access Auto mode button on the camera body for when I found myself in a pinch. Obviously, this isn’t the kind of button you’d find on the GH3 or GX7 as the target audience is quite different.

The LCD screen is both touch and free-angle like the GH3, making it useful for all kinds of awkward shots and shooting video. The sensitivity of the touch screen was perfect – no pressing needed, just a light touch of the finger.

Would I recommend the Lumix G6 to a friend of mine?

During my week with the Lumix G6, I toyed around with the camera much as a beginner might have, shooting family, friends, and scenes of interest on my way to and from work, and my overall impression is that it is very approachable and easy to use. The iAuto button on the camera body is a gem for those just coming to grips with the basics of photography, and the ergonomics are just as good as those on the GH3 and GX7.

Many of the features found on the G6 are exactly the same as those found on the high-end GX7: NFC/Wifi connectivity, Stop Motion Animation, and Time Lapse are just a few. I didn’t test them on the G6 but I know from my experience with the GX7 that they are worthwhile additions.

The G6’s only real pitfall is that it lags behind other models in terms of image quality due to the age of its sensor. These days, it is easy to find a similar camera at the same price point with better image quality. The Fuji X-A1 and NEX 5R/T are a couple of good examples. However, the G6 makes up for this lack with its plethora of extra features.

The only other aspect I wish I’d tested was the video but I didn’t have the time. Looking at the specifications, and considering our experience with the GH3 and GX7, it is safe to assume that the video is good because it has an excellent AVCHD codec and because Lumix cameras have always been an important reference when it comes to video. The G6 is no exception; it can record in Full HD up to 50/60p at 28MB/s.

I would definitely recommend the G6 to someone just starting out as a photographer. Panasonic Lumix is a trusted brand, and every G series camera we’ve tested so far has been well-balanced and user-friendly. I just wish I’d had it for more than a week! 😀