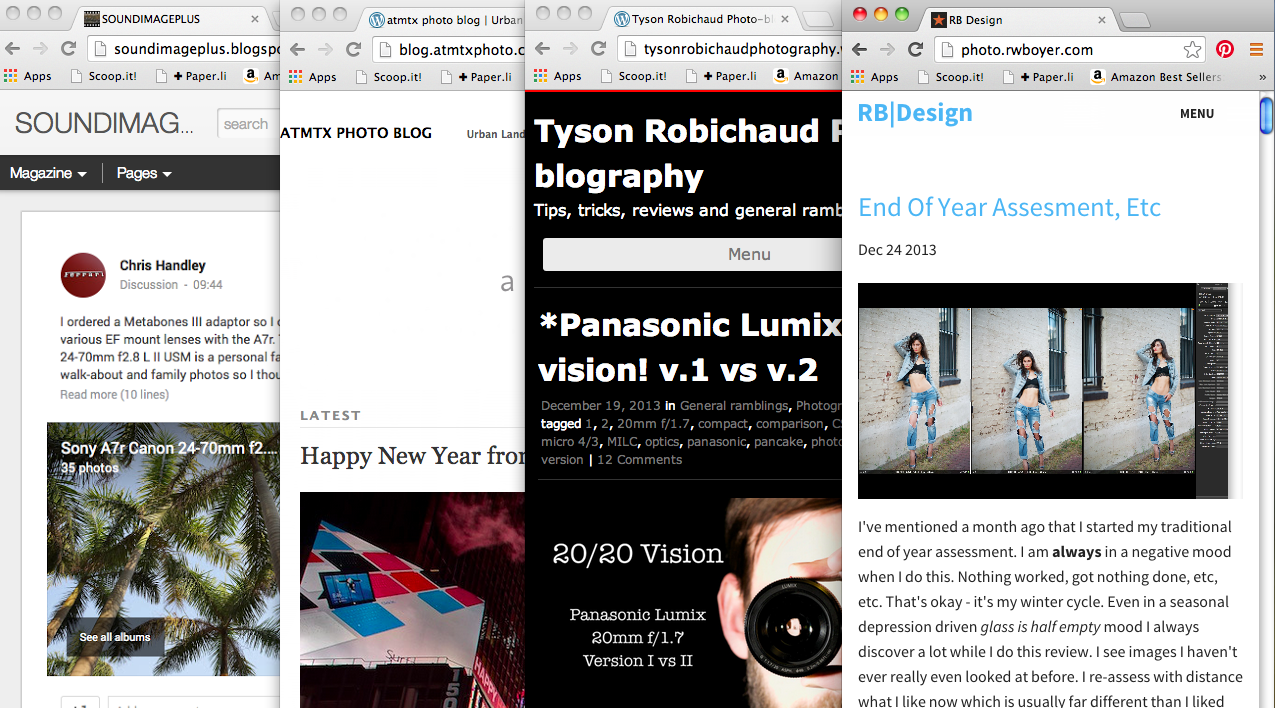 Call me a nerd, but there is nothing that excites quite as much as coming across a great blog or website which talks about mirrorless cameras. (Well, pancakes with real maple syrup come pretty close! 🙂 ) Back in August, I made a list of mirrorless websites which I felt were worth following. Since then, I’ve come across many more excellent resources, so I felt it was about time to update the list with some of my favourites.

The following blogs feature an interesting variety of reviews, comparisons, photo essays and simple thoughts about the various mirrorless systems on the market. Some concentrate on a particular brand whereas others cover a wide spectrum like we do on Mirrorlessons.

It is wonderful to see that so many sites have taken an interest in promoting the mirrorless movement, and with 2014’s camera releases looking extremely promising, I’m sure many more will hop on the bandwagon soon. 😀

We came across SoundImagePlus by chance a couple of months ago on Google+. It is run by David Taylor-Hughes and his wife, and is updated on a daily basis. David works not only as a photographer but as a videographer and musician as well. He uses a total of three systems: the Sony A7r, Fuji X-Pro1/E1/E2 and Panasonic GH3, making him somewhat of an authority in the MILC field. He often writes mini-reviews and essays about specific aspects of a camera which are more digestible than a full review might be.

Atmtx is run by Andy who enjoys photographing urban landscapes with his collection of Olympus Pens. Though he is primarily an Olympus user, he often reviews gear by other brands such as Fujifilm and Sony. I like how he always makes a point to include many large and impressive images in his reviews to break up the text. This is something we also try to do to make our reviews more readable. One of my favourite pieces from Andy so far is ‘The Fujifilm X100s from a Micro 4/3s user perspective.’

Tyson is a man with a sense of humour, and it shines through in his reviews and comparisons. Just have a look at his three-part OM-D E-M5 vs GX7 ‘battle for his affection’ and you’ll know what I mean. Generally, he writes about Micro Four Thirds cameras, but he has been known to compare them to Sonys and Canons as well.

David of FlixelPix is an excellent resource for anything Fujifilm related. Beyond his informative reviews of the various X series cameras, he also includes photo essays of his travels, tips and tricks, e-books and presets for your downloading pleasure. He calls himself a documentary photographer, but whatever genre David dabbles in, he always comes home with a beautiful set of images. Be sure to check out his most popular article “10 Reasons to own a Fujifilm X“.

As the name of the blog suggests, most of Andrew Smallman’s reviews and comparisons focus on ergonomics, though he will touch on other aspects as well. I find it fascinating that he actually builds his own mock-up cameras out of scrap plywood to see how he can improve on the ergonomics of a camera, as in the case of his mock-up GH4. Once again, he focuses on Micro Four Thirds, with special consideration for the GH3, but he also talks about the new Sony A7/A7r, Fujifilm, Canon EOS M, Samsung NX and Nikon 1.

When PekkaPotka writes a review, it doesn’t take long for the mirrorless world to find out about it. Though, as an Olympus OM-D E-M5 user, he mostly writes about Olympus-related gear, he occasionally comments on other systems such as the Sony A7/A7r. My only complaint is that he doesn’t update his blog with new articles very often. Otherwise, he is a great resource.

Many of RW Boyer’s articles deal with his discoveries and experiments in photography. A Nikon D600 and Fuji X100s user, you’ll often find him writing about these cameras within the context of his personal projects, one of my favourites being ‘The X100s as an art camera‘. A true expert in his field, RW Boyer’s writing is intriguing, informative and unapologetically honest, but we like him that way!

Carlos Echenique is a photographer whose main body is the Nikon D800, but he also owns an OM-D E-M1 as a walkabout/travel camera, and a Pentax Q for stealth. So far, he hasn’t written many reviews but I enjoyed reading his comparison between the E-M1 and the Fuji X-E1, and I expect more reviews are on the way.

Ohm is a photographer and audiophile based out of Japan. You’ll often find him reviewing and comparing Fujifilm cameras and lenses in the ‘photophile’ section of his website, though he’ll gladly talk about other popular releases from competing brands as well such as the Sony A7/A7r.

Thomas is a trained animator, graphic designer, motion graphics artist and photographer. He often publishes interesting articles about Fuji X series cameras as well as the Sony Nex 7. His posts tend to concentrate on how you can post-process your Fuji raw files with various software. He has also developed his own presets for Lightroom which are available for free on his website.

We’re always looking for new mirrorless blogs to follow, so if you know of one in particular, do let us know in the comments section!