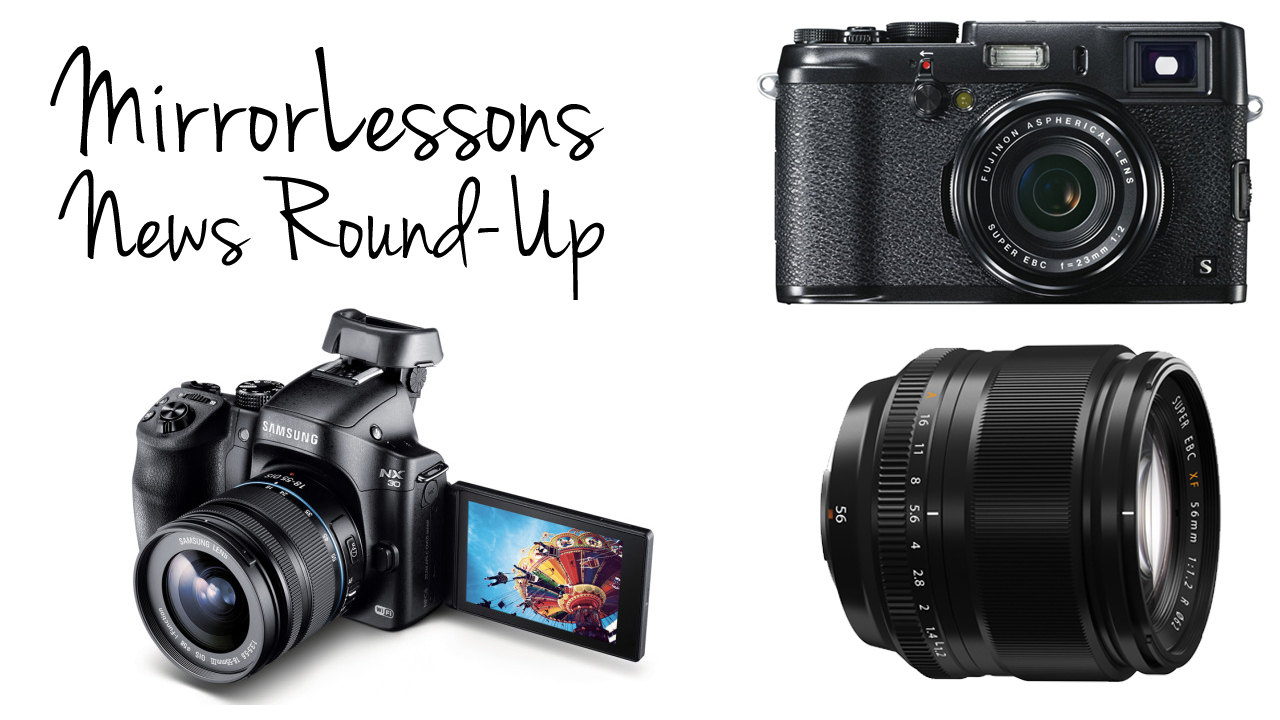 It’s been a while since we last did a news round-up but with many exciting products on the horizon, it looks like we may be doing a few of them throughout January and February! 🙂

Samsung was the first to announce a new camera this year while Fujifilm has rung in 2014 with many new products including several X lens announcements, a black version of the X100s, and a selection of new bridge cameras.

A Fujinon lens which has been in the proverbial pipeline for some time is the XF 56mm f/1.2. It was announced today along with the black version of the X100s, another product which many Fuji X users have been asking for since the release of the silver X100s.

The 56mm f/1.2 is the latest addition to Fujifilm’s professional-grade lens line-up for X-series interchangeable-lens cameras. With an equivalent focal length of 85mm, it is particularly suitable for portraiture. It offers both fast and quiet autofocusing thanks to its combination of an inner focus mechanism and a DC coreless motor, and supreme image quality with a stunning background bokeh.

It features 11 elements in 8 groups, two ED (extra-low dispersion) elements and one double-sided aspherical element to control spherical and chromatic aberrations. Four of these elements feature convex surfaces to ensure excellent light coverage, even when shooting wide open. Like all premium XF lenses, you will find an aperture ring in addition to the focusing ring. Knowing the great quality of Fujifilm lenses, I have very high expectations for this portrait lens. If you’re interested in more technical details, you can visit the official Fujifilm website.

For those of you who have been longing for a black version of the X100s, your wish has now been granted. Unlike the black X100 which was a limited edition with a higher price tag, the black X100s will cost the same as the original silver.

There isn’t much else to say – the two cameras are exactly the same. I think the X100s black version is beautiful but I don’t feel it makes a lot of sense to trade in my silver X100s for it. I’d just be losing money on the exchange. That said, for those who use it a lot for street photography and want to be even more discreet, an all-black body could be a nice extra feature.

Even more importantly, Fujifilm has updated its lens roadmap to include 2014 and the beginning of 2015. Not only can we see the confirmation of the rumoured 16-55mm f/2.8 and 40-150mm f/2.8 constant aperture zooms but there is also an extreme telephoto zoom lens, an 18-135mm f/3.5-5.6 and  – surprise, surprise – a high speed wide-angle lens as well. The last one intrigues me a lot. Could it be a 24mm equivalent focal length with an f/1.4 aperture? That would be awesome!

These exciting lens announcements are most certainly the ‘preemptive strike’ before the release of the new Fuji X camera. It will probably have an SLR body design similar to the Fujica ST and could be weather-sealed. If this new camera is a direct DSLR competitor (and the announcement of these new zoom lenses above makes me think just that) and offers high speed burst and faster autofocus, Fujifilm could really make a difference this year in the mirrorless world. We only have to wait a little bit more before Fuji’s intentions become clearer!

We don’t tend to talk very much about Samsung on this website, not because we have something against the brand but because the company has an extremely small presence here in Italy. While Samsung USA is charging forward with its #DitchtheDSLR campaign, Samsung Italia seems shy about promoting its interchangeable lens cameras – a shame, really, as they’ve produced some pretty innovative products so far.

A few days ago, Samsung announced that it would be releasing the new NX30 alongside two 16-50mm ED OIS zoom lenses. One lens will have an incredible f/2.0-2.8 aperture while the other will be a pancake with f/3.5-5.6 and Power Zoom.

One of the wildest features is the inclusion of a baby monitor on-camera, but the real attraction of the NX30 lies in the tilt and twist EVF. It features the same 20.3 MP APS-C CMOS sensor and AF performance as the NX300 that came before it.

The new Samsung 16-50mm F2-2.8 S ED OIS lens is the first in Samsung’s premium ‘S’ series. With a fast aperture at all focal lengths, this is definitely a lens that will turn heads at CES 2014.

To see the full press release and tech specs, you can hop over to the official Samsung website!

Which announcement are you the most excited about? 🙂