You are here: Home / Galleries / Olympus Gallery / In search of sharpness: Portrait session with the M.Zuiko 75mm f/1.8 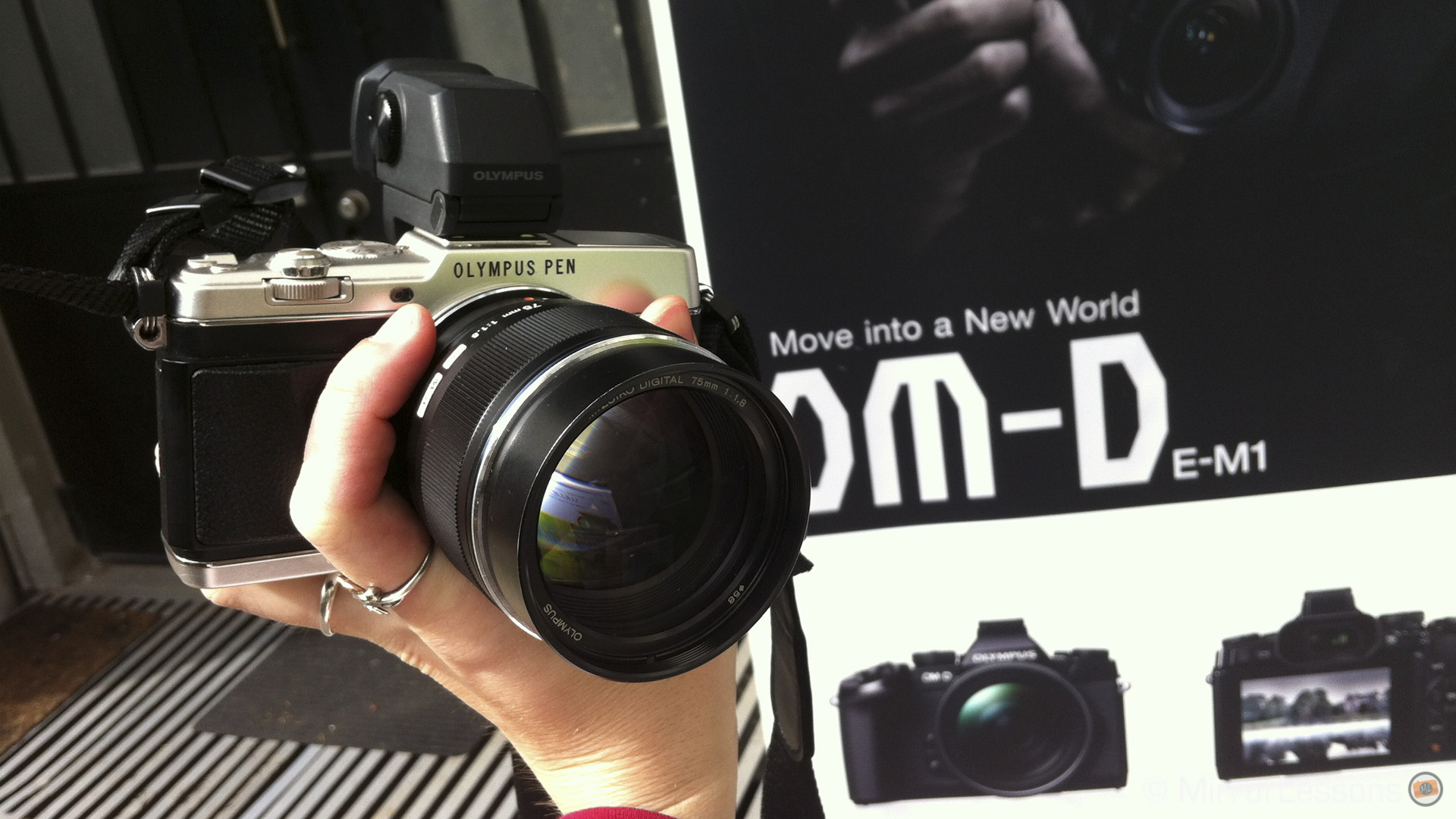 I have long known about the Olympus M.Zuiko 75mm f/1.8‘s reputation for extraordinary sharpness but it was only on Saturday at the Olympus Day held by Polyphoto (the Olympus distributor in Italy) and Riflessi Digital Shop that I was able to try it out during a proper studio portrait session. In fact, the lens never left my Pen E-P5 the entire time I was there, much to the amusement of the Polyphoto representative. I believe his words to Riflessi staff were: you’ve got to give this girl a 75mm, now! If only… 😉

The session was carried out in a small room with a couple of LED panels, a white background and two talented models. Flash wasn’t used for any of the shots. All in all, it was a very simple set up.

Something I love about M.Zuiko lenses, and Micro Four Thirds lenses in general, is their compactness. The 12mm and 45mm are so small that they can slip into my coat pocket, and while the 75mm certainly isn’t pocket material, it is miles smaller and lighter than an equivalent full frame lens. Despite having an all-metal body, I found it light enough to use even for long portrait sessions like the 4-hour one held on Saturday. The focus ring too was smooth and easy to use for the limited amount of manual focussing I did. For everything else I used the MSC (Movie and Stills Compatible) autofocus, which was smooth, accurate and blindingly fast.

If we were to buy this lens (and we probably will sometime soon), the first accessory we’d consider is a lens hood. I’ve never been able to understand why Olympus originally made the decision not to include lens hoods with its premium lenses. Sure, they’re cheap enough if you buy them online from third party manufacturers but given the price we’re already paying for this lens, they should really be included in the package. Thankfully, that’s all changed now with the release of the 12-40mm f/2.8 and 25mm f/1.8, the first M.Zuiko lenses to come with a hood.

Something else I feel Olympus could have added to the lens was weatherproofing but doing so would have no doubt raised the price even more. In the end, it’s a small drawback for what is otherwise a high quality design.

And then we come to sharpness. Ah yes, the one thing that makes you forget the lens hood and weatherproofing issues, and even the wallet-crushing price. Even when wide-open at f/1.8, this lens is tack sharp. Just zoom in onto the eyes of the models to see what I mean!

The lens contains a 9-bladed, circular aperture diaphragm, which gives rise to its smooth and creamy bokeh. For those interested in technical details, the optical formula includes 10 elements in 9 groups with 3 extra-low-dispersion and 2 high-refractive-index elements.

Some might complain that Olympus didn’t make this lens a f/1.4 or even a f/1.2 but doing so would have only resulted in a larger lens and perhaps a less-than-perfect output in terms of sharpness. With f/1.8, we have the best of both worlds: a lovely bokeh with no loss in sharpness whatsoever.

As I’ve already made quite obvious, I was extremely impressed with the 75mm f/1.8 for portrait photography and feel that it would make an excellent addition to Mathieu’s Micro Four Thirds kit as he often has to shoot portraits at various events. I actually surprised myself by not walking out of there with it still attached to my camera. But then again, I’ve always lived by the belief that good things come to those who wait. 🙂

I’d like to send out my sincere thanks to Polyphoto and Riflessi Digital Shop for holding the event!