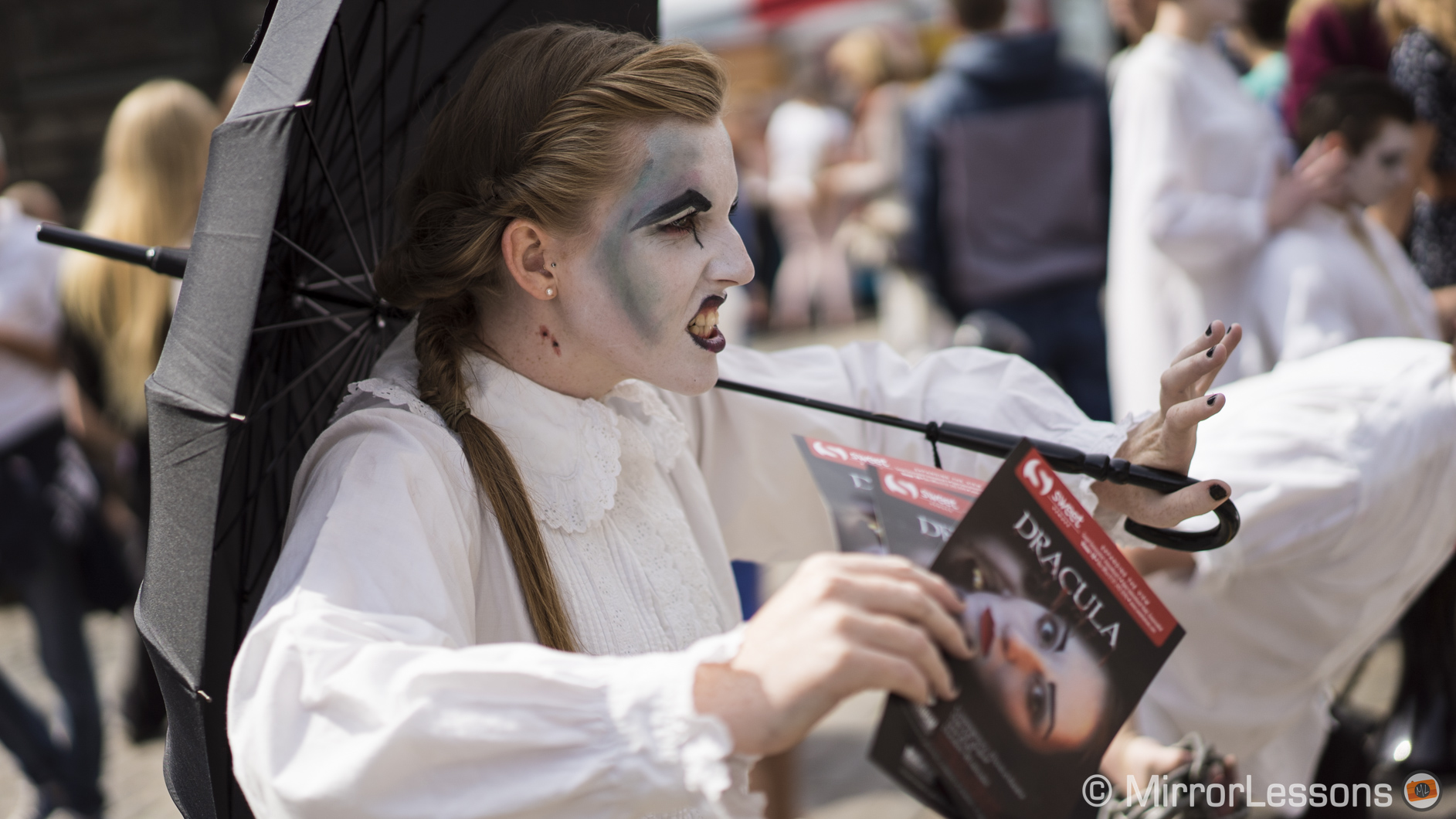 Photographers usually love to own a wide range of lenses that suit different purposes and different occasions but I also think that limiting ourselves to one focal length can sometimes be a good exercise. In my case, the ‘one focal length’ exercise was actually the only option for me with the Sony A7s because I currently own only one lens for the system, the 55mm f/1.8.

I must admit that I am loving the A7s and 55mm combo more and more. The camera works well in all conditions, and won’t abandon you in low light. It can be very discreet yet precise in focusing and metering. The 55mm focal length is also very versatile for subjects as varied as portraits or street shots. 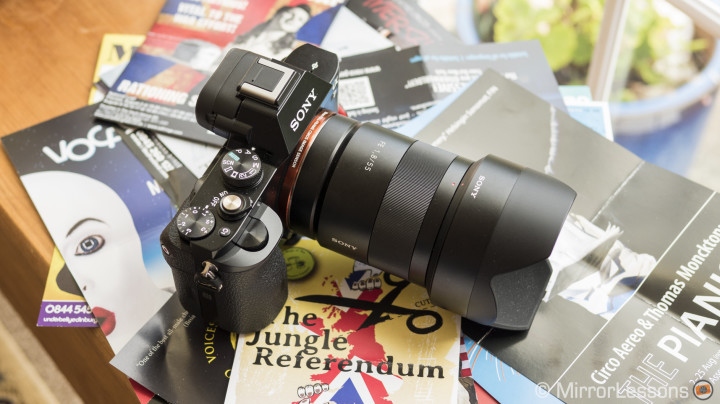 A couple of days ago Heather and I stopped in Edinburgh (Scotland) and we spent an afternoon walking the streets where the Fringe festival was being held. We couldn’t have asked for a better shooting opportunity. I decided to set myself in “reportage mode” and take different pictures to illustrate the festival as best as I could in a couple of hours.

I don’t really have a lot of professional experience in reportage for editorial work but I know that there are a couple of rules to follow. The most important thing is that you have to tell a story, as such you have to consider how you want to illustrate it.

First, it is important to have an opening picture that introduces the event. The picture needs to show where the story is set and what is taking place. In this case I chose something very classic, which is a shot of the Royal Mile High Street where part of the event was happening. To take the shot I climbed onto a small road block to have a better view. Being the most famous street of Edinburgh, it helps to define the location of the event. The crowded street shows that we are in the middle of an event and that it is popular. Finally the “Fringe” banner at the bottom of the image calls the festival name to mind.

Next I included a few pictures to show what exactly was occurring on the street. The main focus was on various artistic companies from all over the world, advertising their show a few hours before it took place.

While I enjoyed trying different angles to capture the action, I also made sure to capture one classic group shot. If you are in a tight space it might be challenging with a 55mm so you have to make sure to find the right distance and grab your chance when there are no people in front of you for a few seconds.

Some artists won’t hesitate to perform an excerpt of their show. In this case I make sure to show the variety of the performances as much as possible.

In a good reportage, it is important to include at least one picture that represents a symbolic action or gesture that shows what is going on. In this case, the gesture that is shared between artists is to hand out flyers with all the information about their shows. They will make sure to give these pieces of paper to as many people as they can and in the funniest way possible (my favourite being one guy yelling “free piece of papers!”).

Then I selected a few pictures that are more portrait orientated. Many of these artists will have no problem posing for the many photographers that populate the streets.

If you happen to recognise some of these artists, it may mean that you saw them somewhere else or because they have gone viral on the Internet. If you are doing reportage, make sure to include at least one picture of them. Below, you can see a member of the Voca People, a very popular group on YouTube.

The festival isn’t only about the different shows taking place in the theatres but also about the artists performing in the streets and asking for some money in return.

We are in Scotland, so how could I not include a musician playing the bagpipes?

The first picture at the beginning shows a crowded street from a high angle, but while shooting I also wanted to represent the sheer number of people present by choosing the point of view of someone in the middle of the crowd.

Finally, I also chose some pictures that represented a little bit of backstage, like an artist resting on the ground or a group using their acrobatic skills to attach a poster.

The final shot is of this very nice dog resting with a “Fringe festival” badge around his neck, which is an amusing conclusion to the series.

In a case like this, the most difficult part is selecting the pictures. A good reportage usually doesn’t exceed 10 pictures. Of course it can depend on how many pictures are needed for the article and how long the article is if we are talking about editorial reportage. More pictures could be chosen if they need to be published in a book or a magazine insert that is specifically related to that event for example. I chose to show you more than 10 as I wanted to show you the process I followed while taking them. If I had to make a final selection, it would be the following:

Let’s not forget that for editorial work the final decision isn’t made by the photographer. In my case I also post-processed the pictures but again it could have been done by someone else working for the specific magazine.

It is also worth mentioning that the pictures shown in this article only represent a fraction of what the festival is about. Having only a few hours on the streets I concentrated my efforts on the Royal Mile area. There are many shows taking place inside theatres, on beaches and other locations and the festival lasts three weeks. Imagine how challenging it would be to choose ten pictures after a week of shooting.

Not all of us do reportage photography especially from a professional point of view but I find it a very good exercise that even an amateur who wants to improve his or her skills can do. Learning how to illustrate a good story with a series of photographs can be a good step into photography. Doing it with one focal length only forces you to look for different angles and precise compositions. In my case I wasn’t able to take wide angle shots so I composed some photos in such a way that you could feel the presence of the crowd even when not seeing it all. In compensation, however, the 55mm and its fast 1.8 aperture allowed me to take some great portraits. So, in the end, one lens can push you to approach your story differently.