You are here: Home / Fuji Camera Reviews / Exploring the city of Edinburgh: Thoughts about the Fujifilm X-E2 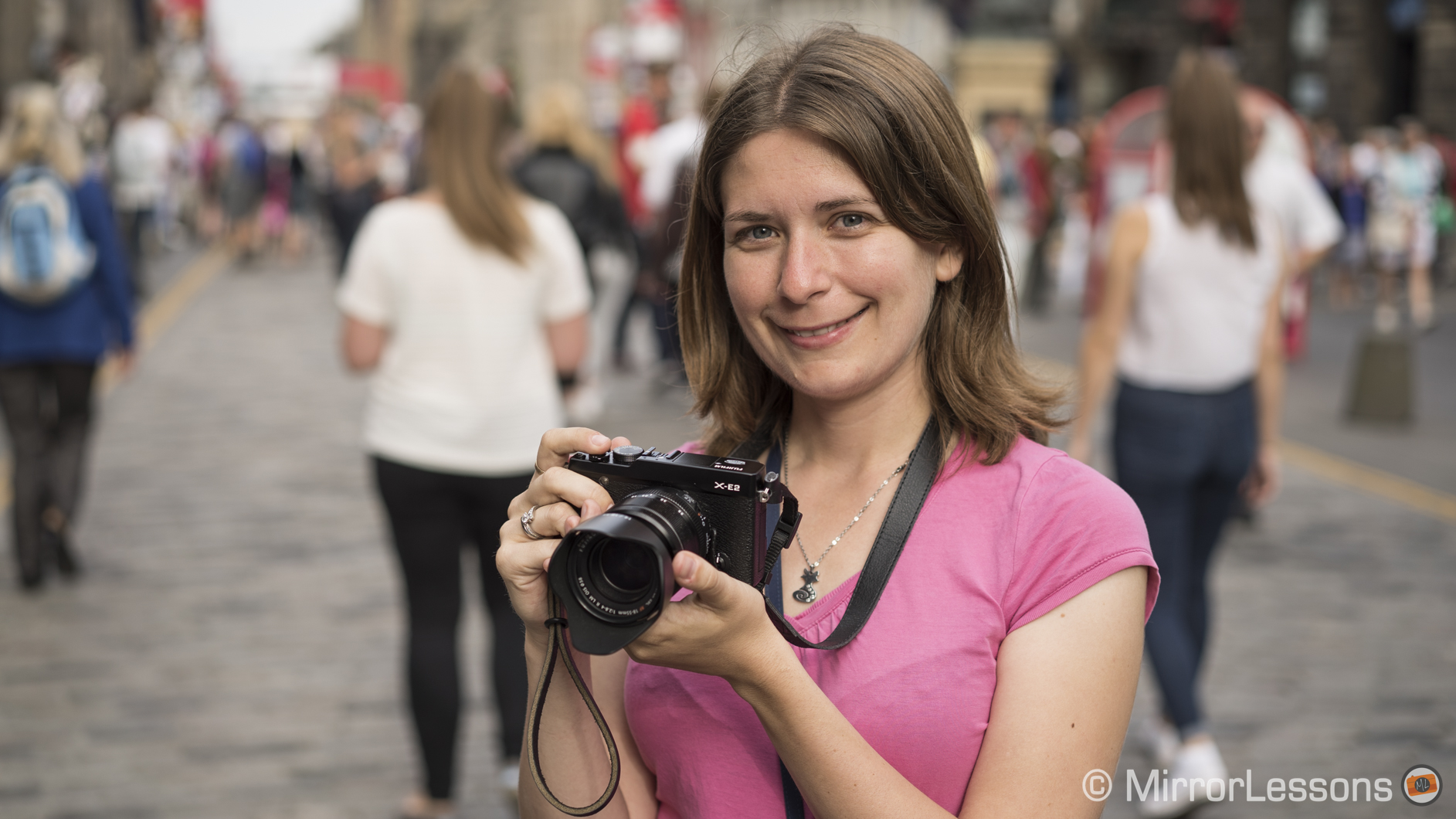 As followers of this blog may know, Mathieu and I spend every summer in Wales where my parents live. Whereas most years we travel straight from Turin to their house, the first stop on our journey back to our “home away from home” this time around was the vibrant city of Edinburgh. Waiting for us there were not only my parents but also two family friends from Canada who I’ve known ever since I was born. To my surprise, one of them had bought a Fujifilm X-E2 especially for the trip after discovering mirrorless cameras through this blog. Since I’d only ever tried the X-E2 once at Fujifilm Touch and Try session in Italy, we decided that it would be fun to switch cameras for the day: he would use our X-T1 and we would take his X-E2 out for a spin.

Though it wasn’t intentional, we ended up spending most of our day at the extremely popular Edinburgh Fringe Festival, walking up and down the same high street numerous times and snapping street portraits of the performers advertising their upcoming performances. It was the perfect setting to casually test a camera like the X-E2.

For 95% of my shots, I used the 18-55mm kit lens that comes with the X-E2. Though I had the 10-24mm and 35mm with me, I wanted to use the camera as it had been sold to my friend, as doing so would give me an idea of the limits and strengths of only having a kit zoom. In the end, I felt that 18-55mm was a good range for the streets since people were performing at varying distances, and it wasn’t always easy to get close due to the crowds.

At a maximum aperture of f/2.8, it isn’t the fastest lens around but for street portraiture this usually matters very little, especially if you want the elements in the background to act as key players in the image as well. When I did want some shallow depth of field, all I had to do was make sure I got in nice and close to my subject.

In terms of pure feel and ergonomics, the X-E2 is one of my favourite Fujifilm X series cameras. The X-Pro1 has always felt a tad too bulky for my liking, while the lack of a viewfinder on the X-M1 makes it difficult to use in some circumstances such as bright sunny days outside. Like the X-E1 that came before it, the X-E2 balances size and functionality very well.

If you are used to the X-T1 as I am, you may find that the X-E2 is lacking quite a few external dials and buttons such as ISO, bracketing, panorama and so on. With the X-T1, you barely have to touch the virtual menu, whereas the X-E2 will require some minimal menu digging to adjust any setting that isn’t shutter speed, aperture or exposure compensation. It isn’t really a big deal as you have to do the same with all other X series cameras as well, but I must admit that the functionality of the X-T1 has spoiled me.

As street cameras go, the X-E2 is the cream of the crop. Its shutter generates a low and pleasant-sounding thud that won’t cause a passer-by to look twice and its nondescript chassis renders it unobtrusive, particularly if you own the black version. Unlike the previous generation of X series cameras, the X-E2 has a fast and accurate autofocus that is more than suitable for street photography, and even other kinds of photography involving movement as long as the subjects aren’t too quick and move about in a predictive fashion.

A couple of times, I found myself missing the presence of a tilt-screen on the X-E2. (Yes, once again, the X-T1 has spoiled me!) Many photographers say it isn’t a necessity and makes the camera bulkier than it has to be, but for those who enjoy taking photos from awkward angles, a tilting screen is the perfect aid for getting your composition right in-camera. For the shot below, I was almost kneeling on the pavement to see what my composition looked like on the screen.

The electronic viewfinder on the X-E2, however, is a thing of beauty, and with the recent firmware update 2.0, it now has a lag time of only 0.005 sec, which puts it on par with the X-T1. Looking through the viewfinder, the colours are bright, vivid and most importantly, realistic. In fact, our above-mentioned friend told us that the quality of the EVF was the main reason he chose the X-E2 over other mirrorless cameras.

Many, if not all Fuji-toating photographers have complained about the removal of the View Mode button on the X-E2, saying that they enjoyed being able to switch between LCD, Viewfinder and Eye Sensor with the press of a button on the X-E1 and X-Pro1. This function has now been relegated to a submenu that isn’t the easiest to access. I don’t want to create any controversy when I write this but having not used either the X-E1 or X-Pro1 extensively, for me personally, there is nothing to miss. Added to this is the fact that I almost always use the eye sensor, so it isn’t a problem for me to dig into the menu every now and then to switch over to the LCD or viewfinder. My feeling is that the removal of this button is more problematic for those who already own an X series camera than for those just starting out with the series.

Would I recommend the Fujifilm X-E2 to a photography enthusiast thinking of venturing into the mirrorless world? Without a doubt, yes. And the great thing about the X-E2 is that it has come down in price since the release of the X-T1, and its price will only continue to drop after Photokina 2014. Not only, but we can also expect Fujifilm to continue providing firmware updates for the camera just as it has done for all its models so far.

Note: the latest firmware update is the version 3.00 released in December 2014 that adds several features including the Classic Chrome picture profile. Click here to see a list of all the different firmware updates for the Fuji X-E2.

Do you own the Fujifilm X-E2? If so, what do you like best about the camera? What would you fix?