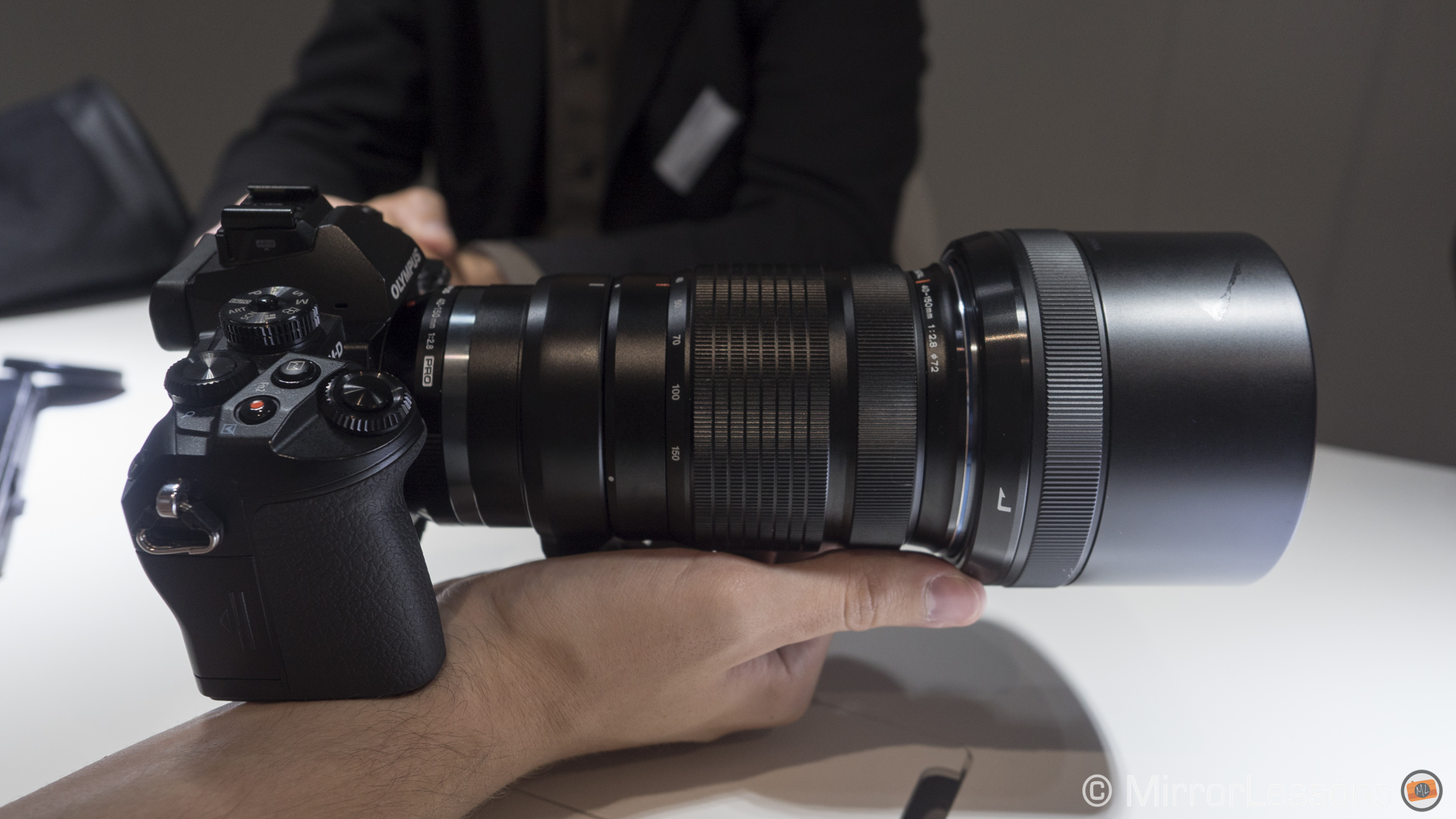 Update: check out our first impressions article with lots of images and video samples!

One of the most interesting aspects of this edition of Photokina is that most mirrorless systems are expanding their high-end products to satisfy professional photographers, and something they almost all have in common has been the decision to release a professional telephoto lens. Perhaps the new M.Zuiko 40-150mm f/2.8 is the most interesting: it is surprisingly light and compact while being the one that offers the vastest focal length range (80-300mm equivalent).

The first important thing to say concerning the design and size of the lens is that the hood can be misleading and lead you to believe that the lens is bigger than it actually is. The hood is definitely considerable but the nice thing about it is that you can slide it back on the lens instead of detaching and reversing it as you would normally do with most lens hoods. You can achieve this by slightly turning the dedicated ring on the hood, which is a very clever mechanism that will avoid the hood being pushed back accidentally. (The 60mm macro hood also slides back, but doesn’t have a safe lock mechanism).

If you detach the hood from the lens, you realise that it isn’t big considering its f/2.8 constant aperture and the focal length it covers. The lens is 16cm long with a diameter of almost 8cm (filter diameter is 72mm). 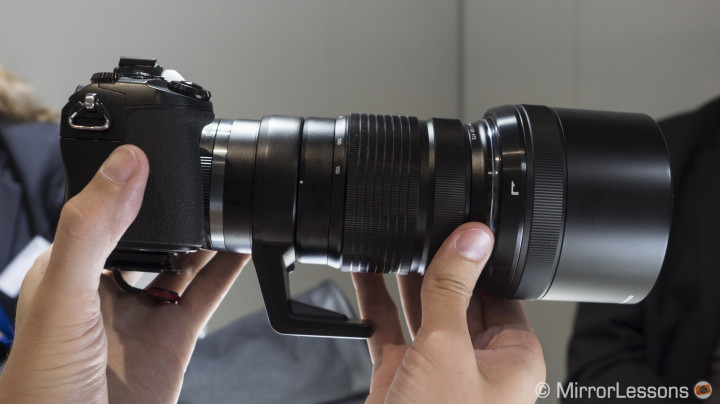 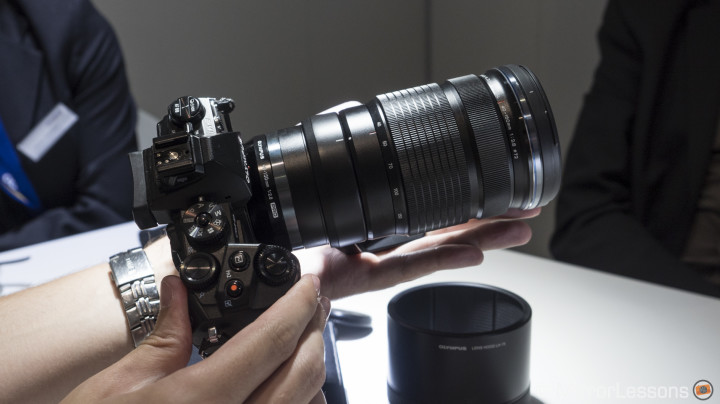 The lens is also surprisingly lightweight. You can see proof of this when you set the E-M1 and the lens on a table with the tripod adapter–you notice that the E-M1 tilts back and touches the surface of the table. The lens weights 880g with the tripod adapter and 760g without it. Just for reference the E-M1 weighs 497g (including battery and SD card) and the battery grip is 286g (including battery) so the whole combo gives you a weight of maximum 1.66kg. Actually, I also found that the lens is easy to use even without the HDL-7 grip for the E-M1, as the weight of the lens doesn’t unbalance the grip. 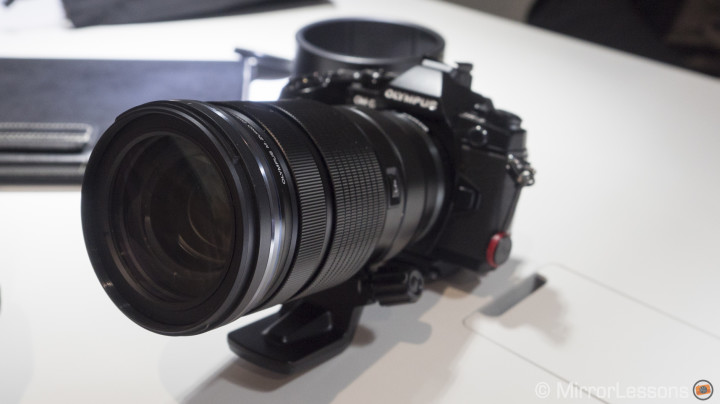 The autofocus was really fast and totally silent in my quick test and I didn’t notice any sort of hesitation or back and forth movement of the lenses.

The 40-150mm f/2.8 has the same build quality as the other Pro lens, the 12-40mm f/2.8: the same metal finish, and the same dust, splash and freeze proofing. The focus ring can be slided to instantly switch to manual focus and there is also an Fn1 button on the side.

I cannot say anything about image quality yet since the lens was a pre-production model so I wan’t authorised to take pictures. But we should receive a final sample for testing very soon. 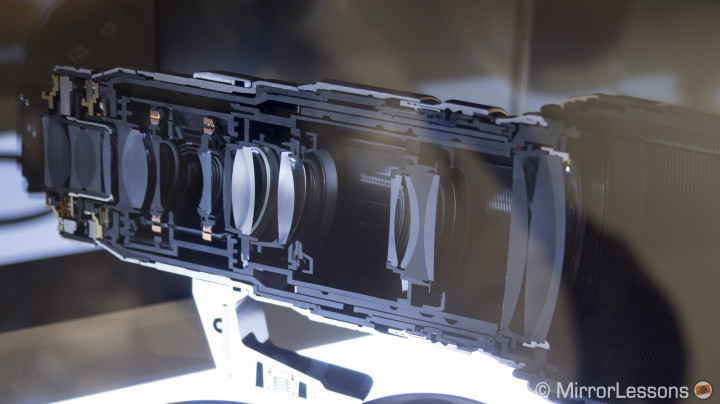 The next Pro lenses, the 1.4X Teleconverter and why wildlife photographers will be happy 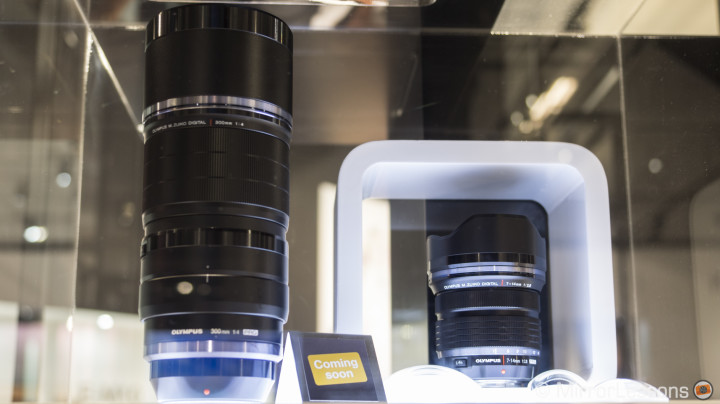 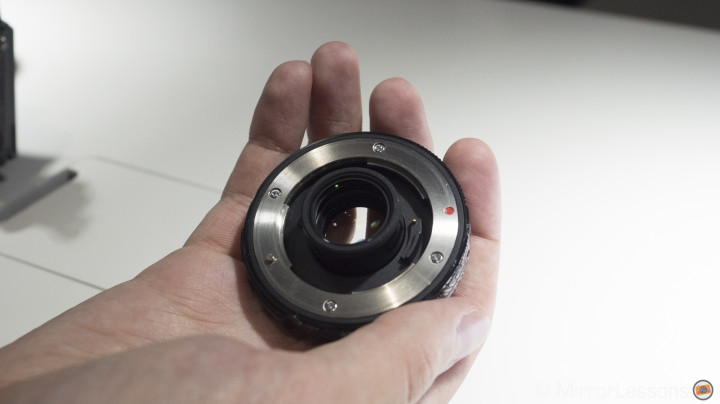 It might be too early to say but I think Olympus is on a very good path with the new Pro lenses. Many people are enthusiastic about the 12-40mm and this new telephoto lenses combined with the 1.4x converter can offer a true high quality alternative to DSLRs for wildlife and outdoor sports photography. Particularly for wildlife photographers, who usually move around a lot by foot for several hours or days, the ability to carry that kind of extreme focal length in a (relatively) small package is something that might become difficult to ignore.

Professional quality in a compact package reaches a new level

It is hard to say anything yet about a comparison between the 40-150mm and the Lumix 35-100mm f/2.8 except the obvious: the Lumix lens is around half the size and weight and you might wonder if those extra 50mm (100mm equivalent with 35mm format) are worth the higher price, size and weight. I think that two key factors will help clear this up: the image quality between the two lenses and also the 1.4x converter that will in fact increase the capabilities of the 40-150mm f/2.8 even more.

And though I don’t like to repeat myself, while it is bigger than many other MFT zoom lenses, it might still be a game changer for someone who uses the same type of lens on a DSLR. Building a high quality lens like this one is one way of meeting the requirement of professionals and the proof of this is that several competitors in the mirrorless segment are releasing the same type of lens (Fuji, Samsung, Sony). The M.Zuiko 40-150mm is actually the smallest and lightest of them all. 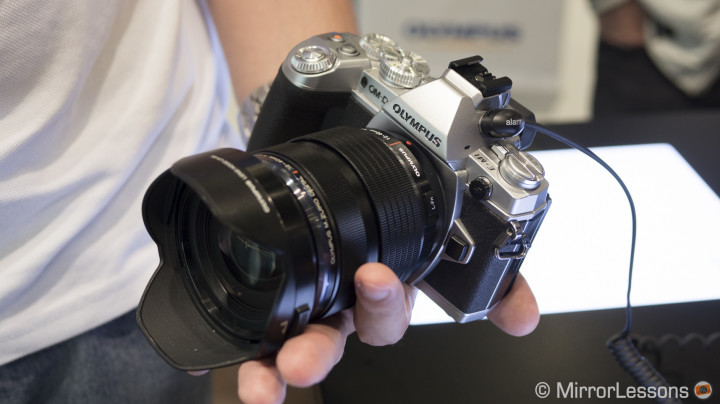 We also had a look at the new silver E-M1. There isn’t anything different about it compared to the black E-M1 except the color. The camera certainly looks nice but I still prefer the black E-M1 as it matches the colour of the Pro lens lineup as well as the battery grip. Olympus decided to release a silver E-M1 after hearing customer feedback. When the first E-M1 was released one year ago, we asked about a silver version of the camera but it hadn’t been planned at the time. Overall, we prefer the look of the silver E-M5/E-M10 to that of the silver E-M1, but it still remains a beautiful camera.

Finally as a specie bonus, you can watch a short time-lapse below during one of the many cleaning service performed by Olympus staff at Photokina. Olympus was one of the only company that provided such a service during the event.