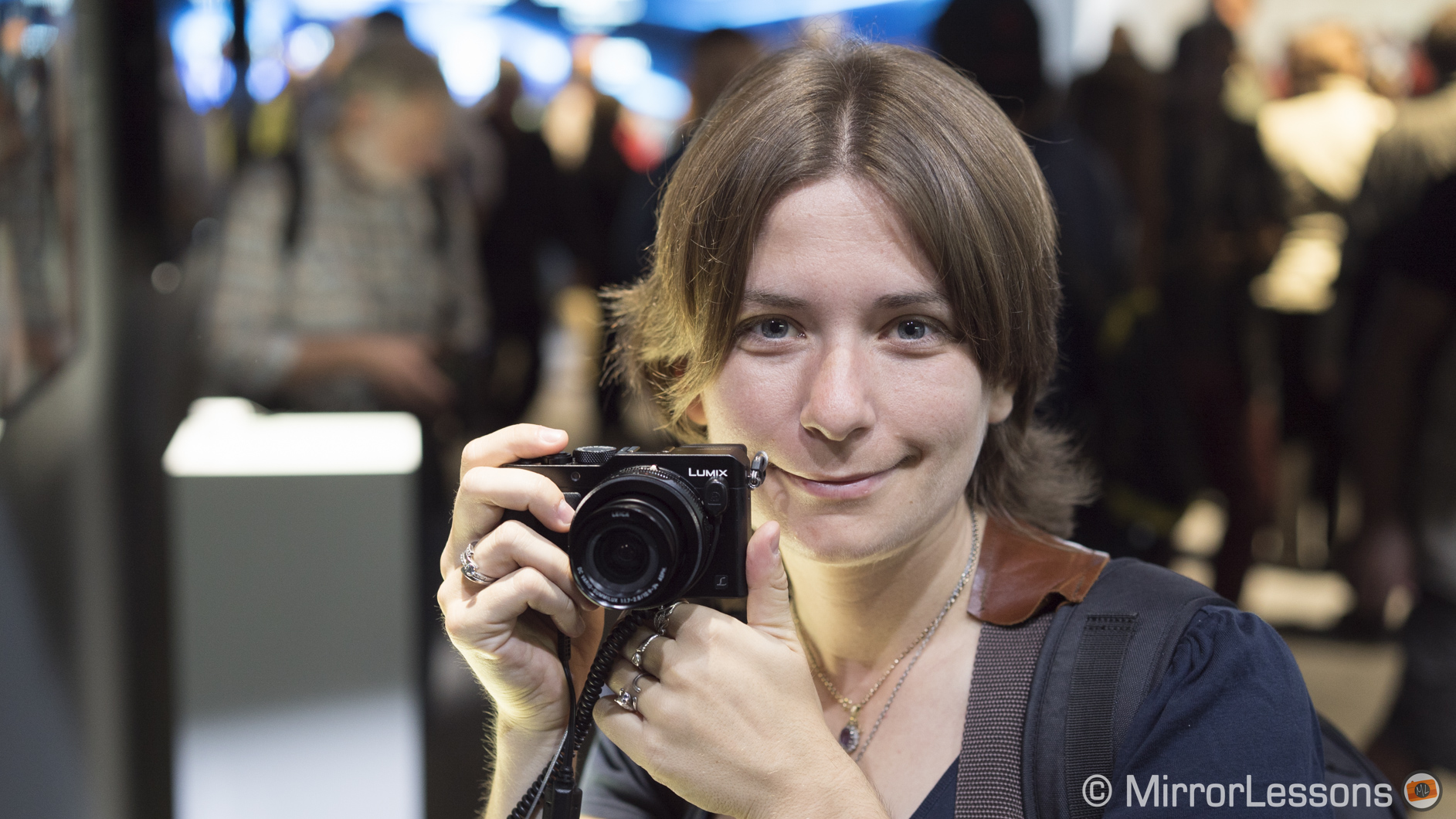 Besides the CM1 smart camera, Panasonic also announced two other cameras at Photokina 2014: the LX100 and GM5. We had the chance to briefly try out both at the Panasonic booth at Photokina, and develop some first impressions about them.

LX100 – The most analog-like Lumix of them all? 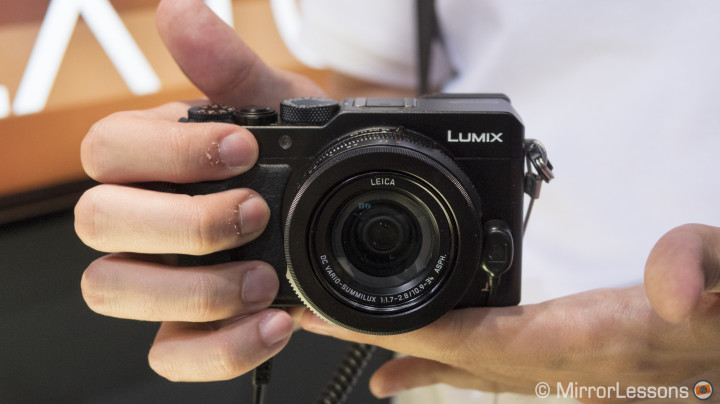 The most anticipated of the two was the Panasonic Lumix LX100, the first premium fixed-lens compact from the company to feature a micro Four Thirds sensor and obvious competitor for the likes of the Canon G1X Mark II. 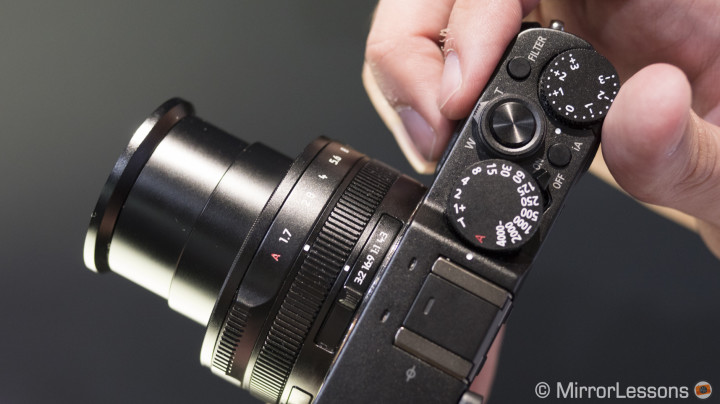 Looking at the design, it bears resemblance to a rangefinder camera even more than the GX7 does, with its dedicated dials for shutter speed and exposure compensation, and aperture ring around the lens. There is no doubt that this is an attractive camera. In addition to these basic controls, on the top you also have an iA (intelligent auto) button snugly placed between the two dials and a filter button in the top-right. Honestly, I am not sure about the necessity of these two buttons as the target users of this camera (advanced amateurs) are probably beyond using auto modes and filters for their photography.

On the rear of the camera, Lumix users will find many familiar controls including the Q menu button, control ring, playback button, various function buttons and more. No big changes here! 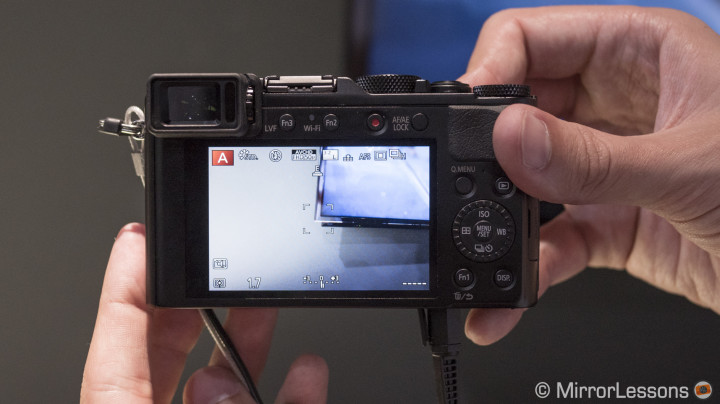 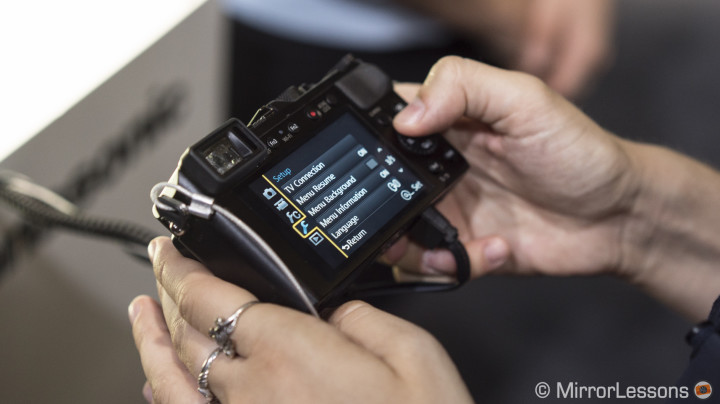 The Leica branding extends to its fast 24–75mm (35mm equivalent) f/1.7–2.8 zoom lens as well, which provides an easy focal length range to work with for all sorts of photography. This is perhaps the most attractive aspect of this camera: considering the big sensor, Panasonic and Leica managed to pack a very fast zoom lens into a relatively small body. As such, it should be able to suit the demands of various photographers including professionals who want something smaller and easier to carry around without having to sacrifice image quality.

The zoom is electronically controlled by a sprung lever, which is a surprise as everything else about this camera seems to gravitate towards the essentials of photography. I personally would have preferred a dedicated zoom ring like the one on the Fujifilm X30 instead. 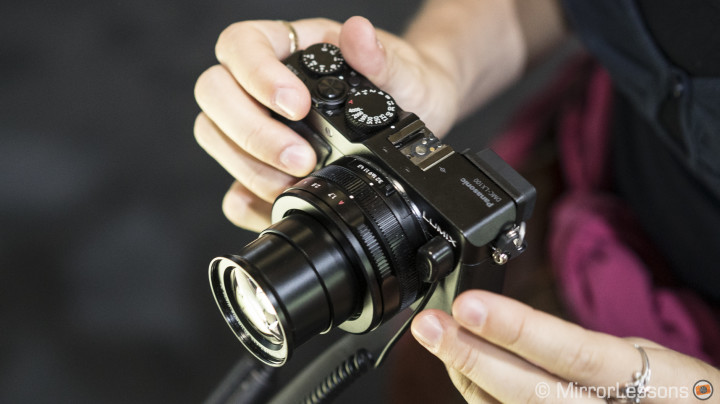 The body is very nice to hold, with its solid rubbery grip on the front, comfortable thumb rest on the back, and smooth exterior. In fact, it reminds me very much of the interchangeable Lumix GX7’s ergonomics, a camera which I was loath to sell.

Unlike the GX7, however, the LX100 does away with all tilting functions. Neither the LCD (3-inch 921,000-dots) nor the viewfinder (2,764,000-dots) can be tilted up and down, but both are bright and saturated with a high resolution. Unfortunately, they’re done away with the touch sensitive feature of the LCD as well. I can only wonder if this is another way of getting back to the basics.

Since there was quite the queue to see this camera at Photokina, we didn’t have much of a chance to test the image quality, but we did get a few quick shots. Now, there is an important aspect of this camera to highlight that can also explain how Panasonic managed to fit such a fast lens and large sensor into such a small body. The LX100 uses multi-aspect technology (like the LX7, GH1 and GH2 for example). This means that the camera doesn’t use the entire surface of the sensor but just an average of 3/4 of it depending on the aspect ratio selected. This also means that the aspect ratios are real and not the result of a crop like on a normal MFT sensor. The LX100’s sensor has the same 16-megapixel Micro Four Thirds sensor found on the GX7 but with an effective resolution of 12.8 megapixels. In our experience, the added creative encouragement offered by the multi-aspect approach, combined with a conveniently-placed aspect ratio switch on the lens is more valuable than the couple of extra megapixels and the larger lens that a full-sensor design would require.

Below you can see a few OOC JPG images taken with the camera at the Panasonic booth. I’ll be very curious to see how it performs against the GX7 and GH4 when we get one in to test thoroughly!

As for the autofocus, it has the same DFD contrast detect autofocus system as the GH4 and seems to work very well even in low light. This aspect will of course require more testing in the future.

Some other things we saw but didn’t get to test on the LX100 are 4K recording at 30fps and the 4k Photo Mode that allows you to extract 8MP still images.

While many people are charged up about the LX100, I am left wondering whether the camera is effectively filling a gap in the Lumix line-up, or if it is simply there to provide other premium compacts with competition. While they are different in terms of sensor size, to us this camera looks like a competitor for the Sony RX100 Mark III or Canon G1X Mark II. They are all compact cameras with a large sensor: the Sony wins for its compact and pocketable design, while the Canon has the biggest sensor. The LX100 could perhaps be the perfect synthesis of the two. Of course these are all just first impressions–confirmation of these thoughts will come with our full review!

GM5 – A small EVF on an equally small body 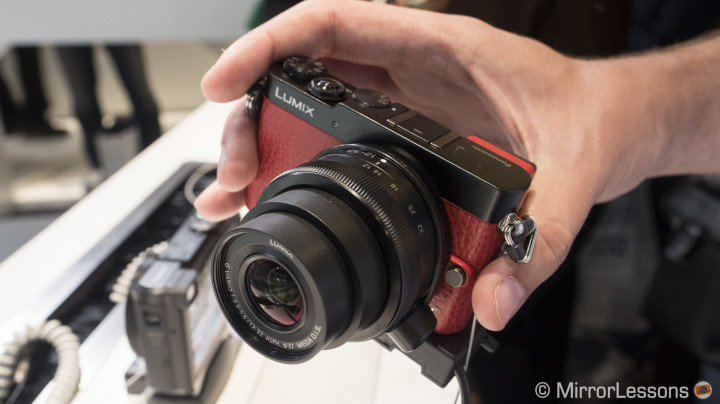 First we had the miniature GM1, which made high-quality pocketable interchangeability a reality. Now we have its successor, the Panasonic Lumix GM5, whose main attractive feature, besides its diminutive size, is the built-in viewfinder.

I will be honest and say that I really did get much time with this camera because of the queues once again. As such, I narrowed my aim down to finding out a) how the size of the body compared to the GM1 and b) whether such a small viewfinder could work on such a minute body. 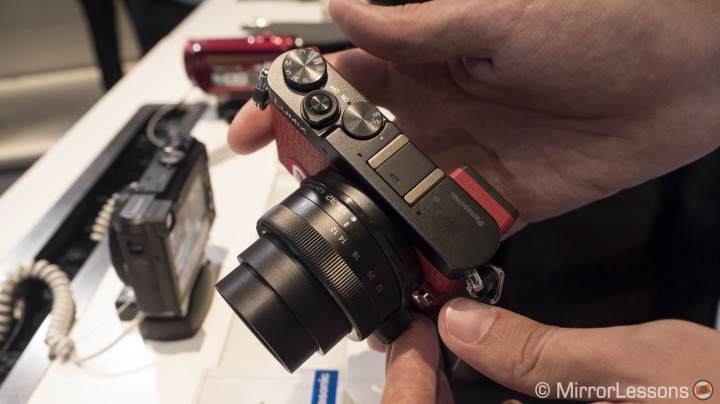 Regarding the size, it indeed retains the compactness of the GM1, making it the perfect companion for casual street or family photography. You can basically slip it into your handbag and forget about it, as it won’t take up any more space than your wallet or smartphone. You can see a picture below showing the two models side-by-side. Besides the EVF, the most notable difference is the button layout on the rear.

As for the 1,166k-dot electronic viewfinder, while the resolution and brightness was up to standard, I found it a bit too tiny to be practical. For a viewfinder to be comfortable, I feel it should be at least the size of the one on the LX100. That said, it has a 100% field of view and 100% colour reproduction like the GX7, and gives users an alternative when an LCD screen isn’t enough.

The camera features the same Micro Four Thirds sensor as the GM1, and does not fail to include many of the Lumix line’s best features such as a touch screen, silent shooting, Wifi, 1/16000 of a second electronic shutter speed, a newly added hot shoe, and full HD movies at 60p in AVCHD and MP4.

Two new lenses have also been released especially for the GM5, though they can be used on any MFT body. The 35-100mm f/4-5.6 is a more compact version of the 35-100mm f/2.8 and features Mega Optical Image Stabilisation, whereas the 14mm f/2.5 II sports a stepper motor feature for quieter focussing. We were only able to see a pre-production version of the 35-100mm, and it is indeed the perfect size for a camera like the GM5.

The LX100 gets the red dot treatment

We all know that Panasonic and Leica are as thick as thieves, so it was no surprise to discover that Leica decided to rebrand the LX100 as the Leica D-LUX (type 109).

How do the two versions differ? Well, according to a Leica representative at Photokina, there are only a few very subtle differences between the two. First of all, the Leica version lacks the grip found on the original. It is also supposed to produce more natural-looking JPGs. What’s more, in the Leica kit you receive a CF D flash unit to go along with the camera, as well as Lightroom for free. And of course you have the pleasure of seeing the red Leica dot on the front of the camera body. Besides these small points, the two cameras are identical, but it was fun to check out the deluxe version anyway! 🙂