You are here: Home / Camera Reviews / Medium Format in a small package? – First impressions of the Sigma DP2 Quattro 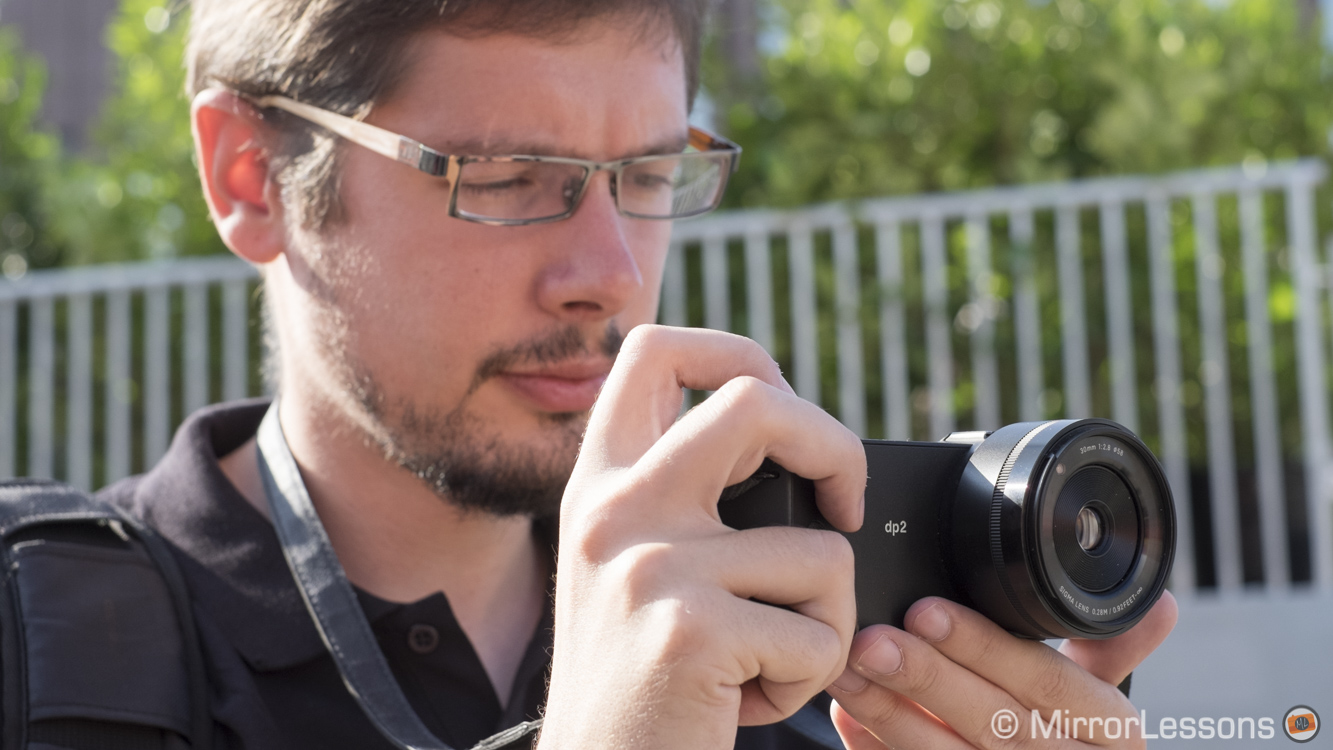 During Photokina we paid an enjoyable visit to the Sigma booth to meet some managers from the UK office. One of them was kind enough to let me play around with the Sigma DP-2 Quattro inside the Koelnmesse. It was certainly a better way of quickly testing a camera than being confined to the booth area!

The DP2 Quattro is the latest generation in the Sigma DP series which consists of three different cameras with a Foveon APS-C sensor and fixed prime lens. The difference between the three all comes down to focal length. The DP2 has a 30mm f/2.8 which corresponds to a 45mm in full frame format. 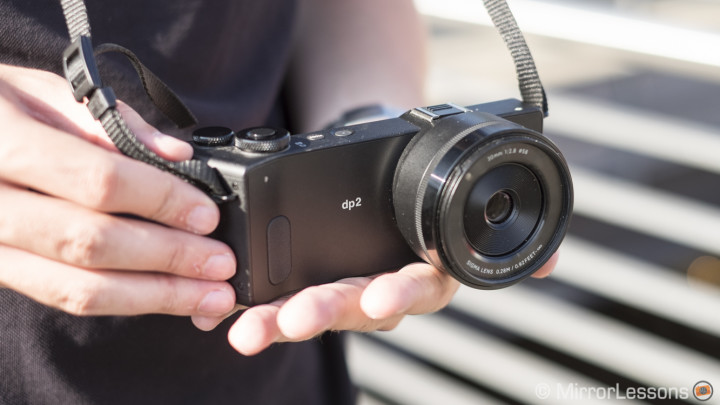 The Quattro series brings a renovated and modern design to the Sigma DP line. The Quattro is immediately recognisable for its long and slim body, which makes it the largest compact camera I’ve ever held. It isn’t heavy as it weighs only 395g but due to the length, you will be prompted to use it with both hands all the time, also because it doesn’t include built-in stabilisation. 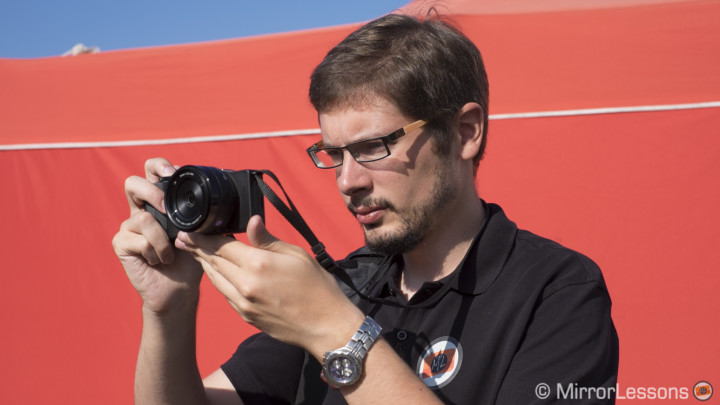 The Quattro design seems to be either something you love or you hate. Personally I found it very comfortable to use in the 30 minute session I had with the camera. The grip is solid and robust and the camera is very light so you don’t get tired quickly. The button layout on the rear is cleverly designed with a QS button (Quick Settings) that allows you to rapidly change the main settings of the camera. It is also nice to have a dedicated button and arrow pad for the autofocus points. The pad of course can also be used to navigate the menu. On top, instead of a mode dial you just press a button to quickly switch between manual, aperture priority and other shooting modes. Aperture and shutter speed can be adjusted with the two dials on top of the grip. They are comfortable to use and easy to reach. 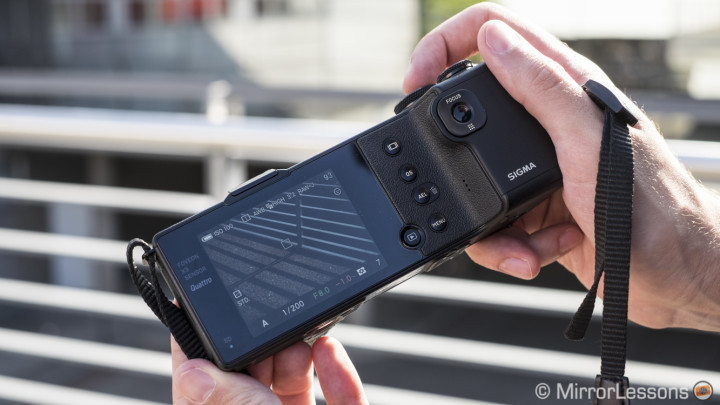 The LCD screen is sharp and up to today’s standard but isn’t the brightest I’ve seen. The camera doesn’t have a built-in EVF. There is however an external optical viewfinder available (the VF-41) and an LCD viewfinder, which is basically a loupe that cuts out outside light and allows you to use the LCD as a large electronic viewfinder. If you shoot a lot in sunlight I would recommend the loupe as the LCD screen can become almost unusable.

Before we proceed any further, it is important to understand this: the Sigma DP series is different than your average premium compact camera. The reason is mainly the sensor which features different technology than the traditional sensors we find in most digital cameras.

The most common sensors used in our digital cameras are Bayer sensors. Bayer sensors are composed of photosites that each have a single light sensor only. So each photosite can capture only one of the three primary colours: red, green or blue. To get the final image, a interpolative process (or demosaicing process) is required to reconstruct the final colour image.

The DP Quattro features a Foveon X3 Direct Image CMOS Sensor. Foveon technology is different than traditional digital sensors because it features three vertically stacked photodiodes, each one aimed to capture one of the three RGB colours (Red, Green and Blue respectively). This means that the Foveon X3 sensor doesn’t need a demosaicing process but rather combines the signal from all the stacked photodiodes in order to create the final RGB output.

Translating all this in more concrete terms, it means that the Foveon X3 sensor should be capable of delivering not only better and more natural colour renditioning but also textures and sharpness. The sensor doesn’t include any kind of AA filter either.

To fully understand and take advantage of the Foveon sensor, a few images shot in a half an hour certainly aren’t enough. What’s more, the Foveon sensor is known to give the best performance when you print and this is certainly something that we will have to consider when we get the chance to write a complete review of the camera. But is there an immediate difference even when looking at just a few images?

Well, the first thing you will most definitely notice is sharpness and detail. The DP Quattro is extremely capable of rendering beautifully complex textures like leaves on a tree or make visibile even the smallest details in the background. What is more interesting is that the sharpness doesn’t appear exaggerated or boosted in any way. It is very natural yet you can clearly detect every small detail in the textures or even the smallest element in a picture. See the three 100% crops below as an example.

Of course this kind of technology brings some limitations. The first is related to low-light performance. There is some little noise already at 200 ISO and the pictures are usable up to 800 ISO. Past 1600 the camera shows its limits. Dynamic range is also another aspect that needs to be put more seriously to the test. Depending on the picture profile you choose, the camera is capable of delivering great detail in the shadows (the natural profile is the best for this). But the X3 raw files aren’t as flexible as other RAW files, and highlights and backlit situations seem to be a weak spot of the sensor.

The shots I took with the camera aren’t enough to judge the lens either but we can see that it delivers stunning sharpness when coupled with the Foveon sensor, even at the corners. The only weak point could be some lens flare but I didn’t have a lens hood with me and that could have helped.

The autofocus on the previous DP cameras wasn’t a strength by any means but Sigma did manage to improve this on the new Quattro. In my short test, I didn’t find any particular problems. The camera isn’t the fastest I’ve tested for quick locking but it doesn’t hesitate too much and is quick enough for a regular use. I haven’t tried it in low light but I can expect a decrease in performances.

Neither the camera nor the lens include stabilisation and other aspects like continuous shooting capabilities are limited. The writing speed on the SD card is also slow. Admittedly I didn’t insert the fastest memory card but it clearly takes more time than other cameras.

The X3 files can be post-processed with the dedicated Sigma PhotoPro 6 software only. It isn’t the fastest software available but I found it easier and more powerful to use than most people say. Converting images from RAW to Tiff on my Macbook Pro Retina took an average of 25s per photo. So of course if you have hundreds of pictures to convert, it will take a while. 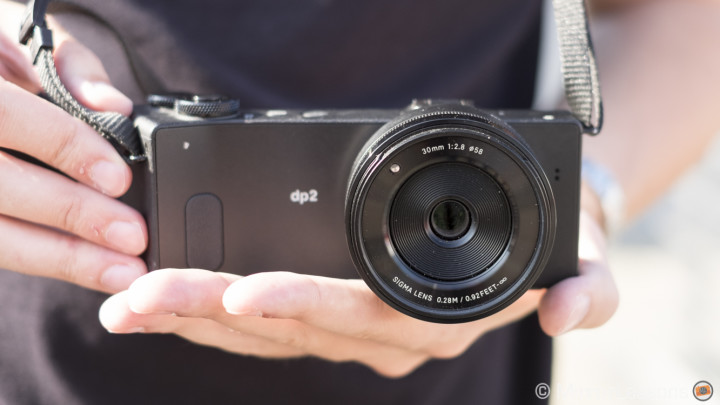 The DP Quattro is certainly a fascinating camera. It isn’t your usual large sensor compact camera. It isn’t suited for action and probably many other genres that require a versatile and fast camera. Rather, its unique sensor technology makes it very interesting for landscapes and fine art photography, especially if the final destination is printing. The Foveon sensor certainly shows a lot of potential for details, texture and colour rendering.