You are here: Home / Camera Reviews / Could it be a (r)evolution? – First impressions of the Lytro Illum light field camera 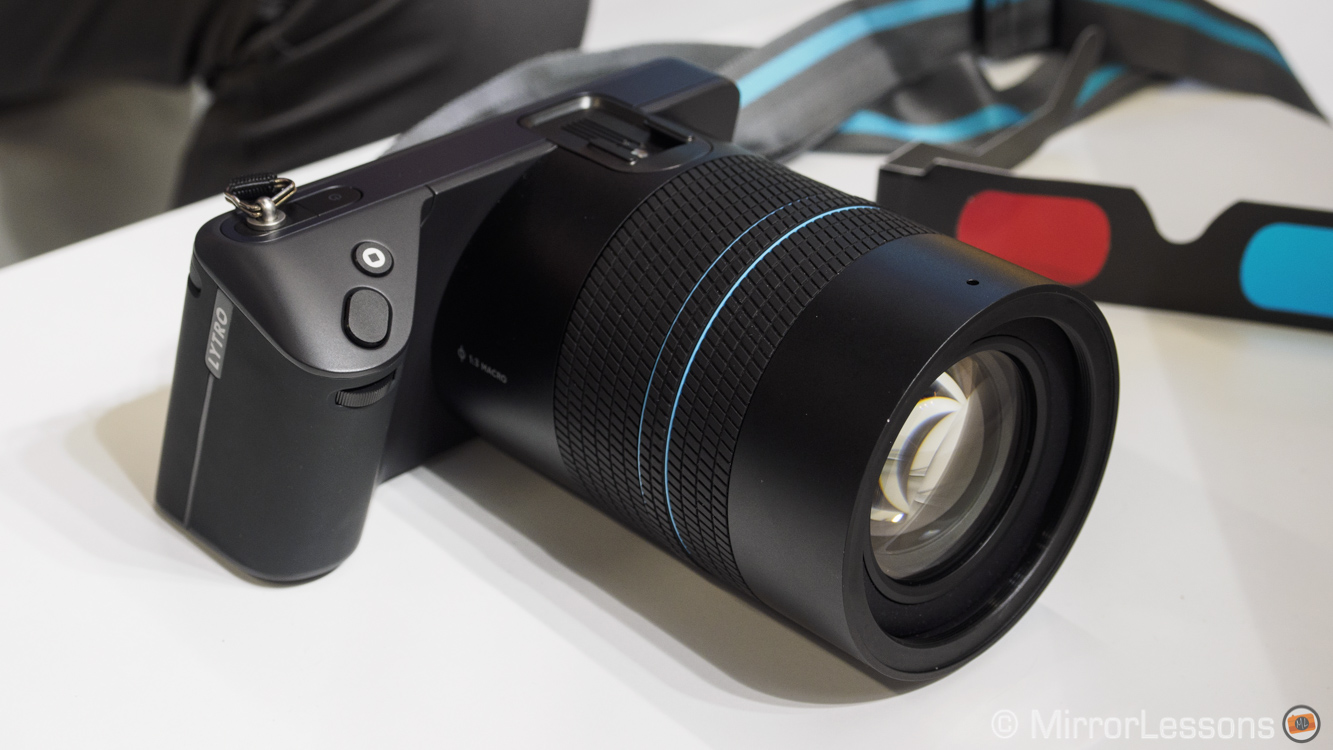 Since its announcement in April earlier this year, I’ve been very curious about the Lytro Illum because it offers something that none of the other digital cameras out there can: a new way of shooting and seeing photographs, and as such, a new and original tool to be creative with. But while the idea sounds appealing, it is only when you actually see and play with the camera that you start to realise how much potential it has.

Some of you might already know what Lytro cameras are, but just as a reminder, the Illum has a sensor based on light field technology. The sensors is covered by micro lenses that capture the entire light spectrum of a scene. The proprietary camera software can then determine the direction of the light rays. As a result, you can change the focus point of your image as well as its perspective after the shot has been taken. 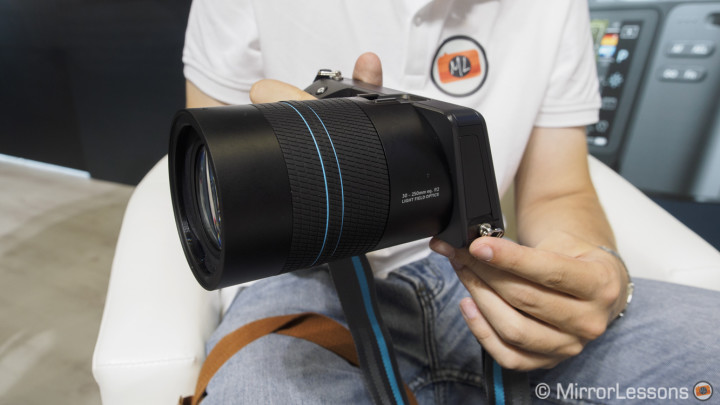 The Illum is the second generation of Lytro cameras and the first that actually looks like one. The camera also packs a new generation sensor with an ISO range of 80 to 3200 and an impressive f/2 constant aperture zoom with an equivalent focal length of 30-250mm. The sensor is almost 1 inch large (1/1.2) with 40 “megarays” of resolution (that’s the unit used to measure a light field sensor). It corresponds to an average of 4 megapixels. Yes, this is nothing exciting compared to the type of sensors we are used to these days but it would be a mistake to draw a direct comparison. One of the reasons is that images shot with the Illum are meant for digital content, like publishing on the Internet or showcasing on an iPad. There is no printing involved because it would simply not make sense due to the lack of resolution and the loss of interactivity, which is the main reason you would be interested in this camera. It is a tool unlike any other and therefore doesn’t replace anything but instead gives us a new perspective. 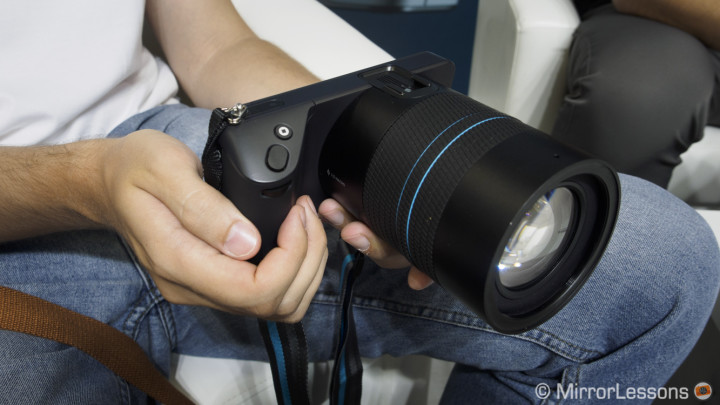 The Illum has an interesting and very modern design. The camera is actually quite large and heavy (almost 1kg). The body feels solid and is made of magnesium and aluminium, and the grip on the lens ring is also very nice thanks to the “tyre-like” rubber that covers the rings. One thing I don’t like is the smoothness of the zoom and focus ring, as they can shift with the mere brush of your fingers. The button placement on the other hand is comfortable and there is also the possibility to interact with the large 4” touch LCD screen. Unfortunately, the resolution is low (800 x 480) in comparison to today’s standards. 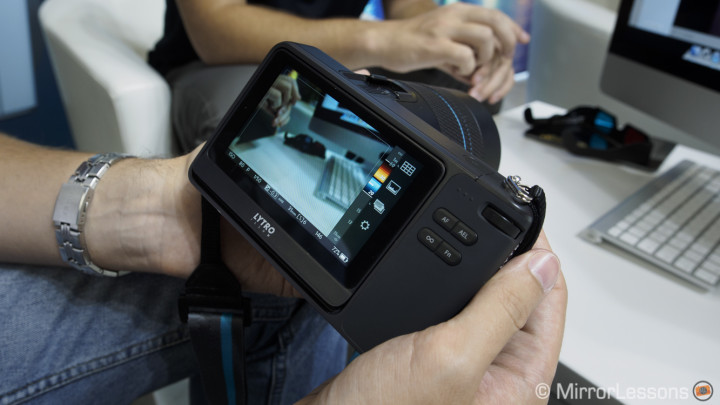 There are also a number of tools on-screen to help you better compose your image, and most importantly, choose the defocus range. Defocus range means the amount of depth of field that you will be able to control after taking the picture. The best way to do this is to activate focus peaking (through the Lytro button next to the shutter button) and use the histogram on the right. The focus peaking consists of two colours: the blue peaking will tell us the closest range while the orange peaking will show the farthest range of the defocus zone. Anything highlighted by one of the two colours in our picture can be refocused after. 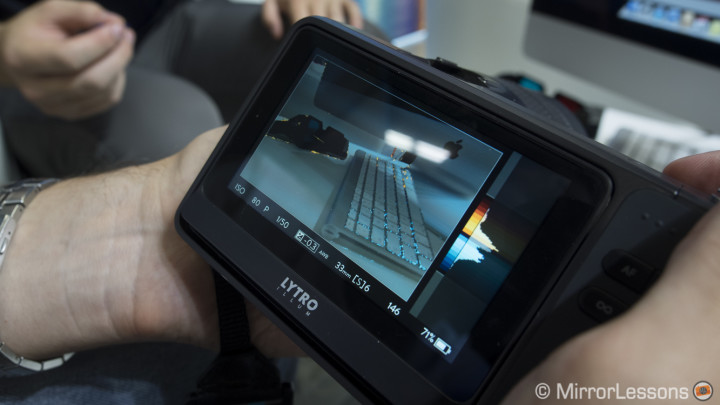 Of course it takes a bit of time to assimilate all this information and be able to take pictures quickly. This means that it takes time to get the composition right with the Illum. It isn’t your usual point-and-shoot where you can frame in a matter of seconds.

Of course the camera has autofocus, so once you’ve worked out your defocus range, you can focus on a dedicated object or part of the scene and take the shot. Note that where you select your AF point matters little since you will be able to change it after. The AF is relatively quick and the lens allows you to focus really close. You can also manually change aperture or shutter speed as well as select ISO levels. The camera has different modes including Program, Aperture or Shutter priority and Manual.

If you are looking for cutting sharpness, this is not the camera for you. It is not only a question of megapixels, but the overall sharpness of the images isn’t that good compared to traditional cameras. The same goes for colour depth. The corresponding resolution output is 4MP but that applies if you export a traditional “2D” JPG or TIFF.

The resolution of the “living image” is actually lower (around 2.8MP). This is probably due to the fact that a living picture also includes some hidden parts in the corners that you can reveal by slightly changing the perspective. But as I said at the beginning, the interesting thing is the interactive element and not the image itself. Below you can see some samples we took at the Lytro booth and uploaded to Lytro.com (currently the only platform available to share living pictures). They are nothing exceptional but they give you an idea. You can move your mouse over the pictures and change the focus point or the perspective.

The way you post-process the pictures is also different. Once the pictures have been taken, the next step is to upload them to the computer and import them into the Lytro Desktop software. You can import them from a memory card or folder. For the pictures to be ready it takes a while. I imported 12 pictures and it took almost 5 minutes for them to be ready to work with.

The file type is a Light field raw (.lfr) and like a tradition raw file, you can adjust settings such as white balance, exposure, etc. One unique feature is the ability to change the f stop value. Basically the file possesses the data for the entire depth of field, so I can choose to stay at f/2 or go up to f/16 to have everything in focus. Of course changing this value only affects the depth of field and not the exposure. There is also an f/1 value that gives you even more shallow depth of field. 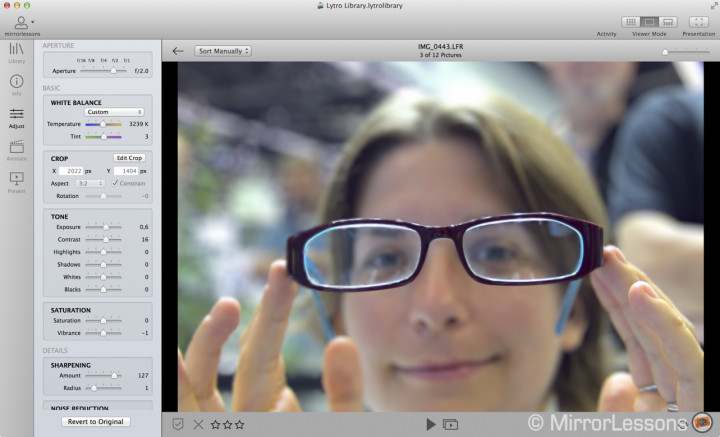 There is also a virtual camera option that gives you a tilt shift effect. You can choose the amount of tilt and rotation. The Lytro desktop gives you other options as well. One of them is to animate your photos and create videos where you see the change of focus point for example. Exporting a 1080p video also takes a long time, considering that the video is just 20 seconds long.

Finally you have the possibility to create a 3D image to showcase as a presentation from the software itself.

Conclusion: a preview of the future?

A brief hands-on at a photoshow booth is certainly not enough to judge a camera like the Lytro Illum. I think it can be a very interesting tool to share pictures in a different way, but only as long as you come up with great ideas to make the most out of this innovative way of sharing images. I don’t believe that simply changing the focus point on a picture is enough to talk about revolution. Certainly it is an interesting technology but as fascinating as it is, I think that shooting with the Illum is actually very challenging. You need a good idea, and a striking composition with the right elements at the right distance to create a series of photographs that not only have continuity but also tell a story through interaction.