You are here: Home / Camera Reviews / Do smartphones and interchangeable lenses go together? – Hands-on with the Sony QX1 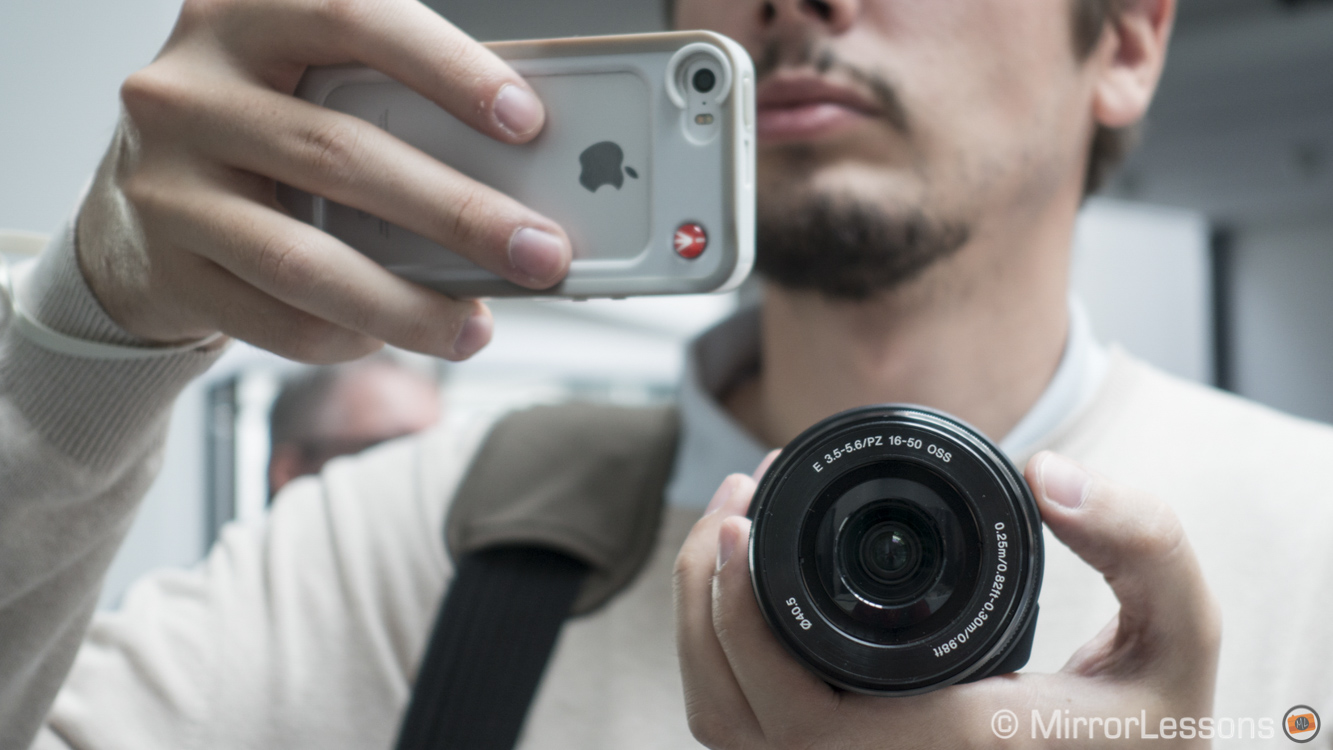 Sony released its innovative Lens Style cameras last year as a response to the increasing popularity of photography performed with smartphones. The QX series consists of lenses that feature the sensor and all the necessary technology to constitute a “proper” camera. What they lack is a traditional grip and an LCD screen but that’s where your smartphone comes into play. By connecting the two devices with Wifi or NFC technology, your smartphone enables you to control everything on screen, from the adjustments of settings to image taking.

While I found the concept interesting and a fresh addition to the market, the idea of having to connect two devices every time I want to take a picture doesn’t really appeal to me. People that take shots with their smartphones do it fast when they see something interesting and they most likely want to share it right away. It’s about moments more than anything else. But when Sony announced the QX1 with its interchangeable capabilities, I was really surprised.

Connecting a lens camera to your smartphone is one thing, but connecting a sensor with a mount that can host proper MILC lenses pushes the boundaries even further. Can it really work?

An APS-C system for your mobile device 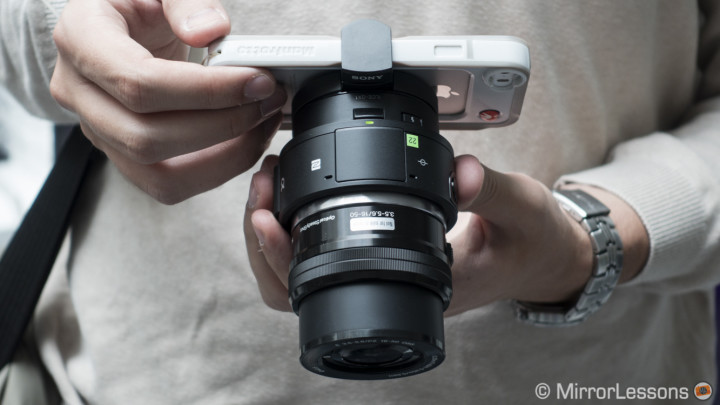 The QX1 has a 20 megapixel APS-C sensor (the same as the Sony a5000) and features the same E-mount found on Sony mirrorless cameras. It features 25 AF points with contrast detection, continuous shooting of 10fps, an ISO sensitivity of 100-16000 and the Bionz X image processor. It even includes a built-in popup flash. Video can be recorded in AVCHD format up to 30p. You can use the same SD cards that you use on you regular camera and shoot RAW and JPG. Basically, you have the same specs and features of a regular Sony camera.

The QX1 is the first lens style camera to feature such a large sensor. The other models have smaller sensors, such as the QX100 which has the same 1 inch sensor found on the RX100 mark II. 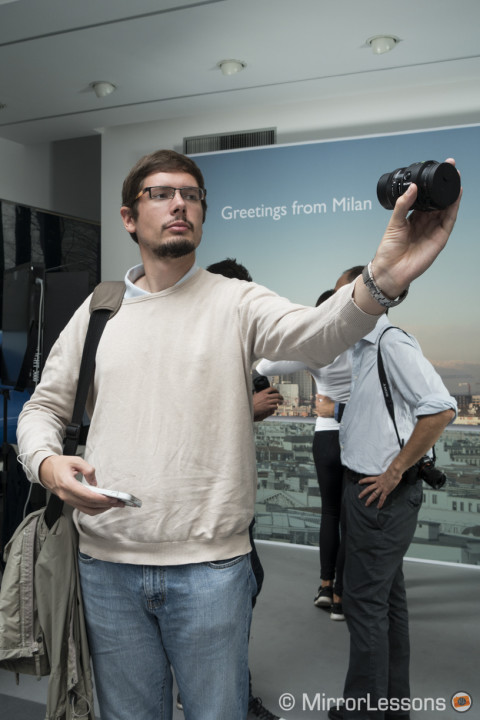 Depending on the kind of mobile device you own, connecting the two products together can be a little bit tricky. I own an iPhone which doesn’t include NFC technology. NFC allows you to connect two devices by simply touching them together. With the iPhone, you have to use Wifi which requires you to turn on the camera, go to the Wifi settings on your smartphone, access the lens style camera network, enter the password, then open the dedicated app (Sony PlayMemories). It is only then you can finally see the live view image on your phone screen and start to take pictures. 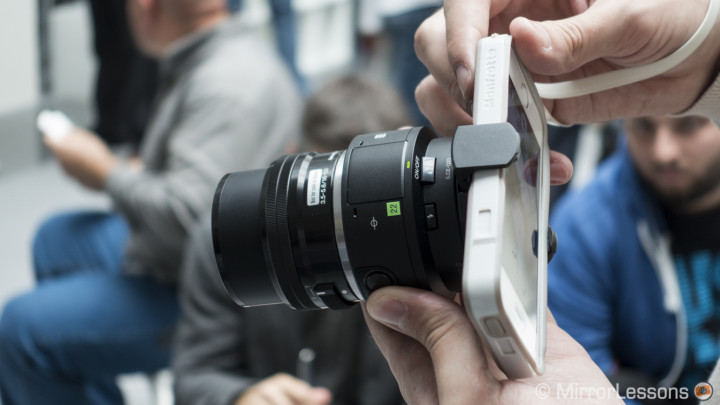 A smaller version of the JPGs (2mp) is automatically transferred to the iPhone photo library. Of course if you use an SD card inside the Lens Style camera, you can access the full-sized JPGs and RAW files later. It is not possibile to transfer RAW files directly to the iOS device but apparently it is possible with Android devices. And if you want to use it right away as a way of sharing something on Facebook, you don’t really need RAW anyway.

As with the other QX models, the QX1 has a built-in mechanism to attach the camera to the body of the smartphone. You can also use it separate from the phone, which is useful for selfies for example. 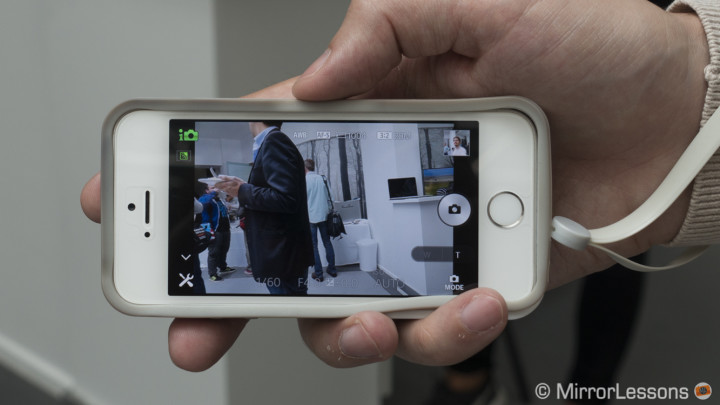 The operations are quite simple. You can take pictures by touching the dedicated virtual button on the screen or using the shutter button on the lens. The autofocus works well and you can change the focus point on your smartphone screen, which is useful and fun to play with. On the iPhone you can also change the most important settings like the shooting mode, aperture, shutter speed, ISO etc. The first lens I tried was the 16-50mm F/3.5-5.6 OSS motorised kit zoom lens. You can control the focal length either with the zoom button on the lens or via your touch screen. Once you take a photo, it only takes a short time to upload it to the smartphone.

In this case talking about image quality is a little bit redundant. Certainly it is an APS-C sensor and a very good one at that, so the performance far outdoes that of any photo capabilities built into a mobile device.

But what I was interested in was to use another lens on the QX1, so I mounted my 55mm f/1.8 FE, which became a portrait lens on the QX1 APS-C sensor. As you can see from the photo below, the combo becomes more prominent. While the QX1 grip remained attached to my iPhone 5s, I felt that the whole combo was too fragile to carry around if I didn’t keep it steady with both hands. 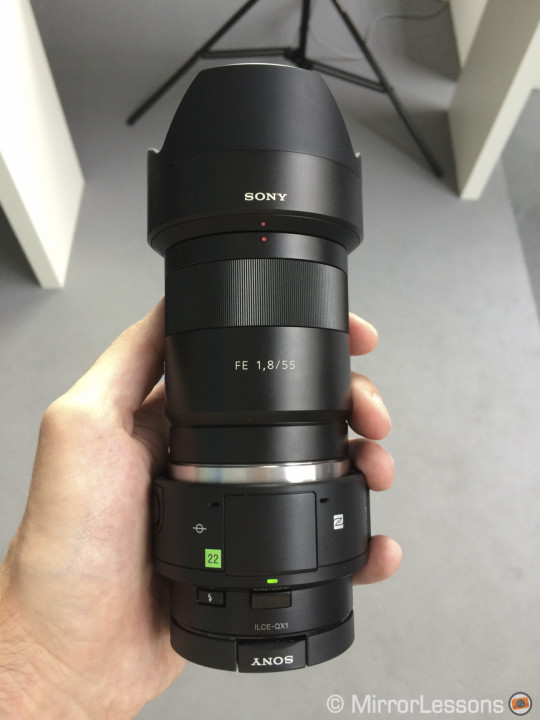 I admit that it was fun to take some shots with the 55mm but I couldn’t see myself swapping lenses on the QX1 on a regular basis, let alone using something bigger than a kit or pancake lens. 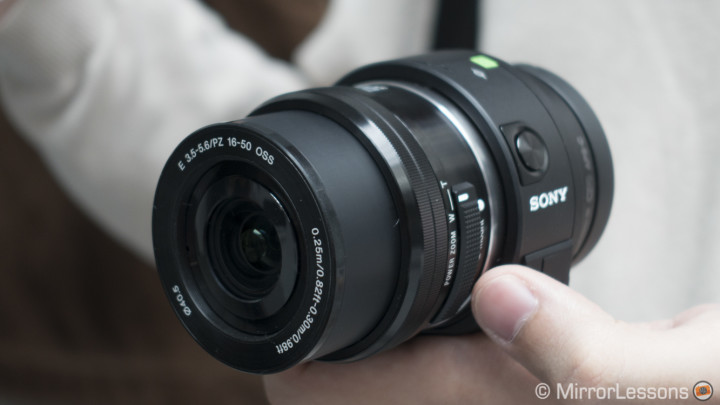 While I think that the QX10, QX30 and even the QX100 are interesting accessories to the smart photography, I find the QX1 concept too drastic to be practical. I respect Sony’s desire to shake the market and put innovative products out there that give users an alternative but at the same time, one of the key things about taking a shot with a smartphone is its simplicity. You don’t care about exposure, shutter speed, ISO or any of the other settings. You just compose and take the shot. Having to mount a lens camera or an interchangeable lens complicates the process and if you want a better tool to take photographs, you may as well just buy a proper camera. Furthermore, most new camera models now include Wifi or NFC to share high quality images when you want to. Experimentation and new technology aside, I really don’t see a reason to own a QX1.