You are here: Home / Interviews / Photographing the stars with the Lumix GX7 – Interview with Andre T. Nygen 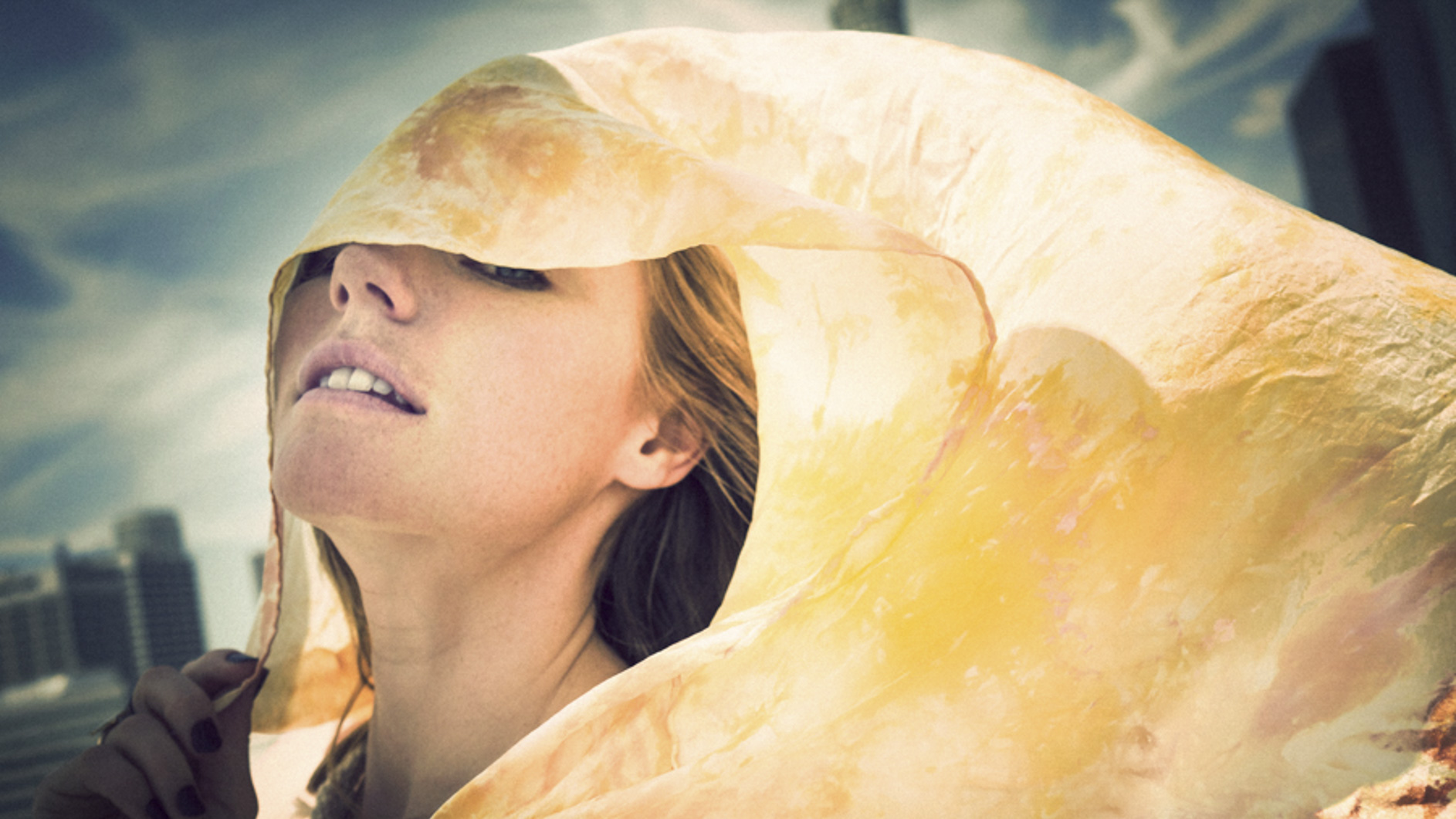 This week’s interview is with Andre T. Nygen, a Montreal native who moved to Los Angeles when he found his calling as a portrait photographer and videographer for up-and-coming actors and actresses.

All the images contained in this article are property of Andre T. Nygen and may not be reproduced in any way.

1. Who is “Andre T. Nygen” in three simple sentences?

I am a beauty portrait photographer from Montreal who now lives in Los Angeles. My main clients are working actors who want dramatic portraits for their books that don’t look like regular headshots. I also shoot acting reels and music videos.

2. You are a portrait photographer who works mainly with actors. How did you end up specialising in this genre? 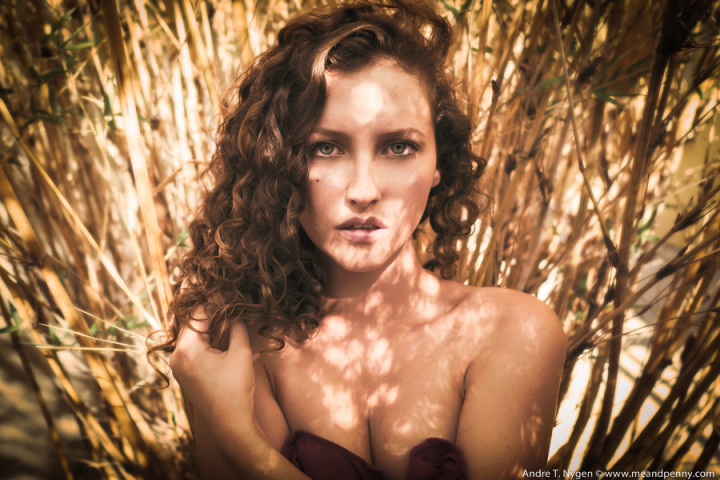 3. In my experience, actors who have no problem performing in front of a video camera can be very shy when it comes to being photographed. Have you had a similar experience? How do you put them at ease and capture the intense expressions we see in your photographs?

I’ve had similar experience also and I think that’s because acting and modeling are two completely different skills. When an actor performs, she is trained to dismiss the camera (and everything else not related to the scene) from her conscious mind. During a photoshoot, to ask actors to strike a pose or to even look directly at the camera is absolutely counterintuitive for them.

What I do is to ask my subjects to put themselves in-character and pretend the camera is a friend, a lover, an enemy etc. I also shoot fast and shoot loose, trying very much to mimic the 24 frames per second of a motion camera albeit not at that rate. Most recently with the newer Panasonic cameras, I’ve been experimenting with using the electronic shutter on silent mode. The results are very encouraging.
As for the intense look, I have a No Smile Allowed policy! I think that works for both parties since most actors dread having to put up a fake smile for the camera and I dread the “headshot” look. 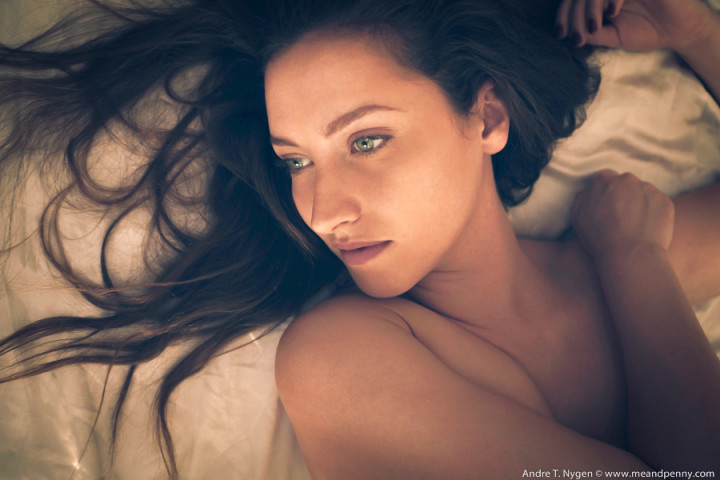 4. Your website is named “meandpenny”, and I believe “Penny” refers to your camera, the Lumix GX7. Can you tell us why you chose it?

My first ever mirrorless (and one of the first of its kind) was the Olympus E-P1 Digital Pen. For the first time, I could achieve DSLR image quality with a tiny camera and that was amazing and liberating. The Pen became my constant companion and it wasn’t long because it was affectionately known as Penny. The moniker stuck ever since and all subsequence upgrades inherited it regardless of brand. I thought it was a cute thing to do.

5. You use the GX7 for stills but also for video. Can you tell us more about your work as a videographer?

I am in the process of incorporating more video into my work. Along with my still portraiture, I also offer to do reels for my actor clients. When the 5Dmk2 came out, people where prophesying the death of still photography. While that clearly didn’t happen, I still think there is a great market out there for photographers to dig into, especially here in Los Angeles.

6. What are your go-to lenses (including third-party lenses) and why? Do you use the same lenses for both stills and video.

In the old days of film photography, you would often find photographers with the traditional three-lens kit: a wide angle (28mm), a normal (50mm), and a telephoto (100mm). The two-lens kit was also common and consisted of a slightly wide 35mm normal and a short 85mm portrait lens and that’s the kit I prefer.

My own kit it consist of the Olympus 45mm 1.8, my dedicated portrait lens and the recently released Panasonic Leica 15mm 1.7 which I use for more environmental portraiture. On the Micro Four Thirds sensor, they become 90mm and 30mm respectively. They are both outstanding lenses with great sharpness and character, especially the 15mm which is quite unique in how it captures colours (slightly subdued and dreamy yet not flat nor muddy). I bought it to replace the somewhat disappointing Olympus 17mm 1.8. With the kit, I am pretty much covered no matter what I want to do. For my videos, I use the 15mm for wide and establishing shots and the 45mm for close-up shots. 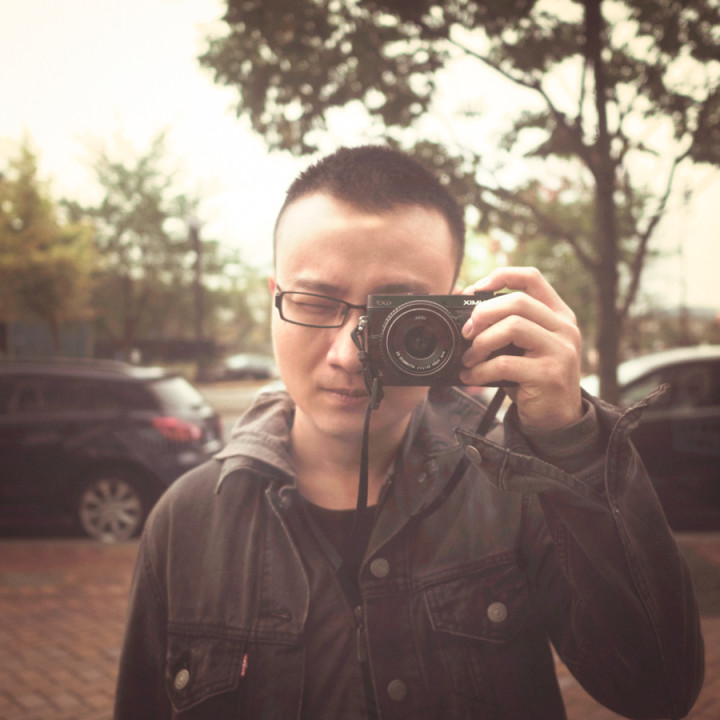 7. What are three must-have accessories for your GX7 that you would recommend to our readers?

Just one and that’s a good multi-tool with a decent pair of pliers and a sturdy blade. There are so many uses for one whether you’re on a movie set trying to unstuck a tripod screw or deep in the wood and you need to build a shelter or fight off mountain lions etc. The one I use is the very sleek Leatherman Skeletool. I’m from the old MacGyver school of thoughts: always be prepared and always have a pocket knife and some duct (or gaffer) tape handy.

8. After many months of experience, is there anything you would change about the GX7? Are you interested in the GH4 or the new LX100?

In terms of usability and ergonomics, the GX7 is to me, the perfect camera. I do wish it had a mic input and a better video format than AVCHD which is a very awkward to edit and backup. I will definitely have to buy the GH4 in the near future. Not as a replacement to the GX7 but more as a dedicated 4K video workhorse. Its DSLR-shaped body is a major turn-off for me and it’s not a camera I would like to carry around. As for the LX100, it does looks very promising but losing the ability to switch lenses may be an issue.

9. Browsing your pictures on your website, it is clear that you like natural locations and working with natural light. Do you also use additional lights or reflectors? Is there a particular shoot that you found challenging with the GX7?

I do carry a small Olympus FL-36RC (discontinued) which I sometime use as a hairlight or a backlight. It’s extremely lightweight and only requires two AA batteries but it’s still a full-size flash and its greatest feature is that it can be triggered wirelessly with an Olympus or Panasonic camera. As for reflectors, I do use them whenever I have someone to hold them for me, mostly to add catchlight in my subjects’ eyes and to open up the shadows during backlit situations. Ironically, backlit situations are when the GX7 (and most cameras) struggle the most and in such case it is often best to switch the camera to full manual exposure, manual focus and use spot metering. 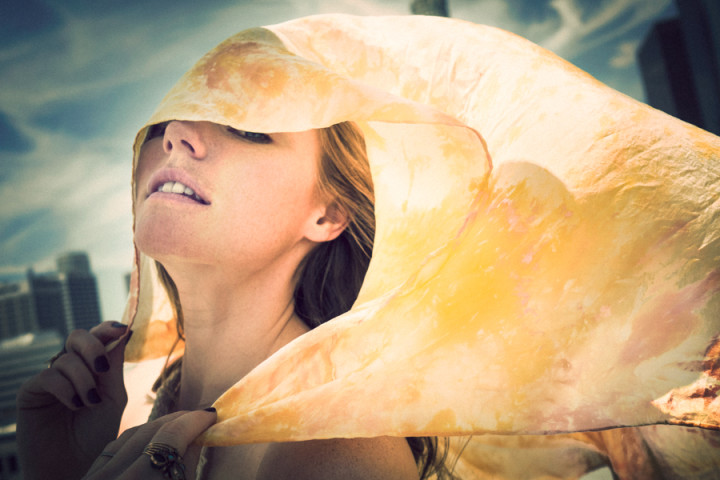 10. You seem to dedicate a lot of time to post-processing as well. Your portraits have a precise style with a particular composition and colour palette. How did you define your style?

I’m not really sure to be honest. I learned photography from shooting on film so my style and colour palette may be a bit old school. I love warm and earthy tones and I am very much attracted to words like dreamy and ethereal. I also take inspirations from the cinemas and rarely shoot my portraits in the “portrait” orientation. 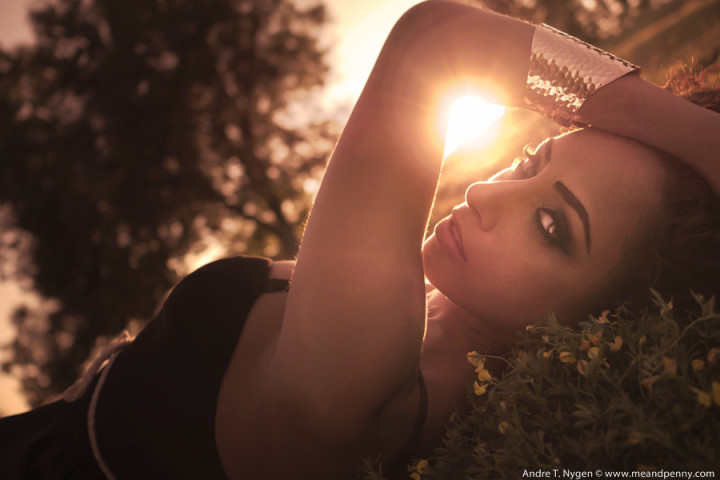 11. In one of your Instagram posts, I saw that you also own an Olympus 35RC, which is a very small rangefinder film camera. Do you often shoot film?

Unfortunately, shooting with colour film has become prohibitively expensive nowaday in the United States. While nothing compares to the look of film or the romantism of shooting on film, it’s just not something I can afford to do often. I do occasionally shoot B&W film on my beloved Nikon FM2, I then process the rolls in my bathroom. B&W is much cheaper but it isn’t really my thing. Other than that, I still enjoy collecting film cameras and often prowl the local thrift shops for them. Old mechanical cameras are the best in terms of ergonomic which is also why I love the most recent Olympus and Panasonic cameras so much with their retro look. (except the GH4)

12. Whether it be for stills, video or film, you really seem to enjoy using the smallest amount of gear possible. How can working with less gear be of benefit to a photographer/filmmaker?

Having less gear keeps me from the dreaded “paralysis through analysis” phenomenon when faced with too many options. Having less gear forces me to be more creative with what I have. It also makes it easier for me to familiarize myself with my equipments and to really know them in all their idiosyncrasies. When your camera becomes an extension of your mind’s eyes, things feels much more natural and effortless and that’s when creativity happens. But honestly, I really hate schleping things around and I would definitely hate for photography to turn into a workout session. 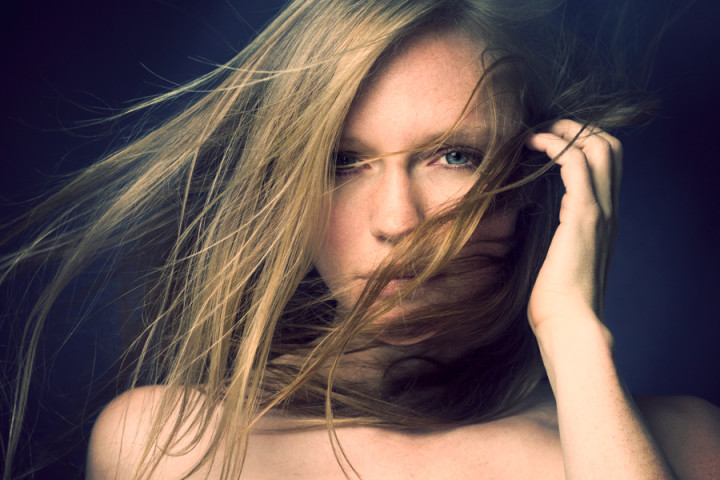 13. There are many interesting compact mirrorless systems out there at the moment. If you hadn’t chosen to go down the Panasonic route, would you have chosen another mirrorless system? Which one and why?

The full-frame Sony A7 series cameras are very alluring with their great image quality and noise performance. Having owned a NEX-6 in the past, I know Sony can make outstanding cameras. They just don’t make many good lenses, and the ones that are good (Zeiss) are huge and expensive. Currently, Olympus and Panasonic have the best selection of superb optics so I don’t see myself going anywhere else anytime soon.

14. Do you think mirrorless cameras will eventually replace the DSLR as the professional’s primary work system?

As a photographer who accepts money for his work, my main requirement for my tool is durability and usability. I need my camera to have a strong body capable of surviving the occasional bumps in the field and a good amount of external controls so I won’t waste time digging into the menu. Mirrorless cameras in the past didn’t meet those criteria but not so anymore. All of the flagship bodies from all major mirrorless camera makers (Fuji XT-1, Sony A7, Olympus E-M1, Panasonic GH4) have great ergonomics and are built to last. The coming years will be very exciting for gear enthusiasts! 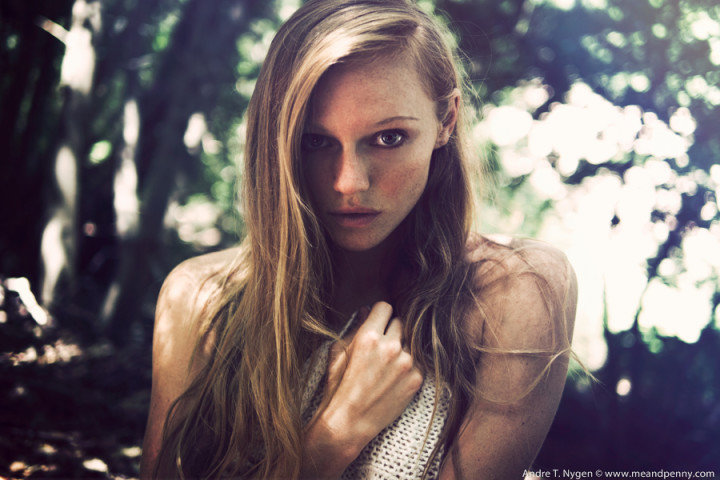 If you have any questions or comments for Andre, be sure to make yourself heard in the comments section below!