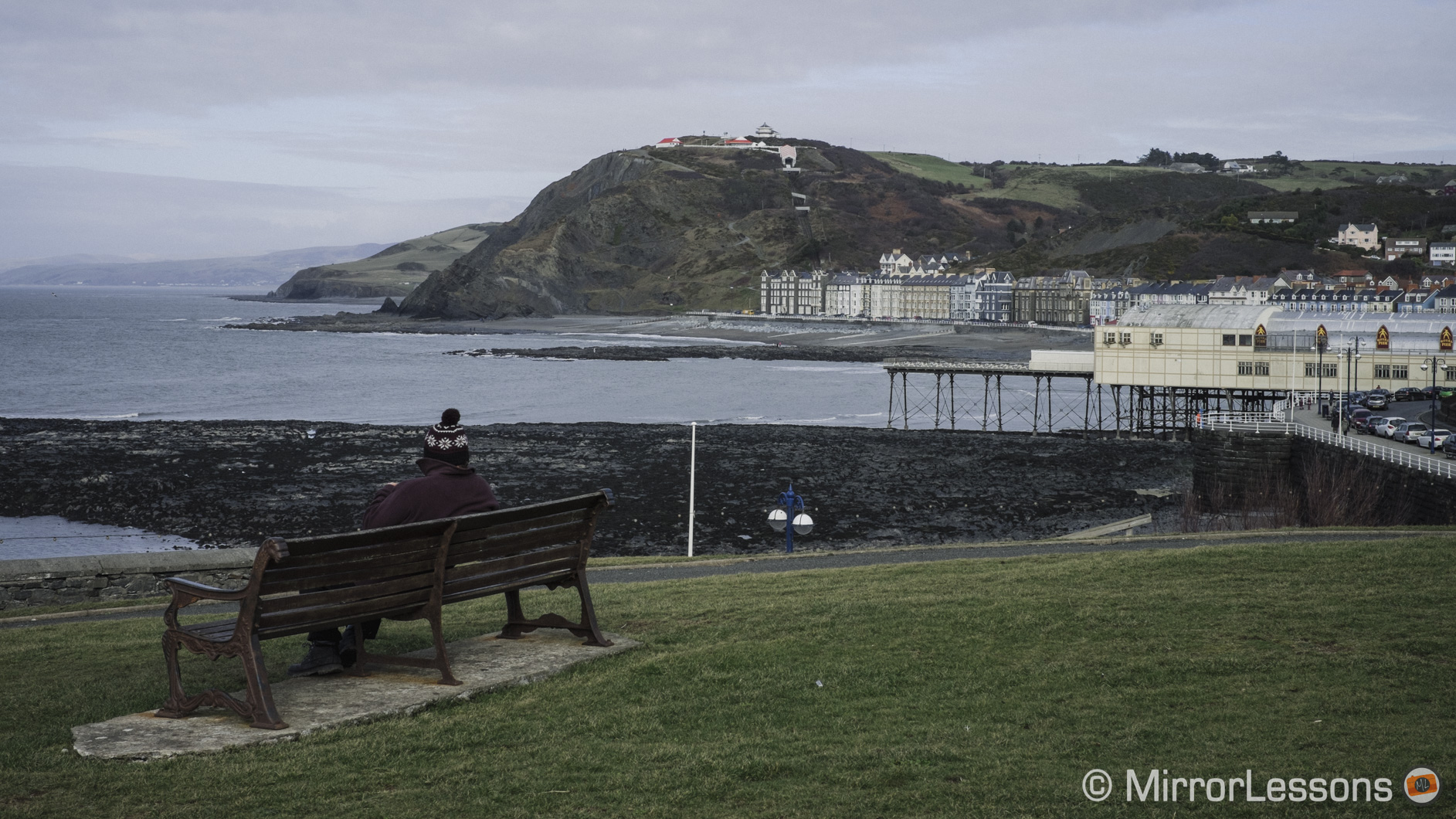 The Fujifilm XF 35mm f/1.4 first came into our possession a year ago when we saw it sitting in our local camera shop’s window at half price. Although it is one of the oldest XF lenses – it was released in 2011 alongside the X-Pro1 – its specifications aren’t to be underestimated. Besides having a compact and lightweight design, it also has a fast 1.4 aperture and a focal length that most photographers, regardless of their specialisation, want in their collection.

Unfortunately, with the constant influx of new cameras and lenses to test, it is also the XF lens I’ve given the least attention. I wanted to change that now that we’ve officially moved in Wales and have more time to dedicate to testing older gear as well.

As such, I chose the 35mm as my sole companion for our back-to-back trips to Welsh coastal towns Aberystwyth and Aberdyfi.

Aberystwyth is one of the largest towns in Wales, which is a grand statement given its rather small population of 13,000. Like other seaside resorts in Wales, it has retained much of its Georgian and Victorian character in the form of pastel townhouses of various colours that line the costal walkway. A prominent feature is Constitution Hill whose summit can be accessed either by foot or via the Aberystwyth funicular. It was in this picturesque spot that we spent most of our day.

I’ll admit that the 35mm focal length (53mm equivalent) wouldn’t have been my first choice for a panoramic location like this but it also forced me to think outside of the box. I found myself having to choose and compose the elements in my photograph quite carefully to take an interesting shot, sometimes by physically changing my position or extending my arms out, up or downward. The exercise reminded me of the day I spent shooting landscapes with the M.Zuiko 45mm f/1.8 (a portrait lens) a year and a half ago.

Now to regurgitate what every review of a mirrorless system out there has already stated: I sincerely enjoyed the compact and lightweight aspect of the 35mm f/1.4, especially during the steep walk up the hill.

The lens weighs a total of only 187 grams but boasts an all-metal build, from barrel to lens hood. It features a very nice aperture ring with clear physical markings and clicks. Perhaps my only complaint about the aperture ring is that the detent resistance isn’t the best. If you aren’t careful, the ring will inadvertently turn, changing the aperture value.

The focus ring does not have a focus scale on the lens, so to see the scale, you have to look through the EVF or at the LCD. It is very smooth and pleasant to use.

The lens hood, whose square construction makes it quite difficult to remove and attach the lens cap, is the only aspect of the lens I feel is poorly designed. It would have been better if Fujifilm had decided to give the lens a traditional lens hood, or even better, a reverse hood that slides over the barrel when not in use.

There is no question that the optical quality of the 35mm f/1.4 is excellent. I used it for landscapes, seascapes and close-ups throughout the walk and was constantly impressed by the excellent sharpness throughout the aperture range, contrast and colour rendition. Even at 1.4, the results were spot on.

Though it didn’t matter for our nature walk, the 35mm f/1.4 is quite a “chatty” lens. Compared to more recent XF glass, the lens elements make a lot of noise when focussing, which could prove an issue in situations where absolute silence is required. It is quite fast on the X-T1 however and only struggles to lock onto subjects when there is little contrast in the scene.

Since the spring flowers were just beginning to bloom, I also experimented with some close shooting the following day in Aberdyfi, a smaller seaside town an hour away from Aberystwyth. It turns out that you cannot get very close with the 35mm–about 15-20cm in distance away from your subject. That said, the out-of-focus rendering is quite beautiful considering the focal length.

A word about post-processing: I’ve noticed that Lightroom will automatically add some vignetting to Raw files taken with the 35mm (particularly at f/1.4) so it is a good idea to apply vignetting corrections. Simply head to the Lens Corrections menu, select Enable Profile Corrections and scroll down to Fujifilm to resolve the issue.

In 2015, we should be seeing the arrival of the second iteration of this lens, dubbed the XF 35mm f/2 R WR ASPH.

While we currently know very little information about this lens, the name suggests that it will be weather-resistant. It also seems that its slightly slower aperture will be compensated by a more compact build. There is little doubt that this new lens will improve upon all the defects of its predecessor, and we can’t wait to get our hands on it!

The photos you see here were taken with the Fujifilm X-T1 and XF 35mm f/1.4 and post-processed in Lightroom using the Rebecca Lily Pro Set III.