You are here: Home / In Depth / TPS 2015: An interview with Fujifilm Japan’s Kunio Aoyama and Hiroto Nakata 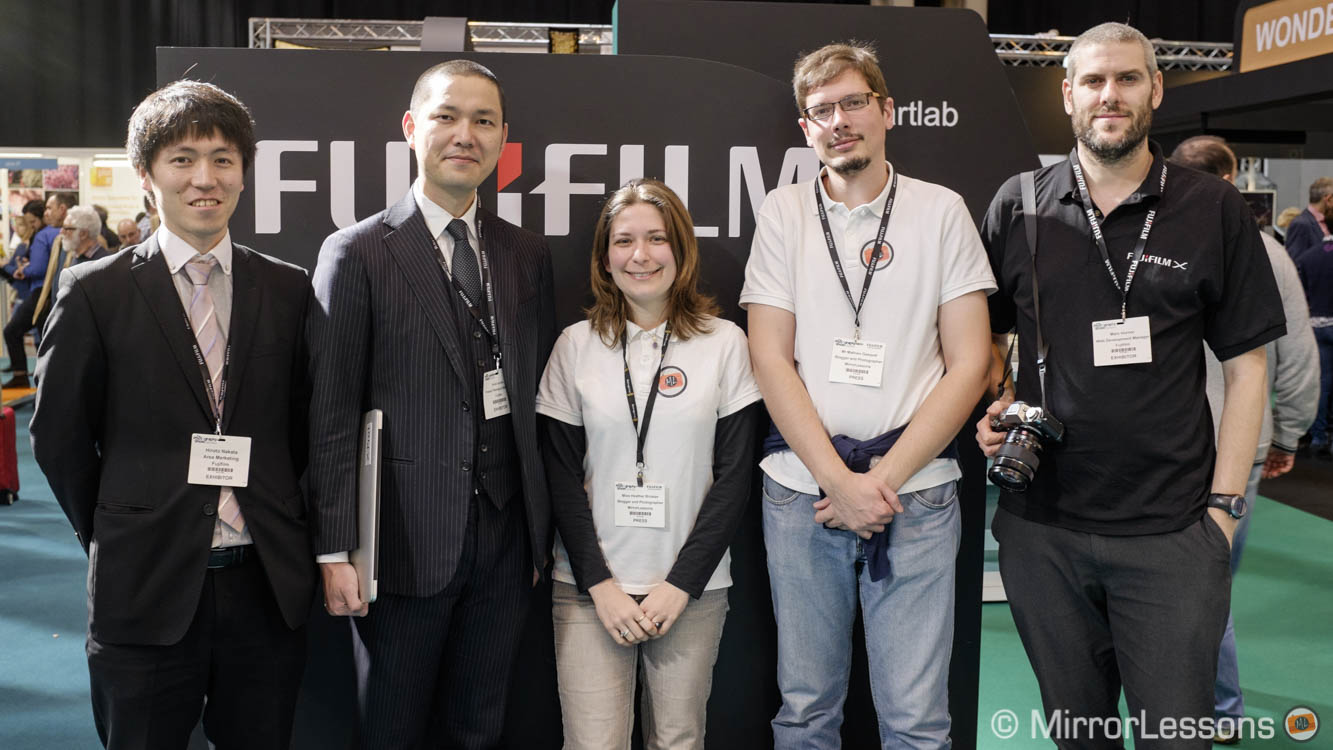 The morning after the Fujifilm photo walk we attended on the first day of the UK Photography Show (read about it here), we sat down with Kunio Aoyama and Hiroto Nakata of Fujifilm Japan (Sales & Marketing Div., Optical Device & Electronic Imaging Products div.) for an interview. Marc Horner from Fujifilm UK (Web Development Manager, Electronic Imaging) was also present and together we discussed several topics including organic sensors, the lens roadmap and professional support.

Kunio Aoyama: Yes, it is a very important thing for us and we think we should remember the past 4 years. In 2011 we announced the X100 which officially started the X series. From this camera we studied many things and received much feedback from several customers. We have to study how to improve features and performance as well as which kind of lenses to develop. The result of four years of study is the X-T1.

K.A.: Actually our Senior Sales Manager Toshi Iida already said that we have the plan to develop a higher megapixel sensor but we still cannot say when we will announce it. In addition, we want to say that the number of megapixels itself is not so important to us because the genuine resolution is a combination of the lens, sensor and processor. Fortunately, we’ve already designed lenses capable of sustaining a high resolution sensor. The current XF lenses have enough potential to adapt to a higher resolution. So now we are studying higher megapixel sensors. I hope that we can introduce it soon.

K.A.: Yes, we are continuing to develop the sensor.

Hiroto Nakata: The organic sensor itself is designed not only for cameras but also for other applications. So originally the technology and development is not for digital cameras.

K.A.: We are trying to figure out if the sensor is best for cameras, video or other hardware products. We are still studying and developing the package.

K.A.: We think that the 4K photo from Panasonic makes sense for certain usages such as the shooting and capturing of a moment. We think it can suit one type of photography but not all kinds of photography. With 4K photo we cannot use long shutter speeds or flash sync shooting. These are just a few examples but it is enough to understand that it is not “all-mighty”. We think it is an improvement but maybe it cannot be the future of photography.

K.A.: We are so happy because I am the product planner for the XF lenses. The 16mm and 90mm are my “babies”. We are working so hard to launch these roadmaps. On one hand we are developing lens roadmaps, but on the other hand we are trying to understand where the lack of coverage is. For example, tilt-shift lenses or fisheye lenses or extreme telephoto lenses. In our opinion, the lens itself is not everything. It is only half of the equation because the combination of lenses and cameras is a camera system. So we should develop lenses and camera systems with enough potential. Maybe when we announce the next generation of cameras, we can announce the next roadmap.

H.N.: We are extending the range of our lenses. For example, a very long telephoto zoom lens is coming, the 140-400mm. Currently our lenses are good for portraits but this lens will allow us to reach new genres like wildlife. We are very open to listening to the voices of our customers. Being at the show is also an opportunity for us to meet customers and photographers.

K.A.: So many! (laughs) I can give some examples: we’ve received good feedback about the lens quality like the sharpness and the beauty of the bokeh. This feedback is very encouraging. At the beginning of the X series, we tried to produce something that was like no other by Canon, Nikon or Sony cameras, something unique. It was our concept to make X series cameras. The good feedback from the X users is that this is a camera they were truly waiting for – just small, compact and not loud. At the same time, we’ve received bad feedback: some of the feedback compares our cameras to DSLR systems. “Why is this camera so slow? Why can’t it be used for continuous shooting?” It is negative feedback but also good feedback for us because it is a hint for us to improve our cameras. We are studying and developing the autofocus functions. Bad feedback is good for me as a product planner because it is a good example of what to do. We asked our technicians why we can’t have a faster autofocus and they’ve said they can improve it.

K.A.: We think that the sensor size itself is not the only important part. The ideal solution is having the best sized sensor for the best sized body. For a camera like the X30 or the X20, the best sensor size is 2/3”. It is the best compromise. Thanks to the 2/3” sensor we can use a brighter lens with a 4x zoom. We can also install a 1cm macro function, and a longer battery life. That is the reason we choose the 2/3” sensor.

H.N.: If somebody requests a bigger sensor, we can propose the X100 series. It is also compact but the sensor size is APS-C.

H.N.: The X30 has a better viewfinder and also the same battery as the X100T. The fast autofocus with phase detection is also a special point.

K.A.: Actually we have already started professional support in several areas. We have plans to expand the coverage.

Marc Horner: We’ve been doing it in the UK to a certain degree where we try to give things like faster turnaround or repairs and faster response to emails or telephone calls. We’ve been doing that quite successfully in the UK for a few years now. We’re working on a way of rolling out the same sort of thing onto other European countries as well, and also giving them some sort of global guidelines. At the moment we obviously have a global warranty but each country still treats service slightly differently. With the help of the Japanese team, the aim is to roll out a standard level of service that all countries should be able to expect within the next year. It’s ongoing.

K.A.: We cannot say when or what. But fortunately, for years we’ve been able to excite our users, so this year there will also be something that will excite photo enthusiasts very much.