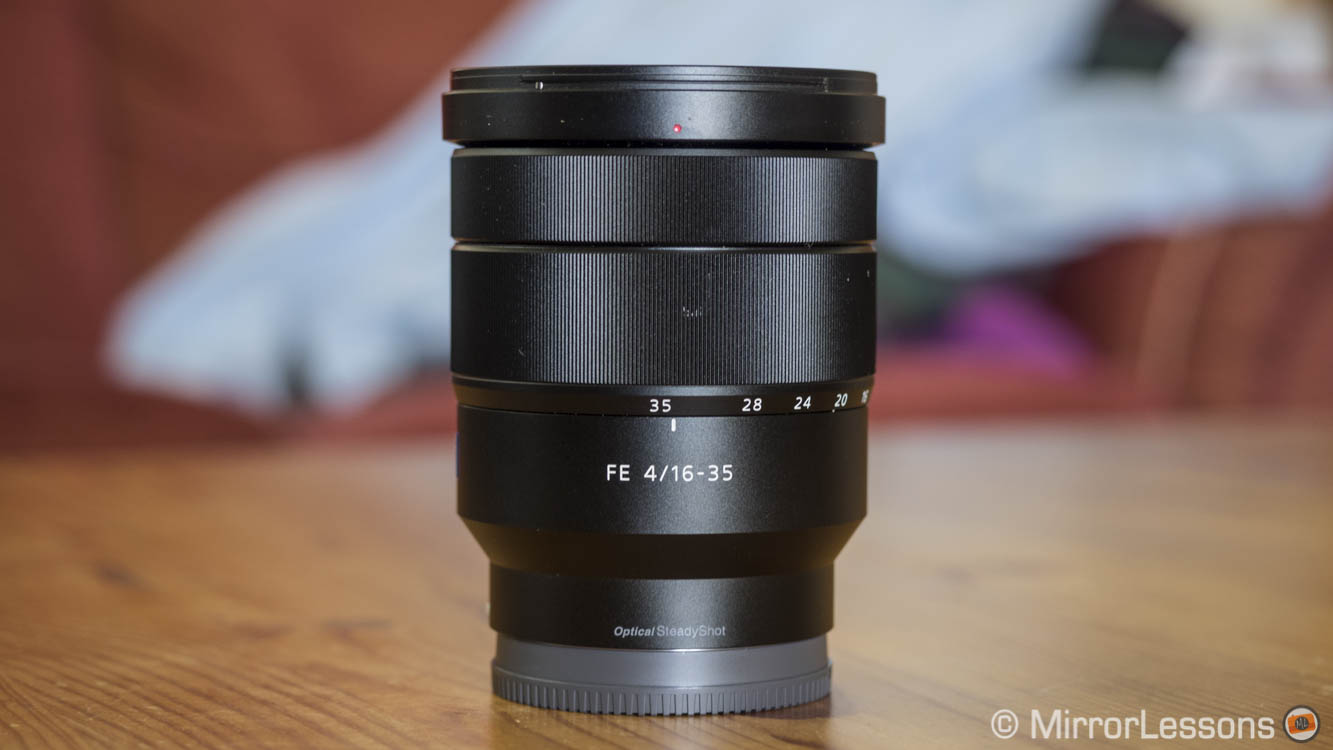 In the first six months following the release of the Sony A7 and A7r, many users were complaining about the lack of native lenses for the system. One year and three months later, I must praise Sony for the effort it has put into releasing more lenses for the system. At the present day, there are ten full-frame E-mount lenses excluding the two Zeiss Loxia manual focus lenses. To me, that is not bad at all for a system that is less than two years old.

Out of the entire zoom range, the 16-35mm f/4 was the one I was most curious to test. I really like wide-angle lenses and the 16-35mm offers a very interesting range from the very wide 16mm to the reportage 35mm. It is the third zoom lens that has a constant f/4 aperture like the 24-70mm and the 70-200mm and the second zoom lens for the system designed by Zeiss. The 24-70mm received very mixed reviews and was disappointing for many. The general opinion about the 16-35mm however seems more positive.

Is it a must-have lens for the Sony FE system? Let’s find out!

Build quality and ease of use

The 16-35mm shares the same build quality as the 24-70mm. It has an all-metal black surface, feels solid in hand and is dust and moisture resistant. The lens is not light (518g) but I found it well-balanced when used with the A7 mark II. The combo is nice to carrying around and isn’t too heavy. The f/4 aperture choice is certainly meant to keep the size and weight of this lens reasonable. The lens hood is made of plastic with a metal ring finish on the outside. Both rings (zoom and focus) are nice to use and very precise with the proper resistance. The body doesn’t have an inner zoom mechanism but it doesn’t extend too much when used at the shortest focal lengths. There aren’t any buttons or switches on the lens itself.

Inside, the lens has 12 elements in 10 groups with 4 aspherical elements, one advanced aspherical element and 3 ED elements. The lens has Zeiss T* coating to minimise flare and includes optical stabilisation. It is compatible with all E-mount cameras which also includes Sony APS-C cameras. On a crop sensor the zoom range becomes 24-52.5mm.

I would buy this lens for two reasons and the first is landscape photography. The lens offers a very interesting focal length range for this genre. I put it through its paces during our walks through the Welsh hills to get a first impression about sharpness and distortion, and to test colour rendition, micro contrast and flare resistance.

The first reason to buy this lens is to take advantage of those 16mm. This kind of wide angle gives you lots of flexibility when searching for interesting compositions, and also gives you a nice three dimensional feel. The Vario-Tessar doesn’t fail here – the quality of the lens is really high. At the centre, the images are very sharp while at the corners you lose some detail due to distortion. In my eye, being at 16mm there is nothing out of the ordinary here.

Distortion is of course more difficult to notice in landscape shots. You can see it however if you take vertically oriented shots and include the horizon in the background. The distortion is not severe and can easily be corrected with the dedicated lens profile in Lightroom. The Adobe software is actually more effective than the camera software. Use the slider in the examples below to see the difference. 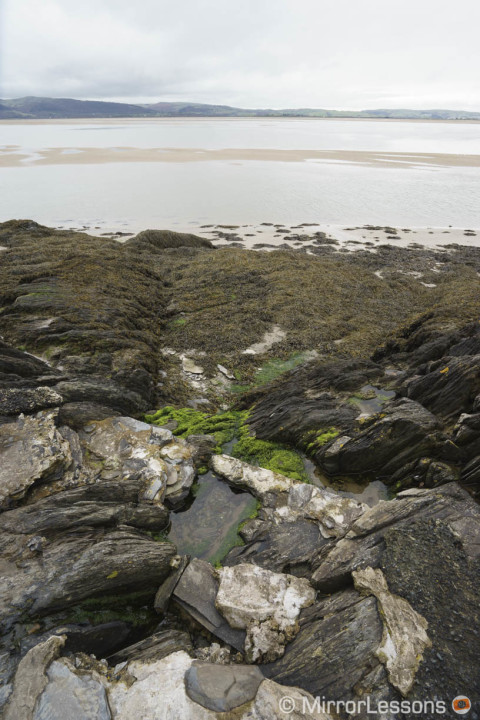 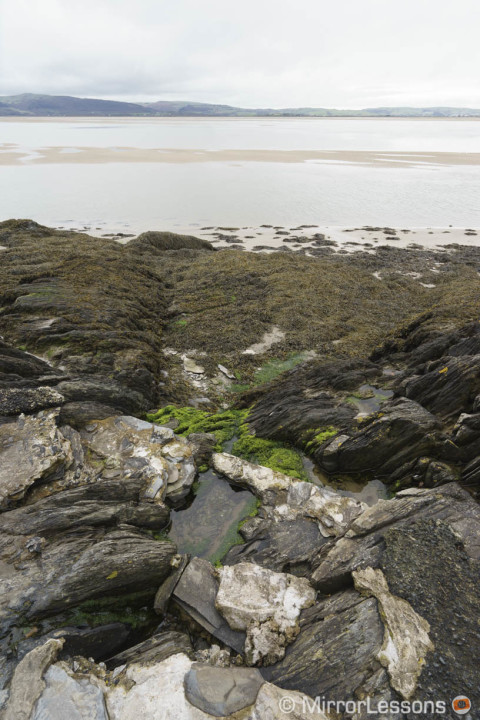 Vignetting is absent and I only found very small traces of chromatic aberration. The flare resistance is perhaps the most stunning aspect about the 16-35mm, and is very important for landscape photographers as they most likely take pictures at sunset, sunrise and in backlit situations. The truth is that I rarely came across any traces of flare at all. The only relevant example I have are the two below. You will notice a slight purple halo on the right side of the photograph in the first example, and on the left in the second.

For landscapes, the lens performs well throughout the entire focal zoom range and proves itself very versatile. I didn’t find anything relevant to complain about. Resolution and contrast are excellent and the colours are neutral with good contrast as you would expect from a modern digital zoom lens. You will notice some diffraction at the slowest apertures like f/22, but this is only to be expected on digital AF lenses.

Another great usage for such a lens is architectural photography, both indoors and out. Outside, the lens can help emphasise the lines of a building or a monument. Indoors, it can help when you take pictures of small places. This second genre also helped me to better analyse the sharpness and distortion.

The first series of pictures I took was for a local shop in Aberdyfi near where I live. It is a new fair trade shop that just recently opened. Heather and I took a couple of pictures to help the owner to promote the shop during the Easter break. The shop is composed of only one room and there isn’t a lot of space. This is where the 16mm proved very helpful in visually describing the location. Here distortion is more noticeable but again it is normal for the 16mm focal length. Also the lack of sharpness at the borders of the image can be easier to notice. Overall I found the result just fine. It is not perfect but it is more than acceptable.

I also took some other shots at 20mm, 28mm and 35mm. At the longest focal length, distortion is surprisingly more present. Other reviews have already pointed out that the lens gives its worst performance at 35mm and I can confirm that. There is some distortion I wouldn’t have expected at first. That said, with Lightroom and the lens profile it can be minimised. Below you can see the difference between two shots taken at 28mm and 35mm. 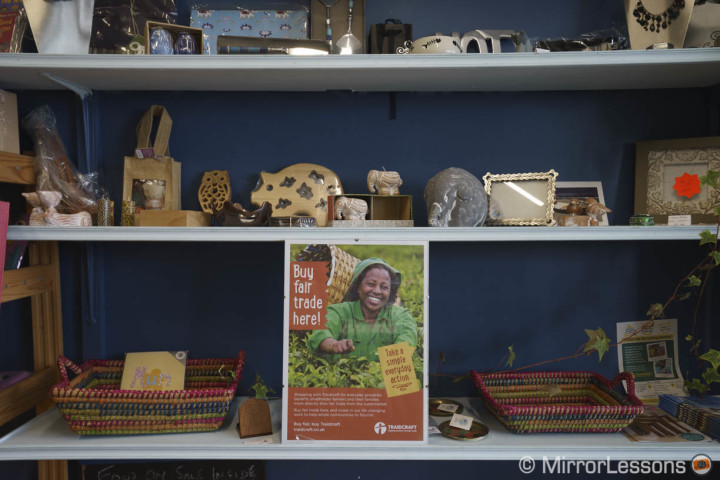 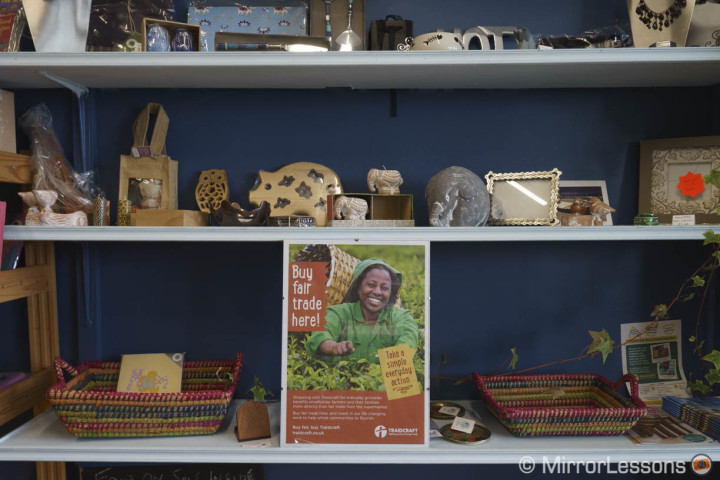 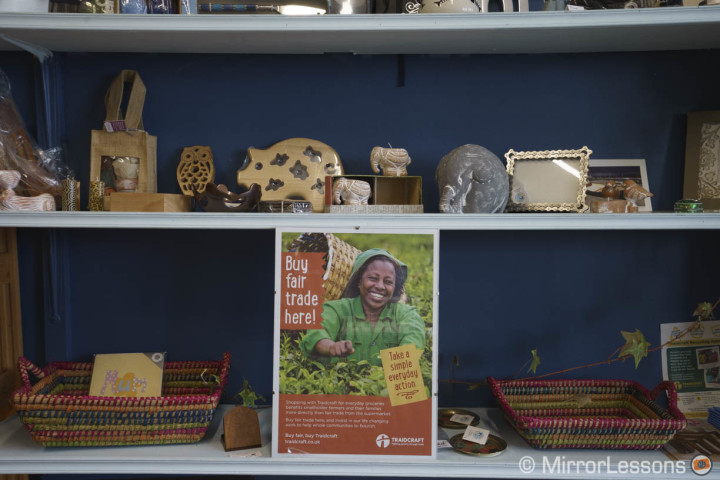 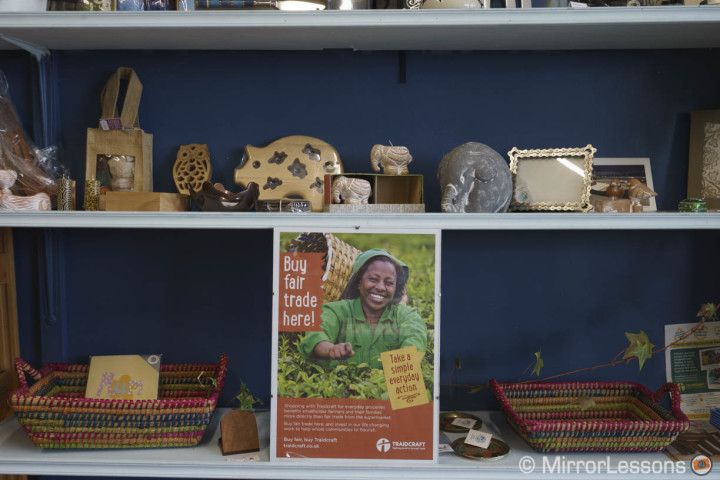 Then I took various pictures in different towns and I can confirm that the lens is a good performer when it comes to architecture. The best overall performance I found is at 24mm in terms of sharpness and distortion but I wouldn’t hesitate to use it at the shortest focal lengths as well.

Another point that surprised me were its close focusing capabilities, with the minimum being 28cm throughout the entire zoom range. At f/4, the lens is sharp enough and is capable of a beautiful bokeh rendering. Of course this result is limited to short focusing distances but it is an extra welcome feature that I wasn’t initially expecting.

The lens includes optical steady shot and is actually quite good. With the A7s, I managed to take a shot at half a second hand-held at 24mm. With the A7 mark II, the optical stabilisation is used in conjunction with the sensor stabilisation of the camera.

The lens has a quick and silent autofocus motor and I never encountered any particular problem with it. The lens is also interesting for video use. The focusing ring is nice and precise to use when manually focusing. The video below was shot with the A7 mark II and the 16-35mm (with the exception of the train sequence where I used the Summicron 35mm).

My overall conclusion about this lens is very positive. It delivers good performance in terms of sharpness and distortion and is almost free of artefacts such as vignetting and chromatic aberration. Its resistance to flare is quite impressive. This should be enough to consider this lens for landscape photography. For architecture, it can work well but you might notice some more distortion or lack in sharpness at the corners. The 16-35mm is not perfect, with its major weak point being the 35mm focal length. I would say that it is fine up to 24mm. The corners can sometimes lack some sharpness depending on the focal length used and your distance from the subject but I haven’t see anything really awful.

Is it a must-have for your Sony camera?

As of now, it is the only lens that will give you this range of focal lengths, so the answer should be quite obvious. Personally, I think it is a very good lens. I am not bothered by the maximum f/4 aperture but it can be a little limiting in low light if you want to use it during events or weddings for example (unless you have an A7s). But a 2.8 constant aperture zoom would have resulted in a much bigger and heavier lens.

I mainly used the lens between 16mm and 21mm, and then at 35mm which leads me to think that two prime lenses (18mm and 35mm for example) could be a good alternative if I want to place image quality first. With zoom lenses there are always some compromises to consider but I’ll admit that the versatility of the 16-35mm f/4 was really helpful during my landscape walks.