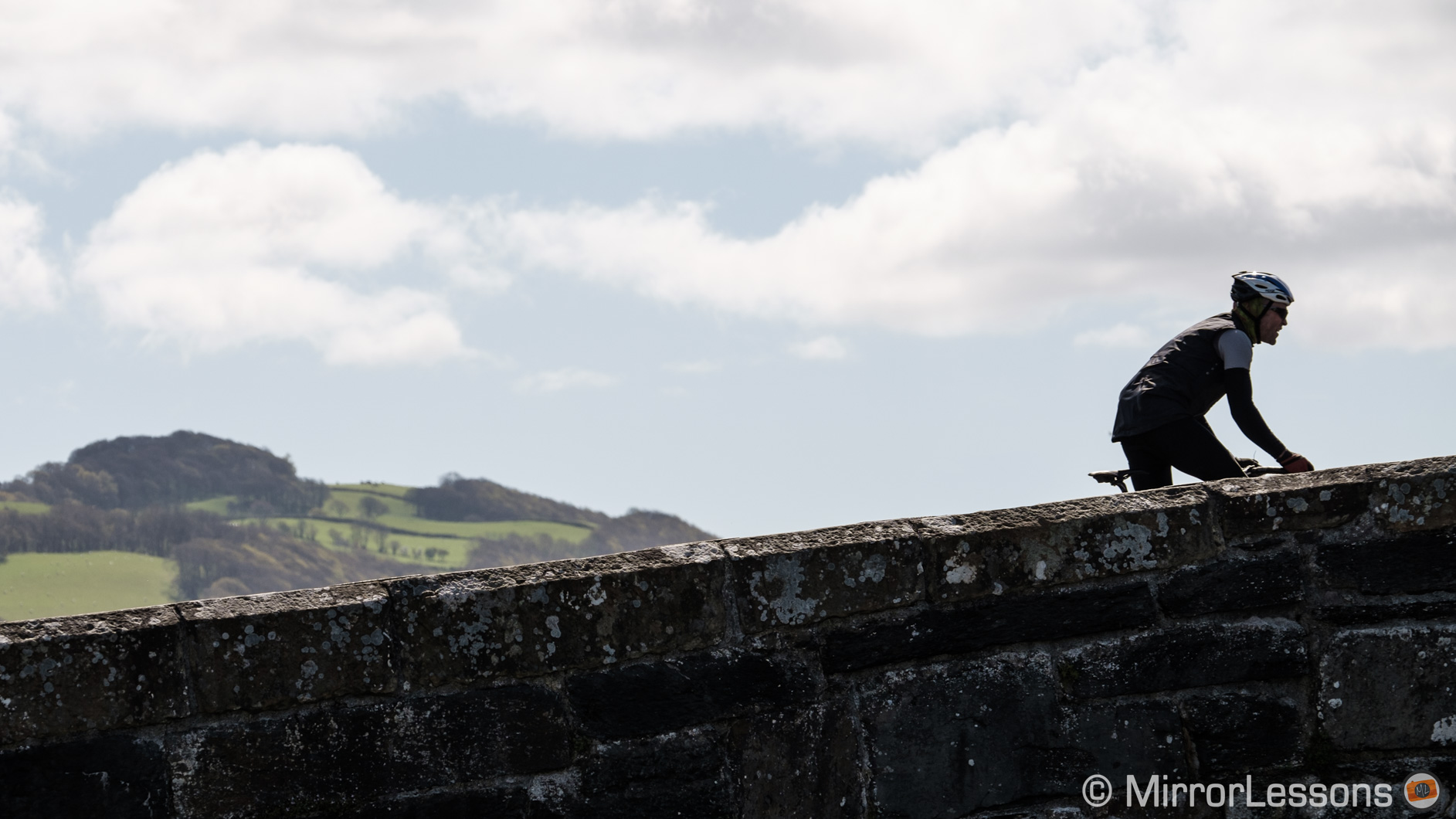 A few days ago, we received a number of Fujifilm products for testing including the two pro zoom lenses. Luckily for us, on Sunday there was the perfect event to put them through their paces: a bicycle race divided into three different paths with the longest one being 104 miles. The Gran Fondo Conwy is a non-competitive cycling race that takes place in North Wales. It starts and finishes at the promenade near Conwy Castle. The cyclists travel through some of the most stunning scenery in the Conwy and Denbighshire counties.

Since it was our first time in the area, we followed the advice of the online guide and made our first stop at the Llyn Brenig (Lake Brenig) in the early morning. Only the riders participating in the longest of the three races (called Mawr) would pass through here.

The first group of cyclists were supposed to arrive at around 9:30 but they turned up 20 minutes later. Perched at the side of the main road, I started to capture them with the XF 50-140mm lens first. I used its fastest aperture of 2.8 to isolate the subject as much as possible from the background. Then I also tried different angles and heights to create some interesting compositions with both foreground and background elements. The 50-140mm has a very fast and silent autofocus system and it is very pleasant to use. Combined with the Fujifilm X-T1, the results are good in AF-C. There are occasional errors where the AF doesn’t lock onto the subject right away or stops following it at certain point. I also found the occasional slightly out-of-focus image in the various series of bursts I took when reviewing them on my computer. But overall the performance is really good. The sun wasn’t in a favourable position and because of the trees lining the road there were lots of shadows on the route. I shot a mix of Raw + JPG and just JPG so that I could play with the Raw files for the pictures that had a dark subject and bright background.

One of the nicest things about photographing this race was that you could tell from the participants’ smiles that they were mainly racing for pleasure and to enjoy the scenery. Some of them were pleased to see us taking pictures and waved at the camera. Heather got one of the nicest shots with the X-A2 and its kit lens below. We both used the Classic Chrome profile for our shots.

I then changed my lens and used the 16-55mm f/2.8 to do some panning and wide shots to show the scenery with the lake in the background. The riders stopped at the lake to get some refreshments before continuing on their journey.

Our second stop was at a very iconic location in North Wales: the stone bridge in Llanrwst. It was a nice change from the first set of pictures. The “pointy” shape of the bridge allowed me to take interesting pictures with the telephoto lens once again. Heather took some wide shots on the bridge with the Fujifilm X-A2 and its kit lens.

I also used the XF 16-55mm to take the classic picture of the bridge and the ivy-clad Tu Hwnt i’r Bont tearoom (on the right). I waited for one cyclist to ride over the bridge so that the image would remain connected to the theme of cycling.

Our third and last stop was in Conwy where the race starts and finishes. The town is on the north cost and its main characteristic is its gorgeous medieval castle in the middle. I noticed that the last turn the riders had to take before reaching the finish line was right in front of the castle so I used the XF 16-55mm to take some low-angle shots at 16mm. I also tried some panning, once again to give more dynamism to the images. It’s at moments like this that you thank the camera for having a tilting LCD screen.

Then I walked near the finish line to get some pictures of some of the athletes arriving and the events backstage. Some of the cyclists had massages to relax their muscles after so much effort.

Before heading back, Heather and I made the most of the gorgeous day by visiting the town and walking along its medieval wall which offers a nice view of the house and castle.

Do you shoot any sports with your mirrorless camera? If so, tell us about your experience below!