You are here: Home / Camera Reviews / The Black Beauty – Hands-On with the Leica M Monochrom Typ 246 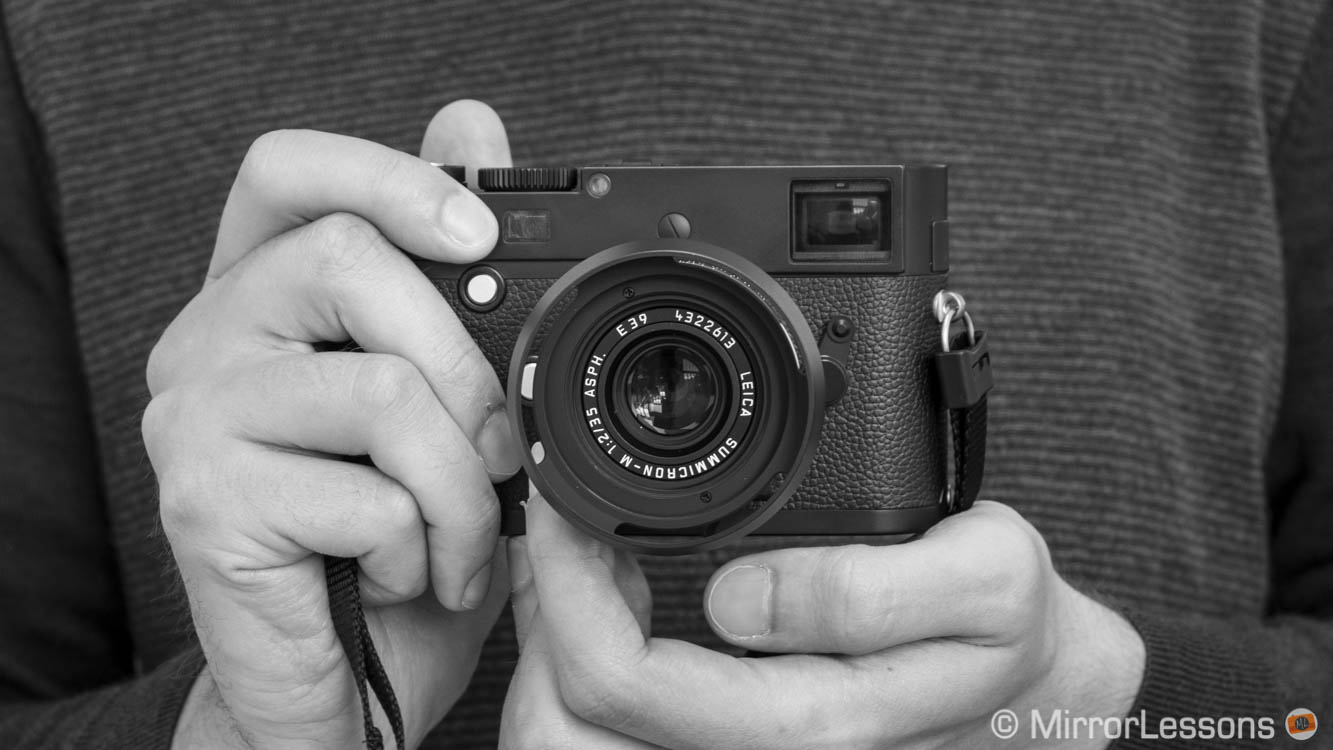 Update: our full review of the Leica Monochrom 246 is now online!

As rumours predicted, today Leica announced the new M Monochrom (Typ 246) which replaces the first digital Monochrom released back in 2012. The camera is essentially a Leica M Typ 240 with the difference that it only delivers black and white images. This is because it houses a special sensor that lacks the colour filter array. It is a very specific camera for a very specific niche, but coming from Leica, this is certainly not a surprise.

Below is a quick hands-on video about the camera.

As in the case of the first Monochrome, the new version has a minimalistic appearance with a black matte finish and no logo or markings on the body. It is the most discreet and low-profile M camera in the Leica series. The design is exactly the same as the Leica M-P 240 and the body is made of robust magnesium alloy. It shares the same LCD with sapphire glass which is both scratch resistant and includes an anti-reflection coating.

In the hands it feels exactly like every other Leica. Not only do you get the same controls but the button layout on the rear is the same as the M 240. Inside the menu there are a few changes in comparison to the M 240 that are mainly related to the picture profiles. You can choose toning (sepia, blue and selenium) and shading correction.

The camera includes the same features introduced on the M Typ 240. The LCD screen has the same resolution and there is the Live View option with focus peaking and focus magnification. All the accessories compatible with the M Typ 240 work with the new Monochrom as well. Leica has also introduced a new set of Black & White filters. They are available in 3 colours (yellow, green and orange) and two different size threads (39 and 46mm). Leica has stated that these two diameters reflect the most commonly used M lenses. 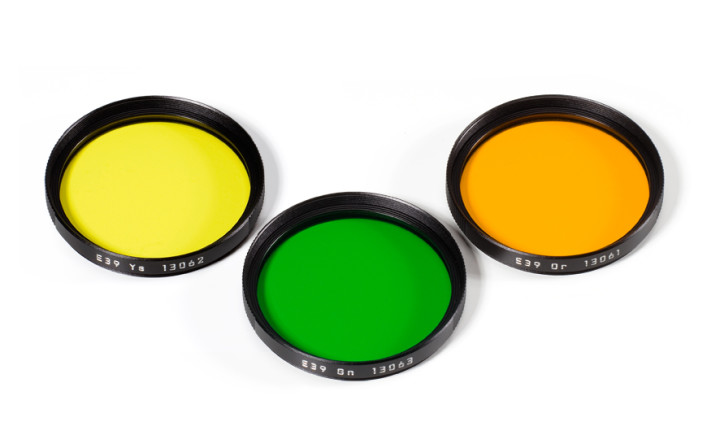 We were authorised to take pictures with our own memory card during the press event. Leica also gave us a series of very nice black and white image samples taken with the new camera so we already have an idea of just how good the image quality is.

In case your aren’t familiar with the Monochrom, the technology behind it is actually very simple: the sensor is the same as the M 240 but lacks the colour filter. This means that interpolation, which is necessary for the colour version, is not required. The sensor also lacks an AA filter and thus delivers very sharp results. Additionally, thanks to the lack of a colour filter, its high ISO capabilities are also better. In fact, it can shoot up to 25600 ISO with excellent results. The image processor is the same Maestro version as the M 240.

One of the first things I was curious to try with the new sensor was the ability to preserve information in the highlights, one of the weak points that many users reported about the first M Monochrom. I have no experience with the first Monochrom camera so I simply took a few shots with strong contrast and overexposed the highlights a little to see how much I could recover in Lightroom 6. Note that the camera shoots in 14 bit DNG (Raw) with compressed and uncompressed options. For the following examples, you can move the slider to see the difference between the original and post-processed shot.

In the first example, I was able to recover only a few details outside the window but the difference in exposure between the outside and inside was severe. I had fewer problems with the shadows. In the second example, I overexposed the clouds by approximately 1Ev but couldn’t recover all the details (especially on the left where a portion of the cloud is clipped). The third example shows the maximum I could recover on Heather’s skin (overexposed by approximately 3 Ev). Of course these are just some quick tests but it does seem that highlights tend to be weaker on the MM 246 whereas the shadows are easier to recover. This doesn’t concern me too much since with digital I always tend to expose for the highlights more than the shadows but I think it is even more important on this camera. 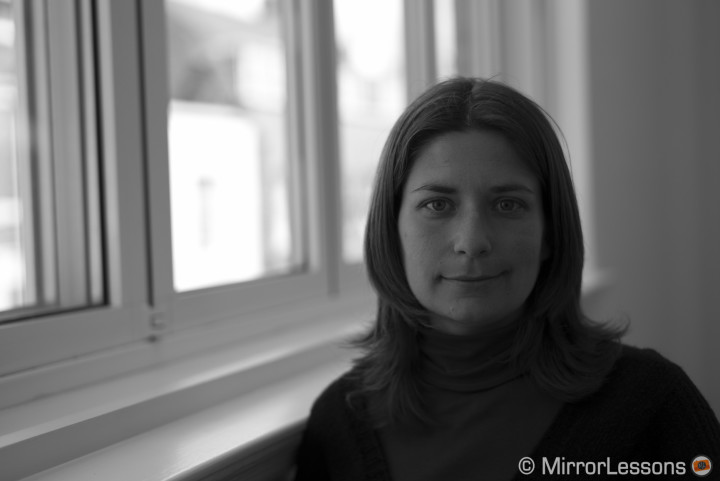 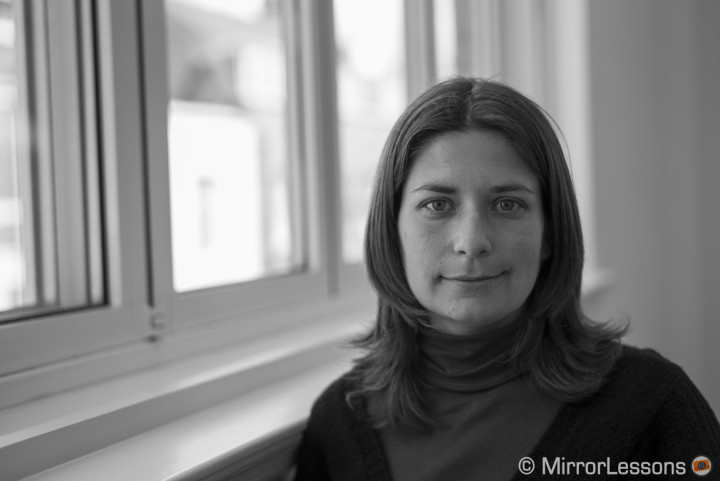 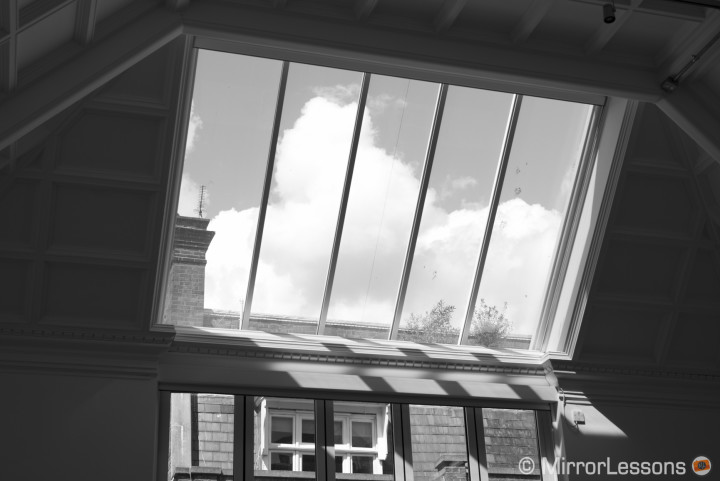 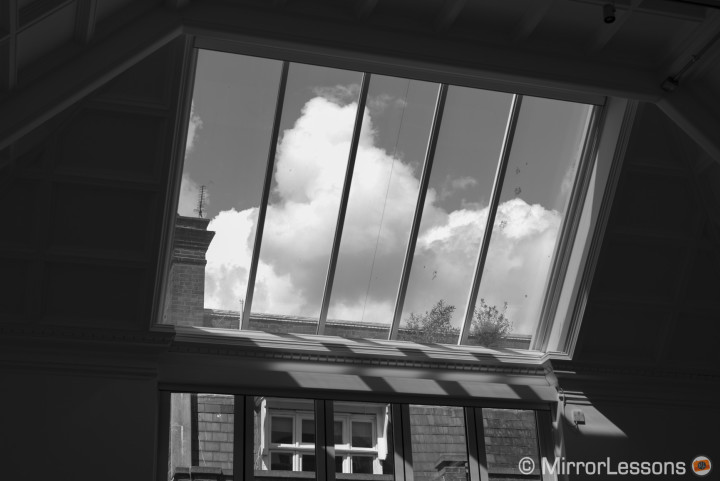 The monochrome capabilities of this camera are quite interesting. It is easy to appreciate the image quality if you look at the gallery of official shots at the end of this article but it was also evident from the first shots we were able to take around the Leica store. The images have a very nice and delicate contrast with lots of detail and exceptional sharpness. The OOC JPGs also look really good.

There are different toning effects that you can apply to the JPGs like sepia or selenium toning. We also took a few high ISO shots and the results have a nice organic feel with very little noise.

Update: as Jim pointed out in the comments, there is some trace of banding in the two 12500 ISO shots. This is probably caused in part by the artificial light in the corridor but it is worth further investigation in the full review.

Like the M 240, the new Monochrom can also record video at 1080p and 25fps. Of course, you will only get black and white footage! The settings and options for video remain as limited as the M 240 but you can shoot in manual mode. You can check out a few video samples in the hands-on video at the beginning of the article (starting at 1:29).

Other features worth highlighting are the 2GB buffer and 4fps capabilities like the M-P Typ 240.

The differences between the two models parallel the differences between the M9 and M 240. The new M 246 represents the equivalent upgrade but for black and white. The sensor is a “Made in Belgium” 24mp CMOS in comparison to the 18MP CCD of the first MM. There is an improvement in ISO sensitivity (up to 25600 in comparison to the max. 10000 ISO of the first MM). Of course you get live view, peaking and video capabilities, all features that are missing on the first Leica Monochrom.

At the beginning, the original Monochrom camera was supposed to be a limited edition but its unexpected popularity prompted Leica to change its plans. The new M Monochrom Typ 246 is an M that only shoots black and white. There isn’t a simpler sentence to introduce this camera. It includes all the features that the M Typ 240 and M-P Typ 240 have but looks even more discreet and stealthy thanks to its pure black matte finish.

Certainly as with the first Monochrom, many of you will raise the question about the necessity of a digital camera that limits the photographer to black and white. To comment more on this however I’ll have to test the camera completely. Unfortunately I haven’t ever tried the first Monochrom camera so I can’t compare the differences in image quality, nor can I comment on whether it is worth the high price.

What I do remember however are some absolutely stunning large prints I saw last year at the New Old Camera store in Milan. The degree of sharpness and detail was stunning. One of the thoughts I had while analysing these prints was that it could even be perceived as too much.

I can’t wait to have more time with the camera and print some images from it. It’ll be the ultimate test to see if I could ever live with only black and white!

The Monochrom Typ 246 will be available in May at the retail price of £5750 ($7450). The first Monochrom camera is still in production but the production line should end soon. Perhaps this will result in some interesting deals and the appearance of more second-hand models.

Update: our full review of the Leica Monochrom 246 is now online!

To finish off, you can check out a gallery of beautiful images taken by Ragnar Axelsson in Iceland below.

What are your thoughts about the new Leica M Monochrom 246? Let us know in the comments section below!