You are here: Home / Guest Post / The Champions Go for a Drive – Guest Post by Hugh Hastings 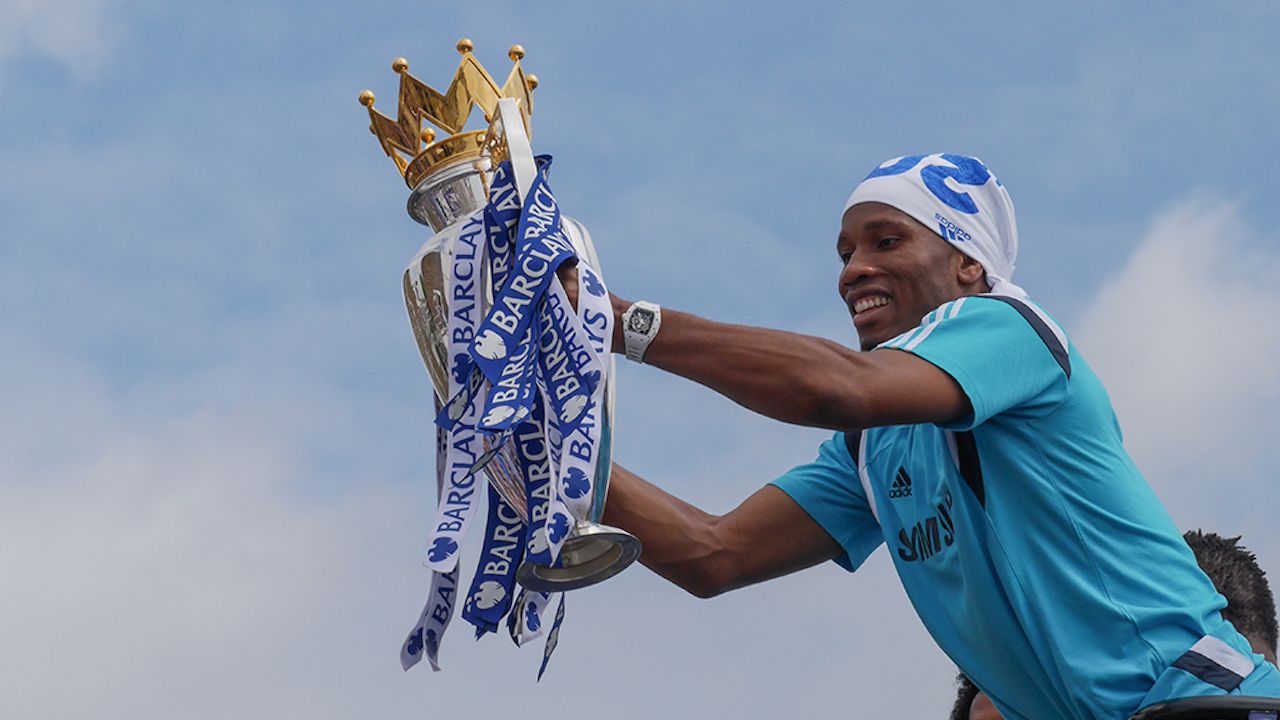 All images are property of Hugh Hastings and used with permission.

The time is half-past-high noon in posh south west London and have I am standing in a fenced-off part of high value real estate being pelted by sticks of celery from some of the 100,000 people gathered here.

It’s the day after the end of the English football season and the new champions, Chelsea FC, are about to go on their open top bus victory parade through the closed-off streets of Fulham. My job is to walk in front of the convoy of three buses on their mile-long journey and capture images of the team celebrating. I am the only photographer accredited by Chelsea to this position and for company I have just twenty-two security guards walking alongside me in strict v-shaped formation.

The celery thing goes back a long way, almost as far back as when I was Chelsea’s official photographer for ten years back in the dark days for the club of the mid-1970’s to 80s. There is even a celery song which is too rude for this journal. Today there must be a shortage of it in South west London as the fans are chucking it everywhere and the players send it back with friendly interest.

I last shot this scene in 2012, with a DSLR, and the current official club photographer, Darren Walsh, is positioned among the players on the top deck, with his Nikon DS4s. There was one for me to use too, but I have an inkling that the lighter Lumix GX7 with the 100-300mm lens will be a great combination on a day when I need to move fast, walking constantly backwards and not miss a shot.

I was exclusively a DSLR man myself for a long while, but these days I use Leica S medium format, a Leica M240P and Lumix. An unusual combination. But there’s a logic to it. Each job is different in terms of the images required and also what the client expects. Some clients are happy – by which I mean happy to pay – only when they see the big Leica on a tripod. It was ever thus.

But oddly enough the Lumix is the only gear I take on every single job and I do so because it takes care of the extremities for me. By that I mean extreme wide angle – through the great little 7-14mm – and at the other end the 100-300mm which effectively puts the equivalent in 35mm format terms of a 600 mm lens in my hands, at a fraction of the weight.

It’s a strange lens the Lumix 100-300mm. It is so much better then one would expect, for the range it covers, and for the very reasonable price. With a bit of good light to help it along it’s a real joy to use. Today that is crucial, as events unfold rapidly, the coach motoring through the crowded streets amidst the barrage of noise, extremely tight security,  a TV crew and the flying vegetables.

I find the best option is to run ahead of the bus and the vast entourage of security, so I can use the top end of the 300mm range and look back at the bus with the flattest angle possible. This isolates the players on the bus from the background and gets me as close as I need to be to pick out the expressions of the players. These are the views that the club will soon make available to the world’s media through their media partners the Press Association.

The shooting technique is quite relaxed in the circumstances : looking down into the angled viewfinder somehow creates a detachment from the action that allows me to calmly frame each shot, while watching the behaviour of the payers to sense what is about to happen next. As with sports work itself, you somehow need to be in the moment, but also ahead of the game!

After running off a few frames I have to readjust my position, literally or I will be run over, so a quick jog 100 meters up the road, turn round and repeat. It helped that before hand I had a request from the wife of the lead driver, to take a personal photo of him for their wall. This sort of thing can be done, but it is always organised. A few emails int he week before hand and I was cleared by the club’s media chief to ask Jose Mourinho if he would stand with the driver for a quick portrait. The goodwill engendered by this sort of two-second request can last a lifetime, it not longer.

Jobs like this one that involve action and movement are always the same. The first few minutes are a blur when you think you cannot possibly get the shots required. Everything seems to happen much too quickly and your mind and body seem to be wallowing in treacle.  Then you get into the pace of the shoot and all is well.

All photographic assignments have their own pace. Like cameras. Sometimes it is leisurely, sometimes it is chaotic. The medium format Leica S sets a tempo that is measured, precise, solid and very Germanic. I love using it for architectural work, when large file sizes are required and I have the luxury of working at a pace dictated by the equipment, not the subject.

Then there is the Leica M240-P, a rangefinder of course. That imposes something beautiful or annoying,  depending on your experience and also probably your age. I use it for working with people as I like its size and handle, and it seems to both comfort people and reassure them. I shoot with it on the parade when I need to climb on board the bus carrying the Chelsea youth team for a few minutes to take close-up shots.

The Lumix G is all about speed, lightness, rapid fire. The image quality of these small micro-four-thirds cameras is no longer a worry, especially with the great lenses and 16+ megapixel performance.  Sure, leave it out in the rain overnight and it might not like it. But it is not meant for that. Not yet.

The bus procession reaches its destination and the celery rains down, much too accurately to be random. I ask a security man where it is coming from. “From the players,” he says, and they grin down at me, all innocence. It all helps to make good shots. They know I work for the Club so anything goes, and Darren Walsh will be soaked in champagne by now, as befits the very close relationship he has with the squad. For my part, the GX7 is covered in champagne spray and the lens hood actually has lumps of celery stuck to it. Exuberance like this is ok, it’s young men at play.

At days-end I work through the images and send 120 pictures online to the Press Association to accompany the ones that Darren has taken on board the bus. Most of mine the are taken with the Lumix. As I write, one of the these shots has acquired over 142,000 “likes” on the Chelsea Instagram account. And so this is another small chapter in the growth and popularity of mirror less; not yet a torrent in professional terms, but a lot more than a trickle and we are surely only a lens or two away from further take up by even more of the world’s media.

Hugh Hastings is a professional photographer who also manages the Chelsea FC Photo Archive. He is a Leica and Panasonic Ambassador and is the founder of World Camera.Org. You can follow him on Twitter and check out his official website here.