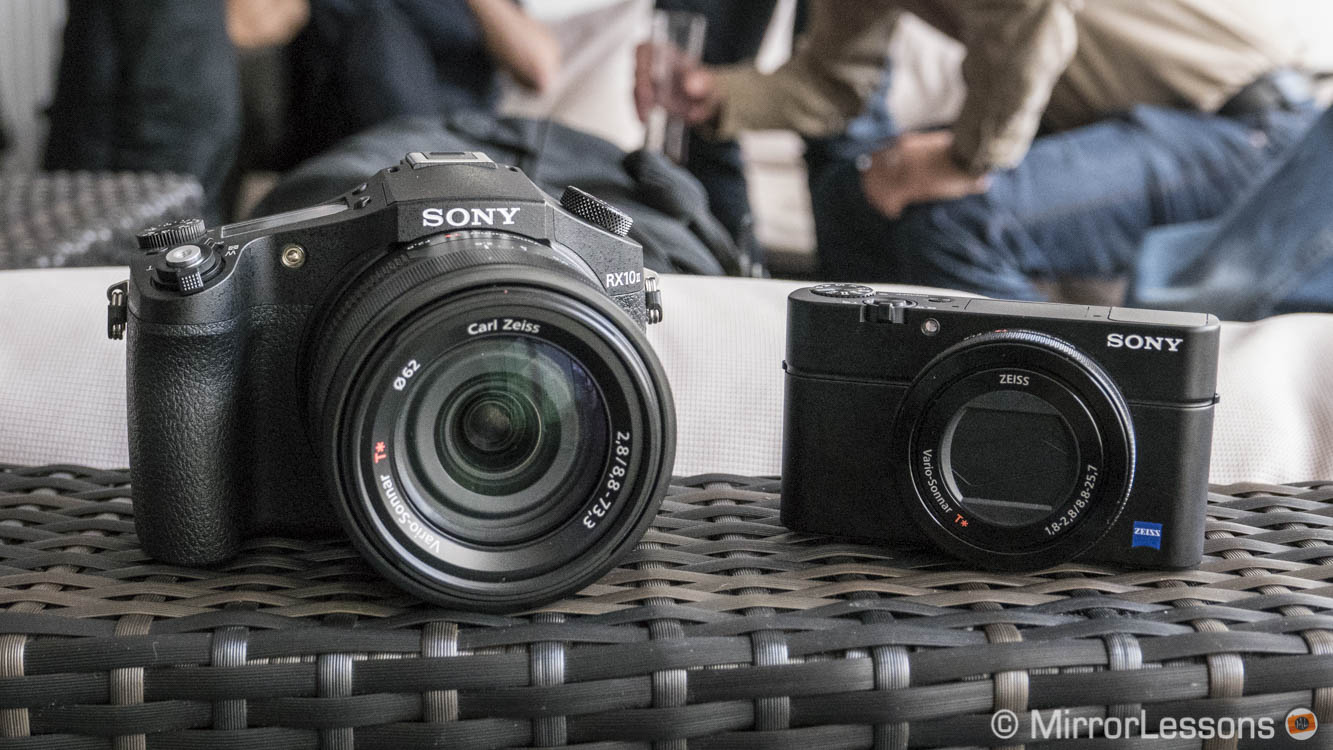 When the Sony A7r mark II was announced a week ago, with its full frame sensor, lots of megapixels and a new exciting autofocus system, it stole the spotlight from two other cameras that the Japanese brand released at the same time. However, these other two cameras – the RX100 Mk4 and RX10 Mk2 – shouldn’t be underestimated because they could give us a sneak peek of what’s to come on future products.

The RX100 embodies a concept that I personally really like: a truly pocketable camera with a level of performance that isn’t far off other larger cameras. When I reviewed the second version of the camera two years ago, I was surprised by the image quality that the 1 inch sensor was capable of producing. With the third version, they even managed to implement a pop-up built-in electronic viewfinder. The RX10 on the other hand looks more like a large bridge camera that features an f/2.8 constant aperture zoom with a range of 24-200mm (full frame equivalent), which makes it versatile for different situations. One Italian colleague of mine, Davide Grimoldi, used the first RX10 several times for video shooting in the mountains as he found it really comfortable to use.

The new versions of these two cameras feature some very interesting improvements especially regarding speed and video.

As with the A7r II, we had the chance to test the new RX10 and RX100 at the Sony European press event. The cameras were pre-production models so we weren’t allowed to use our own SD cards. However we managed to have sneak peek at the most interesting new features, many of which can also be seen in the video below.

A new sensor with RAM memory

The RX10 Mk2 and RX100 Mk4 have the same 20MP 1 inch sensor as the previous models. It is my understanding however that the sensor is an upgraded version, even if the resolution and sensitivity (100/125-12800) specs haven’t changed. But what is more important is that both cameras include the world’s first stacked image sensor with a DRAM chip. DRAM is similar to the Random Access Memory you can find on your laptop or desktop computer. It allows the camera’s image processor to work 5 times faster than usual with a 5x faster readout. Concretely speaking, this means that the camera is capable of a higher performance.

Indeed, the specs of the new RX10 II and RX100 IV are quite stunning: 16fps/14fps continuous shooting without blackout (so unlimited buffer memory), electronic shutter with anti-distortion, 4K movie recorded internally and slow motion video capabilities up to 1000fps.

It is quite amazing that a camera as small as the RX100, which can literally fit into a jean pocket, is capable of such high performance.

A few years ago these specs could only be found on expensive top-end DSLRs or very expensive pro cinema cameras.

There are two reasons I find this new stacked sensor so interesting. First, the two cameras have what Sony calls an Anti-Distortion shutter which reduces the rolling shutter issue that occurs when recording video and when using the electronic shutter. This is the first time that I’ve see a new feature designed specifically to reduce one of the major issues large sensors have produced. Thanks to the DRAM chip, the camera has a faster pixel readout and can therefore minimise rolling shutter. In my brief test at the press event, I noticed that it is more effective for stills when using the electronic shutter than for video. Sony also confirmed that for now it works primarly for stills. They also told me that it works for video as well but isn’t as effective.

The second reason is that this new stacked DRAM technology could be seen in other sensors in the future as well. I specifically ask Sony about this and of course they couldn’t tell me anything related to future products, but they did tell me that as long as there is an Exmor R sensor involved, theoretically it could be possible.

Let’s imagine for a second a future a6000 or even an A7 camera with DRAM memory and better buffer capabilities.

Could this technology evolve in that direction? It would be very interesting indeed if it did!

During the hands-on event, I tested the burst capabilities of the two cameras and when shooting 20MP Fine JPGs, the buffer is indeed unlimited. The RX100 mark IV can shoot (with the electronic shutter) up to 16fps while the RX10 mark II goes up to 14fps. However this high performance is possible only if you are in speed priority and not focus priority and in AF-Single mode. In AF-C, the focus is locked on the first frame. If you want to use continuous autofocus, the speed is reduced to 5.5fps.

Both cameras feature an electronic shutter and the maximum speed is 1/32000s. That allows users to record in extremely bright conditions up to EV19 (in combination with the built-in ND filter).

Both cameras can also record 4K internally with the XAVC S codec (the same one found on the A7r mark II). The RX100 IV is limited to 5 minutes while the RX10 II can record up to 29minutes. I suppose that the limit on the RX100 has something to do with overheating. More importantly, 4K recording is done with full pixel readout without pixel binning which reduces moiré and aliasing problems. During 4K recording, you can still take some still pictures in JPG mode at a maximum resolution of 17mp. There isn’t a 4K Photo mode as found on Panasonic cameras. Both cameras have a clean HDMI output with 4:2:2 8bit.

Then we have the slow motion capabilities. Both cameras can record at an impressive rate of 1000fps – however, there is a catch.

Now what is interesting about the data above is that the camera can record 250fps at a resolution that is almost as large as Full HD (1920×1080). This is quite good – the only similar performance you can find is on the Sony Pr Camcorder FS700. With the other settings, not only do you get less resolution but also a different aspect ratio. For example 1676 x 566 is not in the traditional 16:9 format but something similar to 8:3 which is more panoramic. The same applies to the other resolutions shown above except for the first one.

The cameras loads the 2s or 4s video into the virtual memory first, then writes the files onto the SD card. It doesn’t happen in real time. You can however select two different trigger timings (Start trigger or End trigger).

During the presentation, we watched a few examples on the big screen (the same you can find on the official Sony YouTube accounts). While the high frame rate is indeed impressive I noticed less sharpness and dynamic range (more blown highlights). Of course all this needs to be tested further to really understand the potential. High frame rates in mirrorless cameras is not something new as the Nikon 1 series is already capable of HFR but at lower resolution. The RX10 and RX100 bring these options to a higher level of quality and definitely make them usable.

These two frame rates are part of the normal recording formats available for the camera so they aren’t limited by the HFR feature.

From a design point of view, both cameras look identical to their predecessors.

With the RX100 mark IV, there is a welcome upgrade to the electronic viewfinder, which has now double the resolution (2,359k dots) but remains the same size. The LCD screen can also be tilted up to 180° for selfies, just like on the RX100 III. The camera includes the picture profiles and S-log2 found on the A7s.

The RX10 II has a few more improvements. The body is now made of magnesium alloy and is dust and moisture resistant. The EVF has the same 2,359k resolution, and the mic input and a headphone jack output found on the original model are still there. The AF motor has been improved with a 0.09s performance. During my brief test, I noticed that the autofocus was fast but I didn’t see a tangible difference with the previous camera. For video, the camera also includes the same picture profiles as the A7s and A7r mark II (including the Slog2).

During the introduction at the press event, Sony explained how products for professionals and consumers are starting to merge, just as the line between video and photo products is becoming less and less defined. The RX10 II and the RX100 IV are certainly a very good example of this. In fact, you could even say that the performance of a camera like the RX100 Mk4 is too much for a compact camera. However, not only does it show that Sony is intent of staying ahead of the game, but it also represents an evolution in technology that could be found on other, more advanced cameras in the future, and that is the real take-home message of this hands-on review.

Both cameras will be available in the summer. Don’t expect these cameras to be cheap, as the official retail prices are nearly $950 for the RX100 IV and $1300 for the RX10 II!