You are here: Home / Camera Reviews / First impressions of the Sony RX100 III: Is it worth upgrading from the RX100 II? 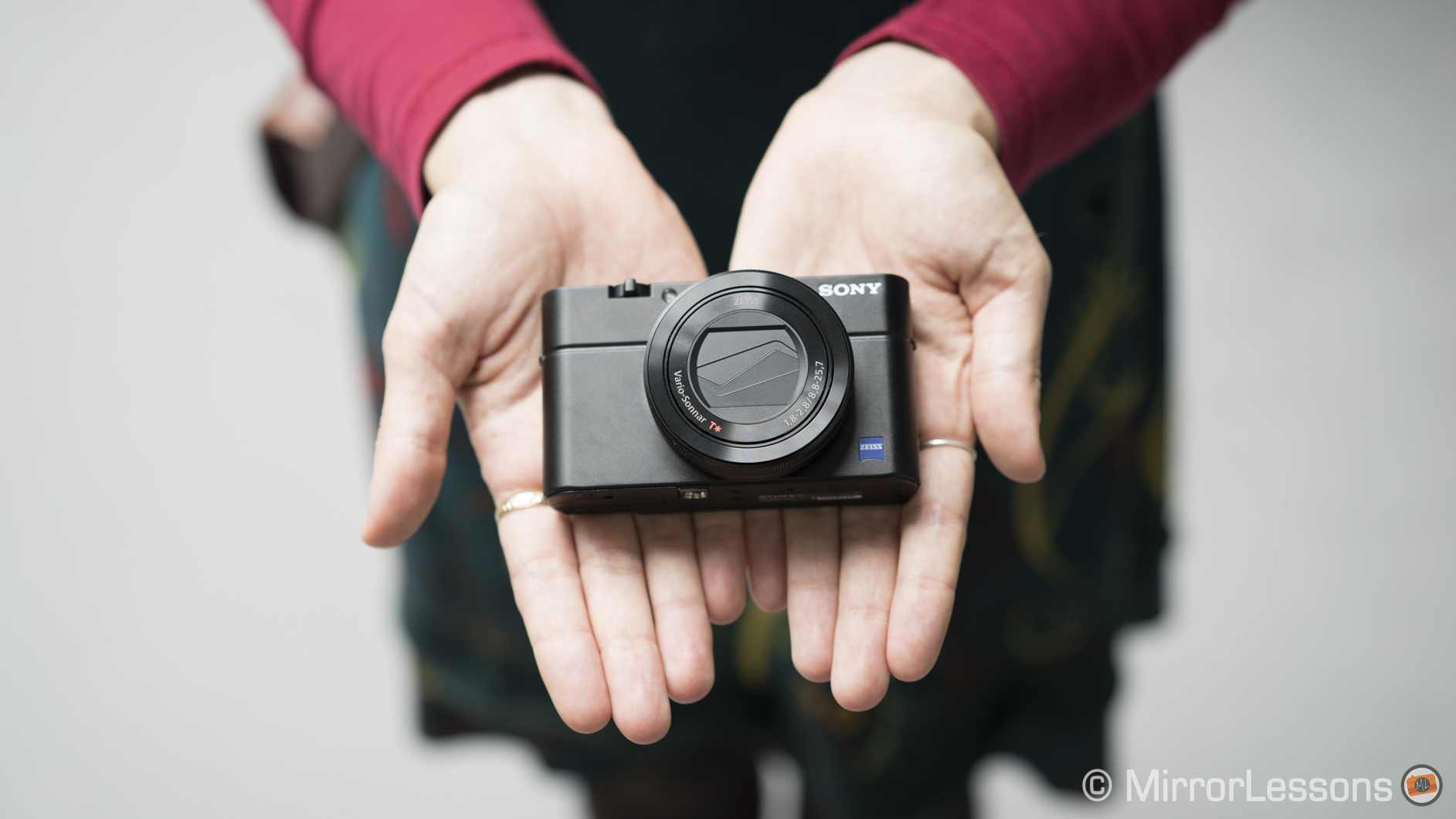 If you’ve been following MirrorLessons from the beginning, you might remember that we purchased a Sony RX100 II for our holiday in Wales last year. Even back then, we were highly impressed by the way Sony managed to merge high-end technology and compactness into one body. It was the first mirrorless camera that truly lived up to the definition of “pocketable” while producing images of such quality that one would feel comfortable submitting them to a client.

As such, you can imagine that we were pretty eager to try the Sony RX100 III as well. The chance finally presented itself at the Sony Italia Press Conference we attended last week, where a number of the most recent cameras and lenses were on display, including the QX1 lens-style camera with an APS-C sensor. (Sadly, no sign of a working 16-35mm f/4 yet!)

It needs to be said right off the bat that the RX100 III has the same 1-inch 20MP sensor as the RX100 II, and thus the same overall image quality. Any differences are the result of the new Bionz X processor, which was inherited from the full-frame A7 and A7r. According to the official specs, the processor brings three main changes to JPG processing: Detail Reproduction Technology (prevents the overemphasised outlines that plague most digital images), Diffraction Compensation (suppresses the effects of diffraction), and area-specific noise reduction. The RAW files are unaffected by the processing. According to Imaging Resource, the RX100 III JPGs actually exhibit a little more noise at high ISOs, but I could not compare the two as there wasn’t an RX100 II demo at the event.

Below is an image gallery that will give you an idea of the quality of the sensor. Alternatively, you can check out our RX100 II gallery from our climb up Bird Rock in Wales last year. You can expect the image quality to be almost identical.

The two biggest differences you’ll find on the RX100 III compared to its predecessor are:

Since the Sony event was only about an hour long, I made a point to focus on these two improvements and see if they make a difference to the overall user experience.

At first glance, you may be disappointed to discover that the 28-100mm zoom on the RX100 II has been replaced by a shorter 24-70mm zoom on the RX100 III. However, where we’ve lost 30mm in reach, we’ve gained a brighter aperture of f/2.8 (as opposed to f/4 on the RX100 II) at 70mm. With this bright aperture, subject isolation and blurry backgrounds for portraits and close-ups become easier to achieve, as does shooting in poor light conditions since an aperture of 2.8 will collect twice as much light as f/4.

Below you can see a small gallery of photos taken at the RX100 III’s maximum focal length of 70mm at f/2.8. Thankfully, there was no sign of vignetting or distortion. I have to say that I’m not crazy about the bokeh produced by the lens at f/2.8, and to achieve a sufficiently out-of-focus background, you need to be quite close to your subject. That said, having the option to use an aperture this fast at all focal lengths can be very useful for low-light shooting.

Please forgive the lack of interesting subjects–it was just a showroom after all! 🙂

A built-in viewfinder on a tiny body

Another amazing feat of the RX100 III is the built-in pop-up electronic viewfinder which snugly sits on the top-left of the camera. It is one of the only large-sensor compact cameras to offer a built-in EVF. To activate the viewfinder, all you have to do is push down the Finder switch on the left-hand side and slide out the eyepiece. The video below should give you a good idea of just how easy it is to use.

It is true that the image is bright and the resolution at 1.44 million dots is high but these two advantages don’t distract you from the fact that it is very small. I sometimes found myself squinting to clearly see the image, which started to give me a headache after about 30 minutes of shooting. The experience was actually quite similar to the one I had with the little Lumix GM5 at Photokina. This isn’t a criticism, as it is quite amazing Sony was able to fit an EVF on this camera at all, but a simple observation. If I were to buy this camera for my own personal shooting, I would probably end up using the EVF in emergency situations, such as when it becomes difficult to see the LCD screen due to excessive sunlight.

What else has been improved?

While the new lens and built-in EVF are the two big selling points of the RX100 III, a number of minor improvements have also been made to the camera.

The first is the built-in ND filter. We already appreciated this feature on the Fujifilm X100s, and it should prove even more useful for shooting in bright sunlight on the RX100 III, which has a maximum shutter speed of only 1/2000 of a second. Being inside a building on a cloudy day, this was unfortunately an aspect I could not test.

The second is the XAVC S 50Mbps codec which allows for high-quality video recording. However, you can’t really take full advantage of the video improvements because there is no hot-shoe to mount an external microphone. (It was removed to make room for the built-in EVF.) The camera doesn’t have a microphone input jack either, so you are pretty much stuck with the quality of the built-in microphone. That said, it could potentially prove quite useful as a second or third body that accompanies a high-end Alpha camera, especially if you’re working in very tight spaces.

Another fun yet somewhat superfluous feature, especially for professionals, is the “selfie” mode. By flipping the LCD screen up 180 degrees, a 3-second timer will activate when you press the shutter button, giving you time to pose. The EVF does not interfere with the tilting function of the LCD but does block a tiny segment of the screen as you can see below. To keep pace with the selfie revolution, we’ll no doubt see more and more cameras with this kind of feature in the future.

Conclusion: Does an upgrade make sense?

The Sony RX100 III is a camera I’d love to have more time to experiment with out in the field. It brings back memories of everything that was wonderful about the RX100 II while adding its own set of innovative features that make your shooting experience more enjoyable. To combat shooting in bright sunlight, the built-in EVF and ND filter will most definitely prove useful while the bright lens will allow for shallow depth of field and subject isolation across all focal lengths.

If you already own the RX100 II, miss having an EVF and don’t mind the loss of 30mm, you don’t even have to think twice about upgrading: the RX100 III is the camera for you.

If, on the other hand, you are keen on keeping those extra 30mm and don’t care about the EVF, you may even want to look beyond the Sony line-up at the slightly cheaper Canon G7X, which also has a 20MP 1-inch sensor with the bonus of an amazing 24-100mm f/1.8-2.8 lens.

Or you could simply keep the RX100 II: it remains a great camera! 🙂