You are here: Home / Camera Reviews / A Day at the Erddig Historic House – A “Mini” Panasonic G7 Review 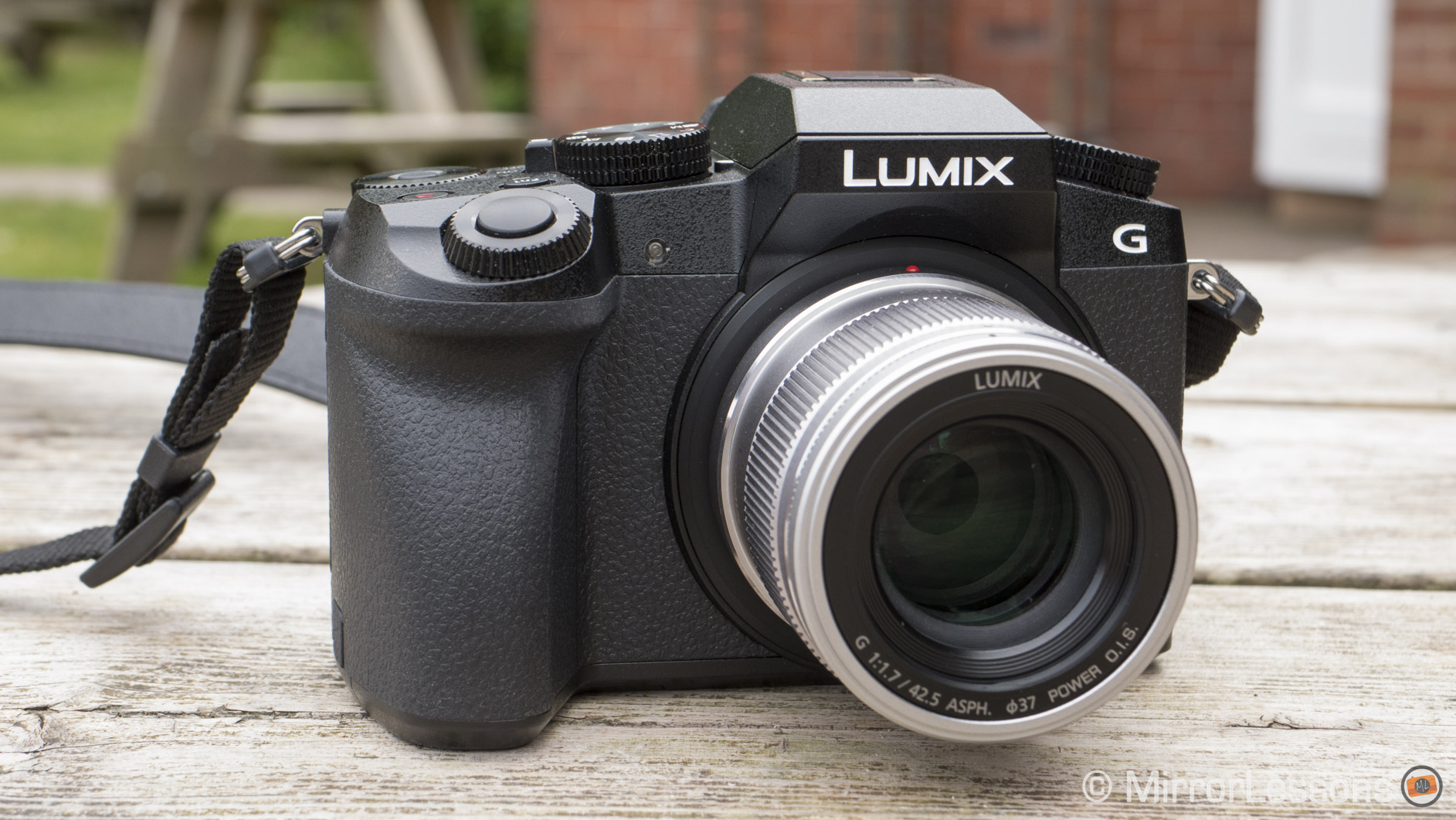 This past Saturday, Mathieu and I were invited to a photo event held by Panasonic UK in association with the National Trust and Erddig, one of Wales’ most famed historic houses with a 1200-acre country park and extensive walled garden.

At the event, visitors were invited to try Panasonic’s wide array of Lumix cameras, from their point-and-shoot range to the high-end GH4. One of the newest cameras on display with the Lumix G7, the latest product in the G line-up and a significant upgrade from its predecessor, the G6.

Since we only had couple of hours with a pre-production version of the camera, along with the new 30mm f/2.8 macro and the 42.5mm f/1.7, we had to limit ourselves to writing a “mini” review – more than just a simple hands-on but less complete than a full review.

I apologise in advance for the somewhat gloomy images. Despite a positive start to the day, a raincloud decided park overtop of Erddig and douse us in the odd shower. “That’s Wales for you!” you might say, but in actual fact, this was the first rainy day we’d had in nearly three months!

Below you can watch a quick hands-on video by Mat:

The G7 is just a little smaller than its predecessor, the G6. It features a brand new design, ditching the G series’ streamlined appearance in exchange for a more angular look. I have to say that it is by far the best looking G series camera yet. The prominent grip remains as comfortable as it was on the G6 thanks to the textured coating and ergonomic form, and is accompanied by a well-designed thumb rest on the rear.

A modification I sincerely appreciate on the G7 are the twin dials on top, replacing the smaller imbedded dial and function lever on the G6. They turn smoothly yet have good resistance, and make it easy to perform quick adjustments to aperture and shutter speed, even when your eye is at the viewfinder.

Speaking of the viewfinder, the G7 now has a 2,360k dot OLED electronic viewfinder – almost double the resolution of that on the G6. It is clear, large and crisp at the centre but displays some fuzziness in the corners.

The 1,040k dot swivelling LCD is as good as any thanks to its reactive touch display and clarity. Though I am a big proponent of touch screens, I tend to turn off the “Touchpad AF” option because when you are using the viewfinder in portrait mode on the G7, your nose will inevitably come into contact with the screen and change your AF point.

Another valuable addition to the G7 is the drive dial on the top left. In addition to the basic modes with which we are all familiar (single, burst, exposure bracketing, timer), we now have the brand new 4K Photo option. Setting the dial to this mode will allow you to pick between three useful 4K Photo modes, which I will talk more about later on.

In keeping with true Panasonic tradition, the G7 has a total of 11 function buttons – six physical buttons on the body and five virtual buttons in the menu. I’ve always enjoyed just how customisable Lumix cameras are, and the G7 is no exception. It also comes with a mic input that can record stereo sound. Unfortunately there isn’t a headphone output.

The G7 houses the same 16MP Micro Four Thirds sensor as the GX7 and LX100, a significant upgrade from the G6 but still not quite on par with the GH4. However, since the G7 has a more recent processor than the GX7 or LX100 (the Venus Engine 9), the image quality should be marginally better, though further tests are needed to confirm this.

Relating to image quality is a new feature called Diffraction Compensation, which can be activated from the menu. When it is set to Auto (the only option available), it sharpens JPGs at the smaller apertures.

The ISO range has been expanded from 160-12800 on the G6 to 200-25600 with an extended of ISO 100. From what I can see from the shots we took inside Erddig house, the performance is good up to about ISO 3200 if you’re picky and ISO 6400 if you’re happy to accept some noise and loss in detail, which is more or less what you’d expect from this sensor.

I especially liked the way the sensor renders detail when paired with the new 30mm macro lens. The combination produces very sharp results as you can see from these two full resolution samples below.

We didn’t have enough time with the G7 to perform a number of in-depth tests, but what I can say is that the G7 is certainly on equal footing with other Lumix cameras.

Like the GH4, the G7 employs a contrast detection autofocus system combined with Panasonic’s new Depth from Defocus technology whereby it calculates the distance to the subject by evaluating two images with different sharpness levels. From our experience with the GH4, it is fast and effective for both stills and video, and seems to perform just as well on the G7. It is actually one of the best AF systems of all mirrorless cameras.

The camera can shoot at 8 fps in Single-AF mode and 6 fps in Continuous AF mode, and can also support UHS-II memory cards, meaning that we should be able to eek better performance out of the buffer in burst mode. The maximum speed of the mechanical shutter is 1/4000, whereas the electronic shutter can go up to 1/16000, which is perfect when you require a fast aperture in sunny conditions. Unfortunately, I could not test any these features during the event but the specifications alone suggest a significant improvement over the G6.

In addition, the Starlight AF function makes it possible for the G7 to focus in conditions as dark as -4 EV. Even while walking around the dark rooms and corridors of the Erddig house, we noticed that the G7’s autofocus performance never experienced a hiccup, but as always, further testing is needed before we can draw any conclusions.

One feature I had the chance to play around with more than the others was the 4K Photo Mode, which exists on the GH4 and LX100 but has been expanded on the G7. Its conspicuous placement on the right-hand mode dial alongside the various burst, bracketing and timer modes reveals just how important this feature is to Panasonic, and how it plans to differentiate itself from its main 4K competitors, Sony and Samsung.

You can select three different 4K Photo modes from the dial or the quick menu, all of which are currently unique to the Lumix G7.

You can extract 8MP JPG from any of the 4K footage obtained in these modes by simply skimming through the various frames on-screen and saving your favourite.

I tried all three modes on the bumble bees in the expansive Erddig gardens and found them extremely useful for capturing the fast-moving insects – specifically, as they were buzzing towards or away from a flower. The most useful of the three was 4K Pre-burst, as I could start recording even after the bee had landed on the flower and still end up with a shot of it in flight thanks to the preceding 30 frames.

You can see a few examples in Mat’s hands-on video at the begining of this article.

I did notice that extensive use of these modes will drain your battery life much more quickly than with stills. According to Panasonic, the G7 is capable of taking 330 shots on one charge. However, with 4K video recording, the battery life will drop more rapidly.

At the beginning of Mat’s hands-on video, you can watch some ungraded 4K footage recorded with the G7. Here as well, the cameras inherits many specs from the GH4: you can record 4K video up to 30fps and Full HD up to 60fps. The camera includes the Cine-Like D and Cine-Like V picture profiles especially designed for video, as well as useful features such as zebra pattern and flicker reduction.

In comparison to the GH4, you’ll notice that it lacks the .mov file type (you can choose between MP4 and AVCHD only), a higher bitrate (100mbps for 4K and 28mbps only for Full HD in comparison to the 200mbps of the GH4), higher frame rates in Full HD (the GH4 can go up to 96fps) and the Cinema 4K aspect ratio. It is also missing some useful features such as colour bars and timecode.

Two weeks ago, we spoke about the X-T10 looking and behaving like a miniature version of the X-T1. The very same could be said of the Panasonic G7 compared to the GH4, although admittedly more in terms of specifications than appearance. It has good 4K video capabilities, 4K Photo (with more advanced features than the GH4), Depth from Defocus autofocus technology, and a professional SLR-like body with a significant grip and many external dials and function buttons.

The potential user base of this camera is quite large, from amateur filmmakers, to GH4-toting professionals in need of a second body, to photographers interested in a body equally capable of stills and video. Add to this the very attractive price tag of $800 with the 14-42mm kit lens, and you have yourself a product that’s hard to refuse.

If you would like to test drive a Lumix camera for yourself, why not attend one of Panasonic UK’s National Trust events. The full list of events can be found on the official Panasonic website, and are being held throughout the summer in various locations across the UK.