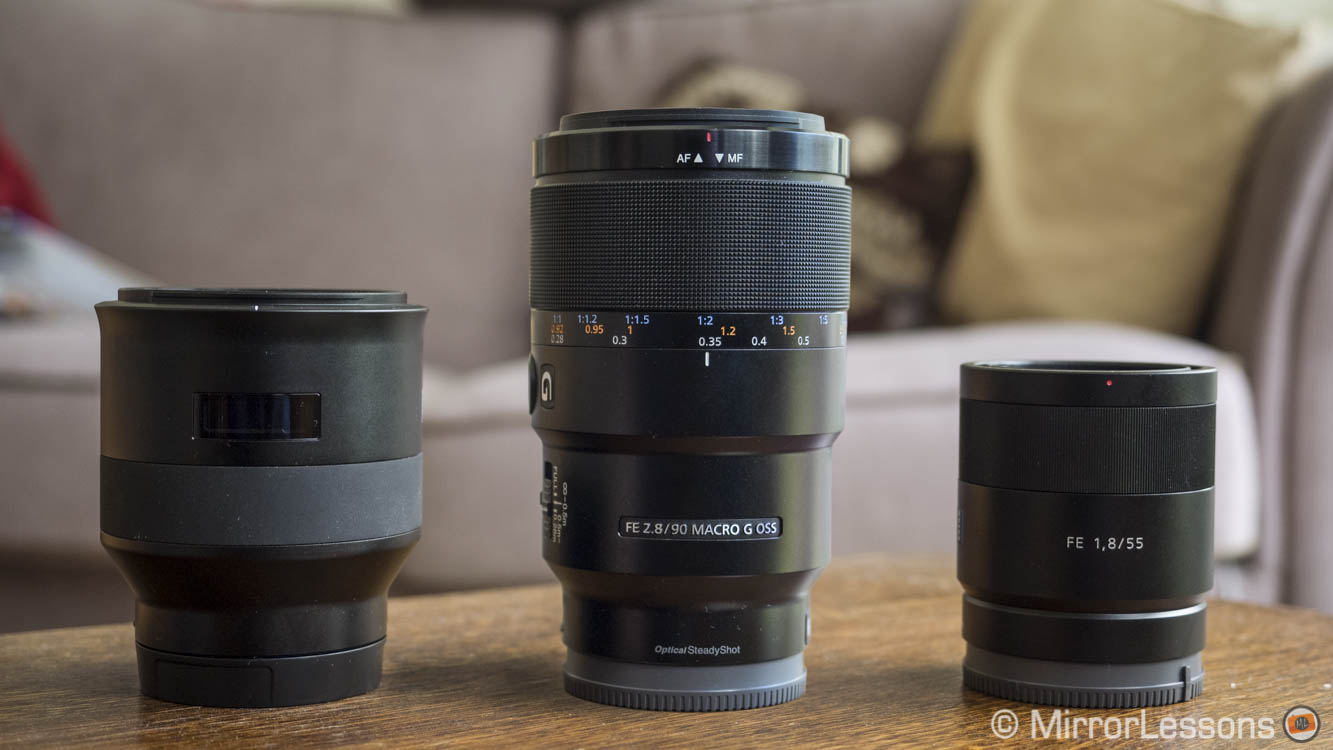 What happens when you have three interesting portrait lenses all at the same time? You do a comparison shootout of course!

At the end of last week, we received both the new Zeiss Batis 85mm and Sony 90mm macro lenses for testing. The Sony FE system is rapidly expanding, so much that we certainly can’t complain about the lack of lenses anymore. Among the focal lengths that many people were waiting for, there was a good portrait lens. Zeiss designed the 85mm (along with the 25mm f/2) to inaugurate its second family of lenses made specifically for the Sony full frame mirrorless cameras called Batis.

While I was concentrating on the 85mm f/1.8, Heather spent time with the new Sony G 90mm f/2.8 Macro. While the latter is designed primarily for small subjects and details, it proved a surprisingly good alternative for portraits as well. Then I decided to add the 55mm 1.8 to this shootout which I’ve used many times on the A7 for ambient portraits. Mounted on the a6000 and its APS-C sensor, it gives you an equivalent field of view of 82.5mm and therefore becomes an excellent choice for portraits as well.

Before proceeding further, I want to make clear that this comparison isn’t technical. In fact I can confirm the obvious to you: the best portrait lens for the Sony FE system is the new Zeiss Batis 85mm f/1.8. While I’ve only used it for the past few days and my review is still in the works, I can tell you right away that I like it a lot. It is sharp with a very nice bokeh and very natural rendering that not only Zeiss aficionados but also many portrait photographers will appreciate. That said, it is nice to see that more than one lens can serve a specific purpose in a growing system.

So enough with words: let’s compare some images!

Note: this first set of images has been post processed with Lightroom and the Rebecca Lily presets.

You will notice that the Zeiss Batis has a smoother bokeh and produces less of a “swirl” effect than the 90mm. But the latter looks good in terms of bokeh rendering too. Both are really sharp. The 55mm on the a6000 does a good job as well. It is slightly less sharp but this is also due to the lower resolution of the a6000. The bokeh is less smooth than the other two lenses but I like its rendering and it remains a more than valid choice for portraits.

Of course the Batis gives you the advantage of the 1.8 aperture as you can see below. There is some vignetting that in this case adds extra character to the image but can also be easily removed in Lightroom. As for the 55mm/a6000 combo, at 2.8 the bokeh becomes less appealing so the combo really works best at 1.8.

Let’s see a second round with more interesting elements in the background. Here we have some plants and flowers…

There is also a more interesting light with the sun trying to peek through the clouds.

Note: this second set of images has been post processed with Lightroom, Sony’s Portrait profile and basic adjustments.

Here the difference between the three lenses is a little less pronounced than the first example. The Batis still has the smoother bokeh but I find that the 90mm and 55mm defend themselves quite well. Again, the Batis at 1.8 gives you a stunning look while the 55mm/a6000 combo at 2.8 loses its appeal.

What happens if I mount the Batis and the FE 90mm macro lens on the a6000?

Well, here you get two additional portrait combinations that are worth your while. The Batis lens gives you a 127.5mm field of view while the 90mm gives you a 135mm equivalent focal length. 85mm is often referred to as the optimal focal length for portrait photography but the truth is that 135mm or something similar is also a great choice.

Of course with the A7 series you have the possibility to adapt many third party or Sony A-mount lenses so the options become almost limitless. But when reviewing cameras, I always like to analyse how the system works with its native lenses first. One year ago, I used the 55mm 1.8 and a Leica 90mm Summicron for a portrait session. Today the Batis 1.8/85 would probably be my favourite lens but I’m glad Sony users now have more choice. And if we forget side-by-side comparisons for a moment, each of these lenses when used individually can give you excellent results.

Probably one of the great and less highlighted benefits of this new full frame system is that some of these lenses can perform well on APS-C cameras too. The 55mm is a very useful focal length and a must-have if you own both Sony full frame and APS-C cameras. Sony FE is rapidly becoming the most versatile system among mirrorless cameras. The lens line-up for the APS-C cameras has always been weaker when it comes to high quality and fast prime lenses, so all these new FE lenses make the APS-C system worth the investment.

The only two limits I can think of are the size and price. Many of these new lenses aren’t very different from their DSLR equivalents in terms of size and weight which defeats the purpose of a compact system. What’s more, all these lenses are expensive. On a DSLR system, 1.8 lenses tend to be the more affordable option. In Sony’s case, the FE 55mm or the Batis 85mm 1.8 cost twice as much, if not more, than their DSLR equivalents. While we can argue about the difference in optical quality, the FE lenses in general tend to be very expensive (think about the 35mm f/2.8). I hope that in the future Sony will also release a set of fast and more affordable primes. But once again, the system is not even two years old. Let’s give it some time.

Our full review of the Zeiss Batis and 90mm macro lens will be online soon, so be sure to come back and visit us! In the meantime, here are some other image samples taken with the Batis lenses here (25mm) and here (85mm).