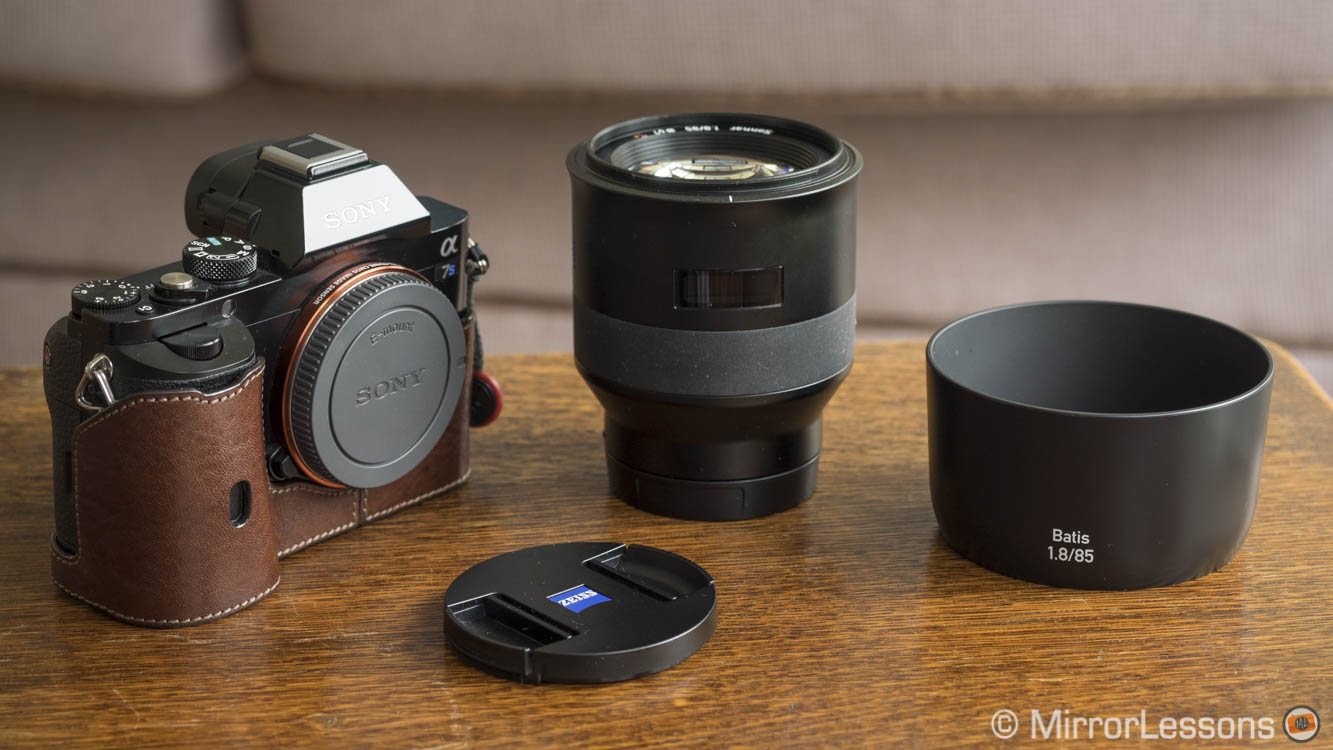 Zeiss caused quite a stir when it announced its second family of lenses designed exclusively for the Sony E-mount system. Unlike the Loxia lenses (see our review here) that are manual focus, the Zeiss Batis 85mm offers everything you would expect from a modern lens: autofocus, optical stabilisation and the world’s first digital OLED screen that replaces the classic distance scale marked on the lens.

Even more interesting is that, unlike the Loxia lenses, the new Batis family comes with two focal lengths that were missing from the E-mount line-up – 25mm and 85mm. The 85mm f/1.8 is certainly the most anticipated lens of the two because it is the first native portrait lens for the system. It is expensive and doesn’t have an f/1.4 aperture but it has been exclusively designed, produced and distributed by Zeiss.

Is the Zeiss Batis 85mm worth the money? Let’s find out!

Gear used for this review:

Below you can check out our hands-on video review of the two Batis lenses where we also show you exactly how the OLED screen works and how to select the various options.

The lens’ design stays faithful to the style introduced on the Touit (for Sony and Fujifilm APS-C mounts) and Otus families. It is simple and elegant with a dark all-metal build and a plastic lens hood that fits the form of the lens perfectly. The lens is splash and dust proof. It is not too heavy (475g) and remains balanced on the A7 body. It is also a good fit for the a6000. It is certainly not a small lens and I personally feel it represents the limit when it comes to primes for the Sony full-frame system. Anything bigger becomes less portable and diminishes the advantage of a smaller system.

Did you know that…?

Following on from the Touit, Loxia and Otus families, the Batis series is the fourth to be named after a bird species.

There aren’t any buttons or switches on the lens. The only physical control is the focusing ring that is covered with rubber. Like the Touit lenses, the rubber has a pleasant feel and can be used in very cold temperatures, as the rubber isn’t cold to the touch. On the flip side, it attracts more dust. The focus ring is of course “fly-by-wire” but it is smooth and precise to operate.

What would have been nice is an aperture ring. It is a feature photographers would have definitely appreciated.

One of the most important features is the OLED screen. As I said at the beginning, the Batis lenses are the first full-frame lenses to incorporate such technology. How does it work? Well, by default, when you work in autofocus mode, the screen remains deactivated. It is only when you turn on the camera that the Zeiss name briefly appears. 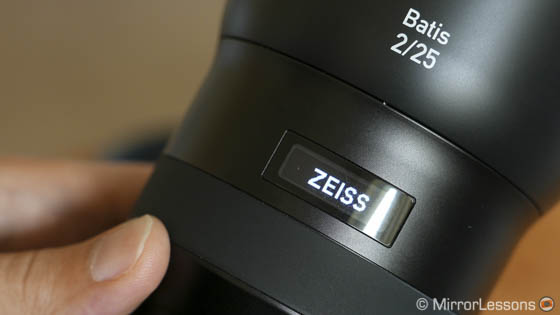 When you switch to manual focus from the camera’s quick menu or function button, the screen turns on and gives you various information. At the centre, the biggest number gives you the precise distance at which you are focusing. The smaller numbers on the left and right represent your depth of field, which varies according to your focus distance and chosen aperture. The more you close the aperture, the deeper your depth of field will be. If you are focusing at the minimum focus distance, the depth of field is only shown at the right side of the screen and is expressed in decimals.

Is the OLED screen useful? Well, to be honest I never used it on this particular lens. I used it much more on the 25mm because, being a wide angle lens, the hyperfocal scale is more useful for street or astro photography. In low light, it is certainly a nice thing to have as the information displayed is clear and bright. In sunlight however, the numbers are more difficult to read.

By default, the distance scale is expressed in metres. If you want to switch to feet, you have to rotate the ring until you reach the minimum focus distance (an arrow on the left will appear once you are at the shortest distance). Then keep rotating in the same direction for 360° and the scale will change from metres to feet. Repeat the same process to switch back to metres.

The OLED screen can be activated even in autofocus mode or turned off in manual focus mode. The process is the same as the metres/feet operation but you turn the ring in the opposite direction. So once you reach infinity (an arrow on the right will appear), keep turning the lens for 360° and an ON/OFF option will appear. Keep turning in the same direction to select ON (remains activated no matter which focus mode you selected), MF (activates only when manual focusing) or OFF (remains deactivated in both focusing modes). To validate, simply turn in the opposite direction.

Through the lens: image quality

After two weeks of use, I have come to really like the Zeiss Batis 85mm. Out of all the mirrorless options, it is becoming one of my favourite lenses for portraiture in addition to the Fujifilm X-T1/56mm combo. I really like the character the 85mm delivers and I think that Zeiss enthusiasts will surely appreciate it. It gives a very natural rendition and I never really missed a f/1.4 aperture. I am not saying this to justify the f/1.8 aperture – I simply feel that the lens delivers very high performance at f/1.8, so f/1.4 becomes an extra you don’t really need.

At f/1.8, the lens deliver excellent sharpness. This is where the bokeh is at its smoothest and creamiest and I really like the overall look the lens delivers at its fastest aperture. There is some vignetting but it can easily be removed with Lightroom or another Raw editing software.

At f/2.8, the vignetting disappears almost completely but the lens retains its character with a bokeh that remains pleasant even at f/4. The transition between the in-focus and out-of-focus areas is smooth and looks very nice. Sharpness of course increases even more. You probably can’t get better than this unless you look at the more expensive Otus lens.

The lens performs well in backlit situations as well. I didn’t find any relevant trace of chromatic aberration, not even at f/1.8. That fast aperture is also good for isolating your subject from the background even when he or she is at a distance from the camera.

I also tried the lens on the a6000. It gives you an equivalent field of view of 127.5mm which is still excellent for portraits. For those who own both full-frame and APS-C cameras from Sony, this lens definitely becomes more versatile.

While not its primary purpose, the lens also delivers great sharpness for landscapes and other purposes, not only at the centre but also in the corners.

If I wanted to be really picky, I could point out some very slight pincushion distortion, such as in the image below. But frankly, this is not something to worry about and I easily fixed it in Lightroom.

Update: the latest Lightroom (2015.1.1) and Adobe Camera Raw (9.1.1) releases include the Batis profiles. You can get rid of vignetting and pincushion distortion with one click.

I haven’t found anything to complain about when it comes to autofocus. It is fast, smooth and silent. The performance however can vary depending on the camera. For portrait sessions, I used the smallest AF point to precisely focus on the eyes of my subjects. On the A7r, I experienced a lot of back and forth movement when using that specific AF setting.  It behaved better on the A7s and a6000. During my visit to Owsestry for the food market, I took several portraits of the vendors while they were working. I had to take the shot quickly since there were lots of customers to be served so I choose the largest AF point instead and took two consecutive shots. Often the first one would be slightly blurry while the second one would be perfectly sharp. This happened on both the A7r and A7s.

While not designed primarily for action either, Heather also used the Batis 85mm with the a6000 in Continuous AF mode for some sports photography and the lens performed really well.

The 85mm also includes optical stabilisation (you turn it on or off via the Steadyshot submenu in the camera). It delivers good performance and can facilitate shooting at 1/50 or even 1/25s. For the various portraits I shot, I never used a shutter speed slower than 1/50s. For review purposes, I tested how far could I go and I managed to take sharp images at shutter speeds as slow as 1/10s with the A7r and the A7s.

The lens is designed primarily for stills but there is nothing to stop you from using it for motion images. The autofocus is less effective but this is partly due to the limited capabilities of Sony cameras in Continuous AF mode for video.

Our review of the Batis 25mm is now online. You can also check out our hands-on video review about the two lenses below.

Giving you advice about the Zeiss Batis 85mm is quite easy: for now, it is the only native portrait lens for the Sony full-frame system that has autofocus and optical stabilisation. It also happens to be an excellent performer. If you also own a Sony APS-C camera such as the a6000, you could find it useful on both systems. The optical quality is what you’d expect: excellent sharpness, beautiful bokeh, and a fast and silent autofocus mechanism.

Perhaps what we can argue about is the price. At more than $1000, it is far more expensive than the equivalent lenses for DSLR systems. 85mm f/1.8 is usually the affordable portrait lens option. The Canon version is around $400 while the Nikon is slightly more expensive. We can talk about the fact that it is made and distributed by Zeiss or that the lens might perform better than other 85mm lenses but it doesn’t eliminate the fact that it is a hefty investment.

One thing I am sure of is that sooner or later we will see an 85mm f/1.4 pop up on the lens road map. Whether it be designed by Zeiss or Sony, the only way to not kill the Batis sales is to make it even more expensive. The 35mm f/1.4 costs more than $1500 for example and that might be a ballpark range of what we should expect from a future E-mount 85mm f/1.4 lens.