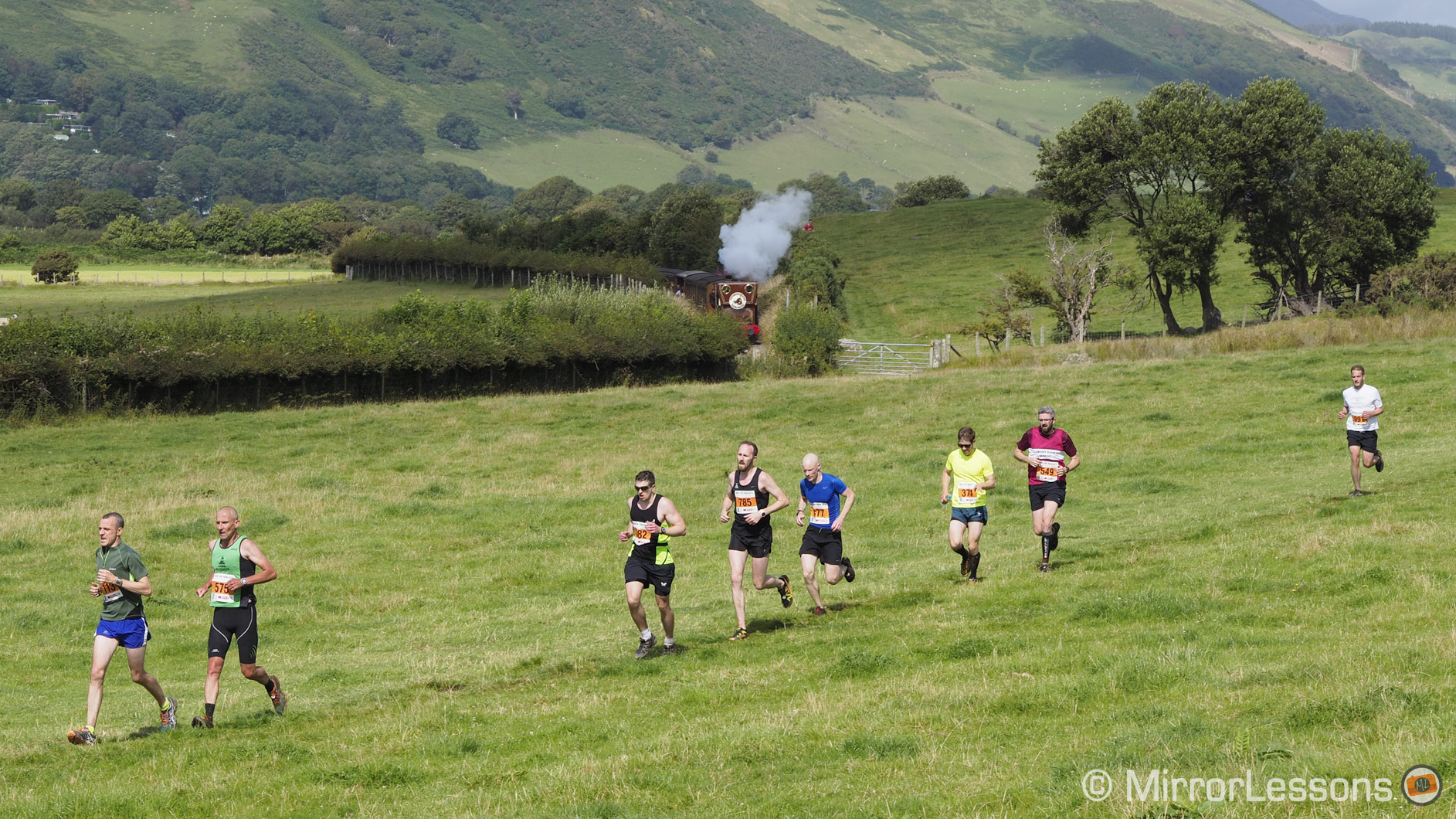 Nearly two weeks have passed since this year’s edition of the Race the Train cross country running event took place here in Wales. Every year, runners come from all over the world to compete not only against one another but also against a steam train on our beloved Talyllyn Railway. Travelling from Tywyn to Abergynolyn and back again, the distance works out to be about 23 km or 14 miles. While it is possible to beat the train back to the station, only the fittest runners ever achieve this goal.

To document the event, I had the chance to use the Olympus OM-D E-M10 II, which was sent to us for testing a couple of weeks before the official announcement. (Mathieu used the Sony A7r II with the Sigma 150-600mm lens but he’ll tell you more about that at a later date!) You can see our full review of the E-M10 here.

The E-M10 II employs the same snappy contrast-detection autofocus system as its predecessor. It has a total of 81 AF points, letting you focus on a subject anywhere in your frame using either the four-way pad or touchscreen.

Although the autofocus system remains unchanged, the burst modes have been improved. You can now shoot at 8.5fps in sequential H mode and 4fps in sequential L mode, C-AF or C-AF with tracking. Focus tracking will only work if you choose the sequential Low mode. In High mode, the focus is locked on the first frame.

Inherited from the E-M5 II is a brand new silent shutter mode in the burst menu. With it activated, you can shoot 5fps in sequential L and 11fps in sequential H. Even though it wasn’t useful for this particular event, it is a handy feature to have for quiet venues or when discretion is of the essence. Keep in mind that with very fast-moving subjects, you may encounter some rolling shutter in silent mode.

There is also a new function on the E-M10 II called AF Targetting Pad. First used on the most recent Panasonic Lumix cameras, it lets you change the AF point on the touchscreen with your thumb while looking through the viewfinder. Although it is an interesting feature, we found it somewhat imprecise. You might end up tapping the screen a few times before getting a reaction, which can be a problem if you are following fast-moving subjects. In general, we preferred using the four-way control pad with the viewfinder, or the touchscreen on its own.

In my experience, all OM-D cameras tend to focus very well in good light regardless of the AF mode, and the E-M10 II is no exception. Just as on the high-end E-M1, we’ve found that the optimal settings for moving subjects are as follows:

Armed with the wonderful M.Zuiko 75mm f/1.8, I used these exact setting during the race and ended up with very few out-of-focus shots of the runners coming towards me. I would guess that my hit rate was about 80%.

C-AF with tracking in particular was very effective, especially for the runners in brightly coloured clothing. The only time it would falter was when there were many runners bunched into the frame, sometimes causing the focus point to jump to the person behind my subject. In cases like this, it is best to switch to turn off the tracking and use C-AF and the single AF point to lock onto the subject of interest. This mode too is very fast and accurate even with moving subjects.

There was indeed something magical about watching this year’s Race the Train take place. Last year, we made the mistake of staying in the town to capture the runners’ arrival at the finish line but the backdrop of the buildings didn’t make for particularly attractive or interesting photographs. Having more knowledge of the area this time around, we decided to walk out to the fields where we were greeted with a fabulous view of the rolling hills, a small section of the train track and a “rainbow” of over 1000 runners that stretched as far as the eye could see.

According to other photographers who were at the race, had we gone along even further, we would have had an excellent view of the train steaming along beside the runners. I suppose we’ll have to make note of that for 2016!

Want to learn more about the OM-D E-M10 II? Be sure to check out our full review!