You are here: Home / Galleries / Photographing the Super “Blood” Moon Lunar Eclipse with the Panasonic GX8 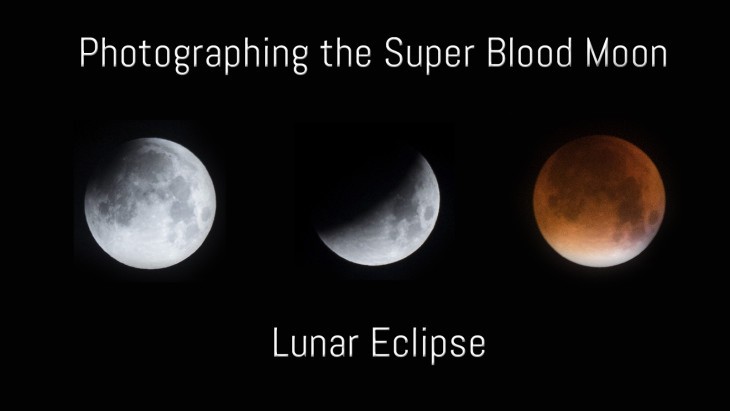 Last night, we and the rest of the world were witnesses to an event that only happens a few times per century, a super blood moon lunar eclipse. To give you an idea of the infrequency of this event, the last one happened before Mathieu and I were born and the next one won’t happen until 2033!

During a super blood moon lunar eclipse, the moon is at the place in its orbit where it’s closest to earth, and appears 14% larger and 30% brighter than usual. The reason it is called a “blood moon” is because at the height of the eclipse, the moon takes on a deep red hue caused by the sun’s rays being reflected onto its surface.

As it took on a crescent shape, we had to raise the ISO to 800. Anything beyond this resulted in an unacceptable deterioration in detail on the moon’s surface.

By the time the earth’s shadow had completely enshrouded the moon, we had to switch to the 35-100mm to take advantage of its f/2.8 aperture. To capture as much detail as possible, we kept the ISO at 800 and reduced the shutter speed to 0.4s.

Knowing that the Panasonic GX8 has a 20MP sensor, we felt comfortable cropping the images in post production to centre the moon and eliminate the excess space around it.

Below you can find a composite of the moon as it transitions through the first half of the eclipse.

We also made good use of the GX8’s 4K Photo feature by taking a very basic 4K video clip from which we extracted an 8MP JPG. I was pleased to see how well the Vivid profile brought out the deep reds of the moon as it reached totality.

Did you manage to shoot the lunar eclipse? If so, please feel free to share your experience below!