You are here: Home / Comparisons / Sony A7r II vs A7s II: which one is better for video? 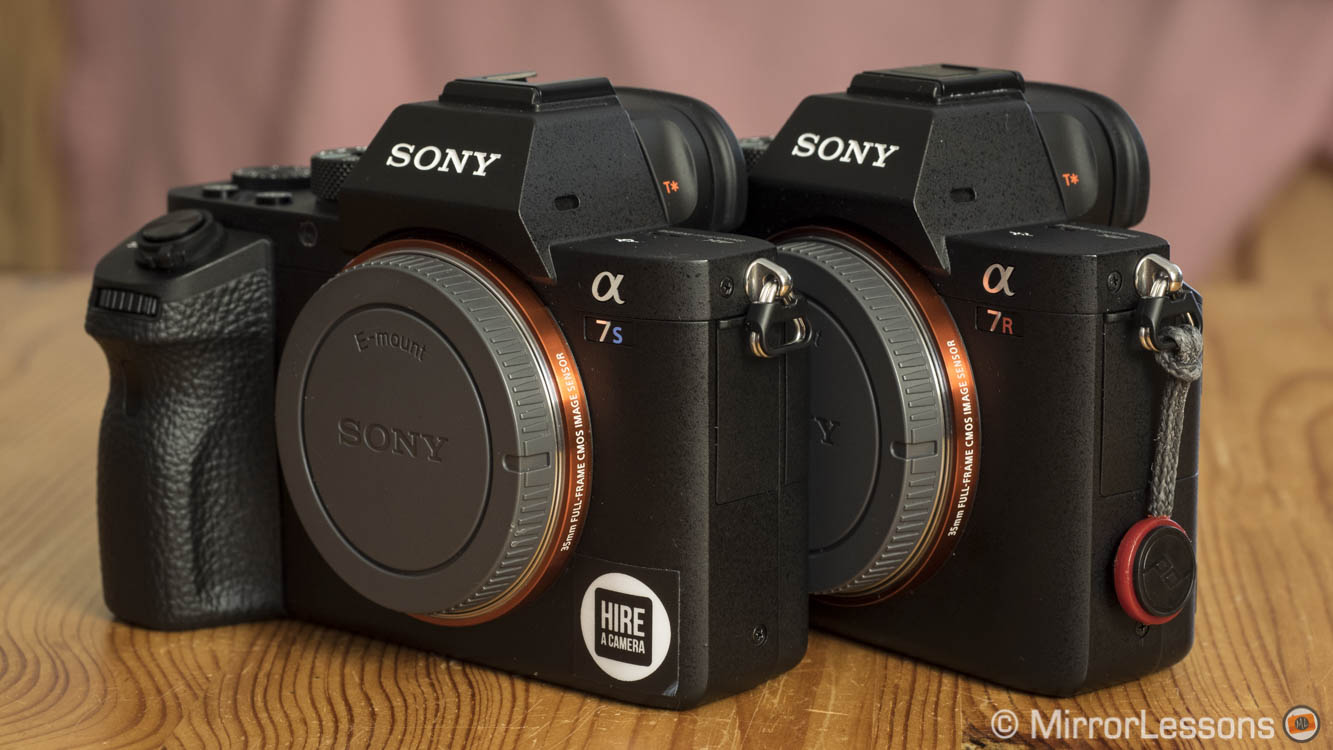 When Sony released the Sony A7r mark II, they made sure to give the camera not only impressive still capabilities but also advanced video recording. It is hard to beat this product when it comes to specifications: it has a new 42MP chip (the world’s first BSI 35mm sensor) and full pixel readout in 4K when using the APS-C/Super35 mode. Indeed, it comes across as the perfect hybrid camera if you want the ultimate image quality for still images and 4K video.

However, within the A7 line-up, there is also the video-oriented Sony A7s II, the successor to the A7s. It has a 12MP sensor that is designed more for video use and has better low-light capabilities than any other A7 series camera.

Since both the A7r II and A7s II have great video capabilities, it is natural to wonder:

How does the A7r II compare to the A7s II for video? Is there really a noticeable difference? Let’s check it out!

Below you can find a comparison video available in 4K where I summarise all the major differences between the two cameras for movie recording. Some of these differences are also described in detail further down.

Concerning the design and handling, both cameras look like twins but more importantly, they both have the classic digital camera design. Advanced filmmakers should definitely consider rigs and other accessories to make the shooting experience more comfortable.

Both cameras have a microphone input (3.5mm jack) and a headphone output. The HDMI port delivers a 4:2:2 8bit signal for monitoring or to use on an external recorder with less compression than the internal codec. The internal recording time is limited to 30 minutes.

A cable protector is included in the box and can be easily attached to the connector ports on the side of the camera. It is helpful to protect the HDMI and Mic ports and prevent them from accidentally disconnecting or breaking. The original A7s had a similar tool but is designed differently. The new one works better.

The A7s II can shoot 4K internally with the X-AVC S codec up to 30fps. It can record up to 120fps in Full HD although the latter crops the sensor a little. The camera includes the S-log2 and the new S-log3 gamma profiles. It has been designed to give the best performance in full-frame mode. Thanks to the lower megapixel count (12MP), it can do a full pixel readout without pixel binning on the entire sensor surface and therefore avoids aliasing and moiré.

The A7r II can shoot 4K internally up to 30fps as well. The Full HD recording goes up to only 60fps while 120fps is possible in 720p. It features the S-log2 gamma profile. One important note is that the A7r II gives the best performance in Super35/APS-C crop. The camera uses a lower megapixel count (around 18MP) and is able to perform full pixel readout without pixel binning.

In good light and at low ISOs, you won’t notice a big difference between the two cameras and the A7r II performs well in full-frame mode as well. At high ISOs, however, the A7r II has less noise in S35 mode. As for rolling shutter, the performance of the A7r II is worse in S35 mode.

Below you can see the difference in ISO performance of the A7r II between the full frame and Super 35 modes.

Both cameras can record at a maximum bitrate of 100mbps for both 4K and Full HD formats. While for the latter it is an excellent compression, for 4K it is not a lot. However the XAVC S codec is excellent and I haven’t noticed any strange artefacts in the footage.

At low ISOs, you will notice a slightly different colour rendition, with the A7s II having a more yellow tint than the A7r II.

Both cameras include the movie picture profiles that Sony first implemented on the A7s. They come from Sony’s Cinealta series of professional digital cinema cameras, and allow you to change various settings including black levels, black gamma, gamma, knee, color mode, saturation, color phase, color depth and detail. These settings are more advanced that the ones found in the Creative Styles settings (color profiles for stills).

The A7s II features two S-log profiles that allow you to record the widest dynamic range possible and color grade in post production. When selected, the minimum ISO becomes 1600. The camera includes the new S-log3 profile that gives more dynamic range and an even flat rendering. However it also produces more noise in the shadows and that can become annoying in low-light. The results really depend on how you plan to apply the LUT profile in post and how you intend to grade the footage.

The A7r II only features S-log2 and the lowest ISO available is 800.

Note: with the original firmware, the A7s II had an issue concerning S-log2 and S-log3: if you included the sun or any other very bright light source in the composition, a black spot would appear in both 4K and Full HD footage. Sony released a firmware update (1.10) that fixed the black spot issue.

Despite the excellent quality you can get with the S-log profiles, I still prefer to use a custom picture profile made with other settings. The internal recording is compressed with a 4:2:0 colour sampling and I prefer to have an image that already looks good and needs only a few adjustments. You can already record a vast dynamic range by using the Cine1 or Cine4 gamma. I would use the S-log option only if I were recording on an external recorder via the HDMI 4:2:2 output.

Below you can watch a video recorded with the A7s II by using the picture profiles. They give you a good result straight out of camera.

At high ISOs, the A7s mark II has a clear advantage past ISO 3200. The high megapixel count of the A7r II starts to become visible especially in full-frame mode. In Super35 mode however the A7r II performs well up to 6400. After that the A7s II clearly becomes superior. Its footage in 4K looks really clear up to 25600 and I had to push it to 80000 to start seeing a lot of noise.

Both cameras can also shoot in Full HD and HD ready (720p). The A7s II has the advantage of slow motion capabilities in 1080p while the A7r II can only do it at 720p. The highest frame rate is 120fps (NTSC mode). The quality however is not as stunning as the 4K footage. This really shows that the two cameras have been designed primarily for 4K video. Especially at high ISOs you will find more visible colour noise in comparison to the 4K footage.

Concerning slow motion, the A7s II has an extra mode called HFR and it can save the video file already conformed to 25 or 30fps so that you don’t need to slow it down in post-production. However in HFR mode the files are saved at a lower bitrate (16mbps) so I advise that you use the normal movie mode to record the movie clips at 100mbps and slow them down in post production.

Concerning the autofocus capabilities, I found that the A7r mark II was clearly superior even in low light.

I was expecting something more from the A7s II given its great low-light sensitivity (-4Ev) and the way in which Sony promoted this great sensitivity for video recording as well.

The two AF systems are different and this explains the discrepancy between the two. The A7r II has a hybrid autofocus system with 25 contrast and 399 phase detection points while the A7s has a contrast detection AF system with 169 points.

Professional filmmakers would probably use manual focus when shooting with these cameras but I was curious to see the how the performance was in Continuous AF. The A7r II tracks faster and is more accurate. The A7s II is slower and may end up focusing on the background instead of the subject even when using the small or medium flexible spot. You can see some examples in the embedded video at the beginning.

Sony implemented 5-axis sensor stabilisation on all the mark II models. For video the performance is not as good as for stills. The best results are achieved with fixed shots where shake compensation is good. However when walking or doing more complex movements hand-held, the results are not exceptional. Both cameras perform the same way regarding stabilisation for video but the A7r II seems slightly better at times. Here again you can see some examples in the embedded video at the beginning.

In the end, the truth is that both cameras can deliver excellent 4K video.

It is true that the A7s II has been designed specifically for video and its low-light performance are the best you can find in the market. However the A7r II can be almost as good in most situations and has a faster AF. Personally, I would advise the following:

Choose the Sony A7s II for video if:

Choose the Sony A7r II for video if:

If you had to choose between the A7rII and A7sII for video, which would you choose? Let us know in the comments section!