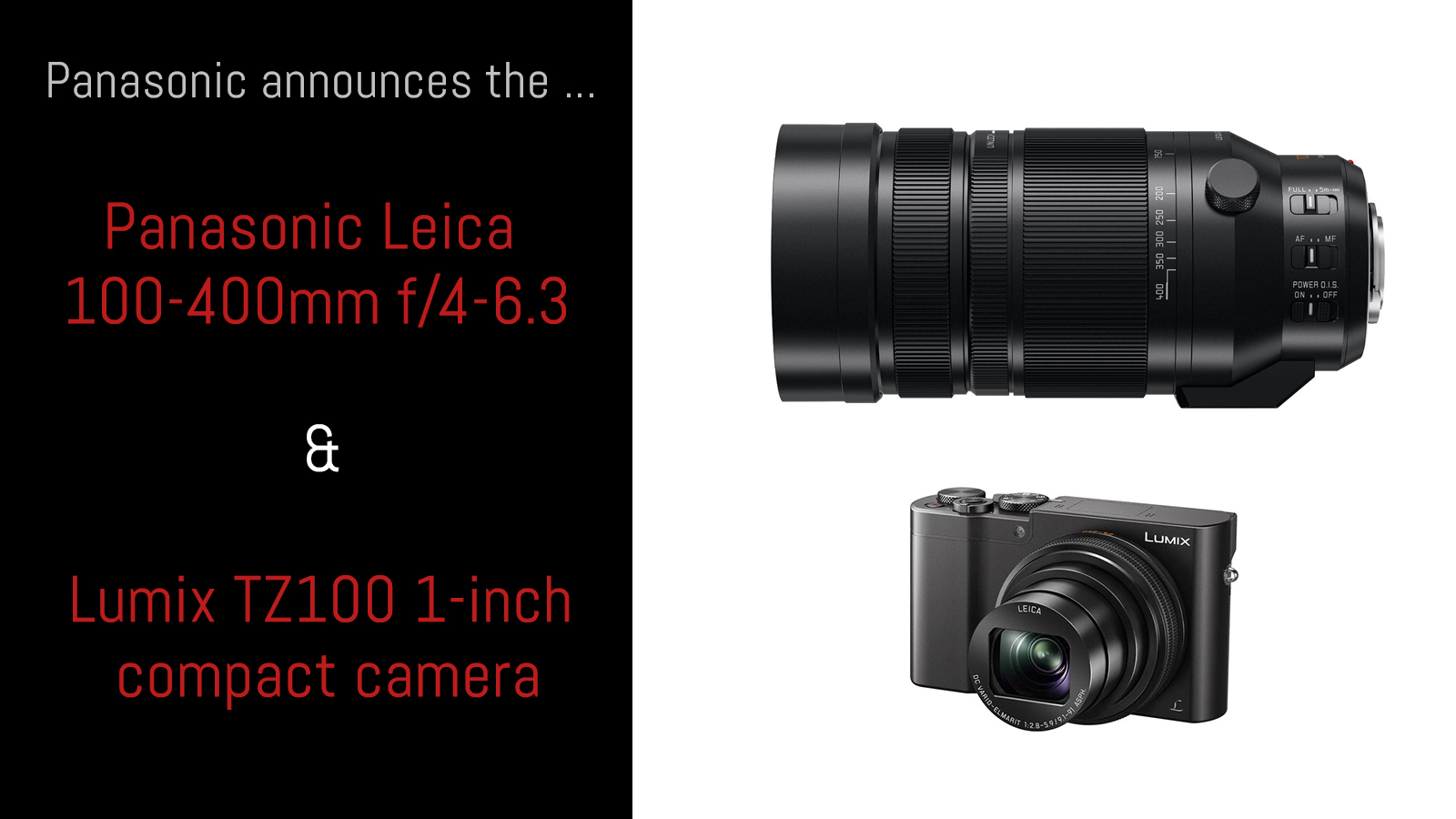 Today at CES 2016, Panasonic announced two new products that have ties to the mirrorless segment. On one hand, we have the Panasonic Leica 100-400mm f/4-6.3, the first of many mirrorless extreme telephoto zooms expected this year. On the other, there is the Panasonic Lumix TZ100 (otherwise known as the ZS100 in the US), a new arrival in the 1-inch compact camera arena and competitor for the likes of the Sony RX100 series and the Canon G7x.

It is fair to say that 2016 is shaping up to be the year of the extreme telephoto lens, at least as far as the mirrorless world is concerned. The Panasonic Leica 100-400mm (200-800mm equivalent on full-frame) is the first to be made official, providing the longest focal length the Micro Four Thirds world has seen thus far.

Of course, having such a long telephoto range doesn’t come without its caveats. You are confined to an aperture range of f/4-6.3, which is fine for daylight shooting but may prove limiting in low-light if you are shooting fast-moving subjects.

The lens has 20 elements in 13 groups, a 72mm filter and is 100% weather sealed, making it a good match for professional bodies like the GH4 or GX8. It has an excellent close-focusing distance of 1.3m and since it incorporates Panasonic’s Power Optical Image Stabilisation, it is also compatible with the GX8’s Dual I.S. system. According to the press release, the lens is fast and silent thanks to its high speed and precise 240 fps AF-motor.

Being a professional telephoto zoom, it is also one of the largest and heaviest Micro Four Thirds lenses on the market today, weighing 985 grams and measuring 172mm in length and 83mm in width. It comes with a compact, two-part tripod mount that enables faster conversion between landscape and portrait orientation and an integrated hide-away hood. It will cost just under $1,800.

Since Sony first released the first RX100, 1-inch sensor compacts have become all the rage because they provide exceptional image quality in a very pocketable package. Up until last year, only two companies had ventured into the 1-inch compact realm – Sony, which amplified its RX100 line to include four cameras and Canon with its G7x, G5x and G9x. Now, to ring in 2016, Panasonic has joined the party with the Lumix TZ100 (otherwise known as the ZS100 in the US).

Since we are talking about Panasonic, it is unsurprising that the ability to record in 4K has trickled down to the TZ100. Not only can you shoot 4K video, but you also get 4K Photo and Post Focus, both of which are found on Panasonic’s high end models. Other significant features include a (fixed) touchscreen, WiFi capabilities, and an electronic viewfinder.

Are you interested in either of these Panasonic products? Tell us why (or why not) below!