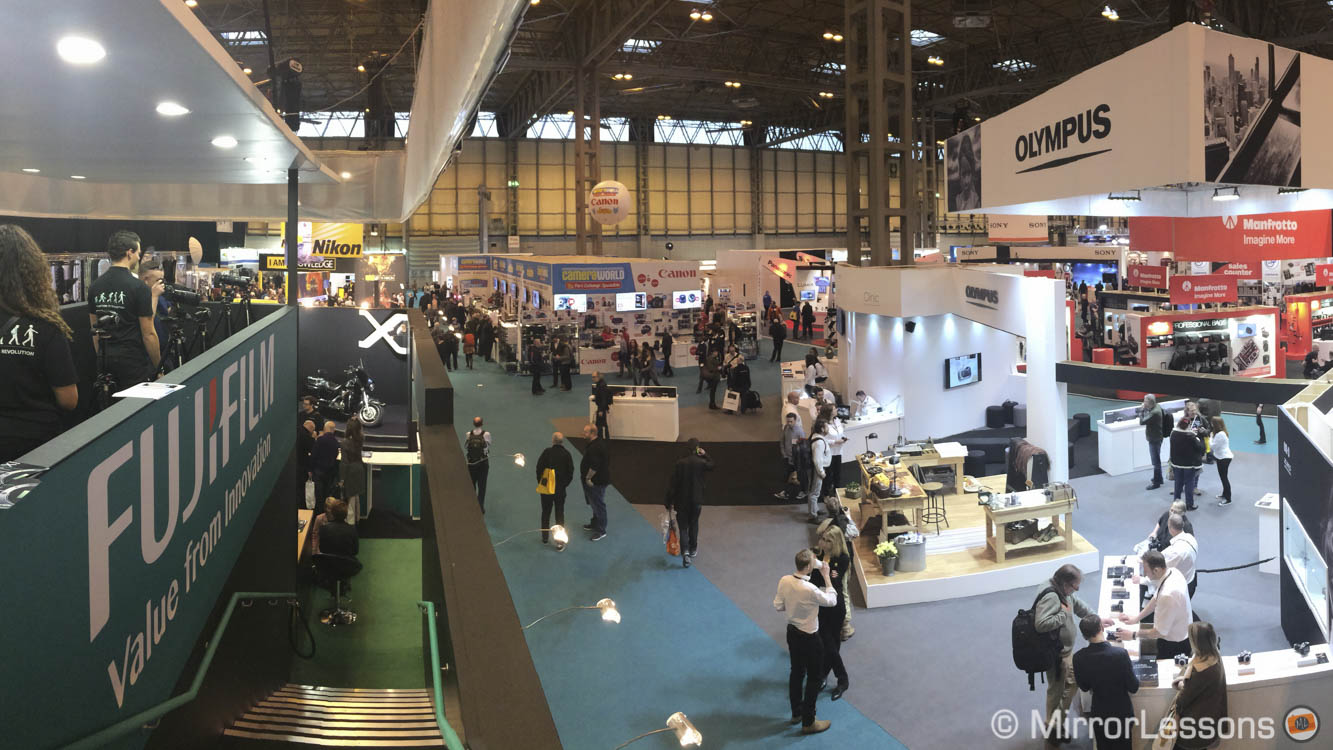 On Sunday and Monday, we had a very enjoyable time browsing around The Photography Show in Birmingham and had the opportunity to see many of the new products announced over the past few months. As is common with these kinds of shows, there isn’t much you can do with the gear since there isn’t a lot to photograph and some of the products were either mock-ups or pre-production samples.

Instead of writing separate posts, we thought it would be more interesting to share a round-up of the most interesting products accompanied by a few first impressions. We will test most of them in the coming months.

The lens is manual focus. It has full mechanical rings but doesn’t include electronic contacts so EXIF data can’t be recorded. The rings are nice and smooth. In addition to the focus and aperture ring (clicking type), there is a third ring that controls a second iris diaphragm. That’s right: the lens has two iris mechanisms.

The first is controlled by the f/stop aperture ring (f/2 to f/22). The iris has 8 blades and is useful as a traditional aperture ring to control depth of field and work with the effective f-number.

The second iris (controlled by the non-clicking T-stop ring at the centre) is useful for videographers who prefer to work in T-stops (real light transmittance of the lens). This second iris has 14 blades to produce a better bokeh. The latter is also enhanced by an apodization element inside the lens.

As you can see from the sample image below, the bokeh looks quite promising. The sharpness at f/2 is not bad either.

We made a quick stop at the Leica booth to see the new “monstrous” 90-280mm f/2.8-4 telephoto lens for the SL system. As you can see from the images, it is large and believe me, it is heavy (almost 2kg)!

As usual, the build quality is excellent. The sharpness at 90mm seems excellent but I wasn’t impressed by the optical stabilization at the longest focal length. However the shooting conditions weren’t ideal either: the camera/lens combo was securely connected to the desk with a cord and I couldn’t lift the camera to the desired height (I’m tall which doesn’t help). The camera’s AF wasn’t always accurate either.

At the Panasonic booth we had a play with the new 12-60mm f/3.5-5.6 lens that will be available on its own and as a kit with selected cameras like the GX8 and G7. The lens is small, light and fits cameras like the GX8 perfectly. It features Power O.I.S. and is compatible with Dual IS on the GX8. The AF motor is fast on the GX8.

Panasonic’s booth was one of the most dynamic of the entire show and all the Lumix ambassadors were there for the four days to provide personal insight and assistance. It’s definitely the booth where we spent the most time chatting with people!

I also had the chance to check another pre-production sample of the 100-400mm. Unfortunately there weren’t any final versions but the one I tried has a better zoom ring than the one I tested on MirrorLessons.

There were lots of new products to check out at the Sigma booth and it’s always a pleasure to meet the lovely and enthusiastic UK team. We had a look at the new SD Quattro H camera (Foveon sensor) but unfortunately it was only a prototype that couldn’t be powered on. The camera is lighter than I would have thought but I can’t really add any more insight unfortunately. It won’t be available for a long time (probably the end of the year).

We saw a non-working prototype of the 50-100mm f/1.8 APS-C lens. It is designed for DSLRs but I am curious to test it on the a6300 with the adapter. The lens is not too large considering the fast constant aperture but it is bulky and heavy.

I briefly tested the MC-11 adapter too but it is a pre-production model. The performance was slower on the a6300 but much faster on the A7 II. The final version should work fine on both cameras and we will test it on the A7r II as well. I really like the build quality of this adapter – it might be the best I’ve seen yet. As reported by DPreview already, the adapter also allows you to use AF functions that are unavailable with other adapters such as Zone AF and Lock-On AF.

I can also clarify some of the information found on Sigma’s website about this new adapter, where it is stated that Continuous AF is not compatible. Sigma doesn’t officially state full compatibility (Canon EF lenses included) because performance can vary depending on the lens used. However in the real world it should prove more than reliable. I guess it’s up to the reviewers to find out how far this new adapter can be pushed in C-AF and with Canon lenses in comparison to other products such as the Metabones mark IV.

We then took a few shots with the new 30mm f/1.4 contemporary lens on the Sony a6300 The performance at 1.4 seems promising as far as sharpness and bokeh are concerned. The AF was very fast on the a6300. The lens will also be available for Micro Four Thirds.

Finally, we had a look at two of the three Voigtländer E-mount lenses: the 10mm f/5.6 and the 15mm f/5.6 III. As with the VM lenses, the all-metal construction and mechanic rings are excellent. You can also de-click the aperture ring with a third ring that needs to be unlocked and turned 180° (like the Voigtländer m4/3 lenses).

The 10mm is the world’s widest rectilinear wide-angle lens designed for full-frame sensors. The sharpness of the lens seems very promising. The lenses have electronic contacts and the camera can record full EXIF data from the lens.

With both lenses we had time to walk around the show for a couple of minutes to get more samples. You can notice some chromatic aberration in some images and some loss in sharpness at the corners but overall both lenses seem to perform well.

Is there anything here that interests you in particular? Let us know in the comments section below!