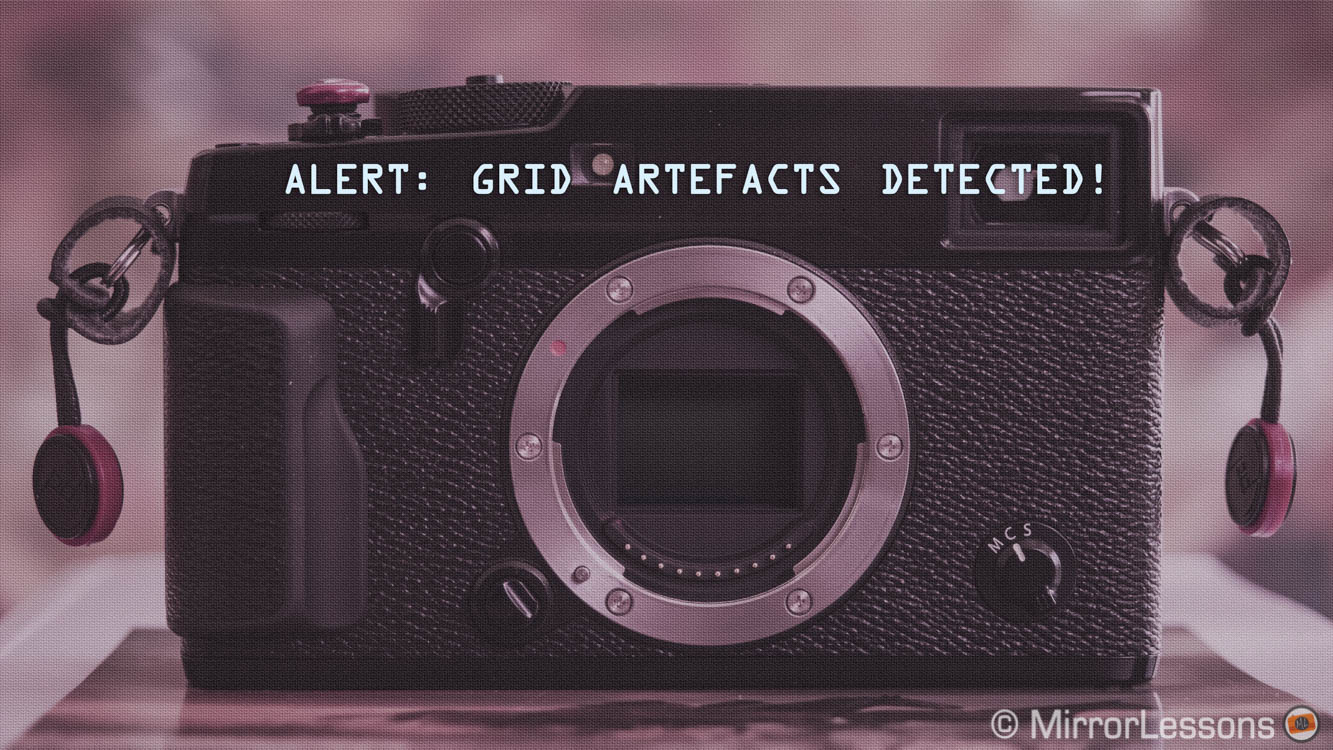 The X-Pro2 is a camera with lots of positive characteristics but more importantly, it is a relevant upgrade, taking Fujifilm’s mirrorless system to the next level alongside the recently announced X-T2. However, no camera is perfect and sometimes certain flaws can cause more irritation than others.

Update I (October 2016): the X-T2 has the same issue which doesn’t surprise me (same sensor). An example has been included at the end of the article.

Update II (June 2017): my copy of the X-T20 doesn’t seem to suffer from the same issue, despite having the same sensor as the X-Pro2/X-T2. This might suggest that Fujifilm is fixing the problem.

In the past we shared our findings about the sensor ghost flares of the first generation Sony A7. This time I want to talk about a problem related to the X-Pro2 that I already mentioned in my in-depth review: grid artefacts. Since I keep seeing this topic appear in Facebook groups and on forums, I thought that a dedicated article could be of help.

Before proceeding any further, there are three important things I want to highlight:

When shooting in a backlit situation you can encounter a purple veiling flare. This type of flare is not uncommon and I’ve seen it from other mirrorless systems, Micro Four Thirds being the most relevant example. However in the case of the X-Pro2 a grid artefact is also visible in the image. Depending on how strong the purple flare is, the visibility of the grid can increase or decrease.

What is causing the purple flare and grid artefacts?

A flare occurs when a bright source of light reflects and bounces onto the various glass elements inside the barrel. It is a natural characteristic of a photography lens and can appear in different forms (veiling, ghost) and different colours (green, purple, rainbow). Some lenses are affected more than others and this is mainly related to the manufacturer’s ability to reduce flares by using special glass and coatings. The latter has different names depending on the specific brand (T* coating for Zeiss, Nano GI for Fujifilm, etc.).

Veiling flare, which is what you see in the two images above, usually occurs when the source of light is outside your frame but close enough to reach the front element of your lens. A hood can help but depending on its size, the angle of the light source and your shooting position, it might not be enough.

Based on my research, the purple colour of the veiling flare is not caused by the lens itself but by the micro lenses on the sensor. Since all digital cameras have sensors with micro lenses, it is clear that some chips are more prone to reflections than others.

Sensor flares are not uncommon: the light reflects from the image sensor to the lens and back to the sensor again. Basically the camera sees and records a reflection of a portion of its own imaging sensor. Usually this type of flare can be identified with green and red dots appearing in your image (it is also called red dot flare) when a source of light is in the composition.

So what about this grid artefact pattern? Well, the purple colour tells us that the flare is not just caused by the lens but also the sensor. This helps us identify the problem: it is another type of reflection from the sensor that is different and more subtle than the classic sensor red dot flare we just saw above.

In this case, it is probably related to the unique pattern produced by Fujifilm’s X-Trans technology. So I asked myself: would this happen with the X-T1 and its 16 MP X-Trans II sensor? I ran a side-by-side test using the XF 35mm 1.4 and the difference is noticeable: I had a hard time finding any purple flare with the X-T1 while with the X-Pro2 they were much more prone to appear. It seems that the problem is specifically related to the new 24MP X-Trans III sensor.

However, during my various attempts to find a purple flare using the X-T1, I did come across to a very subtle one (almost blinding myself in the process!). If I enlarge it there are some traces of a similar grid pattern. This seems to confirm that the problem is related to the X-Trans pixel array but in the case of the X-T1, the issue is far less annoying and can be easily filed into the “irrelevant” folder.

The work-around: it’s basic yet effective!

Purple flares are annoying and difficult to minimise afterwards. With a little bit of post-production, you can correct the colour but the veiling effect is still there. Plus in the case of the X-Pro2, correcting the colour in post won’t eliminate the grid artefact.

The solution is to avoid the purple flare by slightly adjusting your composition (and I mean “slightly” in its purest definition).

Let’s analyse the same example seen at the beginning. You can notice that by varying my composition just a little, which involved tilting down the camera and standing a little higher (a few millimetres really), the purple flare disappears and so does the grid artefact.

This solution might seem primitive but if you follow my reasoning, you can understand how it can help in many situations. I explained before that the purple colour and grid artefacts are linked because they are both the result of a reflection from the sensor.

This particular purple flare can be easily seen live in the electronic viewfinder while you are composing your image. So if the purple flare appears, use it as a notification alert for the grid artefacts. Actually, in a few situations, I saw the grid pattern inside the EVF itself.

The artefacts will appear in the OOC JPGs too so you can also double check your results straight after taking the shot.

Of course this solution is not a permanent fix because we are talking about a hardware issue but since it involves such little effort from the photographer, I think it is worth explaining and can be useful for someone lacking experience. 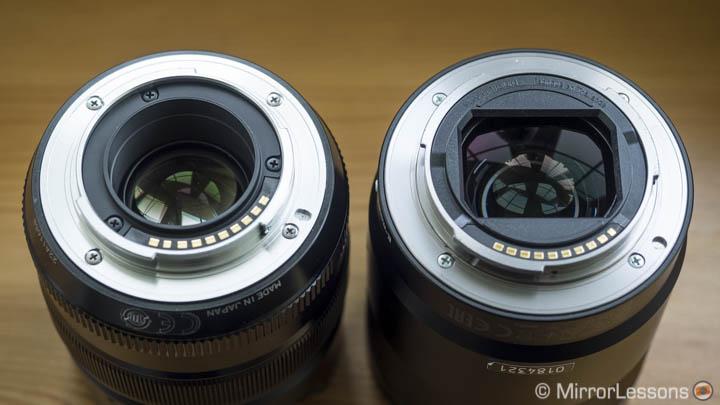 The rear element theory doesn’t work also because I detected the grid artefacts with various lenses like the Fujinon 90mm f/2, the Samyang 50mm f/1.2 and even the XF 100-400mm. The last example is the perfect proof since it can house the 1.4x and 2.x TC (teleconverter) on the rear. However I don’t deny the possibility that the problem can be more present with some lenses than others (depending on how strong the veiling flare is).

Double check: does the grid artefact appear in “non-purple” zones as well?

I analysed all the images I took in backlit situations and the answer would be no: the only time I can clearly see it is in a purple zone. Actually I have a pretty clear example below: here we have green and purple flares but the grid is mainly visible in the purple area.

The only time I saw the grid artefacts in a non-purple zone was in the image below. You can notice it slightly in the veiling flare at the top right. The flare has a very subtle warm tint but I am not sure I can classify it as a purple flare.

This shows that there isn’t a definitive answer but purple flares are the main reason I’ve encounter so far for the appearance of these grid artefacts. For example, in this other image below, there is veiling flare but no grid artifacts whatsoever.

What about the X-T2? It’s the same thing.

Since publishing this article, I’ve received several questions about the X-T2 and the possibility of it being affected by the same problem. Now that I’m back from Photokina, I’ve finally started to review the X-T2 and I can confirm the presence of the same purple flare/grid artefact, as you can see in the example below. The same suggestions and tips mentioned above for the X-Pro2 also apply to the X-T2.

What about the X-T20? It’s much better, at least on my copy!

We recently purchased the X-T20 to conduct our full review and comparisons. I compared it side-by-side with our X-T2 to see if the infamous purple flare/grid artefacts would appear and to my surprise, they didn’t. The X-T20 doesn’t seem to have any serious purple flare and I could only spot the grid in very limited zones of select images. It looks like Fujifilm is fixing the problem on this camera which hopefully means they are doing the same for the new flagship models that come out of the factory.

Conclusion: should you be concerned?

When a flaw is found on a new camera, the issue can easily be blown out of proportion, sometimes rightfully, sometimes not. The truth is that we all react differently to these problems, mainly because it depends on how much the issue affects our shooting. Personally, I started to investigate the problem after reading a complaint in a Facebook group, which proves that I didn’t notice it at first.

It is clear that the sensor has an issue with backlit images. I’ve seen purple flares from other cameras but not the grid artefact. If backlit shots play a big role in your photography style, I can understand that you might have some doubts about cameras that present a weakness in a specific shooting condition you like so much.

You may also be uncomfortable because the cameras can’t be completely trusted. I would also add that it depends on how much you post-process your images and how large you print. In some cases, the grid won’t catch your eye while in others it can be more distracting. But remember that most of the time, you need to pixel peep to clearly see it. And in this case, there is the effortless solution that I described above and that will work in most cases. It is a matter of assessing the problem, finding a work-around and trying the shot again to see if that work-around is good enough for you or not.

As a final note, I don’t think there can be a software fix since it is a hardware problem. But my positive results taken with the X-T20 suggests that the company is addressing the issue although no official statement has been made.