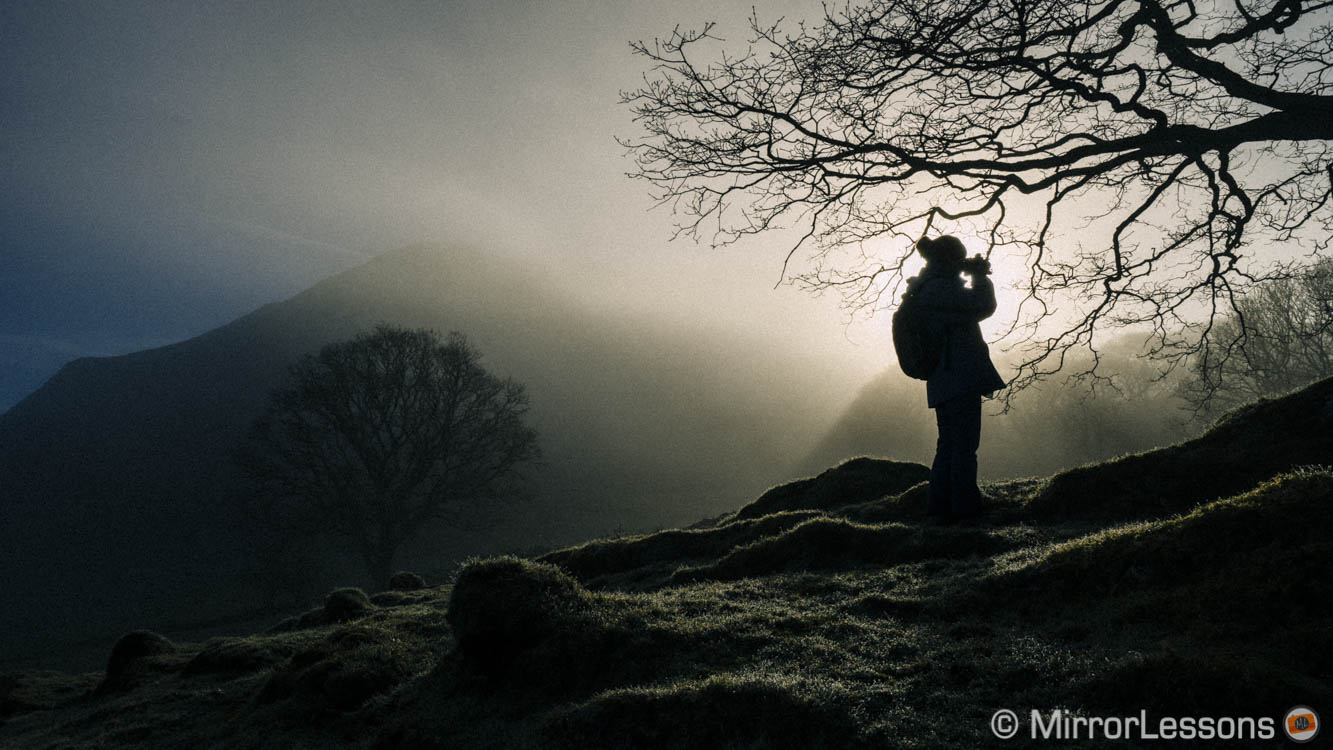 Presets can be a very powerful tool when they are done right. Some are designed to give your image a vibrant result straight away, saving you from making the adjustments yourself. Others are meant to produce a unique look. The latter is my favourite and I am going to explain why.

In the past, I reviewed the Rebecca Lily presets (version 2 and version 3). I’ve used them on many occasions for both personal and professional work. I like these presets not just because they emulate the look of film but also because they deliver a different result than the default colour or monochrome profiles you can find on most digital cameras. I could call this an “organic look” but it’s the subtle and delicate colour palette rather than the so-called film simulation that interests me. These palettes can help you to define a precise style for a specific photo project or your overall style as a photographer.

It was with this same principle in mind that I started to test RNI’s (Really Nice Images) latest film presets called All Films 4. My plan isn’t to tell you how accurate the film simulations are, first because I don’t have enough experience with film to be the judge of that and second, because I believe that if you really want the look of film, there is no better way to shoot than with an actual film camera. As Olly Janssen from RNI explains:

Our goal is not replacing film with a digital substitution, which is nonsense. We offer a digital tool inspired and empowered by film. The tool that improves digital workflow and allows to bring emotional essence to one’s photographs quickly and easily.

So my main interest was to see if these presets could be integrated into my daily workflow whenever I wanted to get away from the default camera profiles of the many digital cameras I review.

RNI is an art and technology company based in London. They design both Lightroom presets and photography apps for mobile devices. The All Films 4 are inspired by real film: the same subject is shot on film and digital side-by-side. Then the company uses its technology and experience to reproduce an accurate match. For films that are no longer available, they acquire negatives, slides and prints from private collectors and use them as a reference to simulate the same look.

The presets are organised into 5 main categories: Black and White, Instant, Negative, Slide and Vintage. Each preset take its name from the original film it is based upon. 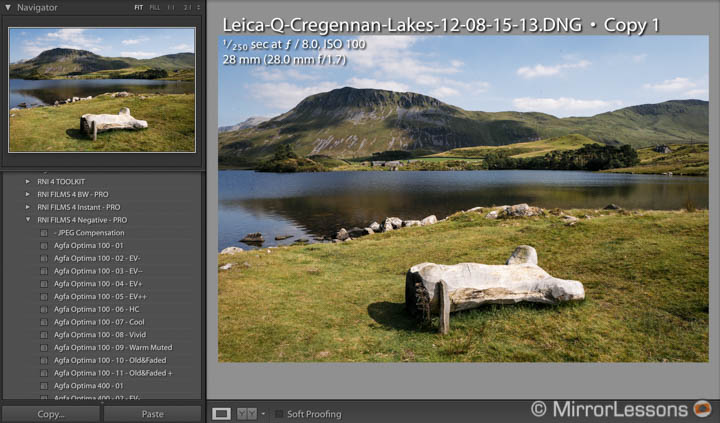 All Films 4 is available in two versions: Lite and Pro. The former costs $50 and has 43 presets while the Pro version costs $122 and has 69 presets. Note that by presets I mean a single film simulation. For each of them you will find different variations depending on the contrast, exposure and other effects. So the total count is even higher than that.

Those unfamiliar with all the different types of film may find the selection overwhelming at first. If this is the case, I would recommend starting with the Lite version.

Even with “just” 43 presets, it takes time to go through all of them, find those you like the most or those that look better matched with a particular scene. You can see a complete list of all the films available for each edition on the RNI website.

In addition to the presets, you will also find a Toolkit folder with various settings to enhance or reduce grain, fade, contrast, vignetting, etc. They are meant to be used in addition to the main presets to refine the look. Some of them can drastically change the original look of the preset. The setting I use the most is “Grain – None”. I might like the color palette of the presets but I don’t always want grain in my images.

For each folder there is also a setting called JPG compensation. It is meant to be used before applying the preset if you want to post-process a JPG file. It helps to balance brightness and contrast.

Finally you will also find two customised camera profiles (RNI Films 4.0 and 4.0.3). They will be selected automatically when you apply one of the presets (they are not meant to be used alone). The profiles support all the RAW files of the mirrorless cameras I used during my review.

I have to say that all the presets adapted very well to the images I used and their original exposure. I never had to deal with excessively blown highlights or clipped shadows unless the presets were designed that way. Many of them work well in high contrast images like sunset shots too.

The black and white folder contains 13 film simulations (9 in the Lite version), each one with multiple versions that have either more or less fade, contrast or grain for a total of 50 B&W presets.

As you might expect, some have more contrast, others will smooth details or skin tones, and others still will preserve or blow more highlights. It is hard to say which one works best for certain genres as for each case study I always hesitated between more than one. There isn’t one type of film preset that really stands out from the others. They are all well-balanced and you can clearly see that a lot of work went into finalising them.

The Agfa Scale 200 is the one I selected the most for landscapes, mainly because it retains more detail in the sky/clouds. Kodak Tri-X and T-Max are great for street while Fomapan is one of my favourites for portraits. But all this comes down to personal taste and the style you are looking for.

Some presets emulate the grain produced by high sensitivity (or speed) films like Kodak T-Max 3200. If you are looking for a grainy rendering, they work really well and I also enjoyed using them with high ISO images. The toolkit also allows you to reduce or increase the grain effect.

Given the vast selection of colour presets, I decided to share images according to genre rather than go through all of them (otherwise the article would become too long).

Like the monochrome presets, you will find colour films for any taste: some are more vibrant and have more contrast, others have less saturation and others have a more dominant tint. Again the choice is overwhelming. You can see below some examples with the presets I appreciated the most.

Selecting my favourite presets for portraits wasn’t an easy task either as many of them produce a lovely look. Choosing the best is also a matter of how your portrait looks: Is it a headshot? Is it an environmental shot? Does it tend to over or under exposure? And so on.

If we look at a studio environment for example, you will keep you attention focused on the person: skin tones, hair colour, etc. In the example below, you can see two versions of the same image with two different presets: The Agfa Optima 100 (Version 06 – HC) gives a lovely red color to the model’s hair, and a delicate and uniform skin tone. The Agfa Optima 400 (Version 03 – EV+) saturates the hair colour a little too much for my taste although I found the result quite impressive.

In the second example taken outdoors in natural light, the exposure tends toward the right. Here I had a hard time choosing a preset, as there were so many that looked good. But then it comes down to the look you want to achieve. Some will render more details on the skin while others tend to produce a more ethereal look, which in this case suits the model and the light well.

Portraiture is definitely a genre that suits the RNI presets well.

You can see more examples below.

I find it easier to use these kinds of presets when I have a series of pictures that tell a story. It may take some time to find the best preset for the job but once you do, it is simply a matter of applying it to all the images and tweaking a few settings to make the series look perfect.

What about low light images? I was happy to see that the presets work well for high ISO pictures as well.

The first option is to choose those that enhance the grain but it doesn’t have to be the only rule you follow. All of them behave pretty much as well in low light situations as they do for the other genres seen above.

In this last case study, I mixed some presets taken from the Instant, Slide or Vintage folder with a few extra settings applied from the Toolkit: vintage lens, film softness and vignetting to name a few. Some presets also have an expired version that looks quite realistic.

The idea was to recreate a “vintage” look without going too overboard. Despite the category of some presets that would naturally suggest this kind of effect, we are far away from easy/cheap Instagram-like looks. All these presets were carefully constructed to be as realistic as possible.

The RNI films aren’t meant to be used only like this in my opinion, as I believe the hard work made to produce precise and realistic presets is worth more than quick vintage results. Still, I admit it’s nice to have the option.

After trying the RNI All Film 4 presets for more than two weeks, my conclusion is very positive. I got lovely results for all the genres I am interested in. The rendition is excellent and the presets handle RAW files well, no matter which camera they come from. I can’t tell you how accurate the film simulation is but I do love the look you can obtain if you want to get away from the default “digital” colours of your camera. For me it is enough to know that these presets suggest an “analog” look. The rest is in the photograph itself.

The only “criticism” (although it is not fair to call it that) is that there is a lot of choice, perhaps a little too much. The selection is overwhelming at the beginning and you will hesitate between several presets before making a final decision. Indeed, it is time consuming to go through all of them. But once you’ve picked your favourites, you will get a lot of satisfaction and it becomes natural to integrate these presets in your daily workflow.

Note: there is a free demo of the All Films 4 presets that you can find here (thanks to Sergio for letting us know in the comments). You get one preset per category (B&W, Negative, Instant, etc.).

What I don’t like about RNI All Films 4 presets: