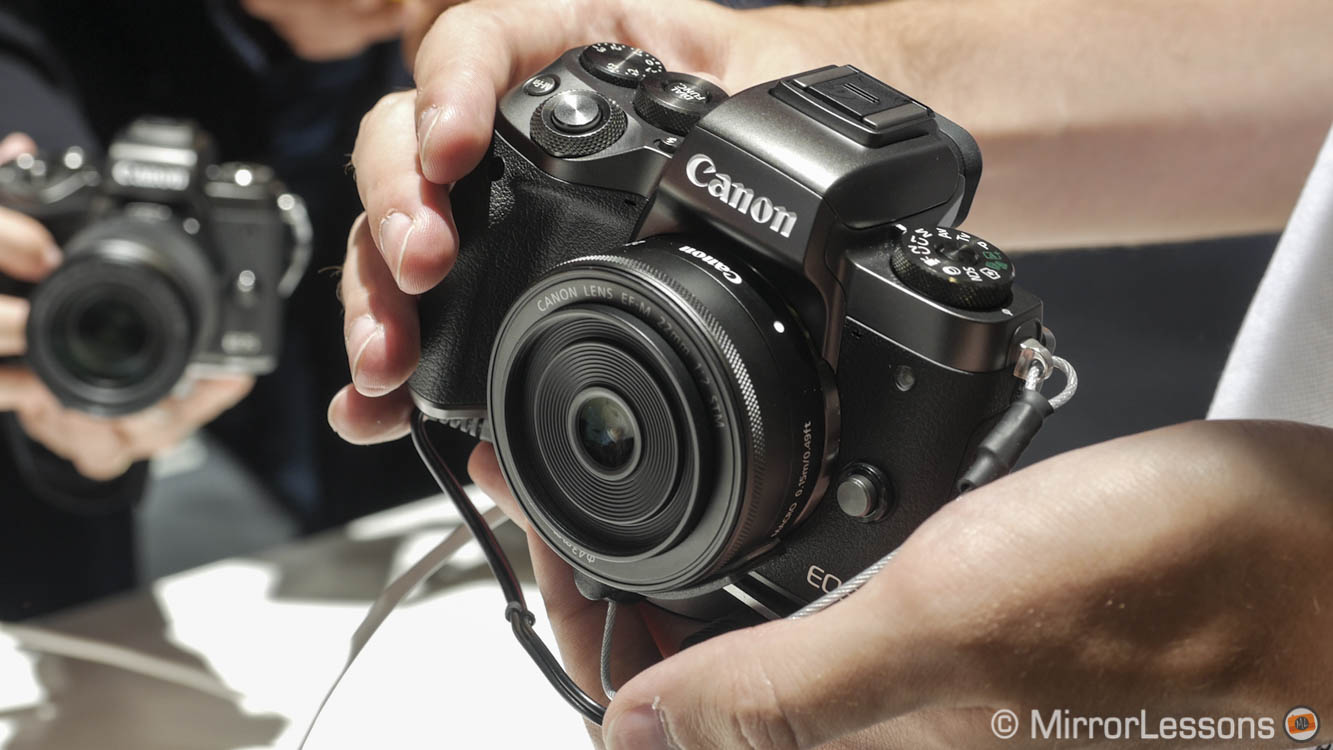 Let me be honest: I sincerely don’t know what to think of the Canon EOS M5. There, I said it. I’m sitting here in front of my computer trying to write some useful insights and I realise I don’t really have a clue.

Do I like it? No. Do I dislike it? No. Perhaps the best word would be: indifference. But indifference doesn’t help me write a review, or in this case, a hands-on review, or a first impressions review, or whatever can be considered appropriate for an article that basically says: I touched it!

That said, there is something I find interesting about the EOS M system. It is perhaps the only system that remains 100% committed to the idea of compactness. The question is whether Canon is doing this on purpose or if it is the result of a lack of motivation. What do I mean by this? Well, if you bear with me for a few more minutes, I’ll try to develop these thoughts into something that makes sense. 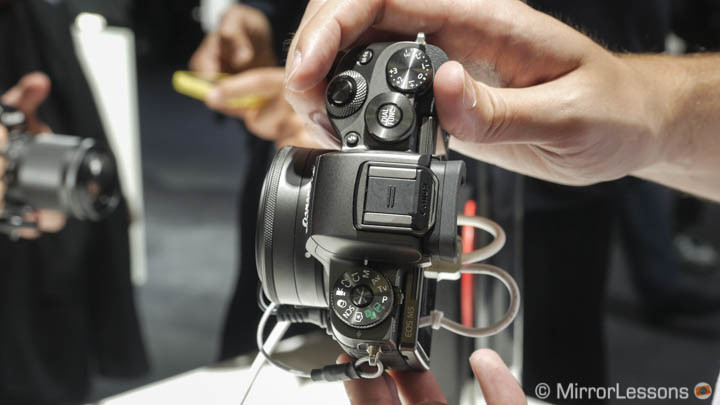 The EOS M5 is a small camera. It’s about the same size as a Fujifilm X-T10, probably a little smaller. The construction of the body didn’t impress me very much. It felt like a compact camera on steroids but the essential dials and buttons are there (twin dials for aperture/shutter speed, an exposure compensation dial, and a good number of buttons on the rear). It’s not an uncomfortable camera to hold by any means but it didn’t convince me. Maybe it is because I have big hands, which is the same feeling I had with the X-T10. The EVF is clear, bright and does the job it is supposed to do. The LCD monitor is nice, tilts up and down 180° and the touch screen is reactive. 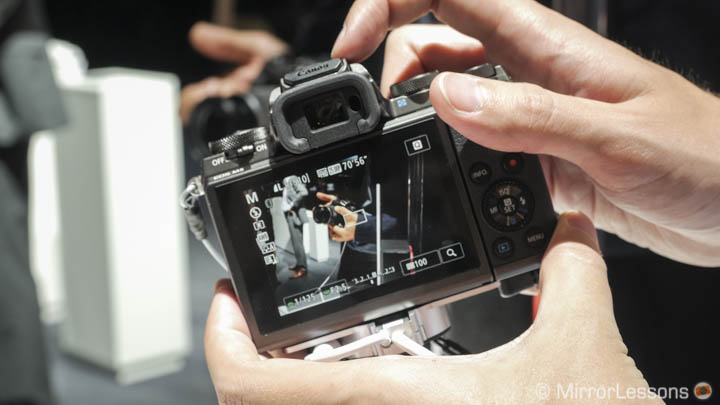 The 24MP sensor should provide enough quality for what you’d expect from an APS-C sensor these days (I couldn’t bring back some test shots). The video specifications are basic with Full HD up to 60fps and 5-axis hybrid stabilisation that is simply software stabilisation plus optical stabilisation with compatible lenses. In short, there isn’t anything in particular among these specifications that stands out from the crowd.

The AF is perhaps the most interesting aspect. Talking about its performance makes little sense for now as I could only get a vague idea of how fast the camera is. I have to say I wasn’t overly impressed but given its technology (Dual Pixel CMOS AF), I expect better performance in real-world conditions. Combined with 7fps, the M5 could be one of the best mirrorless cameras in Continuous AF with tracking (for video too) if the technology performs as well as some Canon DSLRs and Cine-cameras. 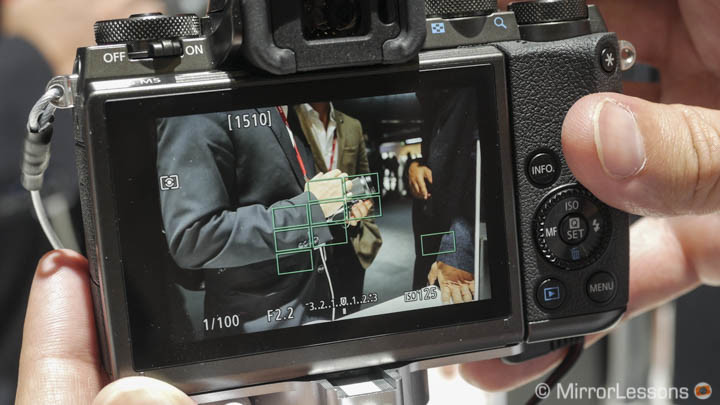 One interesting detail is Bluetooth: the camera maintains a constant low-power connection with your smartphone which should help you connect your mobile device via Wifi more quickly whenever you want to share a picture. However it would be nice if you could do everything via Bluetooth while using the camera. For example, it would be great if the camera could transfer images automatically.

The M5 desk at Canon’s booth was surprisingly crowded, even during the first days of the show. There is definitely a lot of interest in this new camera, probably more from current Canon DSLR users than other brands users.

After a few minutes of playing around with it, I gave the camera to the next person in line and left a little bit frustrated. Trying the camera in such conditions (body tied up to the desk, a big crowd around, people waiting and silently whispering “hurry-up!”) reminds me how uncomfortable a photo show can be, even just for a quick hands-on. 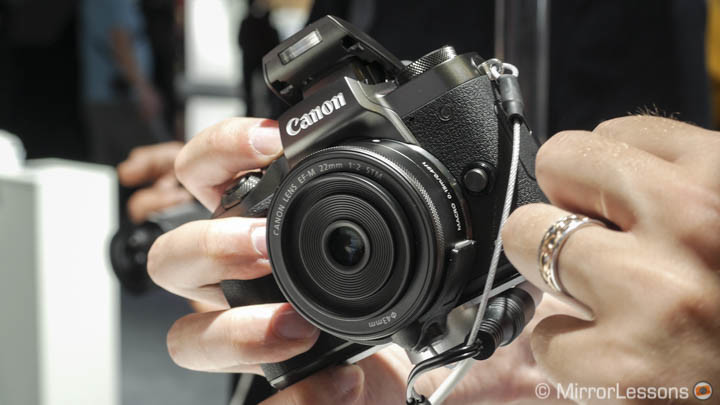 While I was walking away from the booth, I also thought about the lenses and that’s where I realised: yes, this is a compact system camera, perhaps smaller than any other today, but there is an easy explanation for this: most EOS M lenses aren’t fast. The only fast prime lens is the 22mm f/2 Pancake and then we have the 28mm f/3.5 Macro. All the other lenses are slow and affordable zooms with apertures varying between 3.5 and 6.3. So yes, the EOS M system is targeting beginners, amateurs or Canon shooters who want something smaller for their family holidays. If they were to design faster primes and zoom lenses, the size would increase considerably. We could complain about not having such an option but by limiting the lens line-up, they also manage to keep the system more compact.

The EOS M system hasn’t helped to advance mirrorless technology and Canon doesn’t seem interested in challenging the competition for the time being, but at the same time, for someone who doesn’t have large demands, the system gives what you need and remains much more compact than a Canon DSLR. The all-purpose 18-150mm 3.5-6.3, the 22mm f/2 pancake and perhaps the 11-22mm f/4-5.6 is all you need for most shooting conditions. (You can find out more about them in our Canon EOS M50 lenses guide on Mirrorless Comparison.)

It is only once your G.A.S. starts to grow and you start looking for more prime lenses or advanced gear that you’ll begin to see the limits of the EOS M system. And I think we can all agree that adapting Canon EF lenses to such a small body makes little sense. 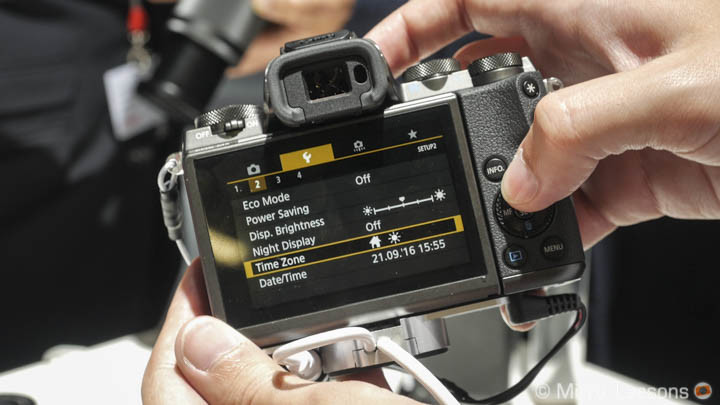 All things considered, the EOS M system is designed for Canon users or for users who would never bother to buy more than a couple of kit lenses. Is there something wrong in that? Maybe there isn’t.

We often accuse Canon of not being committed to the mirrorless (r)evolution or of not being innovative, even with some of its DSLR products (although that isn’t totally fair in my opinion). But as far as the mirrorless world is concerned, I don’t think it’s a bad thing. It gives more room to the other brands to expand and gives them the chance to build a solid reputation over time not only by acquiring new customers but by keeping them. And let’s not forget that many users switch to a mirrorless system because they’re are attracted to the smaller size, retro design or technological innovations. Not everyone chooses a mirrorless camera just because of the brand.

Let’s imagine for a second that Canon decided to release a more advanced mirrorless system.

Let’s imagine a full-frame camera with an excellent high resolution sensor, weather sealing, super fast AF, excellent continuous shooting capabilities and advanced video functionalities. Basically an advanced/pro body and a new series of lenses to make the camera as attractive as the best Sony, Fuji, Lumix and Olympus cameras. How many people would switch back to Canon (especially those who used Canon for years)? How much chance of success would this theoretical Canon camera have in comparison to the other brands? Canon is still popular and still sells lots of cameras, more than anybody else. This is probably the reason they are reluctant to go completely mirrorless but also why a serious mirrorless system of theirs could be very successful and pose a threat to the other companies.

For now, I think the Canon EOS M system is fine as it is. It’s not the most attractive system and it’s certainly not the most complete. It’s simply there to show that Canon has a mirrorless system but isn’t ready to compete with its own products. It’s harmless.

The question is: how much longer can Canon keep waiting and how much faster will the other brands grow?