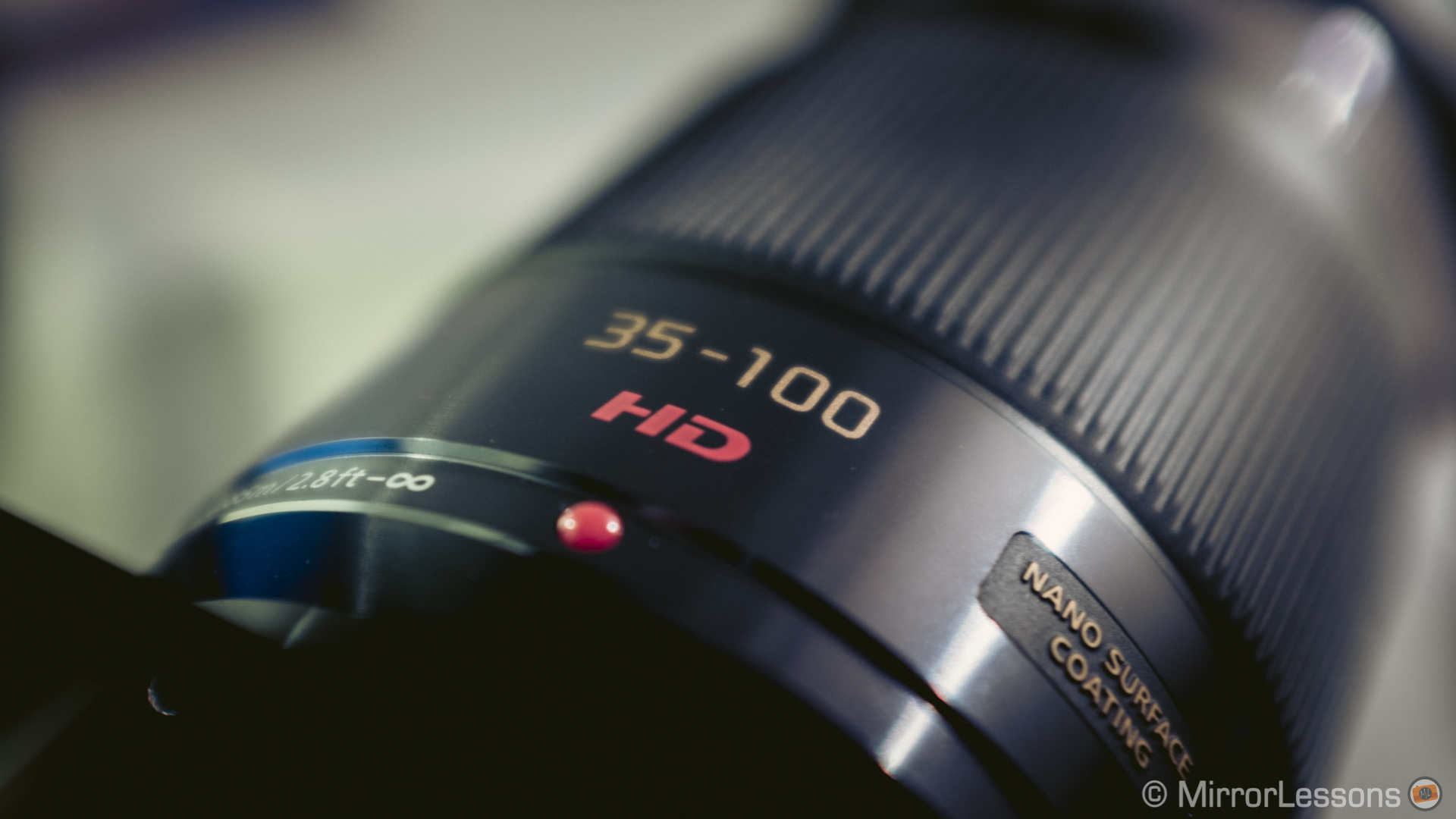 When you switch from one system to another, it is necessary to consider not only the camera body and sensor, but also the lenses. Actually, lenses have always been more important to me than anything else because they represent the primary tool that will produce a visible change in your pictures – more than pixels, noise or dynamic range. They are also the tools that will determine my composition and how I approach a work session.

One of the reasons I waited to switch to MFT for my job was that I wanted to have a wide choice of professional lenses to work with. I have always been tempted to work only with primes, and perhaps one day I will but for now, a good zoom lens always comes in handy when you are doing weddings or event shooting. Back when I was using FF cameras, the lens I used the most was the Nikkor AF-S 80-200mm f/2.8, which by the way was an old lens that I purchased second hand. When the OM-D became my main work camera, the only choice that would give me the equivalent focal length was the 35-100mm from Panasonic, which had been released a few months before I bought the OM-D. At the time, the 35-100mm and the 12-35mm were the only two f/2.8 constant aperture zoom for Micro Four Thirds. Now, Olympus is making up ground with the new 12-40mm and the upcoming 40-150mm which will be released in 2014.

The smallest and lightest professional telephoto zoom you can get

I first tried the Lumix 35-100mm f/2.8 back in March at the Milan Photoshow. What surprised me was how small and light the lens was compared to an equivalent lens for DSLRs. It was a joy to shoot with it for that short time, and to have that kind of quality in a such a small package. It is the kind of lens that is well-suited to almost every MFT body. I tried it on the new GX7 and despite the body being small and compact, the lens doesn’t unbalance the combo. Of course, given that it is a telephoto lens, it is better to use it with a body that has good hand grip such as the GX7 or the E-M5 with the optional landscape grip, but I’ve also tried it on the Pen E-P5 and it still feel nice to use.

Compactness is a key feature of the MFT system and this lens really is one of the best examples out there.

The build quality of the lens is also very good, with a well-constructed metal and plastic finish. The zoom ring has a large rubber grip that is very nice to use and touch. It also helps if you are shooting without gloves on in the cold. A similar approach has also been taken by Zeiss with their Touit lenses. The focus ring is at the end of the lens and is made of metal. This isn’t the type of lens you would often use in manual focus mode for stills, but I have used it occasionally for manual video focus and the ring is very smooth and precise, make the process easier.

The lens is supplied with a plastic hood that is half the length of the lens. Therefore with it attached you lose a bit of that compactness, but it is solid and protects the lens very well, so I cannot really complain here. Last but not least, the lens is splash and dust proof.

After using this lens with no less than four bodies (E-M5, E-P5, GH3 and GX7), I can say without a doubt that it is one of the best lenses you can buy for MFT.

The lens is sharp at its fastest aperture f/2.8. Colours are vibrant and contrast is well-balanced. I have never found anomalies such as chromatic aberration for example. I would say it is the perfect lens. The glass inside has a Nano Surface coating that reduces ghosting and flare, although admittedly it is rarer to have flare with a telephoto lens, especially when you use the supplied hood.

This is a lens that I use 90% of the time at f/2.8. It is great for portraits and isolating the subject from the background – it only makes sense to use it like this in my opinion. Of course, with the MFT sensor being smaller than Full Frame sensors, you won’t get the same kind of bokeh and depth of field you might have with a Nikon D4 and a 70-200mm f/2.8. However, since making the switch, I have hardly missed that.

I have also used it a couple of times for landscape shots. Usually, you would mount a wide angle lens for this kind of photograph but by using a telephoto lens you can bring home some unusual compositions. That’s what happened once in Wales at the Cregennan Lakes.

Now the problem when taking this kind of shot is that you need to use a “safe” shutter speed in order to avoid micro shakes and blur. That day was very windy and partially cloudy, so I had to find a good balance between shutter speed and aperture to keep my images as sharp as possible.

In terms of overall sharpness, the lens performs best at its middle apertures (around f/11). At f/2.8, it is slightly softer; at f/22 it suffers from some diffraction. I didn’t notice a significant difference between the shortest focal length (35mm) and the longest focal length (100mm) in terms of the lens’ performance and quality.

The 35-100mm gives me exactly what I need for both image quality and portability. And honestly, moving around a big room full of people during an event with an E-M5 and this lens instead of a 70-200mm for DSLRs makes a big difference.

You will find some marks such as a red “HD” which signifies that the lens has been designed to give optimal quality for both stills and video. I haven’t used it as much for video but the results I got were perfect when I used it with the GH3. This kind of lens can work well for video, but if you are shooting outside on a sunny day, you will need ND filters to keep your aperture fast. That is always the problem with video.

Through the lens: Autofocus and stabilisation

The autofocus works wonderfully on both Olympus and Panasonic cameras. It is fast, accurate and silent. I have never encountered any problems even in low light. I do not use it a lot in continuous autofocus mode, but the test I performed with E-M5, E-P5 and E-M1 were all positive with regards to the performance of the lens. Now, we mustn’t forget that autofocus also depends on the AF system of the camera, but in the case of this lens, it always performed in the same manner regardless of the camera and its AF system. This can only mean that the quality is top notch.

Below is a test I performed at Castle Leslie with the E-M1.

Below is a quick test to show you the effectiveness of the O.I.S.: in the first picture, taken at 1/15 of a second with stabilisation off, you can see in the 100% crop that the stuffed toy has lost a lot of detail. With the stabilisation set to On, it is sharper.

Well, that is a very good question to which I don’t really have an answer at the moment but it is something I am personally considering. First of all, the Olympus M.Zuiko 40-150mm f/2.8 ED Pro will be available in 2014. I had the chance to see and touch a prototype of the lens back in Castle Leslie in Ireland, but it wasn’t operational. Assuming that the image quality is as high as that of the Olympus 12-40mm, the difference comes down to weight and size.

The 40-150mm is double the size of the 35-100mm but it is still reasonably small if we consider the focal length it covers and the extra 50mm you get in telephoto. Personally, having that extra length (100mm in 35mm format) can be a great benefit for my work, particularly at times when you want to take a close-up of your subjects but you cannot close enough to them. This happens often in my case, and having an 80-300mm f/2.8 equivalent (35mm format) could be the key factor in my decision. The flip side is that I will lose the extreme compactness of the Lumix lens, so I really need to figure out if those extra millimetres are worth it or not.

The Lumix 35-100mm is a wonderful telephoto zoom lens for the Micro Four Thirds system and is a must have if you are looking for a fast zoom. I cannot really find any weak points. It gives you the exact performance you need for this kind of zoom lens and its small size is clearly a big advantage for those who wish to keep their gear compact. It isn’t a cheap lens – $1,000 is often considered high for a MFT lens but you get what you pay for, and you won’t regret it. Also, remember that an equivalent lens for DSLRs costs more than double.