You are here: Home / Mirrorless News / Sony’s Full-On Full Frame Attack: The A7 and A7r are made official! 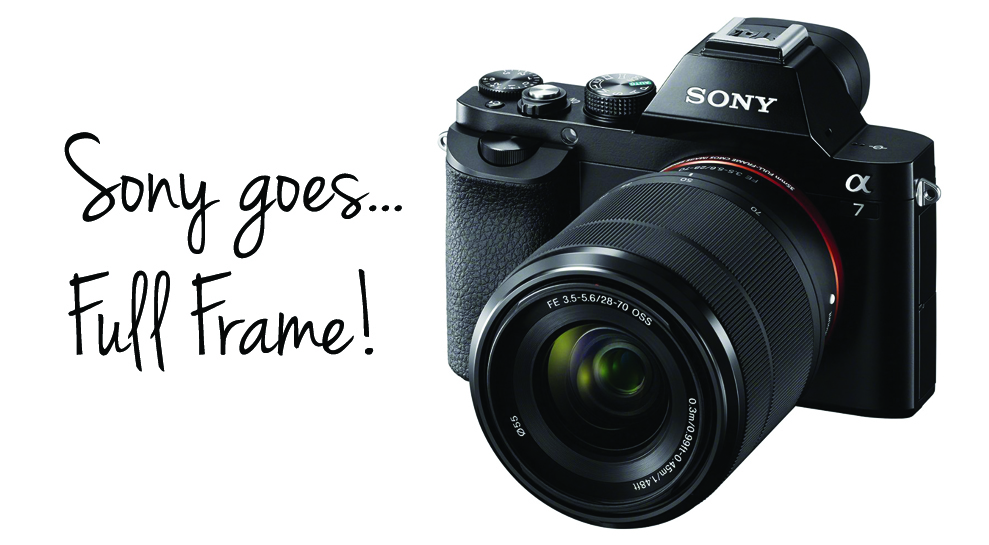 There has been such an onslaught of rumours over the past few months about Sony’s plans to make a Full Frame interchangeable lens mirrorless camera that many of us were even beginning to wonder if all this talk was simply a clever ruse of Sony’s to get people talking about the brand.

In the end, it turns out that most of these rumours bear more than a grain of truth. Today the world’s first Full Frame mirrorless interchangeable lens cameras with autofocus, the Sony A7 and A7r, were announced, marking a significant milestone in the progression of digital photography.

Why are the Sony A7 and A7R the most exciting announcements of the year?

A reasonably priced compact full frame camera with an interchangeable lens system has long been a dream for many photographers. However, it was less a realistic dream than an idealistic one. Many people were thinking something along the lines of “yes, it would be cool to have” but never really wished for it in a serious manner. Maybe this was because we didn’t think that Full Frame DSLRs could be challenged. Or maybe it was because the only alternative to full frame cameras was too expensive and “niche” to become a viable alternative (of course, I’m talking about Leica). Or perhaps it was because we were already too focused on our DSLR or MFT investment to take something that “might” happen in the future seriously.

In the last two years, the mirrorless sector has seen some very good alternatives to DSLRs. The mix of portability, compactness, speed and retro design has encouraged some photographers, both enthusiast and professional, to make the switch from one system to the other, or pair these cameras with their DSLRs. Up until now, those who didn’t want to compromise overall image quality had never considered mirrorless for serious usage. Full Frame in the MILC market seemed too far off, and even though it would eventually come, it was always assumed that prices would be too high to be considered by most of us. Take the Sony RX1, for example, the only full frame compact camera available on the market. It costed nearly $3000 at the time of its release. It doesn’t have a viewfinder and it only has a fixed lens.

But the market can change if someone decides to challenge it, hoping that we, the potential buyers, will follow.

As of today, we know that in December a compact full frame interchangeable system camera will be available starting at $1700. From the RX1 and the QX1 lenscameras for their smartphones to their mirrorless NEX series and their soon-to-be abandoned DSLTs, it seems that the firm has never stopped experimenting and challenging the market, playing around and designing new and advanced cameras and putting them out in the real world as “lab rats” to see what will happen. And of course, we are talking about a company that along with all this produces Playstations, Bravia TV professional cinema and broadcasting cameras and many other electronic devices.

Can a company so diverse in its nature become the new leader in the photography industry? Could it have understood the movement of the market before Nikon, Canon and all the other photography giants out there?

Before getting into that, let’s talk about the most interesting features of these new cameras. The Sony A7 and A7r are the lightest FF interchangeable lens cameras on the market. While almost physically indistinguishable, they differ concerning some of their key technical specifications.

The A7, the cheaper of the two, has a Full Frame 24 MP sensor with phase detection and contrast detection AF. It is slightly faster than the A7r at 5 fps but has an Anti Aliasing filter. It is available for pre-order at around $1700 US (body only).

The A7r, being the higher-end model of the two, has a Full Frame 36.4 MP sensor and no Anti Aliasing filter, allowing for cleaner and sharper images. It is ever-so-slightly slower than the A7 at 4 fps and only uses contrast detection AF. It is available for pre-order at around $2300 US (body only).

The A7 and A7r have the new BION2 X image processor, which Sony claims is three times faster than the previous processor and has an advanced sharpening capability to render details better than before. Both cameras can record 14 bit RAW files. Another interesting feature is the uncompressed full HD signal available through the HDMI port, something which could be interesting for filmmakers. Below are the other main specs that both cameras share:

Along with the A7 and A7r, five new lenses from Sony and Zeiss have been announced. Sony also revealed that it plans to create 15 new lenses by 2015, including the five announced today.

The new lenses are as follows:

We’ve also just heard that Samyang will be releasing five inexpensive high-quality primes for the Sony A7 and A7r within the next two months. They are manual lenses just like every other Samyang lens and we have yet to discover details about the quality and if they will come at a reasonable price. We can expect more third party lenses to be announced in the near future. What’s more, basically all Canon, Nikon, Leica and other full frame lenses will be usable with third party adapters, like the Metabones series which retains AF capabilities. The Samyang lenses are as follows:

Do the A7 and A7r mark a crucial step forward in the high-end photography market?

As always, I won’t make any sweeping statements before I have the chance to try these new cameras. The first hands-on and sample images are already on the Web (the best way to follow all the updates is to check sonyalpharumors on daily basis). Based on many analyses, I can predict several ways this can go down.

First, the A7 and A7r mark the beginning of a new system, therefore their success won’t depend solely on the sensor size. Yes, we all love the idea of full frame quality, there is no shame in admitting it, but it isn’t everything. I switched from a full frame DSLR to Olympus MFT and Fuji X not only for their unique features and portability but also because today even a smaller sensor produces enough quality for most of our needs. That said, no matter how objective we are about choosing our gear, better image quality is always seducing. But that doesn’t mean I or somebody else will go for it.

What is going to be tough for Sony now is to keep the whole package reasonable and small. Just to be straightforward, I am certainly not interested in using this camera with something like this:

No, I love the A7/A7r concept because it is portable and light like this:

So, the first challenge for Sony is to create fast and professional lenses but at a reasonable size. After all, using a massive lens on a small and light body doesn’t really make any sense. A body like this is much nicer to use with fast primes or portable quality zoom lenses. In short, Sony needs to release a viable and concrete lens system for this camera. The lenses have to be as attractive as the camera is. Since the sensor isn’t everything, the lenses available for it also make a huge difference.

Yes I could use Canon, Nikon or Leica lenses with different adaptors but doesn’t that mean stepping into a niche market? Would you really sell your 5d mkIII or D800 just to buy a smaller body to use with your heavy lenses? It may work for some Leica lenses because they are small (along with high image quality, Leica lenses are popular for that very reason), but they are expensive and only focus manually.

I really hope that the remaining ten lenses on Sony’s roadmap include small, fast high quality Zeiss primes at a reasonable price. Then with some fast constant aperture zooms, we will see the complete evolution in photography gear we’ve all been waiting for. But the later these lenses arrive, the more time the competition will have to catch up.

Of course, I am not an engineer and I can’t read too much into the decisions a brand makes about the lenses they choose to design and release but I cannot help but wonder why the 35mm f/2.8 isn’t a f/2 lens at least and the 55mm an f/1.4 lens. Those are probably pixel peeping questions but since we can be “obsessed” with full frame, we can also be obsessed with fast aperture lenses.

There is another thing I wonder. Why did Sony choose to place the bar so high for megapixels instead of including ISO as well? Why not build an A7R with a crazy 36mp sensor for those who want sharpness and a 16mp sensor on the A7 with an ISO range similar to the Nikon D4 (100-204800)? Full frame sensor technology allows for this, doesn’t it?

Can you imagine a $1700 full frame mirrorless interchangeable lens compact camera that can make 6400 ISO look like 800 on other cameras? That would be a true killer feature in my opinion. Imagine all the benefits you would get in low-light conditions.

I have to give credit to Sony for all the new and original products it has released up until now. They definitely play a big role in the evolution of photography, and the A7/A7r deserve great consideration from photographers. But now, those same photographers are about to talk, and we will have to see if these new cameras really meet all the needs we have, even with a full frame sensor.

What I am also sure about is that these two new cameras will serve as “lab rats” for the competition as I suggested above. Everyone will look closely at how the market will react. If it works, I bet we will see other full frame mirrorless cameras in the next year. By the way, the first Fujifilm full frame camera rumour has just leaked. I’m just saying…

P.S.: By the way, Sony also confirmed the upcoming release of the RX10, a high-end bridge camera with a 20MP 1-inch sensor that will sit between the RX1 and RX100. Being noticeably larger than both the RX100 and RX1, it hardly looks like it belongs in the RX family at all. There is, however, a good reason for this – it has been built to accommodate the wonderful fixed 24-200mm lens with a constant f/2.8 aperture, which is less than half the size of any other zoom with a constant aperture out there. Sony is pushing the boundaries even further… Thumbs up!

What do you think of Sony’s move towards Full Frame mirrorless? Do you think it will be a success?