You are here: Home / Panasonic Reviews / GX7 / Contemporary Dance in Moncalieri: Pushing the Lumix GX7’s autofocus to the limit 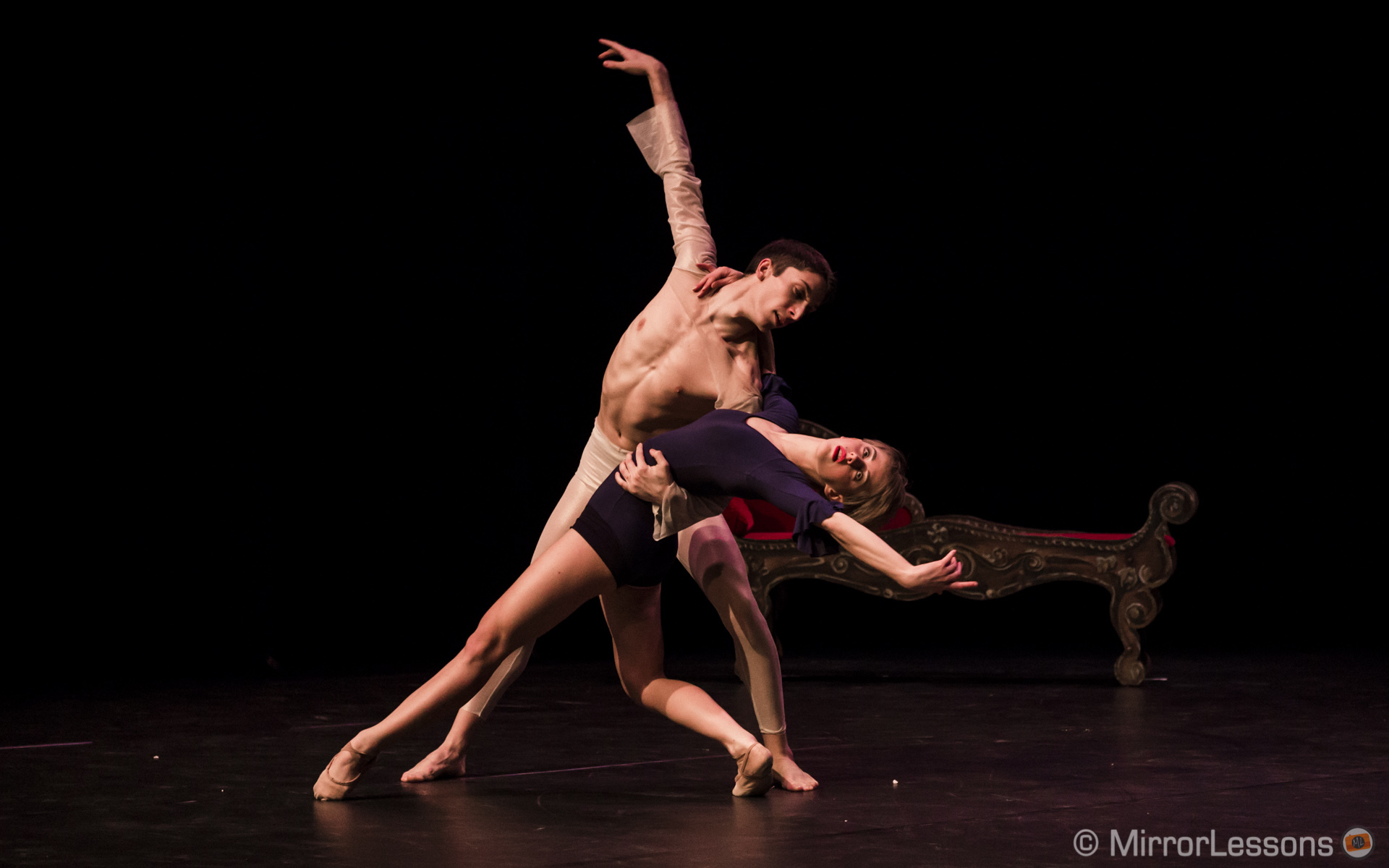 “Elena’s asked us to photograph one of her dance performances on Saturday night in Moncalieri,” I hear Mathieu yell from the kitchen.

Looking down at the Panasonic Lumix GX7, a smile breaks across my face. I realise that there is one more test I have to perform before I can close the chapter on this mirrorless marvel. Though I’d already used the GX7 in poor lighting to test the ISO and internal stabilisation, and tried out the C-AF, tracking and continuous shooting on my friend’s daughter running towards me on a sunny day at the park for our full review, I’d never put the two conditions together. The combination of low light and moving objects would tell me whether the GX7 could really claim the title of ‘professional mirrorless camera’ or not.

If you haven’t already done so, click here to read our full review of the Lumix GX7.

About the dance and location…

The dance performance was held in a theatre illuminated by common theatre lights on stage. It featured dancers performing a mix of classic ballet and contemporary dance. The scenes were quite varied; some featured a single couple, while others would have up to eight ballerinis running around the stage at the same time. The intensity of the light also varied depending on the mood of the scene. Props such as dark sheets, balls and rolling stools were used, and costumes ranged from very darkly-coloured leotards to elaborated 18th century gowns. Almost all the dances featured rapid jumps, turns, cartwheels and sprints from one end of the stage to the other.

To say that the GX7 had a lot on its plate would be an understatement!

In preparation for the performance, I tweaked quite a few of the GX7’s settings. AF Assist off so I don’t blind the performers and annoy the audience? Check. Silent shutter on for ultimate discreetness? Check. Reduce size of AF point to minimum? Check. C-AF and tracking activated? Check and check.

My choice to use Silent Shutter was a logical one. Though there was classic music playing in the background, it wasn’t so loud that you couldn’t hear the click of a shutter. I wanted the freedom to shoot as often as I wanted, as you never know when the decisive moment in a performance will arrive. In my opinion, this is a huge advantage of the GX7 over its competitors. (While I love the Pen E-P5, for instance, its shutter would have made too much noise for a performance like this.)

Using the Silent Shutter did mean that I could not go over 3200 ISO but I never found that it was necessary as long as I kept the aperture to f/2.8 and the shutter speed between 100 and 200. Plus I knew from experience that the GX7 raw files were flexible enough that I could boost the exposure and reduce the noise back home in Lightroom without losing too much detail.

As for the focus point, I decided to reduce it to its smallest size as the default size tends to be too encompassing. It would have focused on groups of dancers rather than a single subject, and often I wanted to track one ballerina amongst many.

My lens of choice for the majority of the performance was the Lumix 35-100mm f/2.8. Being a telezoom and a Lumix product, it was probably the best lens I could have had on hand for a test like this.

Looking for a great telezoom for your Lumix or Olympus? Read our Lumix 35-100mm f/2.8 review!

‘Cioccolato’ (or ‘chocolate’ in English) is a beautiful Italian ballet broken up into short stories about the effect chocolate can have on the human psyche. From excitement to passion to love to jealousy, each dance reflects an emotion, often in a humorous or unexpected way. The dance company (Egridanza) had decided on chocolate as a theme as the famous CioccolaTò festival was on at the same time in Torino.

For the entire duration of Cioccolato, I had the GX7 set to C-AF and tracking. Overall, the camera did very well at following the dancers, though it would lose focus if the dancer ran too quickly or if a foreign element entered the scene like a back-up dancer or prop. I often found that the focus would lock onto the painted tree in the background if a dancer passed in front of it. This was nothing out of the ordinary, however, as the dancers’ leotards and the tree were the same colour (brown) for many scenes.

Very rarely did it stop focussing completely and start hunting. This would only happen when many dancers entered the stage and began running around unpredictably. It also had trouble during the very first dance featuring a darkly-dressed man performing extremely quick acrobatics on a large ball. In this case, all I had to do was press the Menu/Set button, have the focus point return to the centre, and start again.

For the last two stories, I switched on the continuous shooting as well. With the Silent Shutter activated, the GX7 can shoot up to 40 frames per second, which is perfect for those fleeting moments when the ballerinas twirl or jump in the air. I enjoyed being able to see the frames I shot play out in real-time before my eye through the viewfinder, but you can disactivate this function if it bothers you.

One of the performances, featuring two dancers dressed in brown and carrying a dark bed sheet, should have been particularly challenging for the camera, as the lighting was very poor and the dancers blended in with the background and the sheet. Nevertheless, with continuous shooting activated, the GX7 managed to keep the subjects in focus about 50% of the time when they began running frenetically around the stage.

Not to go all colloquial on you, but I really had a blast using the GX7 during this performance. I truly felt that I could trust the camera to focus on the right elements at the right time in most situations, save the most difficult where the lighting was poor, the movements were quick, and the dancers were dressed to match the background. In those situations, it may be better to switch back to S-AF and use your photographer’s instinct to capture the moment you want. It also helps to go back for a second round of shooting on a different evening if the dance company agrees, as you’ll have a better idea of what to expect.

Can the GX7 work as a first or second professional body for a job like this?

As I said in the full review, I wholeheartedly believe it can. I won’t deny that the performance and results on a full-frame DSLR would be better but if you highly value using a light and compact body on the job, you’ll find that the compromises in image quality and speed aren’t so big in the end.

The important thing with any camera is to get intimate with it, memorise its strengths and weaknesses like the back of your hand, and mould it to your will. By doing so, you’ll have no trouble bringing some great images home for yourself or your client.

If you’re interested in seeing some more photos from the performance, you can browse through the gallery below! 🙂

Many thanks to the Egridanza Foundation for allowing me to publish these photographs!