You are here: Home / Sony Reviews / A7-A7r / First Impressions of the Sony A7 from an Amateur Perspective 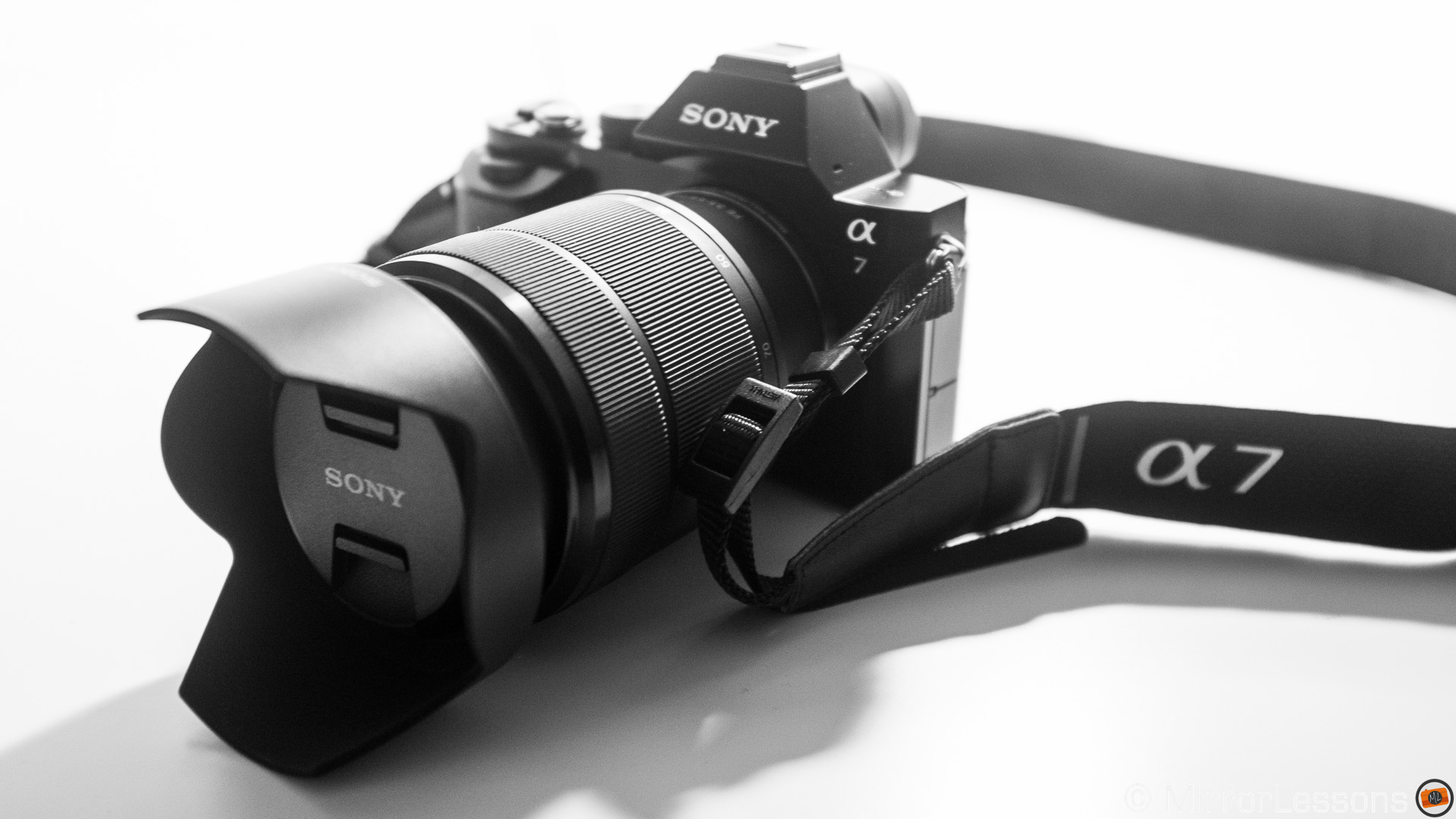 With our full-time jobs eating away at all our spare time since the New Year began, it hasn’t been easy to give our new companion, the Sony A7, the serious workout it deserves.

As such, last week I made a pact with myself: I’d leave the house an hour earlier than usual every morning before work and bring the Sony A7 out with me. Doing so gave me the time to get to know the inner workings of this wonderful camera quite well. As it turns out, it is always possible to make time for photography, even when you don’t seem to have any!

More than any other camera brand, Sony has been the harbinger of new and innovative technology in recent years. Indeed, the company has many “firsts” to its credit. It was one of the first companies to place an APS-C sized sensor into a small ILC body. It was also the first to create a 24MP and 36MP full-frame sensor. In 2012, Sony managed to put that full-frame 24MP sensor inside the compact body of the RX1, and now, they’ve turned the mirrorless world on its head by placing a 24MP and 36MP full-frame sensor inside two compact interchangeable lens bodies, the A7 and A7r respectively. Let’s just say that Sony has never been afraid to experiment, and unlike many other camera brands, undoubtably has the financial margin to do so.

The difference between A7 and the A7r

The A7r, with its 36MP full-frame sensor, is certainly the more enticing of the two in terms of pure image quality, but its purpose is very specific. It is ideal for photography where large prints are required, such as still life, landscape or urban architecture. The A7, on the other hand, has fewer megapixels (24MP), and with its faster hybrid contrast and phase detection autofocus, it is the perfect camera for everyday photography, from street to portraiture to casual landscape.

The A7 as an everyday camera

Since I only had the 28-70mm kit lens, I mostly used the A7 as an everyday walk-around camera, so that is the perspective I will review it from. Keep in mind that, as an amateur who principally uses Micro Four Thirds cameras, my perspective will not be the same as a professional coming from a Nikon D800.

The Sony A7 is one of those cameras whose design provokes mixed feelings. Just like marmite, some love it, some hate it. As for myself, I’m on the fence about it. There are many things I love such as the super-solid magnesium alloy build, the ample hand and thumb grip, the tilt-screen, the sturdy on/off switch, the inclusion of an exposure dial on the body, and the wonderfully bright and detailed EVF which rivals that of the Olympus VF-4.

However, there are also a couple of things that make me question Sony’s judgement. The location of the Menu button on the far left side of the camera, for one, is extremely annoying if you are shooting single-handed. I was also bothered by the “squishiness” of the shutter button, as I am more used to sensing a graduated step between pressing down the button to focus and actually pressing it down to shoot. More than once, I ended up taking a shot when all I wanted to do was focus.

Speaking of the shutter button, I was quite surprised to discover that the shutter noise doesn’t bother me at all. It is admittedly louder than every mirrorless camera I’ve tried thus far, but I’ve never felt awkward using it, not even at the children’s theatre performance I photographed last week. Of course, with a camera like the Lumix GX7 whose shutter noise can be turned off completely, I was able to rapidly fire off shots without thinking twice, whereas with the A7, I have to be more selective.

Less of an annoyance and more of a curiosity is the fact that Sony did not choose to make the LCD a touchscreen. I find the touchscreen on my Pen E-P5 so useful when I want to quickly focus on something or flip through my images. Touchscreens are ubiquitous these days, so I hope that future full-frame models from Sony will include this feature.

All in all, I feel Sony’s put a lot of thought and care into the design of the A7. As with every new system, they are a few minor areas that need tweaking but the overall impression it delivers is one of quality, durability and professionalism.

I’m sure I’m not alone in thinking that the Sony A7’s menu likes to makes you work for your photograph at times. Though it is fairly straightforward to navigate, not every function has been placed in the most appropriate sub-menu.

I spent over twenty minutes searching for the tracking function, for instance, which is not set as an opinion in the Focus Mode menu beside AF-C. Rather, it is located it its own dedicated sub-menu called Lock-on AF. For situations where various focus modes are necessary, such as a dance performance or event, I believe it would be much better to have the tracking function located close to C-AF for quick and efficient switching between focus modes.

The Fn button is a very useful addition, as it displays the most frequently used menu items in two rows of icons. I use it far more frequently than I do the actual menu.

I also like how the camera will take you back to the same place you left off in the menu even if you leave the menu to shoot or turn the camera off. There is nothing more tiresome than sifting through sub-menus to return to your desired function.

Small grievances aside, I can say that the menu is perfectly fine once you get used to it. I am certainly speedier at navigating it now that I’ve used the camera for a while than I was at the beginning!

Ah, and now we arrive at ace hidden up the A7’s sleeve: pure image quality. The killer combination of 24MP and a full-frame sensor is reassurance that every image that comes out of the Sony A7 will be crisp, vibrant and detailed.

The raw files are also incredibly flexible. In one of the photos I took for the school where I work, I was able to recover all the details in the face of a dark-skinned child who was completely obscured in shadow without losing any quality. I cannot show the image here for privacy reasons but the result left me with complete confidence in the raw files of the system.

What else can I say? The quality of the images is just what you’d expect from a full frame camera. No complaints here! 🙂

I’ve been impressed with the low light performance of the Sony A7 so far. On my Olympus Pen E-P5, I generally avoid going above 3200 ISO whereas a few test shots with the Sony A7 soon told me that I could relax even at 12800 ISO.

The small test I performed was at a local church called San Domenico in Turin. As you can see, the raw images at 6400 ISO retain a very good amount of detail, 12800 ISO is perfectly useable and 25600 is good enough for extreme circumstances. Noise is present at all ISO speeds but it can be controlled in post-processing. The JPG engine also does a good job at suppressing noise without producing the “mushy” effect that I’ve noticed from the Pen E-P5 and GX7 at high ISOs.

I did notice that the EVF’s refresh rate slows down in very dark places such as the insides of a church but that is no surprise as there isn’t an EVF out there that can match the immediacy of an OVF, especially in low-light conditions.

While the autofocus isn’t as fast as that on a Micro Four Thirds camera, the Sony A7 generally doesn’t have trouble quickly and accurately locking onto either inanimate or moving subjects in broad daylight. Admittedly, it tends to hunts a little in low light and won’t always lock onto subjects with little to no contrast, but this may be the fault of the lens more than the camera. When we tried the Sony 55mm f/1.8 Zeiss on the Sony Day in Turin, our impression was that it was faster and more accurate than the kit lens, but we will have to conduct a proper comparison to confirm this.

Like with Fujifilm’s X series cameras, autofocus is not the Sony A7’s forte. However, I would say that the kind of breakneck autofocus you’ll find, say, on an OM-D E-M1 isn’t really essential on a camera like this as most people will be using it for landscapes, portraits, events and street, not sports.

As kit lenses go, the 28-70mm f/3.5-5.6 is pretty darn good. It gives you a nice focal range to work with for everyday shooting, and was enjoyable to use even at the theatre performance I mentioned above. Of course, in low light, the maximum aperture of f/3.5 can be limiting but this is compensated by the great high ISO performance.

If you get in nice and close, the background bokeh is also very pleasant. The lens produces those perfectly round bokeh circles photographers seem to lust over as you can see below.

Will we be keeping the 28-70mm? For the moment, yes. However, our main interest lies in the current 55mm f/1.8 lens, and the primes Sony will bring out over the next couple of years. Primes are smaller and faster, which is the ethos of this new system. It makes little sense to attach oversized zooms to a camera that was designed to be compact.

I am sure than once Sony expands its lens roadmap to include telephoto and wide-angle lenses in 2014 and 2015, there will be much more to say about this camera’s application in other fields of photography.

It may seem that I have been overly critical of the Sony A7 in this article but that is only because I know what this camera is aiming to be – a DSLR replacement. If the Sony’s full-frame A line wants to play in the big leagues and eventually become a viable successor to the DSLR for professional work, it requires the characteristics of a complete system. This means great image quality in all lighting conditions, quick and accurate autofocus, a wide range of fast quality lenses, and great ergonomics.

The A7, along with the A7r, is Sony’s first shot at a truly well-rounded professional system, and I feel that as first tries go, Sony’s got something to be proud of. Give them a few years to fine-tune the system, and they will really have the DSLR segment shaking in its boots.

If you are considering the Sony A7, for what kind of photography are you planning to use it? 🙂