You are here: Home / Olympus Camera Reviews / Our Readers’ Q&A: All about the Olympus OM-D E-M10 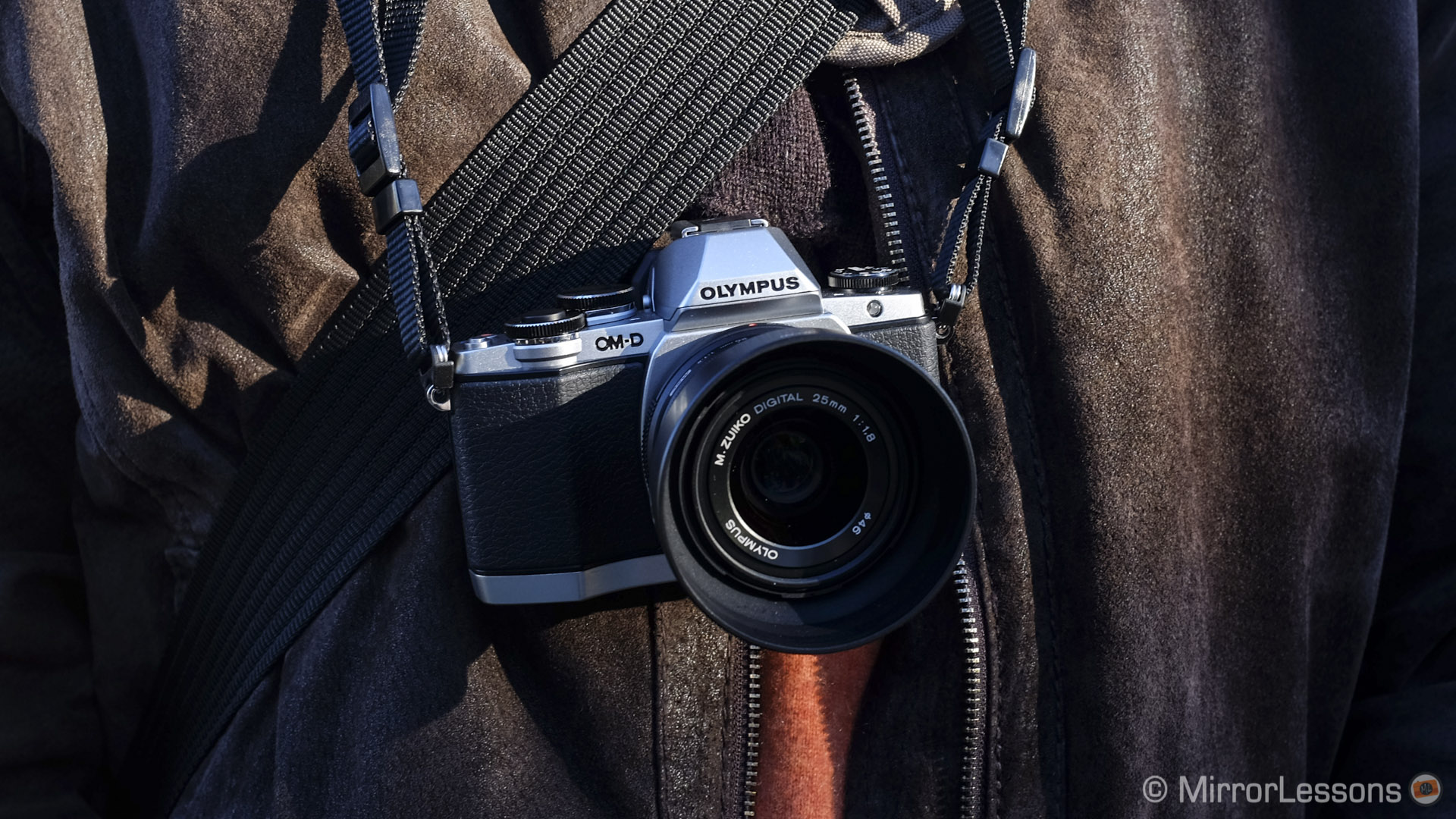 When we published our first impressions review about the new Olympus OM-D E-M10, we invited our readers to rack their brains and pitch some questions to us about the new camera. We received many comments, not only on our articles but in the Micro Four Thirds User Group as well, so we decided to post a specific article where we answer as many of your questions as we can. We also included questions and answers about the new 14-42mm pancake zoom lens and the 25mm f/1.8.

Some of the simpler questions we already answered in comments section of the articles or on the MU43 forum, but we decided to include them here as well so that they can be of use to other people seeking the same information.

Note: Please understand that we do not own all the gear mentioned in this article. As such, we couldn’t perform an extensive comparison for all of them, especially regarding the lenses. (Forget the tooth fairy, we need a gear fairy for these comparisons! ;-))

A: Yes, the dimensions are the same, as are the magnification and dot resolution. The main difference is that the E-M10 EVF has a high speed mode that brings the refresh rate up to 120fps (in exchange for a loss of resolution when activated). I didn’t notice that it drained battery a lot while using it.

Q: Does the E-M10 suffer from the shutter shock effect like some Pen E-P5 models?

A: I took several pictures with the E-M10 at the sensitive shutter speeds reported by DPreview for the E-P5 and I didn’t find anything abnormal. Therefore, it seems that the OM-D E-M10 doesn’t suffer from any shutter shock. Below you can check out some of the pictures.

Q: Is it possible to take more than 99 shots when using the Live Composite mode? Can the NR filter be set to off as well?

You can take as many pictures as you want. Once you set the exposure time for each shot and launch the Live Composite mode, it will only stop when you press the shutter button again. The first photo below for example was taken in approximately one hour with an interval of 3.2s per image (approx. 1,125 shot and). As for the NR filter, you cannot set it to off. The option is grayed out and set by default to on.

Q: How many shots can you take during video recording?

There doesn’t seem to be any limit. During video recording, the camera can take only JPG images (not RAW) at medium resolution (3200×1800) and normal JPG compression. I managed to take 40 shots in less than a minute of video recording. I guess that way the image processor can handle the buffer for images while recording full HD video.

Q: Is there a way to connect an external sound recorder?

Unfortunately, the camera doesn’t have any Line or Mic input. The only available ports are mini HDMI and USB/AV out.

Q: How does the metering work in comparison to the OM-D E-M5?

Overall, they are very similar. But in many cases, if you set the E-M10 and the E-M5 to the same exact values and frame the same scene, the E-M5 metering system will indicate that the image is slightly underexposed (- 1/3 Ev).

Q: Does the E-M10 have the ability to take multiple photos like the E-M1 does in HDR mode?

Q: Does the camera produce high noise levels at long exposures with the NR filter set to off?

No, the camera doesn’t produce the same amount of noise found on the E-M1 when taking long exposure shots with the NR filter deactivated. Below is a quick example shot taken in 30 seconds with the NR set to off. The result isn’t a surprise because the E-M1 has a different sensor to the E-M5 and E-M10.

In AF-C and AF-Tracking on both cameras works in the same way. I din’t find any substantial difference despite the fact that the E-M10 has more focus point. I performed a quick test where I asked Heather to run towards me. The lens used was the Lumix 35-100mm f/2.8. Below you can see the image thumbnails in Lightroom. The green highlighted images are in focus, the yellow images are slightly out of focus but you see it only when viewing the images at 100%. The red images are out of focus.

Q: Are there any differences between the E-M10 and E-M5 regarding high ISO?

Yes. I would say that from 5000 ISO and up, you can notice slightly more noise in the E-M5 images. The E-M10 has a better rendering at extreme ISO speeds (6400, 12800 and 25600). Moreover, you may notice the gradual loss of colour fidelity (with a dominant yellow tint) on the E-M5 the more you increase ISO values. Since the sensor is the same, I guess the main differences are related to the image processor. The E-M10 has the same True Pic VII engine found on the OM-D E-M1, which would explain why I found the same results when I compared the E-M5 and E-M1.

Q: How does the 3-axis stabilisation work in comparison to the GX7 IS?

I compared the two cameras briefly inside one of my favourite camera stores in Turin (McDigital) as I don’t own the GX7 anymore. The two IS systems deliver very similar results. During the test, I held the two cameras without leaning against anything for support. The focus point was always on the Olympus marker of the E-M5. Down to 1/5, the results are very similar in my opinion, but if you go slower, the E-M10 seems to handle slower shutter speeds slightly better. However, in a real world situation, I think you can achieve the same results. And as I always say, the results of internal IS can be influenced by how still your hands and body are, or if you are leaning against a wall for stability, for example. If you take the necessary precautions and have the patience, you won’t see a huge difference between the two IS systems. Unfortunately, the GX7 IS doesn’t work for video.

Note: You can also check out our comparison between the E-M10 3-axis and the E-M5 5-axis stabilisation.

If we put aside scientific comparisons, I could summarise the comparison between these three cameras like this:

We can say that the three cameras deliver the same image quality (unless we really start to do some hardcore pixel peeping) and have pretty much the same AF performance. The Olympus cameras have a less cold colour rendering compared to the GX7, on which the settings need to be tweaked a little to achieve the optimal tones. All three are able to deliver excellent colours and overall image quality.

That’s an original question and I like that. 😉 I could compare many things but I am going to keep it short: the RX100M2 is a truly pocketable camera with a wonderful IQ. The AF isn’t as fast as the E-M10, nor is the internal stabilisation as effective, but it is truly a camera that you can bring anywhere with you without the need of a camera bag. That is for me the main reason to consider it over the E-M10. Otherwise, the E-M10 offers many more options, including an interchangeable-lens system.

Q&A about the OM-D E-M10 and various lenses

Q: How does the E-M10 AF works with Four Thirds lenses? Are there any improvements over the E-M5?

I tried the E-M10 with the Zuiko 12-60mm f/2.8-4 and the MMMF3 adapter, but unfortunately the AF is slower just like on the E-M5. For those interested in using FT lenses with OM-D cameras, the E-M1 is without a doubt the best choice.

Q: How does the new compact 14-42mm zoom perform compared to the previous M.Zuiko 14-42mm?

I had the chance to briefly compare the 14-42mm II R with the new 14-42mm EZ. The II R version seems to be a little bit sharper at 14mm than the EZ version, while at 42mm, the EZ version is slightly sharper than the II R. The EZ has a little bit more vignetting at f/3.5 and 14mm but it seems to handle flare better than the II R. Below you can see some homemade comparison shots.

I managed to briefly try the 20mm 1.7 in a camera store. The main difference is the AF. The 25mm is much faster, but the slow AF of the 20mm was already known. From 1.7 to 1.8 there isn’t much difference, but the M.Zuiko 25mm seems slightly sharper (even though the quick test I made cannot be considered exhaustive). Personally, your choice should be dictated by whether you need a fast AF or if you need those extra 5mm or not.

Q: Does the new 25mm deliver the same quality as the M.Zuiko 45mm?

Yes, absolutely. They share the same plastic build and reasonable price (actually the 25mm, being new, is more expensive for the time being). The quality is fantastic; they are both sharp at f/1.8 and razor sharp from f/4 and up. These are certainly two lenses I can highly recommend to every MFT shooter.

The performance is similar in terms of AF. I actually found the Lumix easier to use because it has a simple toggle on the side to zoom in or out, and it is faster than turning the electronic zoom ring of the Olympus (there is a little latency between the moment you turn and the moment it activates). Granted, the M.Zuiko has a better design.

I couldn’t do an extensive test for both lenses to see how the image quality compares but they look very similar.

Conclusion… and some missing answers!

There is one comparison I was very curious to do but couldn’t and that was between the new 25mm f/1.8 and the Lumix Leica 25mm f/1.4. I know that many asked for it, but unfortunately I couldn’t get my hands on a 25mm 1.4 sample.

There was also the compact zoom comparison between the Lumix 12-35 and Olympus 14-42mm which couldn’t be done either for the same reason.

I hope that I’ve been able to answer your questions, and that the answers will be of help to you. If you have additional questions, feel free to use the comment form below. I don’t have the camera or the new lenses with me anymore but I can try to answer based on my two-week experience with the gear.