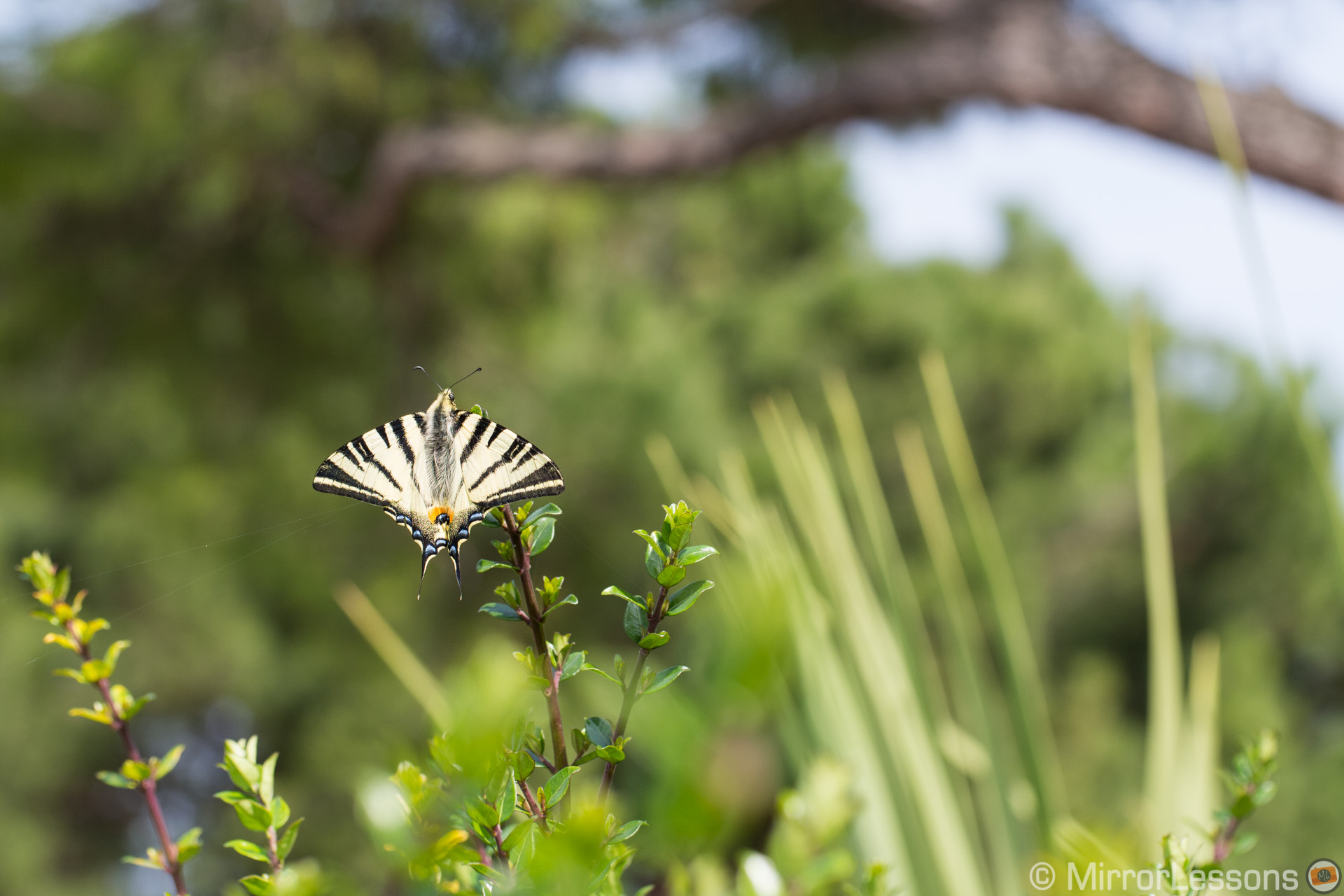 Despite the aches in my unaccustomed muscles, I knew I had to keep going. I had finally discovered one of the many steep woodland paths that wind up and around the notable colline (hills) of Turin. Though the unexpected solitude of the route made me trepidatious at first, I soon became mesmorised by the fauna and flora that had gone from dormant to thriving in a matter of days. The bustling city centre was only a stone’s throw away, but I felt as if I were wandering through a minute part of the world that the industrial hand of man had forgotten to touch.

And of course, where Mother Nature is left to her own devices, you’ll most certainly find an abundance of nature’s flying flowers – the butterflies. And find butterflies I did. It was the ideal setting to put my brand new M.Zuiko Olympus 60mm macro to good use.

Anyone who studies or photographs butterflies knows they are fickle creatures. In bright sunlight, it is rare to find one that will pose for more than a couple of seconds before flitting off to the next appealing rest spot or food source. This is why it is best to photograph butterflies in the very early morning, late evening or on a cloudy day, when their energy levels are low. However, with no sign of them in flight, you have to know where to look for them on the ground. This takes a great deal of field research, knowledge of their habitat and preferred food plants, practice and most importantly, the patience of a saint.

Whether you use Manual or Autofocus is very much a personal decision. Manual focussing will give you a degree of precision you won’t have with autofocus, especially when combined with the magnification feature found on some cameras such as my Olympus Pen E-P5, but it is much slower to work with. For the shot of the Small Tortoiseshell below, I was able to get very close and focus manually as the sudden chill in the air had rendered him immobile.

On the other hand, I found the AF-S Manual function on the Pen E-P5 very useful for shots taken in bright sunlight where the butterflies were more active. In essence, it allows you to quickly lock on to a subject with the autofocus, and then manually adjust as you see fit. In this case, it is important to remember the presence of the Focus Limiter Switch on the side of the M.Zuiko 60mm macro, as the autofocus will only focus within the limits you’ve chosen. For example, if you are trying to achieve a 1:1 macro shot of a butterfly’s eye, make sure the switch isn’t set to 0.4m to infinity, otherwise it won’t lock! It can seem a bit small and fiddly at first but once you get used to it, you’ll find it a very handy addition.

Something I love about this lens and had previously mentioned in my first impressions is its sharpness. In the photo of the Scarce Swallowtail above, you will certainly notice the clarity of the spider’s web running from the wing to the edge of the photograph – this is the kind of incredible sharpness you’ll see in any in-focus image from the 60mm macro.

In macro photography, the arrangement of the elements in the background is just as important as the subject, which is why an attractive bokeh is a must. Thankfully, the bokeh of the 60mm macro lives up to every expectation. The overall rendering is smooth and creamy, and the bokeh circles are round and pleasant to look at, especially at f/2.8, the fastest aperture.

Keep in mind that when photographing butterflies at a fast aperture such as f/2.8, a general rule of thumb is to capture them with their wings either flat open or tightly closed. Failure to do so may result in only half of the wings being in focus since the depth of field is so shallow. If the butterfly’s wings are at a 45 degree angle as in the case of the Orange Tip below, it is advisable to use a slower aperture such to bring more of the image into focus.

You may have noticed that the vast majority of my macro photos are not at 1:1 magnification, and this is a personal choice. I am much more interested in photographing butterflies within their natural context than simply taking close-up shots of their various body parts. That’s not to say the 60mm isn’t capable of such high-magnification shots – just check out Robin Wong’s review for confirmation – but I tend to find them less interesting. When I do use a very high magnification, it is usually for identification purposes as in the case of the caterpillar shot below.

I won’t lie – I’ve been on the verge of buying many a gorgeous macro lens (some larger and longer than my forearm) but my time with the M.Zuiko 60mm macro has convinced me that it is the best balance between price, quality, size and weight. In reference to the last two points, I spent a good seven hours walking up and down the hills in search of butterflies, often kneeling down in ditches and clambering up slopes to get my shots. With a lens any larger than the light and compact 60mm, I probably would have given up and gone home much sooner.

Do you own the M.Zuiko 60mm macro? What has your experience been? 🙂