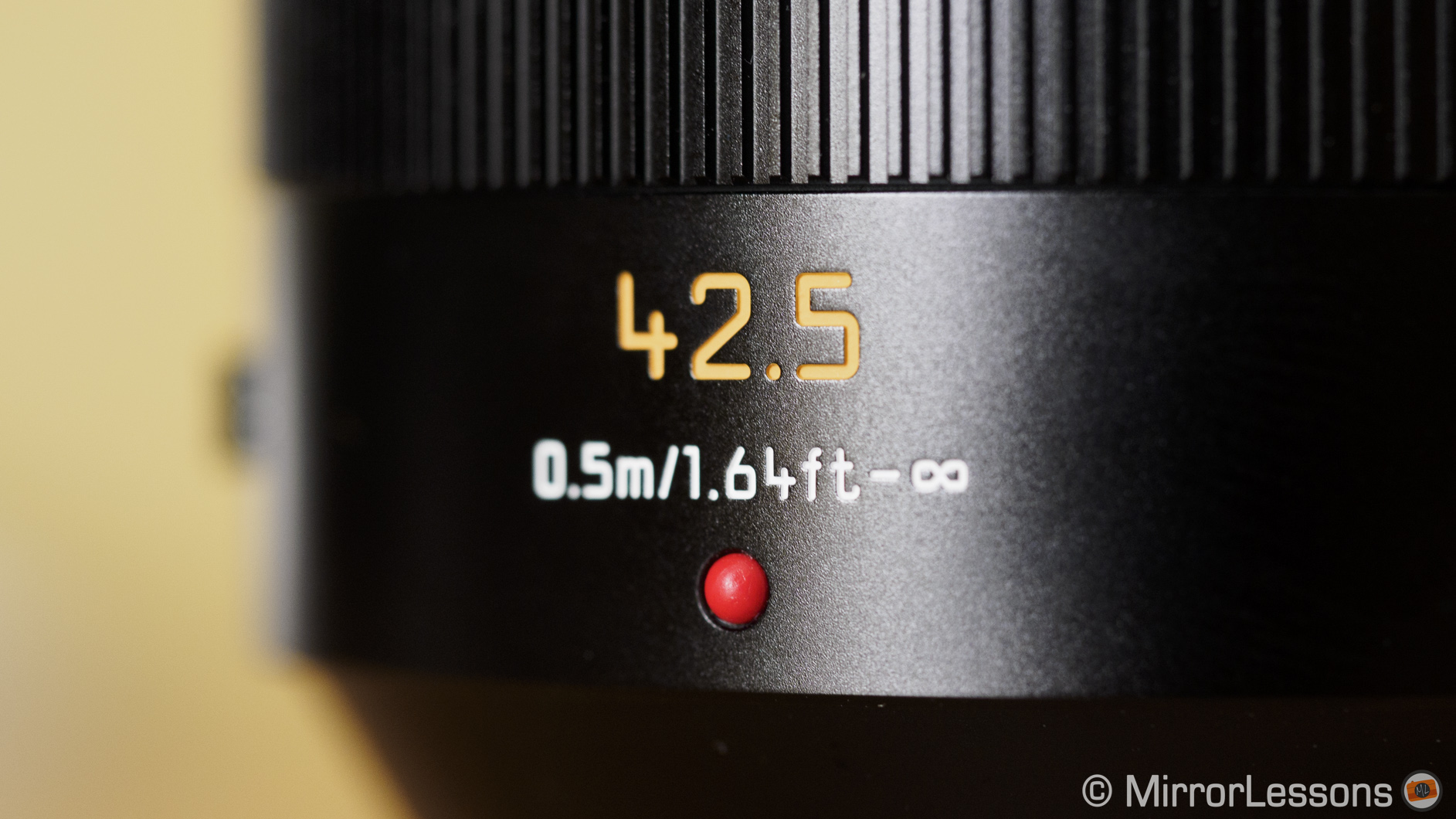 This year Panasonic released two new lenses designed by Leica for the Micro Four Thirds system. One of them cannot go unnoticed. Not only is it larger and heavier than your standard MFT lens, but it is also expensive. Actually, at the time of writing this article, it is the most expensive lens available for both Lumix and Olympus Micro Four Thirds cameras (until the next Olympus pro lenses come along).

The question is: does the Leica name add something distinctive to this new Panasonic-Leica Nocticron 42.5mm lens?

Let’s put things straight from the start: this isn’t an ordinary lens.

Right from the first time you hold it and mount it on the camera, you can appreciate the exceptional build quality. It is probably the best MFT lens if we consider construction alone. The body is entirely made of metal and, yes, it is big and heavy, especially when used with its protruding metal lens hood.

The lens features an aperture ring at the front that is both nice to turn and achieves a very good balance between smooth and sturdy.

Yes, you definitely get a little bit of that ‘Leica’ feeling in terms of build quality.

Unfortunately the aperture ring doesn’t work with Olympus cameras. You can turn it but it won’t affect the aperture, so you have to rely on the normal aperture dial on the body. Of course the aperture ring is fully functional with Lumix cameras. The lens features Power O.I.S. (Panasonic optical internal stabilisation) and also has a quick AF/MF switch on the side.

On the pure optical side, we get 14 elements in 11 groups. There are two aspherical elements that suppress spherical aberration and distortion, an Extra-low Dispersion element that increases contrast and sharpness and an Ultra High Refractive Index element that allows for a uniform look from edge to edge of the frame.

There are nine circular diaphragm blades that should reproduce the kind of smooth and creamy bokeh we love and expect from a f/1.2 lens.

But enough with the official tech specs and quoted sentences – let’s see some images!

The first thing you should do with an f/1.2 prime lens is to shoot at…you guessed it, f/1.2! Why? Because this fast aperture is probably the main reason why you wanted the lens in the first place. It should be mentioned that this is the fastest aperture lens for the Micro Four Thirds System in the AF lens category to date.

Yes I know, I’m showing another cat series to test a lens. I beg your pardon but these were the first set of pictures I took the first day I got the Nocticron, and I was immediately bowled over by the quality. We can see right from the beginning the very smooth and gradual transition between the focus point and the blurred background. The very soft tonal transition is also another a positive sign of this lens’ capabilities.

Another interesting aspect is how this lens is sharp at its fastest aperture. Look at the crop example below and judge for yourself. Both the definition and detail in the cat’s eye are impressive.

Below you can see other pictures taken with this lens at its fastest aperture including some portraits Heather and I took of each other. It would have been nice to have an actual model around to test a lens like this, but that’s the way life goes. 🙂

The f/1.2 aperture definitely seems to be the lens’ main strength.

There is very little vignetting at f/1.2 or traces of chromatic aberration. Moreover, a fast aperture like this can give interesting results regarding shallow depth of field, even though the subject isn’t very close to the lens. The capacity of a lens to detach the subject from the background is another characteristic that I like to put to the test. Of course you’ll see a more impressive result with an equivalent focal length on a full frame sensor but if I skip the obvious, I can say that this lens offers interesting capabilities for a smaller sensor like MFT.

When you start to stop down, sharpness becomes even very impressive.

When used at its smallest apertures the Nocticron is capable of producing excellent sharpness at the centre and in the corners. I didn’t try it at every aperture as I feel that having sharp edges at f/1.2 or f/2 matters less.

The 42.5mm focal length naturally puts the Nocticron in the portrait lens category. In this sector, one of the only real rivals is the Olympus 45mm f/1.8, a lens that costs 5 times less and is known to be the best “value for money” available for the MFT system. There is also the Voigtlaender Nokton 42,5mm f/0.95 but unfortunately I don’t own it. So, what happened when I compared the Nocticron with the 45mm?

Note that I didn’t perform a scientific comparison. I simply shot the same subject with the two lenses to see if there was a serious difference in a real world situation.

In the two examples above, the first thing to notice is the difference in colour rendering. The Nocticron seems to render warmer colours and produce less magenta in the skin tones. But please keep in mind that the sunlight on that day was often changing and that might have altered the results a little.

Regarding sharpness, the Nocticron wins hands down at f/1.8.

If I compare both lenses at their fastest apertures (f/1.2 on the Nocticron and f/1.8 on the M.Zuiko), the Nocticron has a 1 stop advantage and still beats the 45mm regarding sharpness but the difference is less noticeable.

When we compare both at f/2.8, the difference regarding sharpness is less pronounced.

Below are another couple of examples taken at f/1.8.

The bokeh rendering of the Nocticron appears more creamy and delicate to me but the difference isn’t that huge. I can certainly say that the lenses appear to give similar results and that the differences are subtle. Regarding AF performance, the 45mm performs better on the E-M1 especially regarding accuracy. In the picture where Heather is standing under the porticos (not the close up), more than one shot ended up out of focus with the Nocticron, but only in that specific example.

So, is the Nocticron better than the M.Zuiko 45mm and which one would I recommend?

Yes, the Nocticron is better, but that doesn’t surprise me because of the design and price difference. Your choice will also depend on how you intend to use the lens. For me, the Nocticron 42.5mm is both a very specific and professional lens. If you are shooting portraits for a living with MFT, this is definitely the lens to consider. If you are an enthusiast, go with the 45mm because, in the end, you probably don’t care about these small differences. You will also have the advantage of a more compactly-built lens and less weight. It is as simple as that.

Performance and other uses

The Nocticron is indeed a portrait lens at heart but it also performs very well when it comes to autofocus and optical stabilisation. During my Fuji X-T1 AF test, Heather tested the Nocticron lens capabilities with the OM-D E-M1 in a sporting environment. Overall the results were very good, though the focal length was somewhat limiting in many situations. This said, the fact that the lens performed well is proof that it can be more versatile than one might think.

The lens passed the AF test on the OM-D E-M1 even with AF-C and tracking. We didn’t perform a comparison test with a GH4 or GH3 but since I noticed that the 45mm was more accurate on the E-M1, I wouldn’t be surprised if the opposite were true on a Lumix body with the Nocticron. The important thing is that the 42.5mm works fine on both brands of camera, with the only real limit being that you can’t use the aperture ring on Olympus bodies. Regarding O.I.S., I did a quick home-made test with the Lumix GH3 and the lens seems very capable on this front as well.

I also got the chance to test the lens briefly for video on my GH3 but for an assignment I cannot share publicly. The lens behaved as you would expected on a Lumix body and is certainly very interesting for situations where portraits are necessary such as interviews, close ups or other details.

Conclusion: A lens for professionals

Concluding this review is actually very easy for me. The Panasonic-Leica Nocticron 42.5mm f/1.2 is a very high-level lens that portrait photographers and videographers can certainly appreciate. The build is wonderful, the image quality is wonderful. I have not had enough experience with Leica lenses to state whether this Nocticron is in the same ballpark, but it does have true character, something I’ve seen rarely in other MFT lenses. Is it worth paying the high price? For me, the answer is simple but I will repeat myself.

The lens is worth considering if you are a professional portrait photographer who shoots with MFT cameras or a professional filmmaker who uses Lumix bodies for video. Otherwise, a cheaper alternative such as the 45mm will suit you better.

Enjoyed this article? If so, you may also like:

Which is the best Micro Four Thirds camera for 2013?

The best Micro Four Thirds lenses for your Olympus or Panasonic