You are here: Home / Galleries / Through the Cat’s Eye – A Sony A7s High ISO Mini Project 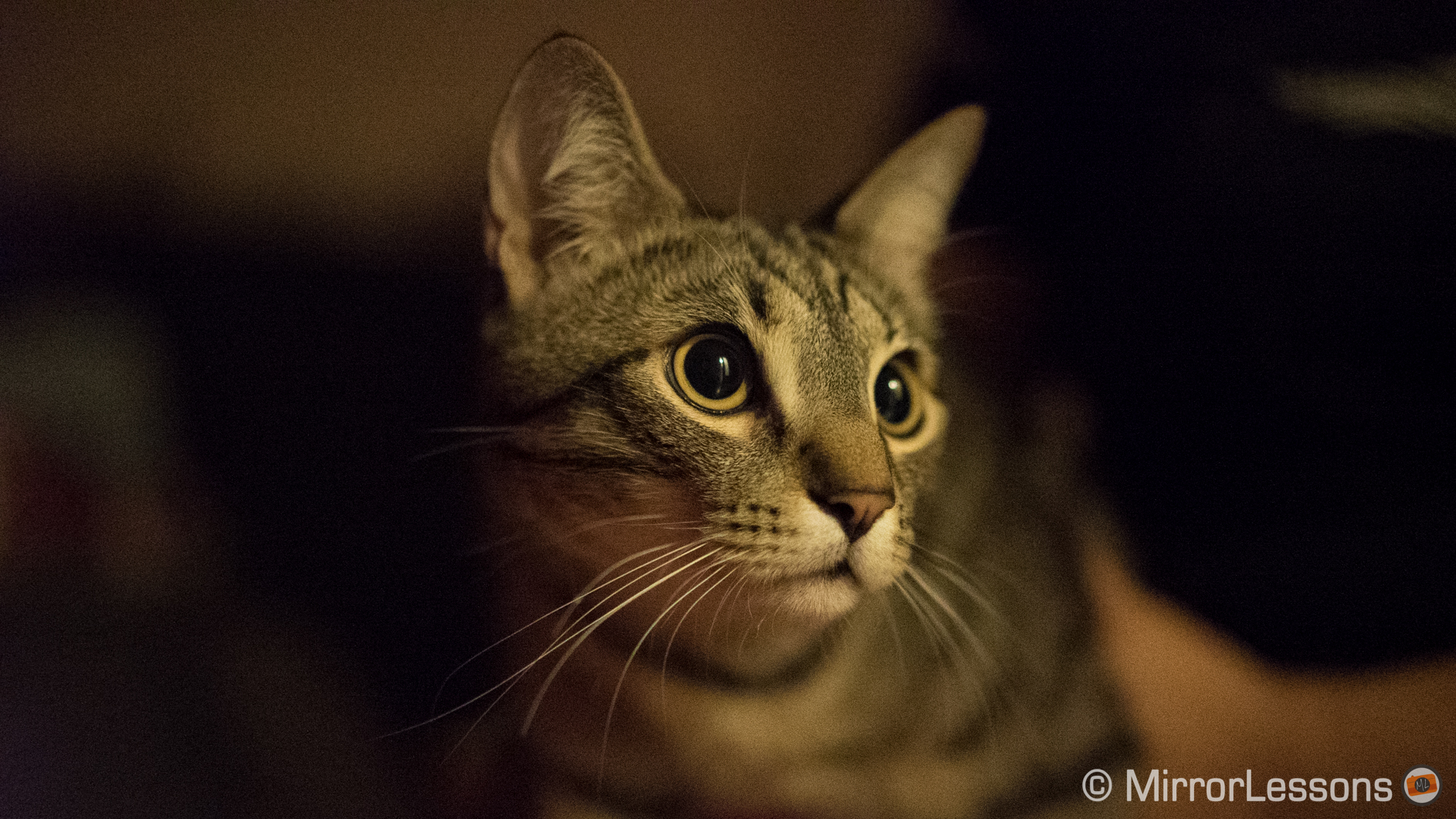 Do you see anything special about the cat portraits below? If not, I won’t be surprised or offended. At first glance, we have a series of simple images of the most photographed animal in the world in its natural home environment. Many of the photos appear to have been taken during the day, with light streaming in through the windows.

However, the eyes of the cats tell a very different story. Any cat owner will be able to tell you that when a cat’s eyes are exposed to light, the pupils will contract to a slit-like iris to protect the sensitive retina.

As such, if you want to capture a cat with dilated pupils, you must photograph it in relatively low light, specifically an environment where all artificial lights have been turned off and where there isn’t any light coming in directly through the window. As you can imagine, the situation can be very challenging.

First, cats tend to be fidgety animals when they aren’t dozing. They will rarely look directly at the camera, and when they do, you’ll only be able to hold their gaze for a fleeting second before they turn their back on you. For this reason, you may end up with a blurry image if you use a shutter speed below 1/100 of a second.

Second, many sensors deliver reasonably good high ISO performance up to 3200 or 6400, but in very dark conditions, this isn’t enough especially if you want to keep your shutter speed at 1/100 or above. A fast aperture lens will help but you may be forced to raise your ISO to 12800 or even 25600 to achieve a properly exposed and in-focus image, which will result in a lot of unpleasant noise.

In short, photographing cats with dilated pupils in low light is hardly a walk in the park. It takes a special kind of camera shoulder the task, and that camera is the brand new Sony A7s.

The Sony A7s has an incredible ISO range of 100 to 409,600, a figure that can only be rivalled by a few top level DSLRs such as the recent Nikon D4s. Whereas the average camera produces files that are useable up to 6400 ISO, the A7s easily prevails with a useable high ISO of 51,200 (check out our first impressions article here). Should you decide to stick with lower values such as 3200 or 6400 ISO on the A7s, you will find that they are as clean as 800 ISO would be on any other recently-released camera.

To demonstrate the power of the Sony A7s, Mathieu and I decided to develop this small project. Our goal was simple: to take portraits of cats with dilated pupils and make them look as if they had been taken in better light conditions than they actually were.

We came across different lighting conditions depending on the room and the time of the day. In the first set of photos with the white cat named Taddeo, the sun was hitting the window. Even with the blinds closed, some light seeped through. This was the setting where we encountered the most light and even though the pictures were taken at 8000 ISO, they are very clean and it appears that there was far more light than there actually was.

In the next set of pictures, there was less light. It was in the afternoon and the rooms weren’t exposed to any sunlight due to the blinds being closed. The source of light came mainly from the nearby rooms. The last picture at 102400 ISO looks like it was taken with bright sunlight coming in through the window but the reality was quite different.

The next set was shot in the evening, with no light whatsoever coming from the windows. The room was dark and the only light source was coming in from the kitchen through an opaque glass door. There was also a short dark corridor separating the kitchen from the room.

The last setting was the darkest. It was early in the morning and the small apartment didn’t receive a lot of natural light. The blinds were closed and even the cat itself was black!

While certain pictures taken at 102400 ISO have a little too much noise, some other examples are just darn impressive. Moreover, the degree to which you notice noise is very much dependant on how dark the subject and environment are. For instance, noise is much less noticeable in the photo of Marigold (our orange cat) sitting on the poster of Al Pacino than in the pictures of the black cat, even though the ISO speed was the same.

I should also add that the AF behaved very well in most situations. It had more difficulty in the final examples because the subject and environment were as dark as could be. We sometimes used the silent mode so that the shutter noise wouldn’t distract or scare off the cats.

We already knew that the A7s was a low-light monster, but unless your aim is to photograph cats in the dark as we did, you may wonder what other real world situations there are where the camera could be of real benefit.

Well, we feel that it could be the ideal tool for photographers who often find themselves shooting in challenging light conditions.

Think wedding photographers during the father-daughter dance or after-party were lights are almost completely off, or macro photographers who require a slow aperture and relatively fast shutter speed to keep everything in focus. Flash photography too can benefit from this in some cases such as when you want to illuminate someone and keep all the ambient light there is around. All you have to do is set your minimum and maximum ISO, and choose Auto ISO. The camera will do the rest.