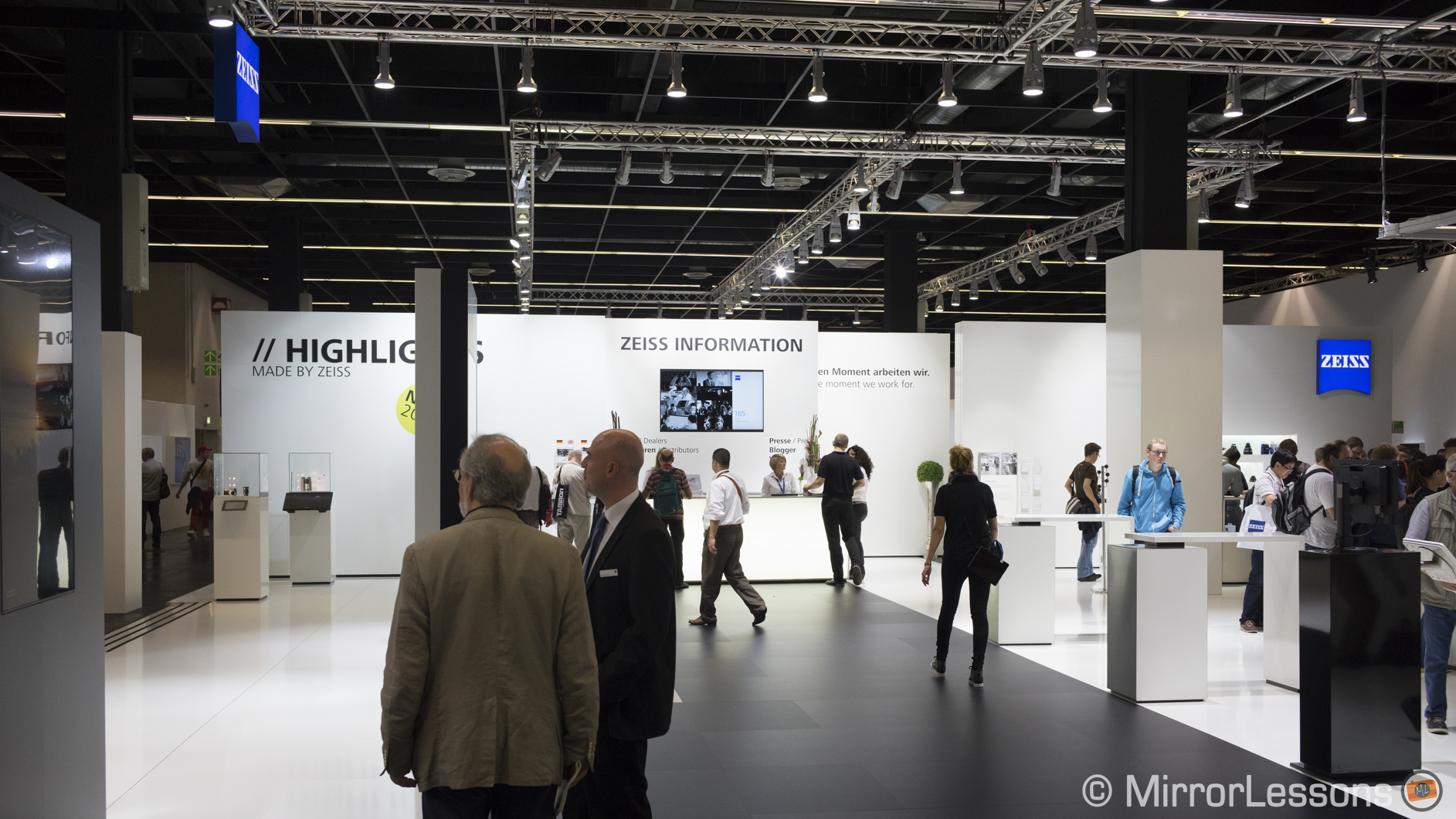 The third interview we had the chance to hold was with Zeiss product manager, and designer of the two Loxia and ZM lens for Leica, Christophe Casenave. It was extremely interesting to hear him speak about the various lenses Zeiss has designed for the Sony E-mount and Fuji X mount so far. Happily, he also let us try all three new lenses (the Loxia on the A7r/A7s and the ZM on the Leica M240) around the Zeiss stand where there were a few colourful displays. Our first impressions article is now online!

MirrorLessons: Many people were surprised to see that the first two Loxia lenses for the Sony FF system are focal lengths that already exist with Sony’s autofocus lenses. Why did Zeiss choose to begin with the 35mm and 50mm?

Casenave: Simply because it’s not all about the focal length. The Loxia are completely different; it’s the start of something. It’s a new family, completely different not only due to the fact they are manual but also because the typical manual lens Zeiss look is different from anything else. If you read people who like Zeiss lenses, they are sometimes quite subjective in how they describe them, but they love them because they have something special and this is really at the core of this Zeiss look. As such, these lenses are definitely not targeting the same user. Even if someone bought both, they would not use the Loxia for the same thing that they would for the Sony Zeiss lenses. It’s a completely different usage and as such, we chose to start the new family with the core of the portfolio being the standard 50mm and the reportage 35mm. And of course we will extend the line-up but we decided to start with these ones. If you think about what’s special about these lenses and what makes them really different from the autofocus lenses, it is that you have the manual focus with the 180 degree with hard stop, an aperture ring which is fully mechanical, and then we have included for the guys who like to make photos and video this de-click feature that allows you to drive the aperture ring in a noiseless, stopless way. They simply target completely different customers, and it’s good to start with the core of the portfolio.

MirrorLessons: How does the mechanical deactivation of the click stop work?

Casenave: If I remove the lens, there is a small screw. When the small points are not matching, it is in de-click mode. If I take a screwdriver or the small tool we deliver in the box, I can turn it by 180 degrees and it will be in the click mode. So I can use the same lens for both video and stills.

MirrorLessons: So the user can change that himself?

Casenave: Yes. When Sony launched the Alpha 7 system with the focus by wire lenses, and we launched our Touit, we obviously received feedback about what people liked and disliked. And a lot of people said, “Hey Zeiss, you are known for lenses that still have a distance scale, aperture ring, aperture scale, depth of field scale. Why doesn’t it exist on the Touit and Sony Zeiss lenses?” And we noticed all this feedback, and said “Okay, there is a small group of people who care about this.” So, we decided to make them happy. Also, it is much better to make video with a manual lens, so we decided to push the envelope a bit more. We have this extreme knowledge of the cinema – Zeiss is a market leader in cinema lenses – we know exactly how to make them, so I just have to go next door to ask if it is something useful or not.

MirrorLessons: I read somewhere that you have to pay $28 for an upgrade to have the Cine version.

Casenave: No, this is not the case. Basically, you can use whatever screwdriver fits, but in the box you will also find a small tool. If you lose it and you still want the original, we will sell a pack with five copies of this small tool for $28. But you don’t need to spend that money.

MirrorLessons: How have the Touit lenses been received so far?

Casenave: Well, the Touit lenses are excellent lenses in terms of optical quality and they have been received as much. We haven’t read many negative reviews but there have been some small points as I explained to you. Our core customers mentioned the lack of an aperture ring (for the E-mount version) and depth of field scale. But otherwise, there’s been quite a nice reception.

MirrorLessons: Are they more successful for the Sony E mount or Fuji X mount?

Casenave: I think they’re doing well on both sides. The 12mm is really the thing people expected from us, so it’s been extremely well received for both mounts.

MirrorLessons: The Micro Four Thirds systems is perhaps the most complete system as of now. Is Zeiss still not willing to design lenses for the MFT mount, and if not, why?

Casenave: So, we have lenses for Micro Four Thirds, the compact cinema lenses. So you can use them with all mounts including MFT because MFT is quite popular amongst starting filmmakers. So we have the compact primes that are compatible with MFT. For now, we have no lens line-up compatible with MFT. It’s a bit of a portfolio decision. There are lots of things you’d like to do, but you have limited resources and power so you need to concentrate on one thing. We are concentrating on one hand on the ultra high-end SLR side with the Otus, simply because we think the “big guys” (Nikon and Canon) forget to deliver adequate lenses for the bodies they are generating. Then of course the E-mount is very important to us because we are quite complementary and we have a nice relationship with them. And also we believe it is a mount with a bright future, so this is our key focus at the moment.

MirrorLessons: I read somewhere that for Zeiss, the MFT system wouldn’t give the possibility to build very high quality lenses as they do with other systems. In fact, MFT users always wonder why Zeiss doesn’t make MFT lenses for still photography.

Casenave: Zeiss has no limitation in optical design but we can’t do everything. One thing we can’t make is excellent lenses with less money. Zeiss cannot bring lenses on the market that are not excellent simply because no one would buy them. If I’m looking at Zeiss, I expect excellence, so we concentrate on this. As we don’t know how to build excellence with less money, we will not do it. At the moment, the MFT system is quite valued, but as for the willingness to spend big money on lenses, to see this as an investment as you do on a SLR, we are not 100% sure it is there. On a full frame SLR system, the lens is really the investment part. The camera is what you change, and people are used to this. In the case of less-than full frame systems, we still don’t understand.

MirrorLessons: Since you produce lenses for both DSLR and mirrorless systems, what is your option on the increasing interest in mirrorless cameras from professional photographers?

Casenave: SLRs still have a nice future. What might happen is that the amount of people using purely SLRs will decrease, but those guys that stick with SLRs will be much higher profile. So, clearly high-end SLRs will stay, and will be perceived as the high-end system. There are tons of professionals who tell us everyday that they want to have their SLR in their hands. It’s not only about the megapixels, but it’s also a tool. They like feeling they have a tool in their hands, and they like it bigger. That’s why this kind of camera will still live for a long time. When it comes to mirrorless, it’s probably a very future-oriented system. It will gain momentum and the brands are increasing the quality level from model to model. It started as a consumer product but now we are almost up there with the pros, and this will of course continue. For us, it is a system that is extremely important, especially the full frame system. Probably there will be a nice future for both systems–one more specialised and very high-end, and the other getting a share of different segments.

MirrorLessons: I ask the following question out of pure curiosity. Has Zeiss ever considered producing a digital Ikon camera? Would there be a market for it?

Casenave: Can I ask you the same question? Will there be a market for it? It’s a question I should be asking you, as product manager.

MirrorLessons: Well, there are two full frame systems–the Leica system and the Sony FF system. The Leica system is something a lot of people desire but it costs a lot of money, and with the way it is made, they are targeting a very specific type of user. And with the Sony FF system, my perception is that suddenly people see the opportunity to have a compact full-frame camera they can use with many different lenses. It really attracts the attention of a lot of people, and the great thing is that people can really choose the lens they prefer, and don’t have to rely on one brand for a lens.

Casenave: What would be the digital Ikon camera? Would it just be the name, or a true rangefinder camera?

MirrorLessons: Similar to the Leica M.

Casenave: That would be quite a specialised thing. There would be lots of constraints, lots of things you can’t do. Probably the guys who buy the Zeiss M lens, are the guys who use the M really heavily. There might be people who would consider a small luxury product, but I am not sure if there are enough pragmatic rangefinder users in this world to justify non-luxury brands entering this market. Because Zeiss isn’t a luxury brand. We never overprice our lenses and you pay for what you get. We are talking about the Otus at €4000 but you get something really fantastic. You really have something for your money and it’s the best price we can give. I’m not sure if a digital rangefinder camera would have a big enough market.

MirrorLessons: Thank you very much for your time!