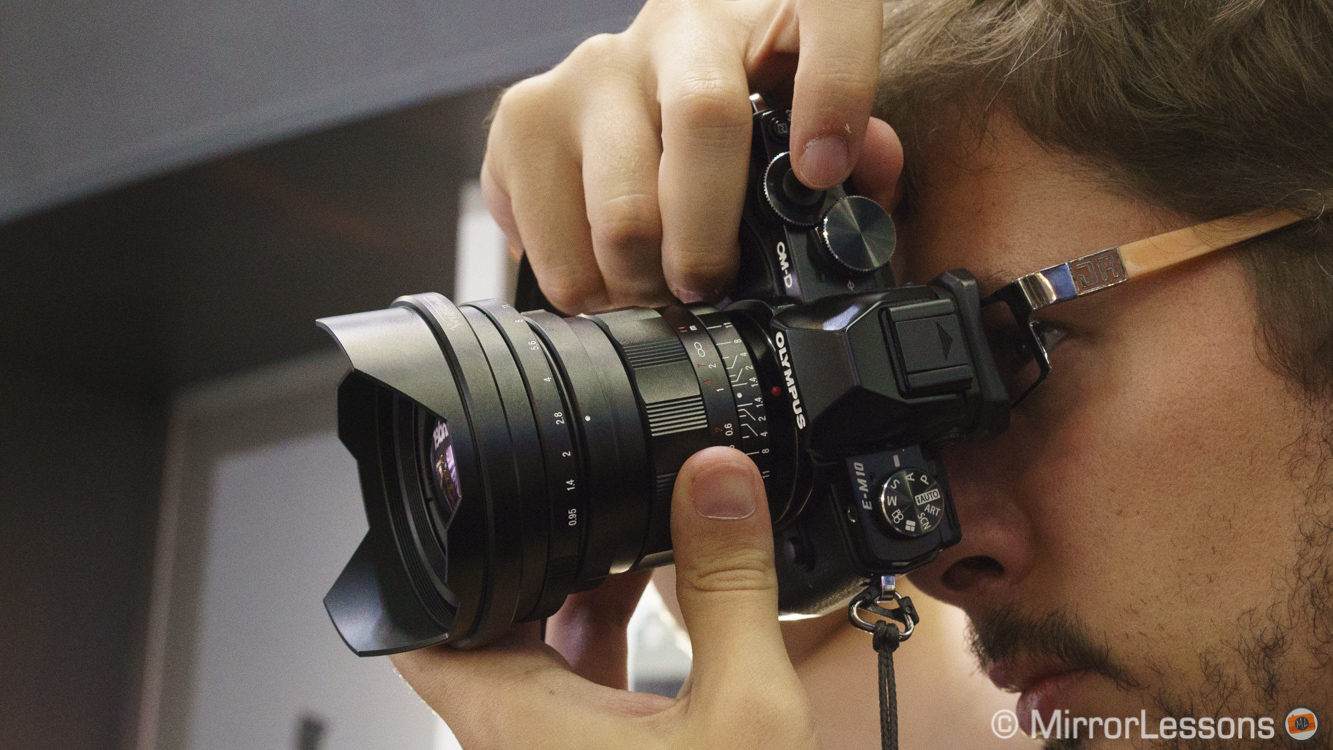 After trying the new Leica Summarit-M, the Mitakon Speedmaster 50mm f0.95 and the Samyang 50mm f/1.4 on the Sony A7s, our hands-on with manual focus lenses continued when we stopped at the ZY Optics booth a second time to test their new lenses for Micro Four Thirds. We also popped by the Voigtländer booth to get a look on the new 10.5mm f/0.95. 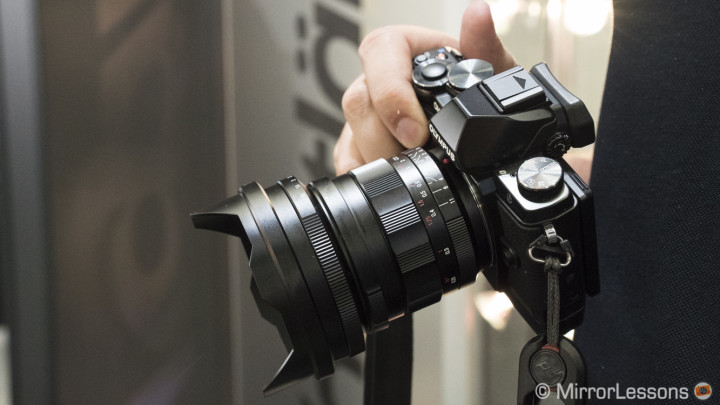 The new Nokton lens is the fourth designed by Voigtländer for the MFT mount and features a very bright f/0.95 aperture like the other lenses in the series. The formerly German brand has made its MFT line more complete with the release of this 10.5mm, which corresponds to 21mm on a full-frame sensor. It also becomes the fastest wide-angle lens available as of today for the MFT system.

Like the other Nokton lenses, the 10.5mm features an all-metal solid build quality. The aperture ring is found on the front of the lens and is smooth to turn with a click-stop mechanism. The focus ring is also smooth with a very good grip thanks to the small depressions with ridges. The hyperfocal scale is also included. The lens is supplied with a metal hood featuring a twist-lock mount. Its weight is 586g which is almost the same as a Panasonic GH4 so it is certainly an heavy prime lens for MFT! 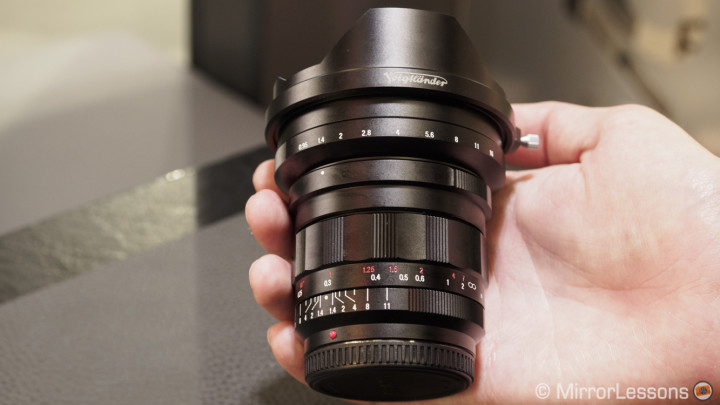 On the inside, the lens has 13 lenses in 10 groups with an aspherical element and a 10 blade iris. The 10.5mm can focus as close as 17cm. The first Nokton, the 25mm, was very soft at f/0.95 but with the following releases Voigtänder has improved the performance at the fastest aperture and the 10.5mm shows good results even at 0.95. We can detect some vignetting but it can be expected with this type of lens. Below you can find a few sample images taken with the OM-D E-M10. They aren’t the best photos to judge the quality of the lens, but it was the best we could do given that we were standing at a Photokina booth.

I praise the work and effort Voigtländer is putting into developing a nice series of very fast lenses for the MFT system. I enjoyed using the 25mm for both portraits and video work. Even though it is too soft at 0.95, it provides a very nice look to the images and also gives you more depth of field. They are lenses that are nice to use for both stills and video. Especially in the case of the latter, they can give an interesting cinematic look to the footage. 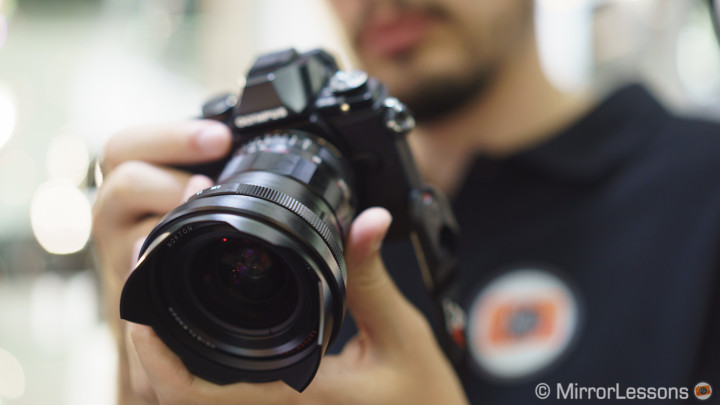 There isn’t any information yet regarding the price and precise date of release but we know it should be next year.

The two lenses were recently announced on September 14th and are available for MFT, Sony E and Fuji X mount. They have been designed for APS-C sensors but not full-frame sensors. The equivalent focal length is approximately 64mm and 35mm respectively.

Both lenses feature an all-metal build. With the 24mm I honestly find the aperture ring too close to the mount and a little bit uncomfortable to reach and turn. The aperture ring on the 42,5mm is on the front end of the lens and easier to use. Both lenses have a nice focus ring.

The 42.5mm f/1.2 is an attractive alternative to the expensive Panasonic Leica 42.5mm. It is smaller and lighter but doesn’t have autofocus or optical stabilisation. It features 9 elements in 7 groups, 9 diaphragm blades and has a minimum focus distance of 45cm. We were able to take a few samples with our camera. I found the results at the fastest aperture soft with sharpness increasing from f/2. At its fastest aperture, it also seems to suffer from chromatic aberration. We must remember that they were pre-production samples, though very close being finalised according to ZY Optics. When stopped down to f/4, the lens gives better results in terms of sharpness.

The 24mm f/1.7 has 9 elements in 8 groups with 12 diaphragm blades on the iris. The minimum focus distance is 15cm. The results seem very similar to the 42.5mm in terms of performance and again I find it soft at the fastest aperture.

I know I am repeating myself throughout the different Photokina articles but booths are rarely the ideal place to test a lens properly. The Voigtländer Nokton 10.5mm seems to be a good lens and could be a very good wide-angle alternative for MFT users. 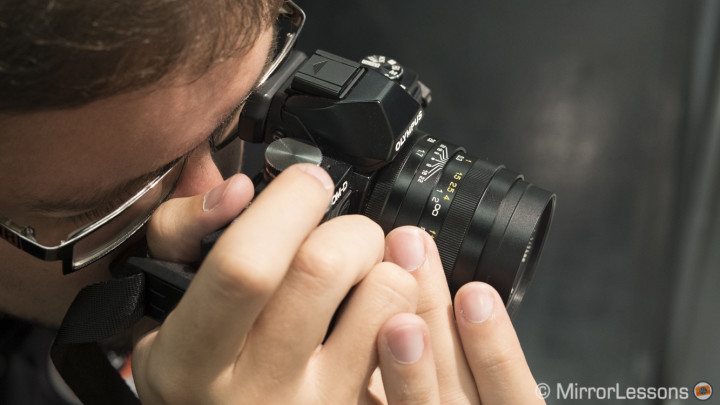 The two ZY Optics lenses are interesting, and I hope to get my hands on the final versions to make a final judgement about the image quality. They are light and small, meaning that they fit MFT cameras perfectly in terms of design. Their price is also very attractive (less than $400 each) but for you to choose them over the 42.5mm or the M.Zuiko 45mm f/1.8 for example, their performance at 1.2 or 1.4 would have to be excellent.